In mid-June 2019 Dame Tariana Turia called on the Chief Executive of Oranga Tamariki, Grainne Moss, to resign. She disputed that Maori children are six times more likely to be abused than non-Maori children, and called the rate of uplift by Oranga Tamariki “overkill”.

“In the last few years since 1993, we have had 83 non-Māori children killed, we have had 17 Māori children die, so the fact of it is this is an overkill when it comes to Māori families. Now if you don’t want to call it racism, you can call it what you like.”[i]

The legitimate source for child death statistics is the Family Violence Death Review Committee[ii]. Here are their most recent findings: 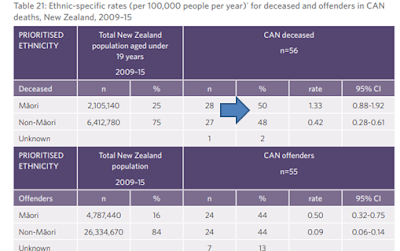 Slightly muddied by the fact that the first set of statistics represent children under 15 and the second set, children under 19, combined they show that a total of 105 children (or youth) lost their lives in CAN (Child Abuse or Neglect) deaths over the 14 year period and 51 (49%) were Maori, a significant over-representation.

I take no pleasure in these stats but if erroneous data is put about, responses can be just as misguided. Maori may rightly feel aggrieved if their leaders paint a picture of injustice and inappropriate actions by the state – which is exactly what happened.

Late in July 2019 the ‘Hands Off Our Tamariki’ protest took place in the grounds of Parliament. Protestors raged against the uplifting of ‘their’ children by Oranga Tamariki, many calling for the resignation of the Minister and Chief Executive.

That’s not true either. The state tries very hard to keep children within their ethnicity, if not whakapapa links. It even measures achievement of this goal:

‘Green Party co-leader Marama Davidson, who attended the protest with a host of other MPs, said the “torture and abuse” at the hand of the state must stop.’

This implies that children in state care are being directly and horribly harmed by agencies of the state – another mistruth.

As at the 31st March 2019 there were 6400 children and young people in care and protection custody and 170 young people in youth justice custody of the Chief Executive of Oranga Tamariki.

Children in care are defined as being subject to a custodial order or legal agreement under the Oranga Tamariki Act in the care or custody of the Chief Executive of Oranga Tamariki.

The last statement is included to clarify the status of children ‘in state care’. While these children are ultimately the legal responsibility of the state they are not necessarily in the day-to-day care of the state.

“Oranga Tamariki deputy chief executive Hoani Lambert said the majority of the harm to Māori children happened in placements where they had been left with their family.”

Oranga Tamariki is now front-footing the issue probably due to biased media reporting. For instance, Michelle Duff (DomPost, March 28) wrote about the 220 children abused “in state care”, who were “…taken from their families, from their homes, to a place that’s meant to be safer”.

They were not uniformly taken elsewhere. Many were left with or later returned to their family or other family member.

No abuse or re-abuse of children is acceptable. But the facts show that family members and parents posed the greatest danger to these victims. This suggests that where the state primarily fails is in poor decision-making and monitoring of risk.

Which calls into question whether the very best interests of the child are being put first and foremost.

With adoption now a rare event, are potential caregivers being locked out who, despite being the wrong skin colour, would make safe, stable and above all, loving parents?

Doubtless, cultural background and whanau links will become questions of importance for these children in time but immediate security must surely be a priority.

My thoughts will be regarded as sacrilege by some. Exactly why, I’m not sure.

Oranga Tamariki has a duty to protect life. That is their first responsibility. They are New Zealand’s child care and protection agency. All other considerations are secondary, including ethnicity of child and potential caregiver.

Returning to Green co-leader Marama Davidson and her incendiary statement that “torture and abuse” at the hand of the state must stop.

If abuse at the ‘hand of family’ were to stop, Oranga Tamariki, the focus of all this recent venom, wouldn’t need to exist.