A Contest of Ideas 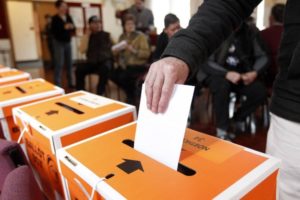 “I have never understood why it is ‘greed’ to want to keep the money you have earned but not greed to want to take somebody else’s money.”
– US Economist Thomas Sowell

The election that started out as the Labour Party sleepwalking to victory on the back of the Covid-19 crisis has become a contest of ideas.

In the red corner are Labour and the Greens promoting higher taxes, less freedom, and more State control. In the blue corner are National and ACT championing lower taxes, more freedom, and less regulation.

Setting aside the matter of the wasted vote going to parties that will not reach the 5 percent MMP threshold, the latest Colmar Brunton poll puts Labour on 47 percent, the Greens on 6 percent, National on 32 percent and ACT on 8 percent. The significant 13-point difference between the two blocks makes an election victory for National extremely unlikely, but not totally impossible.

The polling gap is largely the result of some 200,000 former National voters – mostly women over the age of 45 – switching their support to Jacinda Ardern for her management of the Covid-19 crisis. If enough of those voters returned ‘home’, Labour’s support would slide and if the Greens dipped under 5 percent, National and ACT would have the numbers to govern.

The election result therefore hinges on whether Jacinda Ardern can hold onto those former National voters, or whether Judith Collins can attract them back.

While some of the policy stances taken by the main parties are not too dissimilar – see the Herald’s summary for an excellent review of policies – others give voters a clear choice.

One such area of significant difference is tax and the economy.

With the country in a recession and facing a mountain of debt, boosting economic growth is a priority. This raises questions over whether higher taxes and more government spending is the most effective approach to growing the economy, or whether freeing up the private sector to invest and create wealth through lower taxes and less regulation delivers a greater economic benefit.

Essentially, Labour and the Greens are proposing higher taxes because they believe they know best how to spend your money. In contrast, National and ACT want lower taxes to allow families to keep more of what they earn so they can use it to build a better future for themselves – and the country.

Labour is promising a higher tax bracket of 39 percent for those with incomes over $180,000, while the Green Party, in what has variously been described as a ‘bottom-line’ and ‘top priority’ policy in any coalition arrangement, not only wants higher income taxes but a wealth tax as well.

The Greens are proposing two higher tax brackets of 37 percent from $100,000 and 42 percent from $150,000, along with a wealth tax payable each year of one percent on all assets – including the family home, bach, land, and super savings schemes (even if they are held in family trusts) – valued at over $1 million, with 2 percent on assets over $2 million. Those who are asset rich but cash poor – including many farmers and pensioners – will be expected to borrow to pay the tax.

In comparison, tax cuts form the basis of a growth agenda being promoted by National, which is promising to lower income tax thresholds to effectively give middle New Zealand an average of $3,000 a year. ACT supports tax cuts, but would like to see taxes flattened further to 17.5 percent in the longer term.

Labour’s response to the promise of tax cuts has been to go on the attack. Their strategy is to scare voters with claims that tax cuts will result in less funding for health and education. But that is a lie. Tax cuts target ‘wasteful’ public spending – and under this Labour-led Government, there has been plenty of that.

Many projects of dubious benefit have been financed by the Government’s $3 billion Provincial Growth ‘slush fund’, which has been liberally splashed all around the country.

The same can be said of the $3 billion ‘shovel ready’ Covid recovery fund. Vast amounts of taxpayers’ money is being ploughed into hastily assembled and poor quality projects, like the $12 million allocated on the recommendation of the Green Party’s co-leader James Shaw to an elitist private Green School that charges New Zealand students almost $30,000 a year in fees and international students $50,000.

With the Minister for Arts, Culture and Heritage, Jacinda Ardern, pouring hundreds of millions of taxpayers’ dollars into the creative sector, there are growing concerns that the Government is using the Covid crisis as a pretext to “do special favours for their favourite interest groups”.

Questions have also been raised about the value for money of some of the 647 grants worth $16 million that have been allocated by Creative NZ under the PM’s new Arts Continuity fund, including $13,000 to research and write the first draft of a novel about male affection in hypermasculine spaces, $17,798 to fund poetry that explores indigeneity and love in the time of climate change, and $26,000 towards a novel about the collapse of democracy in an association of alpaca breeders!

Was the architecturally designed slide on Parliament’s lawn that over-ran its $400,000 budget to cost over $570,000 a good example of prudent spending by this Government?

Concerns have also been expressed about Labour’s expansion of the core public service over the last three years – not only have they significantly increased the regulatory burden on New Zealanders, but they have added more than 6,000 staff to create a 53,000-strong bureaucratic army. Reducing it back to 2017 levels would save around half a billion dollars a year.

With Labour’s love of regulation and bureaucracy, nothing epitomises the difference between the two main parties as starkly as farming policy.

National’s leader Judith Collins has accused the Government of regulating farmers “into oblivion” leaving them “feeling like they are bagged all the time by this government”.

During their time in office, Labour has piled regulations and costs onto the agricultural sector through new health and safety standards, animal welfare and biosecurity requirements, the Zero Carbon Act, a strengthened Emissions Trading Scheme, restrictions on natural gas, increased regulations on waterways fencing, fertiliser, fresh water, winter crop grazing, and even attempts to control the amount of mud on a farm in winter.

To cap it off, Labour’s requirement that everyone earning a living from the land must develop farm plans for annual inspection have been estimated to cost the industry over $100 million.

Under pressure to reduce the cost burden they have forced onto the agricultural sector, instead of promising to get rid of some of their over-the-top regulations, Labour has pledged to use $50 million of taxpayers’ money to subsidise the cost! In effect, they are turning farming into a regulated industry, totally beholden to bureaucrats.

In comparison, Judith Collins aims to encourage innovation, rather than constrain the sector with excessive regulation, by promising to review and repeal unwarranted requirements, including the need for farmers to obtain consents to farm.

She says farming will not be included in the Emissions Trading Scheme, and the Zero Carbon Act will be amended to ensure it complies with the fundamental requirement of the Paris Agreement, that climate change policies must “not threaten food production”.

When it comes to freshwater, with less than 2 percent of New Zealand’s resource captured and used, National plans to promote storage options so communities and farms do not run out of water.

And with regards to the ownership of water, National’s leader says water “belongs to everyone but is owned by no one”.

Labour on the other hand is promising to progress Maori rights and interests in water, and to ensure iwi are involved in the development of a new Resource Management Act to no doubt further enshrine Maori cultural values within the consenting process.

When it comes to the protest action over Ihumatao, while Labour wants to intervene to resolve the stand-off through a possible taxpayer funded deal with Fletchers, Judith Collins says it is private land and the Government should not be involved. She would not give in to Maori activists and says that no public money would go into a purchase of the land if she is Prime Minister.

The issue of free speech also provides a clear choice between the parties.

While the Bill of Rights Act guarantees everyone in New Zealand the “freedom to seek, receive, and impart information and opinions of any kind in any form”, the Human Rights Act prevents New Zealanders from inciting racial disharmony.

The Prime Minister has confirmed that if re-elected, Labour would beef up hate speech laws by including religion along with race as grounds for prosecution under the Human Rights Act. She also wants to add sexual orientation, age and disability to any proposed changes – and she would require all hate speech ‘incidents’ to be recorded by Police.

Neither National nor ACT support hate speech laws saying they would not commit to any change that would lead to a further loss of our freedom of expression.

While it can be tempting to think of an election in terms of a smorgasbord of policy choices, it is crucial to keep the long term interest of the country in the forefront of our minds.

Elections are not just about the here and now – they are about deciding which pathway we wish to take to protect the future for our children and grandchildren.

This week’s NZCPR Guest Commentator Sir Roger Douglas is no stranger to the long-term impact of good policy decisions having done more to improve our economic outlook than any other New Zealand politician. He was responsible for getting the country back onto a path to growth in the tumultuous 1980s, after Prime Minister Robert Muldoon just about destroyed the economy.

His policy programme was focussed on the plight of the ‘working man’ – those who work hard but struggle to make a headway because the tax and cost structure of the economy is skewed against them.

Sir Roger believes that if you can help hard working New Zealanders to get ahead, then their success not only lifts outcomes for the whole country, but inspires those on welfare to find jobs so they too can lead fuller and richer lives.

In his article, Sir Roger is critical of governments that load unaffordable debt onto future generations, because they only want to do what is popular, instead of what is right:

“Governments will need to remove the blinkers of self-interest, own up to our debt crisis, acknowledge the responsibility they have to future generations, and look to implement imaginative policies that are focused on the medium to long-term, rather than the toxic desire to hold onto power for three more years”.

The reality is that the public debt that Labour has burdened us with as a result of their hard-line lockdown and cavalier attitude to borrowing is expected to peak at over 56 percent of GDP in 2026, up from 19 percent in 2019. It will be a massive liability for future generations unless the next government can successfully get the country on track to rapid and widespread economic growth.

The polls are open. Labour and the Greens are encouraging everyone to vote early to capitalise on their favourable poll ratings. They are concerned that as voters begin thinking more about the future and less about Covid-19, they may switch allegiance to parties promoting freedom and growth. Whether enough do so to alter the outcome of this election remains to be seen.

*Which do you believe is the most effective way to grow the economy – more Government spending or tax cuts?