A Country in Lockdown 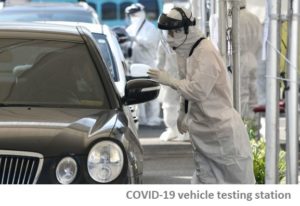 The global COVID-19 crisis is deepening. Within 12 weeks of the new coronavirus being detected in workers at a live animal market in China, 100,000 people around the world had caught the disease. Twelve days later that had risen to 200,000 and now, six days later, there are almost 380,000 cases.

New Zealand’s first case was reported on February 28. In just over three weeks, the numbers have grown to 102. Two of those cases appear to signal community transmission.

The graph is now rising so steeply that a new nation-wide alert system has been introduced. On Saturday the Prime Minister told the nation that New Zealand was at Level 2. Just two days later, she raised it to Level 3, and advised that in 48 hours it would become Level 4.

The country is being closed down. Supermarkets and other essential services will stay open, but everyone else has been ordered to stay at home.

As always, Jacinda Ardern claims her decision is world leading. While that may sound reassuring to some, the reality is less so.

In early January, the Government activated New Zealand’s Pandemic Plan. Based on the 1918 flu pandemic in which 9,000 people died, the plan provides a strategy for managing a serious health crisis. It outlines a worst cases scenario in which 40 percent of the population becomes ill over a two month period, with millions infected and tens of thousands of deaths.

It’s the sort of tragic scenario Northern Italy is facing. They are calling it “the apocalypse”.

Because a pandemic would disrupt supply chains, the Ministry of Health has stockpiled medical supplies including personal protective equipment such as gowns, gloves, and masks.

On 24 February the Prime Minister said there were 18 million face masks in stock. Ironically retailers are unable to secure supplies to meet public demand.

COVID-19 is highly contagious because as well as infecting deep lung tissue in serious cases, it infects the upper respiratory tract enabling the virus to spread through breathing, coughing and sneezing. Most of those infected are asymptomatic. That appears to be the case with most children.

While the virus infects people of all ages, those who are older or have pre-existing medical conditions are most at risk.

In older people the virus can trigger a cytokine storm syndrome, causing the body’s immune system to go into overdrive and flood the lungs. A new treatment advisory states: “Accumulating evidence suggests that a subgroup of patients with severe COVID-19 might have a cytokine storm syndrome. We recommend identification and treatment of hyperinflammation using existing, approved therapies with proven safety profiles to address the immediate need to reduce the rising mortality.”

While the spread of COVID-19 is rapid around the world, China, South Korea, Taiwan, Hong Kong and Singapore all appear to have contained the disease, without destroying their economies.

Although China ended up with over 81,000 cases and more than 3,200 deaths, the infection was largely contained within the Hubei province. While South Korea also had an early crisis with more than 2,600 cases emerging over a twelve day period from a single religious gathering of 500 people, they have managed to contain total cases to 8,961 with 111 deaths.

While Jacinda Ardern has closed down New Zealand, these countries have all shown it is possible to contain the disease without destroying the economy: they rigorously test for the infection, they isolate people with the virus, they meticulously trace contacts, and they require people to not only practice good hygiene and social distancing, but to wear face masks in public places as well.

They believe isolating people with the virus is absolutely critical to managing this disease. Patients in a serious condition are treated in special isolation hospitals, while those with mild symptoms are often housed in makeshift facilities. This strategy not only prevents family members from catching the disease, but crucially, protects regular hospitals, patients and staff from cross-infection.

This week’s NZCPR Guest Commentator, Professor Dale Fisher, Chair of Infection Control at the Singapore’s National University Hospital, explains how their approach has contained the virus, while still enabling the country to operate:

“Looking at what we do differently, I think the biggest one is Singapore didn’t let positive patients back into the community. China also didn’t do that. Wuhan created 50,000 hospital beds in two big temporary hospitals. These weren’t hospitals for sick people; these were all the mild cases that Australia, Europe and US sends home.

“In Singapore, we think it’s better to hive those people off and look after them elsewhere until the virus is clear.”

Professor Fisher explains that contact tracing teams get in touch with everyone who has come into contact with an infected person, arranging to pick up and test those with early symptoms.

“If people don’t have symptoms, they’re put in home quarantine. And home quarantine is very strict. A couple of times a day, you’ll get an SMS and you have to click on a link that will show where your phone is. In case you cheat and leave your phone at home with someone else, the government has people knocking on doors now and then. The penalties are pretty harsh.

“We have been very strong on community engagement. The messages we send are: if you are sick, stay home. If you are sick and have had contact with a COVID-19 patient, come in for a test. If you can’t stay home and you have to go out, wear a mask.”

There has not been nearly enough testing.

Microbiology Professor Andrea Crisanti of Padua University explains how testing eradicated the virus from the community where Italy’s first COVID-19 death occurred: “We tested all residents of Vò, a town of 3,000 inhabitants near Venice – including those who did not have symptoms. This allowed us to quarantine people before they showed signs of infection and stop the further spread of coronavirus. In this way, we eradicated coronavirus in under 14 days.”

Professor Crisanti says, “At the time the first symptomatic case was diagnosed, a significant proportion of the population, about 3%, had already been infected – yet most of them were completely asymptomatic… Asymptomatic subjects represent a good 70% of all virus-infected people. Our study established a valuable principle: testing of all citizens, whether or not they have symptoms, provides a way to control this pandemic.”

With most virus-infected people having no symptoms, New Zealand’s testing regime is far too limited. At the present time the only people who can get tested are those with clinical symptoms (a temperature of 38 degrees Celsius or over, or an acute respiratory infection with a shortness of breath, cough or sore throat) who have travelled overseas or had contact with someone suspected of being infected with the virus.

The World Health Organisation has repeatedly said, the only way to get on top of this pandemic is to “test, test, test”. As a result, other countries are operating drive-through testing stations to provide quick, safe and free tests to anyone who is concerned. The results are texted through the next day.

With everyone about to be confined to their homes, New Zealanders now need free access to testing so that those being infected by asymptomatic family members can be identified too.

We also know that face masks are essential in the fight against COVID-19. That’s why health professionals wear them.

In all of the countries that are beating the disease the Government has issued face masks to citizens, which they are required to wear in public. They reduce hand to face contamination, and encourage social distancing.

Now we are at the highest alert level, New Zealanders must be issued with masks.

It is also unacceptable that people cannot buy hand sanitiser. The shortage is due to overly restrictive health and safety regulations introduced in 2017 that prevent manufacturers from using 1,000 litre vats in the production process, requiring 30 litre vats instead.

If those regulations were suspended, the 600,000 bottle backlog could be cleared in a week instead of 3 months. The Prime Minister needs to sort this out.

In spite of New Zealand’s pandemic plan being launched in January, the Government has been unable to tell journalists how many ventilators are available for COVID-19 patients. Kiwi firms have offered to help manufacture them, but the leadership needed has been lacking.

When the Prime Minister announced “the widest ranging and toughest border restrictions of any country in the world”, the feedback from travellers was that the restrictions were a farce – no temperature checks, no explanation of the new requirements, and insufficient details collected to ensure people self-isolate.

The Government’s latest decision to close down the country will cripple the economy. The sharemarket has been in freefall. Wealth is being destroyed. Many Kiwi businesses will not survive.

The Government has now expanded their business support package of three-month weekly wage subsidies of $585 for each full-time worker and $350 for part-time workers to include all employers experiencing a 30 percent drop in revenue compared to the year before. A business finance guarantee scheme and help for mortgage holders is also being worked on with banks.

In a bizarre twist, the ‘business support’ package not only boosts beneficiaries and pensioners through a $25 a week increase in welfare benefits and a doubling of winter energy payments, but it also penalises landlords through the freezing of rents and the banning of no-cause terminations.

If the Government is genuine about wanting to help Kiwis get through the difficult times ahead, they should consider reducing GST to 10 percent and/or lowering petrol tax, both of which would also provide a welcome stimulus to the economy.

Furthermore, the minimum wage increase from $17.70 to $18.90 an hour, that will cost businesses an extra $50 a week per worker from 1 April, should be postponed.

While New Zealand’s health authorities are doing a sterling job trying to cope with the pandemic, the Government’s leadership has appeared piecemeal and reactive.

When looking at the 102 confirmed COVID-19 cases posted on the Ministry of Health’s website, the vast majority were infected overseas. Flight details are known and other travellers can be tracked.

While not all details of cases have been provided, it looks like only a dozen or so people have been infected from within New Zealand – mostly by those returning from overseas.

Furthermore, there appears to be only two cases to date where the source of the infection cannot be ascertained, that could signal ‘community spread’.

Unless the Prime Minister knows something that we don’t, it certainly appears that enacting the Singapore model could have prevented the country from needing to be closed down.

Under that approach, everyone infected with COVID-19 would be isolated. Seriously ill patients would be admitted to an isolation hospital – such as a private hospital facility – not a public hospital. Those with mild symptoms would be housed separately until their tests are clear. The Army will have facilities that could be used if needed.

All of the contacts of the infected people would be tracked and tested. Anyone infected would go into isolation. Those testing negative would go into home quarantine under strict monitoring.

In the two cases of suspected community transfer, the communities themselves would be quarantined and everyone tested.

The rest of the country could carry on, with everyone being careful and on heightened alert – essentially the same as in those countries that have successfully contained the virus.

With good management, a complete shut-down of the economy may not have been necessary.

*Do you have confidence in Jacinda Ardern’s leadership over COVID-19?