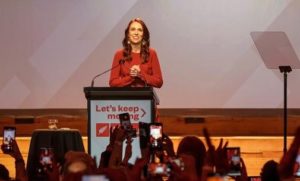 According to one election night commentator, Saturday’s landslide result was a remarkable victory for a party that “couldn’t make anything fly, not even a kite”.

Favoured by the media and seen by many voters as the leader who had literally saved them from a coronavirus death, Jacinda Ardern defied the odds to win an historic MMP majority for Labour.

What is even more remarkable is that Labour won the party vote in every electorate seat except four, turning virtually the whole country into a sea of red.

ACT gained 8 percent and 10 MPs for their best ever result, and the Greens won 7.6 percent, including the Auckland Central electorate seat, to also have 10 MPs.

In a surprise result, the Maori Party secured the Maori seat of Waiariki, returning them to Parliament after their election defeat in 2017.

With only 2.7 percent of the party vote, last election’s ‘kingmaker’ party, New Zealand First, failed to reach the 5 percent MMP party vote threshold for Parliament – along with other minor parties including the New Conservatives on 1.5 percent, TOP 1.4 percent, and Advance NZ 0.9 percent.

Provisional results for the euthanasia and cannabis referenda are expected on October 30, followed by the final results on November 6.

A number of commentators have claimed that the election victory gives Labour a strong mandate to pursue a left-wing ‘transformative’ agenda, but the results show otherwise.

Newstalk ZB’s Kate Hawkesby explains what was going on: “I can tell you that if I had a dollar for every National voter who told me they were voting Labour this time round to keep the Greens out, then I’d have made a lot of money out of this election. Nats voters disillusioned with the omnishambles that is National right now, and freaked out by talk of a wealth tax, held their breath and ticked red on the day. Covid-fearing Kiwis ticked red, and the red ticked red, and voila – a landslide.”

Labour ran a masterly campaign – by keeping the country’s focus on the virus, and constantly repeating the mantra that it was our team of 5 million that defeated it, they communicated a powerful party line: by sticking together we won the Covid battle and by staying with Labour we will win the battle to rebuild our nation.

With focus group polling underway since January, Labour strategists advised that to win the election the party needed to shift into the political centre ground and temper their socialist ambitions.

As a result, Labour based their policies on their 2017 agenda to reassure National voters, and designed their new commitments to attract them – such as their plan to pay back the debt through economic growth rather than wealth taxes: “The key to our plan is sustainable economic growth. More people in work, more businesses thriving, and more New Zealanders out shopping means more money coming into the Government.”

They used conservative slogans such as a ‘strong and stable’ government and a ‘steady pair of hands’ to win over ‘soft’ National supporters – as Newsroom reported: “Framing a party as a steady pair of hands is usually a message heard from the right, a strategy employed by the John Key-Bill English government.”

“Ardern’s favourite line over the course of the campaign has been that ‘National is no longer the party of Bill English and John Key’. This is what political strategists call a permission structure. For many voters politics isn’t about ideology or policy: it’s an expression of their identity. They vote Labour or National because it’s part of how they see themselves. When asked in focus groups they’ll say things like ‘I vote Labour because my dad was a union delegate, or ‘I vote National because everyone around here does’.

“You can’t win people like that over with a policy launch or an aspirational slogan. But when a party disintegrates the way National has, its adversaries can present a suite of arguments giving its traditional supporters permission to vote against their own identity group. Boris Johnson used this technique to great effect in the UK’s 2019 election when he told working class Labour voters that he needed to ‘borrow’ their vote to get Brexit done. ‘It’s OK to vote for me this time’ is Ardern’s message. ‘You’ll get the same government you did when Key and English ran things, but my party isn’t tearing itself to pieces in the middle of the election campaign against a background of a deadly pandemic and global economic crisis’.”

On election night, Jacinda Ardern acknowledged that her support had come from across the political spectrum, “To those amongst you who may not have supported Labour before… I say thank you. We will not take your support for granted. And I can promise you, we will be a party that governs for every New Zealander.”

She set out her priorities: “This is our opportunity to build an economy that works for everyone, to keep creating decent jobs, to up-skill and train our people, to protect our environment and address our climate challenges, to take on poverty and inequality… to invest in the infrastructure…  New state homes to house the homeless. 100% renewable electricity generation. Free trades training and interest free loans for small businesses to expand and to thrive. Our plan is already in action and already working. But after this result, we have the mandate to accelerate our response and our recovery and tomorrow we start.”

In a media conference the next day, she spoke further about her plan: “We want to make sure that we’re working on things like flexi wage, small business loan schemes, those things that really aid our economic recovery quickly. There is a list of Covid priorities that I want to make sure we fulfil before the end of the year. But there will be other areas where I do want to strongly signal the extra work that we want to continue on as a government. None of it will be new, though, because we laid the foundations for these next three years in the previous three years.”

Jacinda Ardern clearly wants to position Labour as the natural party of government for all New Zealanders, so will likely attempt to embrace every sector group of influence including the rural and small business sectors.

Managing the expectations of Labour’s left-wing supporters, who are already calling for sweeping changes to progress their socialist ideas, with be a key challenge for Jacinda Ardern.

The unions have a major influence within the Labour Party and their demands for stronger industrial relations controls will have to be balanced against the need to maintain the business confidence necessary to drive the recovery.

By moving to the centre Labour risks opening up their left flank for the Greens to build a stronger and more extremist base at Labour’s expense. The re-emergence of the Maori Party will also become a competing force as they push a radical separatist agenda that will further divide our team of 5 million.

National meanwhile, paid a heavy price for their disarray.

As Frank Newman explains, “National lost votes on all fronts. The leakage to ACT and the New Conservatives is likely to be due to failings within the party itself. The leadership flip-flops, the poor handling of the ‘errors’ in its economic plan, the lateness in delivering policies of substance, and a lacklustre campaign that seemed to be modelled on their previous campaigns.”

The party was especially out-gunned on the campaign trail, as political commentator Richard Harman outlines: “On the road with Ardern, they had a much more experienced and substantial team. They had two press secretaries with the Prime Minister; National had one. Labour had a professional video crew for social media; National had a staffer with an I-phone. Labour had its former party president and Minister, Ruth Dyson, as its advance person carefully setting up events that Ardern was going to and checking them out to avoid pitfalls. National got into trouble when its leader, Judith Collins, was sprung on a Ponsonby Road walkabout chatting with planted National Party workers pretending to be casual passers-by; there was little evidence of any advance work on that campaign stop.”

National’s leadership challenges and botch-ups reduced campaign funding and turned off voters. Judith Collins described the cost to the Party when an email criticising her announcement of a review into Auckland Council was leaked to the media: “that little leak… cost us five points”.

National’s big loss is a wake-up call – the Party knows it has to rebuild from the ground up if it is to have any hope of governing again.

Of the many forces working against National, some were self-inflicted, while others, like the pandemic were out of their control. But all the way through, serious concerns were raised about media bias against them.

Until now such concerns were largely anecdotal. But the launch of a new public good website MediaBias, which presents an analysis of the political leanings of New Zealand’s media, quantifies the problem by ranking major news outlets on articles published between Oct 1 2019 and Oct 20 2020: “Whilst the results are preliminary, as far as we are aware, it is the largest analysis of political bias in the New Zealand media to date.”

The results are fascinating – all mainstream media are found to have left-wing political leanings. The least biased was the NZ Herald, followed by Stuff, Newstalk ZB, Newsroom, Radio NZ, TVNZ, with Newshub the most left-wing. These results appear to back up the view that the media exacerbated the challenges that National faced through unfair reporting in the lead up to election day.

Jacinda Ardern has promised to govern for all New Zealanders. Whether she can do that and retain the voters that migrated from National – in the face of strident demands from her left-wing party base – will determine whether she can win the 2023 election.

Judith Collins, as Leader of ‘Her Majesty’s Loyal Opposition’, plays a crucial role in New Zealand’s Parliamentary democracy, with the prime responsibility of holding the government to account. How well Judith and National can perform that duty, and whether they can rebuild strongly enough to attract back their former voters, will determine their election chances in 2023.

Meanwhile, Labour has been given an historic mandate to govern alone for the next three years. They have committed to rebuilding the economy through economic growth. That means creating the environment in which private enterprise and wealth creation can flourish for the benefit of consumers, employees, employers, and society as a whole. How well they can achieve that goal will determine whether they deserve to govern in three years’ time.

*Looking ahead to the 2023 election, do you believe Labour will be able to retain the votes it gained from National?