“Those who fail to learn from history are condemned to repeat it” – Winston Churchill, 1948 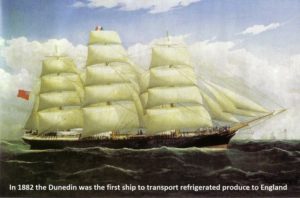 In a speech last week to state sector workers and children in Melbourne, Prime Minister Jacinda Ardern described a period of economic turmoil in New Zealand: “Starting in 1984, through to the 1990s, we removed regulations that were said to hamper business, slashed subsidies, transformed the tax system, dramatically cut public spending…”

She questioned whether the reforms were really necessary, then explained in a typically emotive fashion, “I was a child back then, but I remember clearly how society changed. I remember nothing of Rogernomics of course – I was five. But I do remember the human face.”

To explain to our Prime Minister why Labour’s reforms were so necessary, we need to revisit history.

For much of its post-colonial era New Zealand was a lucrative source of primary produce for Mother England. With prices set by inter-governmental agreement, our economy was well supported, but highly regulated. To protect the dairy industry, a doctor’s certificate was needed to buy margarine. To protect the wool industry, nylon carpets were banned. Even the railways were protected, with trucks prohibited from carrying freight for more than 30 miles.

Everything changed in 1973 when Britain joined the European Economic Community. Our economic difficulties were compounded by the 1974 oil shock. Living standards fell dramatically from 3rd in the OECD in 1953, to 22nd by 1978.

To revitalise the economy Prime Minister Robert Muldoon introduced a series of “Think Big” projects to make New Zealand self-sufficient in energy. They failed to deliver the promised rewards and their excessive costs added to the nation’s woes. By 1984 New Zealand was on the brink of economic collapse, with high debt, high inflation, and high taxes.

Jacinda Ardern indicated in her speech that she understood the human side of the upheaval created by major reform, but what she and her fellow supporters of State control conveniently ignore, are the benefits that flow to everyone when the free market is allowed to create wealth.

Regrettably, Jacinda Ardern and the Greens will be taking the country back down the same disastrous State interventionist route followed by Robert Muldoon when they impose their punitive climate change agenda.

What’s worse is that the PM is refusing to acknowledge the magnitude of the economic disruption she is about to inflict on the country. Ironically, she seems blind to the “human face” of rural families and communities.

While shrewd heads of government around the world talk the climate change talk but do nothing that will harm their economies, through their zealotry our political leaders – including the leader of the Opposition – are about to harm ours. While their changes will not make one iota of difference to the planet, they will turn New Zealand into a sacrificial lamb to climate change.

Even veteran broadcaster Peter Williams has had enough: “I’m sorry but my head hurts. I am so over the nonsense that is being propagated by politicians and policymakers about this thing that is now just referred to as ‘climate change’. Every day it is being foisted upon us. The world is in crisis. There is going to be a disaster, a catastrophe. The world is going to end. We have 12 years. We have 10 years. Prince Charles says we have 18 months left before it is irreversible and the world will end.

“Why do we allow people to get away with this? Why is there absolutely no debate that these prophets of gloom may possibly be wrong? Why is it that not just Stuff, but it seems all media in this country refuse to allow even a skerrick of evidence that CO2 may not be the cause of the earth’s warming?

“Why am I so worked up about this? I’ll tell you why. We are being fed BS by our politicians, politicians from both parties who refuse to ask questions? Politicians and policymakers who use the phrase ‘the science is settled’. Science can never be settled. How can science be settled? It’s like technology… it’s always evolving.”

Peter is correct – the climate science underpinning the Zero Carbon Act is certainly not settled. Kiwi scientists are disputing the UN’s estimates that cows and sheep are responsible for generating almost half of the country’s man-made greenhouse gas emissions. They say their methane calculations are flawed and that the warming effect is minimal.

That’s why Jacinda Ardern’s decision to go ahead and impose draconian restrictions on agricultural emissions – in spite of this uncertainty – is so disturbing. The Prime Minister is now on a crusade to reduce stock numbers, even though livestock farmers are the backbone of New Zealand’s export sector – and are crucial to the country’s economic wellbeing.

The PM’s plan is to put so much pressure on farmers that she will drive them out of business – just as occurred in the coal industry, and oil and gas.

So exactly how is she doing that? Here are five ways.

Firstly, Jacinda Ardern is requiring a dramatic cut in methane emissions of up to 49 percent – 10 percent by 2030 and the balance by 2050 – but she is prohibiting farmers from being able to plant trees to offset their livestock emissions, even though other sectors can use forestry. The only option left to farmers to reduce emissions will be to cut livestock numbers.

Secondly, because the Prime Minister wants New Zealand to be a role model for other countries, she has legislated for the harsher 1.5 degree Paris target instead of the more relaxed 2 degree target. This means Kiwi farmers – and other exporters – will face tougher restrictions and higher compliance costs than their competitors, who may face no such charges at all.

The estimated cost of compliance for sheep and beef farmers is crippling – “as high as 123 percent of net profit for an average farm” – while dairy farmers could see profits “cut by up to 60 percent”.

Thirdly, forcing farmers to meet the first of their emissions reduction targets in just 10 years’ time, while everyone else has 30 years to comply, denies them two decades of technological advancement that could help them to fulfil their requirements in a cost-neutral way.

Fourthly, the government’s proposal to subsidise imported electric and hybrid vehicles by up to $8,000 – funded through a tax of up to $3,000 on vehicles with higher greenhouse gas emissions – is yet another hit on farmers. The consultation period for this measure runs until August 20 – to send in a submission, please click HERE.

And finally, on top of all the worry over emissions reductions, more pressure is about to be put on farmers – this time over water quality. The Green Party wants the Government to set a five-year time limit to clean up the country’s waterways, and Environment Minister David Parker appears to agree. He is expected to release revised environmental standards for freshwater soon. But forcing farmers to deal with the new water quality restrictions, could well be the straw that breaks the camel’s back.

The Prime Minister’s strategy of pressurising farmers is working. A Federated Farmers’ survey reveals that only 10.8 percent of farmers feel optimistic about the future of farming under Labour.

Already there are reports of increasing numbers of farmers selling their farms for other uses, including forestry. This is leading to growing concerns about the downstream effects on rural communities as farm-service industries face closure, and schools struggle with falling rolls.

In fact, thanks to our Prime Minister we could be witnessing the beginning of the decline of this country’s crucial dairy, meat, and wool export base, that generations of Kiwi farmers struggled to build into the global leader it is today.

The impact on farmers of Jacinda Ardern’s climate change legislation – and the economic loss to the country – is so significant that it has been estimated to be the equivalent of a major outbreak of Foot and Mouth disease.

The foot and mouth comparison is particularly apt as this government’s brand of socialism is akin to a disease that kills the entrepreneurial spirit and destroys initiative and wealth.

Their malaise is not only affecting agriculture. Business confidence remains at record low levels. There is little investment and employment growth has stalled. The number of people on the Jobseeker benefit has rocketed 11.2 percent or 14,000, since June last year. Consumer confidence is now in decline, and economic growth is expected to fall as low as 1.4 percent by 2022.

Since Jacinda Ardern has said she recognises the pain of displacement suffered when people lose their jobs and industries close, we would like to know what her plans are to ensure that Kiwi living standards don’t fall when her climate change policies become law.

Other countries have, of course, successfully transformed themselves, including Ireland and Singapore.

Ireland was an agriculture-based society, but turned itself into a modern high-tech economy – a hub for software development and service out-sourcing for many world-leading companies.

The key was the government’s decision to attract investment – including by lowering the corporate tax rate to 12.5 percent, then dropping it further to 6.5 percent for business activities arising from research and development undertaken in Ireland.

Their strategy worked. Ireland has attracted global giants such as Amazon, Facebook, and Google. A thriving research, development and investment sector now exists, with strong government support for productive collaboration between industry and academia. The workforce is highly skilled, and the country has an advanced telecommunications infrastructure, with state-of-the-art optical networks and international connectivity.

Singapore’s transformation is even more dramatic, going from a third world country to a high tech trade hub that is one of the world’s leading economies. The government opened up the country to global enterprise, by building an environment that attracts business with excellent infrastructure, a well-educated workforce, open trade routes, a flexible labour market, and low taxes – the top income tax rate is 20 percent and the corporate rate is 17 percent or 8.5 percent for business income up to S$300,000.

New Zealand economist Dr Edward Hudson, this week’s NZCPR Guest Commentator, is a frequent visitor to the US’s vibrant technology hub in Silicon Valley. I asked Dr Hudson to share what he considers to be the secret of their success, and, given the disruption that will be caused by the Prime Minister’s radical climate change agenda, what he thinks could replace farming as our leading industry:

“Can the government help in the development of growth industries? The outlook here is poor-to-mixed. The government enabled the creation of Fonterra but got it wrong – as a supplier-focussed rather than market-focussed business, with monopoly power over farmers, it is unlikely ever to excel in international dairy-products markets.

“Present government policies frequently hinder the growth of innovative industries – the government at present is trying to tax tourism providers; the Resource Management Act complicates the development of facilities; the emergence of race-based provisions affecting business and development (including the Marine and Coastal Area Act) is complicating growth; while trends in labour law are raising costs, especially in the hospitality and tourism industries; and the tax treatment of business is less favourable than in many of our competitors.

“New Zealand has its own successful industries, essentially based on using our natural resources. Helpful government policy, as in Silicon Valley, would be for the government to get out of the way and let the dynamic businesses get on with their growth.”

Building economic success takes time and there are risks in developing new income streams. New Zealand’s agricultural success had its foundation back in the days when those first refrigerated ships sailed to England. Jacinda Ardern is on the brink of degrading an industry that has taken over a hundred years to build into a mainstay of our economy.

Do you feel optimistic about the future of the economy under Jacinda Ardern’s Government?