A Slippery Slide to Totalitarianism 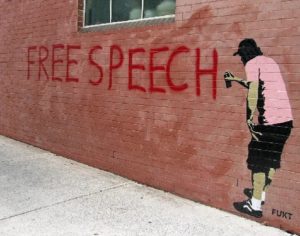 There is no right in the world not to be offended. That right simply doesn’t exist. In a free society, an open society, people have strong opinions, and these opinions very often clash. In a democracy, we have to learn to deal with this.”
– Sir Salman Rushdie, the British author, had a fatwa calling for his death issued against him by Muslim fanatics in 1989 following the publication of his book ‘The Satanic Verses’.

To mark the two-year anniversary of the dreadful assault on two Christchurch mosques by the deranged Australian extremist Brenton Tarrant, the Minister in charge of the Government’s Royal Commission response, Andrew Little, reaffirmed that all 44 recommendations have been accepted in principle: “The Government intends to ensure that its progress towards implementing the recommendations is transparent, and that it regularly communicates with communities on what is happening, and how it is listening and responding to feedback that it is receiving.”

The Minister outlined some of the suggestions received during 33 meetings held with Muslim communities in January and February. They included concerns about “the cultural competency of teachers and principals” with calls for more “training”; the incorporation of “religious and cultural education programmes into school curriculums”; “disappointment and distress in the media’s portrayal of Muslims in New Zealand” and the need for “the government to intervene”; calls for “the Government to work in partnership to effect true change… and co-design policies”.

If some of these suggestions sound familiar it is because they essentially mirror controversial policies already implemented by successive governments to appease Maori sovereignty activists.

Attendees at the meetings also called for “the reform of hate speech legislation”.

At the present time, New Zealanders’ right to free speech is enshrined in section 14 of the 1990 Bill of Rights Act: “Everyone has the right to freedom of expression, including the freedom to seek, receive, and impart information and opinions of any kind in any form.”

The Human Rights Commission has stressed that our right to make controversial or offensive remarks is not undermined by these laws – they only restrict those who are inciting serious ethnic tension or unrest: “Only where there is the potential for significant detriment to society can the right to freedom of expression be limited”.

A wide range of other remedies are also available to anyone taking offense at someone’s remarks.

If the offence relates to the workplace, concerns can be raised with employers, since most have codes of conduct that do not tolerate racially offensive comments.

While protest action remains lawful in New Zealand – since that too represents free expression – it is unlawful for protestors to threaten violence or harm. Threats made against people or property that cause “significant disruption of the activities of the civilian population” are an offence under section 307A of the Crimes Act, with a penalty of up to 7 years in prison. For on-line threats, offenders can face up to two years in prison or a fine of up to $50,000, under section 22 of the Harmful Digital Communications Act.

It is in this context that Labour’s 2020 election manifesto stated, “Labour will extend legal protections for groups that experience hate speech, including for reasons of religion, gender, disability or sexual orientation, by ensuring that we prohibit speech that is likely to incite others to feel hostility or contempt towards these groups under the Human Rights Act 1993.”

So, while Labour proposed including “religion, gender, disability and sexual orientation” as categories to be protected alongside “race” in the existing legislation, the Royal Commission is recommending the far more punitive approach of criminalising people for saying the wrong thing.

They want new categories of “hate-motivated” offences to be created in the Crimes Act and Summary Offences Act, with frontline Police trained to identify “bias indicators” so they can categorise misdemeanours as “hate-motivated”.

In addition, they want to repeal section 131 of the Human Rights Act and insert it into the Crimes Act, to include ‘religion’ as a protected characteristic, to increase the penalties from 3 months in jail to at least two years, and to broaden the scope of what constitutes ‘hate speech’ from an intent to ‘incite’ hostility to an intent to ‘stir’ it up.

If Jacinda Ardern decides to combine the Royal Commission’s draconian plan to criminalise free speech with her proposal to protect not just race and religion, but gender, disability and sexual orientation as well, New Zealanders should be very afraid.

If those speaking out against such radicalism as religious fundamentalism, feminist extremism, or Maori supremacy are muzzled for their efforts and thrown in jail, New Zealand really would be on a slippery slide to totalitarianism.

The point is that expressing opinions, no matter how undiplomatic or clumsy, is the essence of a free society and the very reason why free speech is protected in law.

The freedom of expression epitomised by Barry Crump, Bill T James and other Kiwi heroes, has always been a bedrock New Zealand value. It is the lifeblood of democracy and the cornerstone of a free and liberal society. The very last thing this country needs is the chilling effect of hate speech police monitoring our every utterance, telling us which words we can and cannot use. As George Orwell warned, ‘If you control the language you control the mind.’

With so many constraints already existing to restrict speech which is deemed to be objectionable, there is no justification for introducing more punitive law changes – unless, of course, the underlying objective is to use free speech regulations for political advantage.

In reality, the censoring of free expression in this country is already well underway without any need for new laws.

Just last month Magic Talk’s John Banks was essentially sacked because he referred to Maori as a Stone Age culture. The truth that they were a Stone Age culture before Europeans arrived with their metal tools, utensils, and weapons, did not appear to matter!

Magic Talk presenter Sean Plunket, who expressed support for John Banks’ right to free expression, also left the station – before he too was removed.

Peter Williams, the only surviving high-profile conservative host at Magic Talk, is also coming under pressure – he is being undermined by the Deputy Prime Minister Grant Robertson, who is now refusing to continue his weekly interview slot, after being asked whether the Government intended supporting the “Great Reset”.

Prime Minister Jacinda Ardern has now also joined in, cancelling her weekly interview slot with Newstalk ZB’s Mike Hosking, another conservative host, supposedly for rescheduling reasons, but more likely because she does not like tough questions.

Many newspapers have already banned commentary challenging United Nations’ climate change socialism, even though their doomsday predictions are so totally inaccurate that their only purpose must be to scare the public into compliance. Stuff, astonishingly, is now also refusing to publish anything that challenges Maori sovereignty, preferring to promote their radical agenda to control our country, instead of the truth.

Earlier this month, the Herald also caved in, cancelling historian and former Labour cabinet minister Michael Bassett, by publishing then removing a column of his from their website that outlined how a Maori cultural takeover of New Zealand is underway.

It is in this environment that the Minister for Broadcasting Kris Faafoi has announced that a further $55 million of taxpayers’ money will be given to the media – on top of the $50 million they received last year during the Covid downturn. While the Minister claims the additional money is to ensure the viability of “public interest journalism”, it would be naive to imagine it will not be used for influence.

Opinion is divided on how far Jacinda Ardern will go in criminalising free speech.

Some, like journalist Graham Adams, believe a free speech crackdown “risks igniting a firestorm that could engulf her and her government”, and he suggests Jacinda Ardern may back off to avoid controversy: “She is no stranger to backing away from promises made on the campaign trail if fulfilling them might harm her preferred prime minister ratings.”

Others, however, are of a view that the PM will use her majority to bulldoze through the changes under the pretext of preventing another Christchurch attack.

At times like this it is important to realise that other countries are working on strengthening free speech, rather than undermining it.

This week’s NZCPR Guest Commentator is from the UK – Dr Arif Ahmed, a Cambridge University philosophy scholar, led a successful campaign to reverse the free speech restrictions that were threatening academic freedom. He explains what happened:

“I found this wording completely unacceptable.

“First, its plain meaning was directly repressive. ‘Respect’ implies appreciation or admiration; it rules out giving offence. But lecturers, students etc. should not respect patently false opinions concerning e.g. vaccination or climate change. Nor should the University demand respect for all political or religious identities, from white nationalism to Islamic fundamentalism.

“I therefore proposed amendments which among other things replaced ‘respect’ with ‘tolerance’. ‘Tolerance’ is more sharp-edged. It means willingness to accept behaviour and beliefs that are different from your own even if you disagree with them. The amendments therefore placed no limits at all (beyond the law) on what staff and students could say or write, or on what beliefs they might assert, propose or question, or on the terms in which they might do these things.”

Since the University Council rejected his proposal, Dr Ahmed gathered sufficient signatures to force a ballot of all senior academic staff. His amendments – which also replaced restrictions being used to ban speakers from the University campus with a commitment to allow anyone to speak, so long as they do not break the law, libel or harass anyone – won by a landslide with 1300 votes in favour compared with 162 opposed.

What this shows is that those extremists pushing for restrictions on free speech are in a minority. But, as the Cambridge University example shows, they will succeed unless the majority are prepared to stand up and oppose them.

And this is a lesson we Kiwis need to take on board if we are to save this country. Those pushing extreme socialism, whether it is climate change or Maori sovereignty, are a vocal minority. If the public are prepared to stand together to oppose them, their dangerous ideologies, which are undermining our democracy and our way of life, will be defeated.

I will leave the last word on the crucial importance of free speech to the Rt Hon Gavin Williamson MP, the UK Secretary for Education, who is proposing new legislation to counter the disproportionate influence that a minority of students and academics are having in censoring free expression in the UK:

“Throughout history, free speech has been a constant sword against tyranny, injustice and oppression… Ideas in themselves are not worthy of respect, only tolerance – and to thrive they must prove themselves in the arena of evidence and debate. But in amongst the oddball, incorrect, challenging or downright offensive ideas will be found those that will transform our society and revolutionise our worldviews. By their very nature we cannot know which these are in advance.”

*Do you believe hate speech laws in New Zealand need to be strengthened?
Note: Please feel free to use the poll comments to share your views on any of the issues raised in this week’s newsletter.