“If the freedom of speech is taken away then dumb and silent we may be led, like sheep to the slaughter”
– President George Washington 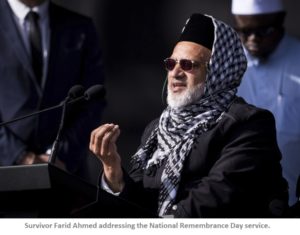 He received a standing ovation for sharing his deeply courageous response to the shocking tragedy.

Since that fateful day on March 15, when 50 people were so needlessly killed by a lone gunman, New Zealanders have rallied around the families of the victims to share their love and support. Our Prime Minister has received national and international praise for her handling of the tragedy and for reaching out to reassure the Muslim community that they are an important part of New Zealand.

But the leadership of a nation operates on many levels. While the PM has been focussed on the suffering of the victims, in her desire to reassure New Zealanders that they are safe – and to look strong and decisive on the world stage – she has unleashed measures that have the capacity to turn our wonderful country into a totalitarian state.

Her actions are in sharp contrast to the response of the Norwegian Government following the murder of 77 mainly young people by Anders Breivik in 2011. They decided they would not allow the attack to harm their democracy. They said that the proper answer to the violence was more democracy and more openness.

Firstly, under the Prime Minister’s watch, heavy-handed State censorship has banned Brenton Tarrant’s video of the shooting and his ‘manifesto’, with draconian penalties of up to 14 years in prison or a $10,000 fine.

While the censorship of the killer’s video is something that most New Zealanders can understand, the ban of the ‘manifesto’ is a different matter. It sheds light on why the atrocity occurred and could help people to better understand how something similar could be prevented from happening in the future.

The fact that the manifesto was banned almost a week after the video also raises concerns about whether there was real or implied political pressure. Perhaps the Government did not want the public to realise that their knee-jerk responses to the shooting are exactly what the killer wanted.

Secondly, in spite of knowing the Australian gunman acted alone, and that any further threat is minimal – especially since the Order in Council that was passed just days after the shooting has already outlawed the guns used in the attack – the Prime Minister is using the tragedy to rush into law extraordinarily repressive gun controls. In doing so, she is denying some 250,000 law-abiding New Zealanders their democratic right to have a say in a proper Parliamentary submission process

In attempting to beat Australia in the speed with which firearm restrictions are being introduced, the PM is using dictatorial powers to pass the Arms (Prohibited Firearms, Magazines and Parts) Amendment Bill. The Bill is now being considered by the Finance and Expenditure Select Committee through a public submission process that is a farce – two days instead of the normal four to six months.

The Bill, which is expected to come into force on April 12, bans military-style semi-automatic firearms and assault rifles, as well as shotguns with magazines that hold more than five rounds.

Many component parts will also be outlawed including magazines holding more than 5 cartridges for a shotgun, or more than 10 cartridges for other guns, along with bump stocks, pistol grips, sights, and silencers.

Ammunition to be prohibited will be defined at a later stage by the Governor General through an Order in Council and will include armour-piercing bullets.

Penalties for breaking the new law include up to 10 years in jail.

A buy-back scheme, which is estimated will cost the Government up to $200 million, is still being worked out.

An amnesty is in place until the end of September, so that people who own guns or gun parts that will be illegal can surrender them to the Police without fear of prosecution.

The way this rushed legislation has been drafted, a majority of law abiding gun owners will be criminalised through the ownership of commonly used parts, such as sights and silencers, that will be outlawed. This demonstrates only too clearly, why complex law-changes should never be rushed through Parliament – the potential for unintended consequences is just too high.

Anyone concerned about the law change, who wants to put in a submission must do so by 6pm today (Thursday) by visiting Parliament’s website HERE – the Select Committee can be contacted on fe@parliament.govt.nz.

The Government has also stated that it intends to introduce a second round of changes to gun laws later this year, which may include the registering of firearms, as well as changes to the vetting process, police inspections, and gun storage.

Meanwhile, gang leaders are saying that they will not give up their illegal weapons even if the law compels them to do so.

Even though the dreadful crimes in Christchurch were committed by an Australian visitor acting alone, it is New Zealanders who are now paying the price. Not content with restricting our freedom and democratic rights, through censorship and rushed law changes, the Prime Minister also appears intent on limiting free speech.

Under the shadow of the Christchurch tragedy, radical opportunists are calling for hate speech laws to silence anyone speaking out against their agenda. In particular, Maori sovereignty activists are now labelling those who disagree with them as not only racists, but white supremacists and purveyors of hate speech as well.

They are targeting New Zealanders of European origin, blaming them for the colonisation of the country by Britain almost 180 years ago. White New Zealanders are now being called oppressors, vilified for the fact that Maori are not the ruling class. It is all quite extraordinary.

“If you’re serious about opposing racism, I have a challenge for you. Stand with Māori against the racism they’ve endured in New Zealand for centuries.

“Since the arrival of Captain James Cook 250 years ago, Māori have struggled to gain a nationwide acceptance of their cultural values, language and spiritual beliefs. Colonisation is one of Cook’s legacies and racism against Māori is a part of it. New Zealand has inherited a British supremacy perspective and it pervades every area of our society.

“The Treaty of Waitangi was signed in 1840 to create an equal partnership with the British Crown. But equality has never been fully constituted for Māori within government and indeed, in our society. It has been left to Māori and their few, vilified non-Māori friends to rail against the system, to demand equality. But their attempts to deal with inequity is often met with public derision, they are told to get over it and move on…

“Since the Christchurch terror attack, we must all work to stamp out discrimination in its various guises. But the historical and systemic racism Māori face is one all Kiwis should no longer tolerate too.”

Their new tactic, based on the deception that the Treaty instituted a partnership between Maori and the Crown, seeks equality – not with other New Zealanders – but with the Government. They want to elevate Maori authority, customs and practices into a dominant position within society, with any disparity blamed on racism and white supremacy.

Instead of telling the truth – that the Treaty of Waitangi established the Queen as our sovereign, protected private property rights, and gave Maori the same rights and privileges of British citizenship as every other New Zealander – activists are perpetuating the partnership deception to blame this generation for events that happened in a different era with different norms, attitudes and values.

Writing in the Herald recently, Dame Anne Salmond epitomised this when she said: “White supremacy is a part of us, a dark power in the land. In its soft version, it looks bland and reasonable. In its hard version, it’s violent and hateful, spewing out curses, incarcerating young Māori in large numbers, denying them a decent education, homes and jobs, telling them they have no future, and are better off dead.”

“By this I mean people like the Green MPs Golruz Ghahraman and Marama Davidson. In Parliament, Ghahraman blamed unnamed fellow MPs and breakfast radio ‘shock jocks’ for the ‘hate speech’ that she claims led to the killings.

“Ghahraman was in such a rush to apportion blame that she wasn’t prepared to wait before making a considered response based on facts and evidence rather than supposition, assumption and prejudice. And why should she, when it was so much easier to make sweeping, unsubstantiated and emotive assertions about the killings being caused by ‘hate speech’, ‘white supremacy’ and ‘gratuitous racism’?

“Davidson, meanwhile, took advantage of a vigil in honour of the shooting victims to unleash a barrage of denunciation. ‘…This land we are standing on is land we were violently removed from to uphold the same agenda that killed the people in the mosques yesterday.’

“This was not about honouring or mourning the dead. It was about finding someone to blame and settling old ideological scores.

“I find people like Ghahraman and Davidson almost as frightening as terrorists. They don’t kill anyone, but their power to change society is greater. They use the institutions of a liberal democracy to whittle away at the open society. They are, in their way, as totalitarian and intolerant of difference as any gun-toting fascist or jihadist. They virtuously embrace ethnic and religious difference (except when it comes to Christianity, which is seen as part of the white power structure) but are aggressively intolerant of political difference and free speech.”

Calls for restrictions on free speech by radical Government MPs should raise the alarm about our future. While the Bill of Rights protects our freedom of thought, expression, and association, as we have already seen through the Censor’s bans, these rights are fragile and can easily be taken away.

Laws to protect New Zealanders from ‘hate’ can already be found in the Crimes Act, Harmful Digital Communications Act, Human Rights Act, and the Sentencing Act. If the Government is committed to stronger deterrents, they simply need to enforce the existing laws.

Already the call for action against ‘hate’ since the Christchurch attack has resulted in people losing their jobs for making thoughtless remarks, websites being blocked, and a social media crackdown being implemented. It may also have been responsible for a man losing his life.

New Zealanders who value the freedom and liberty that underpins our society should strongly oppose new laws to ban ‘hate’. Such laws, that would enable the Police to act against anyone expressing ideas contrary to those deemed acceptable by the Government, have proven to be a disaster in countries where they have been introduced, over-criminalising the population and allowing vexatious complainants to destroy lives. Furthermore, there are major concerns that preventing those with unacceptable views from airing them openly, drives them ‘underground’, where they are likely to become even more extreme.

For the sake of our future, we must not let the radicals succeed in forcing through law changes to criminalise opposing voices, otherwise under Jacinda Ardern, New Zealand really will become a totalitarian State.