A Violation of the Marine and Coastal Area Act 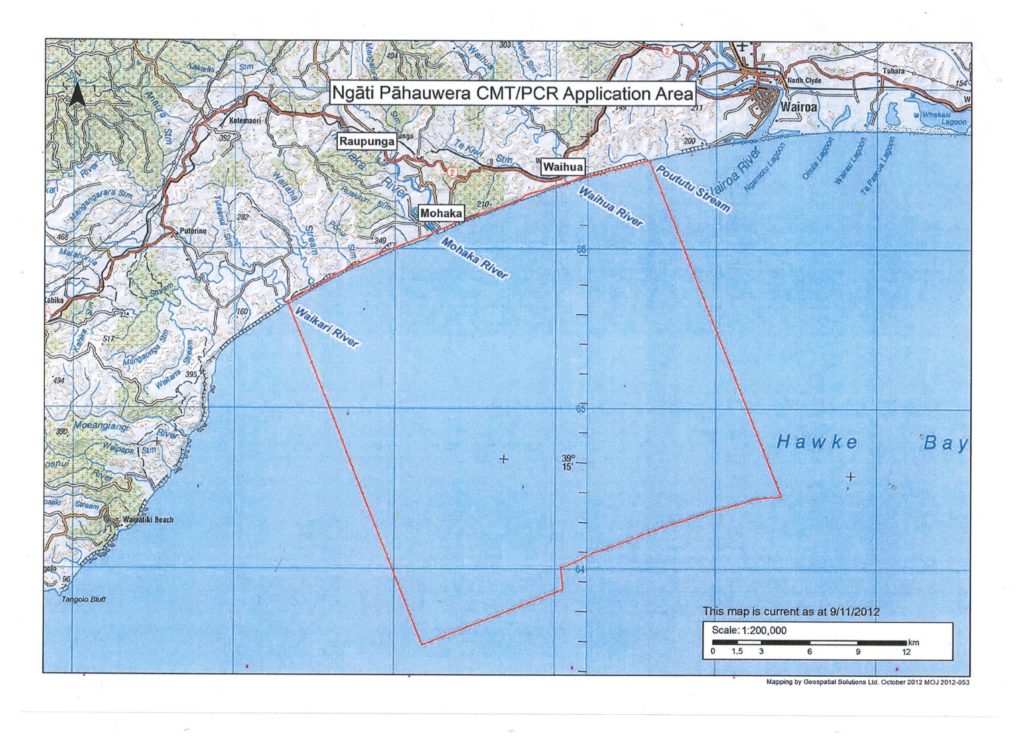 The Council of Outdoor Recreation Associations of New Zealand (CORANZ) which represents tens of thousands of people involved in outdoor recreation is opposed to the privatisation of New Zealand’s coastline through the awarding of Customary Marine Titles (CMT).

We objected to the claim by Ngati Pahauwera, for a CMT over the coast between the Waikare (Waikari) River mouth and the Waihua River mouth, in northern Hawke’s Bay and including the Mohaka River mouth, which is in the middle of the claim.

In July, 2013, CORANZ made a submission on this claim, pointing out that on the facts this claim could not succeed since the claimant tribe has not had exclusive and continuing use and occupation of this section of the coast without substantial interruption since 1840 as required by Section 58 of the Marine and Coastal Area Act.

The CORANZ submission quoted the book, The Long Pathway, by Denis McLean, describing his walk along this part of the coast with his family in the early 1980s. Because of the steep papa cliffs the only way by land for drovers and travellers to get from Napier to Wairoa and beyond was along the coast of the area that is now being claimed by Ngati Pahauwera. That is exactly what all people did – from the early days of settlement from 1840 and before, until the inland road was built between Napier and Gisborne via Wairoa in the 1930s.

As early as 1864 accounts for the Province of Hawke’s Bay showed that a bonus of five pounds each was paid to the operators of the Waikare ferry and the Waihua ferry (Hawke’s Bay Herald, 24 May, 1864) while the Province Estimates for 1st July, 1865, to 30 June, 1866, allocated 10 pounds for a boat for the Waikare ferry (Hawke’s Bay Herald, 30 September, 1865). Both these ferries crossed at the mouths of these rivers, not upstream.

In the 1860s and 1870s coastal vessels would call at Mohaka from Napier to deliver supplies and take on wool. The farmers would roll the bales down the cliffs where they were caught by wires at the bottom and from there they would be taken out by longboat to coastal sailing vessels or steamers.

At the time the telegraph wire running north from Napier stretched across the 70 yards of the Mohaka River mouth – further evidence of the public use of this part of the coast, which was owned by the Crown for the people of New Zealand.

In the 1860s John Sims established a hotel and ferry at the mouth of the Mohaka River to accommodate the growing number of travellers and drovers using the coastal route to get from Napier to Wairoa, Mahia and Gisborne. This route along the beach was used, since the only alternative would have been to battle one’s way through the hills and thick bush of the interior.

The hotel had stalls where the horses could rest while the travellers and drovers refreshed themselves inside (Hawke’s Bay Herald, 18 April, 1882).

The biggest customers for the Mohaka ferry were drovers with their stock – initially going north to farm the newly opened lands and later stock returning south to go to the freezing works at Napier. For the reason aforementioned, they used the coastal route.

In one week of 1890 two large mobs of sheep passed along the coastal route, one going north and the other south. One was 1,500 hoggets from Messrs. Dolbel Brothers’ station, Kaiwaka, en route to John Couper’s station, Springhill. The other was a mob of 2,500 fat sheep under the charge of William McCulloch from the Mahia district en route to the Napier freezing works (Daily Telegraph, Napier, 25 November, 1890). And cattle too. “A fine looking mob of dairy cattle, numbering 70 head, in charge of Mr. Roper” passed this way in 1884 en route to Messrs. Campbell and McLean’s property, Waikohu, in Poverty Bay (Poverty Bay Herald, 12 May, 1884).

In the words of the Hawke’s Bay Herald of 1st March, 1878, “It has hitherto been the custom of some drovers on arriving at Mohaka ferry to swim their stock over the river free, instead of putting them on the punt and paying as per schedule on the ferry boat. Other drovers again have made a bargain with the ferrymen to cross the lot for a lump sum, generally about half the amount that could legally have been demanded… There came along a drover called Charles McPherson, who refused to make any terms whatever, and swam his mob of 1,800 sheep over the river using, however, the punt for himself and his [5] men to cross in. The punt at Mohaka is quite a curiosity. It is of a mixed style of naval architecture, a sort of cross between a Chinese junk and a Yarmouth bloater boat. It is worked by means of a long pole and a lot of blocks and guys, dragging on a suspended wire rope. A more extraordinary, awkward punt does not exist.”

Rates for the Mohaka ferry in 1882 were a halfpenny a head for the first 500 of stock and a farthing a head thereafter (Daily Telegraph, Napier, 11 December, 1882).

John Sims could be temperamental and there was sometimes trouble – as when he cut the ferry punt adrift to prevent it being operated by another. “Since the punt was sent adrift a sandbank has formed right across the river and travellers ford their horses free”, wrote the Hawke’s Bay Herald on 14 February, 1880.

In 1878 a Crown grant for the Mohaka ferry reserve (the land at the river mouth which included the landing stage for the ferry) was vested in the Wairoa County Council (Hawke’s Bay Herald, 26 April, 1878). A seven year lease of this reserve was granted by the Council to P. Dooney from 1st September, 1881 at 5 pounds per annum (Napier Daily Telegraph, 28 October, 1881). At the expiration of the seven years Dooney transferred his interest to Mr. H. Badley (Hawke’s Bay Herald, 312 January, 1888).

John Sims owned a large block of land which fronted both the Mohaka River and the coast. On 5 January, 1881 it was reported in the Hawke’s Bay Herald that he “will give up to the public a right of road to the Mohaka ferry”. The following year it was decided by the Wairoa County Council to take what was now a formed track to the Mohaka ferry under the Public Works Act.

Even the postman used the route. “The mailman frequently travels by the beach from Mohaka to Waikare”, wrote the Hawke’s Bay Herald on 11 June, 1890.

In the early 1890s the ferry came to an end with the building of the bridge over the Mohaka River by Messrs. Glendenning and Sons and Griffin for a price of 3,769 pounds (Hawke’s Bay Herald, 9 June, 1894). The bridge was part of an upgraded coastal route that had been surveyed by Captain Turner, who turned a single bridle track into a formed road. “From Waikare ferry to Mohaka the new line holds to the left of the present track”, wrote the Hawke’s Bay Herald on 6th April, 1894.

Wheeled traffic and drovers continued to travel over this coastal route until the 1930s when the inland road, that is still used today, was built. And, as Denis McLean and other trampers along the coast have shown, the public continue to walk along the coast as of right and unhindered by Ngati Pahauwera, thus showing the futility of any claim to “exclusive and continuing use and occupation since 1840 without substantial interruption”.

The facts clearly deny that Ngati Pahauwera have had the required exclusive and continuing use and occupation of this part of the coast as required by Section 58 of the Act – the Mohaka River mouth being in the middle of their claim.

There is no reason to believe that they have had “exclusive occupation and use” since then, as by law, the coast has been publicly owned since 1840,

In view of these undeniable historical facts it is both surprising and disturbing that the former National Party minister of Treaty Settlements, instead of throwing out the claim on the grounds that it clearly does not qualify for Customary Marine Title (as he did for numerous other claims), offered this tribe a Customary Marine Title.

This recommendation for a Customary Marine Title over the coast from the Waikare River mouth to the Waihua River mouth to Ngati Pahauwera is, in the light of the facts mentioned above, a violation of the Act as they cannot show continued and exclusive use and occupation without substantial interruption of any part of this coast from 1840 as required by the Act. It will now be over to the new Minister of Treaty Settlements, Labour’s Andrew Little, to deal with this shambles, and turn it down, as it clearly does not qualify.