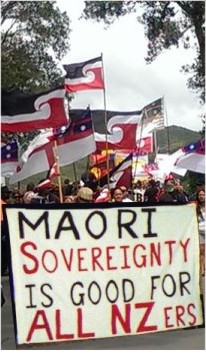 Over the years Waitangi Day has changed from being a celebration of the birth of our nation, when two peoples were united as one, to becoming a grievance day for tribal activists pursuing their Maori sovereignty agenda.

Their demands include everything from the ownership of fresh water, to a new Treaty-based constitution. They want the Maori seats in Parliament to be entrenched, and Maori seats in local government to be guaranteed. They are calling for co-governance rights across all Government agencies – including reserved Maori seats on the new Teaching Council. And they want more taxpayers’ funding for programmes leading to self determination.

For some, their ultimate goal is Maori ownership of New Zealand – as expressed by Tuhoe leader Tamati Krugar in a speech just before Christmas, when he said, “In the distant future there may no longer be Europeans living in Aotearoa, because Europeans live in Europe. That, maybe, in a long distance, the only people you find in Aotearoa are tangata whenua…”

While such talk is fanciful, we shouldn’t forget that thanks to the actions of naive and spineless politicians, who have appeased discontent instead of challenging it, many of the extremist ambitions of iwi leaders are now coming to fruition. Not so long ago goals like the ownership and control of New Zealand’s coastline would have regarded as being so far-fetched as to be laughable – as laughable as the comments above by Mr Krugar. But with our coastline standing on the verge of falling into tribal hands, it is certainly no laughing matter now.

The reality is that the pathway to iwi goals is travelled in small incremental steps rather than giant strides. One such step is the call for more to be done to keep the Maori language alive.

The death cry of te reo is in response to a decline in the proportion of Maori able to hold an everyday conversation in the Maori language. According to the Census, the numbers have fallen from 25 percent in 1996 to 21.3 percent in 2013. The number of fluent speakers of te reo is estimated at 125,000.

This decline has taken on the status of a national crisis with successive Governments committing hundreds of millions of taxpayers’ dollars to the preservation of the language.

Historian Professor Paul Moon, from Auckland University of Technology, who is this week’s NZCPR Guest Commentator with extracts from his new book, Killing Te Reo Maori, has researched attempts around the world to keep languages alive, concluding that if the Maori language was a person, it would be on life-support:

“Decades of pronouncements, proposals, plans, policies, and programmes aimed at reviving Te Reo Māori, have acted like an accumulation of grime on the edifice of the language. These accretions need to be cleared away, layer by layer, to get a more detailed impression of the state of the language and thereafter, understand its prospects for survival – if indeed there are any. And ‘survival’ is an apt term. If Te Reo Māori was a person, its condition would be one of a patient on life-support. Its pulse beats weakly, its other vital signs still appear to indicate that there is (faint) cause for hope, but linguistic atrophy is spreading from the extremities to the core, and the entire body is only being given the semblance of life by a large and cumbersome academic and bureaucratic apparatus, which keeps the essential functions working, but little more.”

Professor Moon is scathing about the calls for the language to be made compulsory.

“Of all the techniques that have been experimented with or proposed in the increasingly desperate struggle to revive Te Reo Māori, none is more ineffective than the call for the language to be made compulsory in schools. Compulsion has failed to revive indigenous languages in every territory where it has been implemented, including places where the indigenous language belongs to the majority culture of the area. What is surprising about this repeatedly-advocated ‘solution’ to the slow collapse of Te Reo Māori is that it is finding increasing popular favour in spite of the overwhelming evidence of its complete failure to achieve its desired objective. This speaks of an environment of language revitalisation where desperation and ignorance have become close bedfellows in discussions about saving Te Reo Māori.”

But is it desperation and ignorance, or clever politics?

It appears the movement to revitalise te reo is largely driven by Maori sovereignty activists.

The former co-leader of the Maori Party Marama Fox revealed as much in an interview in the Listener just before the election.  She described how the path to Maori control of New Zealand would take 12 election cycles to achieve and hinged on te reo becoming compulsory in schools.

She said it was all ‘plotted out’: “It would take 36 years – 12 election cycles – for a Maori sovereignty party to share government… it’s a radical vision… but if we believe in it, then we need to march towards it.”

According to Marama Fox, their vision of shared Government involves replacing our Westminster model of Parliamentary democracy with a “unique form of governance that would favour Maori customs, principles and values.”

She explained that the thinking of New Zealanders needs to be shifted to achieve this goal, and a “critical step” is to make “the Maori language a core subject in the country’s schools… People look at things differently once they’ve acquired te reo. It’s a world view. The Maori world view is different and that’s expressed in the language. The language unlocks our history and our thinking.”

In other words, the compulsory teaching of the Maori language is a critical step in the Maori sovereignty movement achieving its ultimate objective – control of the country.

Political support is coming from the Green Party – it believes that te reo should be a “universal core subject alongside English and Maths” in all State schools from years 1 to 10.

The crucial importance to the Maori sovereignty movement, of embedding te reo in the next generation, also explains why those who speak out against the compulsory teaching of the Maori language in schools are subjected to such vicious attacks.

In general, when questions are asked about the substantial public resources being used to prop up the Maori language, the most common response is that because it’s our ‘official’ language it cannot be allowed to die. The ‘official’ language argument is also used by advocates to justify their call for compulsion.

But their arguments don’t stack up. Governments give languages ‘official’ status as a symbol of their importance to segments of the population – and as a gesture of respect. This then allows the language to be used in a variety of ‘official’ situations, such as legal proceedings in Courts and Tribunals, so that those who rely on the language are not disadvantaged.

The fact that a language has official status does not mean it has to be learnt and used by everyone – far from it. That’s evident from a cursory examination of New Zealand’s second official language – sign language. While information about sign language is available in most schools, there are no plans for it to be made compulsory.

Ironically the English language is a compulsory subject in schools, but it’s not an ‘official’ language. English has never needed ‘official’ status, because it’s the universal language of commerce and literature and everyday living – a language that’s embraced all around the world.

Not only is the Maori language being forced onto our kids, but it’s also being used by the New Zealand Geographic Board to erase our European history from place names.

In fairness, the responsibility for using Maori names is written into their Act, with Section 6 stating that In order to recognise the Crown’s commitment to the Treaty of Waitangi, the Geographic Board must collect the original Maori names of geographic features for recording on official maps, and encourage their use.

With the law allowing anyone to call for a place-name change, many iwi are now doing so and their requests are largely being rubber stamped by the ‘independent’ Board that consists of the Surveyor-General as Chairman, a hydrographic specialist, and eight other members – two appointed by the Minister for Land information, two by the Minister of Maori Development, one from Ngai Tahu (which was negotiated as part of their Treaty Settlement), and one each from the New Zealand Geographical Society, the Federated Mountain Clubs, and Local Government New Zealand.

Radio New Zealand is another Government agency with a responsibility for promoting the Maori language that appears to have ramped up its efforts in recent times.

According to its charter Radio NZ is required to remain politically neutral as “an independent broadcaster to serve the public interest”. But it also has a statutory duty to “reflect New Zealand’s cultural identity, including Maori language and culture”.

This has led to the adoption of a Maori strategy, which states, “RNZ has implemented a new, long-term strategy that represents a commitment to creating high-quality Maori content, supporting Te Reo Maori and fostering Maori journalism. While there will still always be Maori-specific broadcast and online content, RNZ’s strategy puts its emphasis on the integration and normalising of te reo across all its platforms.”

Some of their initiatives include ensuring te reo is heard in almost every RNZ news bulletin, training all employees in the Maori language, and enabling Maori staff to take the lead in live programming on national days such as Waitangi Day.

Their goals for the promotion of Maori language and culture this year include 80 hours of broadcast programming, 1,000 items uploaded to their RNZ website, and 1.1 million views.

As a result of their strategy, many Radio NZ listeners feel that the Maori language is now being used excessively – as Dave Witherow and others recently pointed out. But the vitriolic response from the PC brigade shows just how desperate they are to ensure that no-one disrupts their agenda.

In fact, it seems that political correctness now dictates that the Maori language is featured at almost every public event. From the opening of conferences to sporting prize-givings – even Parliament’s Speaker jumped on the bandwagon by reciting Parliament’s prayer in Maori instead of English, without a translation.

Coming back to schools: if parents would like their children to learn te reo then it would be great if schools could offer it – just as many now offer Mandarin, French, Spanish, or a selection of other languages spoken around the world.

But they must be realistic. The former Prime Minister Bill English hit the nail on the head when he called te reo “someone else’s language”. He knows that the only way to keep a language alive is through the voluntary commitment of native-speakers in their households, not through compulsory government-enforced classes.

In fact, the experience of the Irish in trying to save the Gaelic language should serve as a warning. In spite of massive government support – in the form of grants, television and radio stations – and the language being made compulsory in schools, it remains in terminal decline. It seems that after 14 years of having it hammered into them at school, students who leave are not only unable to speak it, but they have no desire to use it.

So while the Maori language is an important part of New Zealand, it should not be forced onto anyone – and certainly not impressionable children. It’s time Kiwi’s woke up to the agenda behind the calls for compulsion and said #nomore to Maori radicalism!