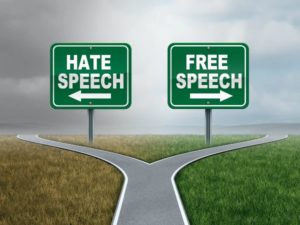 For the first time since MMP was introduced in 1996, New Zealand voters have given a single political party the absolute power to govern alone. Whether Labour decides to exercise that authority or share their mandate with the Greens, remains to be seen.

Whatever arrangement Labour and the Greens enter into it appears likely that our democratic right to free speech will be restricted given that both parties campaigned on strengthening hate speech laws.

The catalyst for changing the law was last year’s Christchurch mosque tragedy when a deranged Australian gunman killed 51 people as they prayed.

The Minister of Justice Andrew Little announced the hate speech review without fanfare a month after the tragedy. Using a newspaper opinion piece, he explained that following the mosque attacks many citizens from ‘minority ethnic and religious communities’ claimed that comments on social media and other public platforms made them feel “threatened, unwelcome and alienated”.

The Minister wrote, to “consider these claims on a principled basis” he had “asked the Ministry of Justice to work with the Human Rights Commission to examine whether our laws properly balance the issues of freedom of speech and hate speech.”

He indicated the review would not be fast-tracked and would involve an opportunity for all New Zealanders to have a say on this crucially important matter: “The process should not be rushed, and I expect a report for public comment towards the end of the year.”

But no such public discussion document was produced last year.

Instead, it turns out that rather than initiating the open and transparent process for discussing the censoring of free speech indicated by the Minister, the Government opted for secret discussions, to avoid New Zealanders turning against them.

According to a Stuff report in March, “The Justice Ministry has looked at relevant aspects of the Human Rights Act, the Harmful Digital Communications Act, and sections of the Crimes Act to see what laws need to be changed. It also consulted with affected communities and reported back to Little before Christmas, with the expectation an announcement would be made shortly after.”

In other words, consultation did take place – but only with groups wanting harsher laws, not with the wider public.

In the news story, the Ministry of Justice chief executive Andrew Kibblewhite was reported as saying that hate speech was a “tricky thing” to navigate. He said they had wanted discussions to happen “away from the political fray”, given they could “easily be derailed with so many strongly held views”. He also said they wanted to “avoid protests”.

Stuff then asked the Justice Minister for an update on progress: “The review of our hate speech laws are in the final stages. I expect there will be an announcement in a matter of weeks.”

But in the end, Andrew Little was not able to make his announcement because New Zealand First refused to support a law change that restricted New Zealanders’ right to free speech.

While Labour will have the power to push through any law change they want in the new Parliament, it is hoped that if they go ahead with their plans to strengthen hate speech laws, they will honour the commitment they made to New Zealanders, that before any changes to our free speech laws are undertaken, a full public consultation process will be held.

This is especially important since it now appears that Labour is considering establishing ‘hate crime’ as its own separate offence – similar to the situation in the UK.

According to a report on Hate Speech laws both in New Zealand and overseas that was prepared by our Human Rights Commission last year, the UK Law Commission is leading a review into their hate crime laws. A full public consultation process is now underway – details can be seen HERE.

New Zealanders’ right to free speech is enshrined in section 14 of the 1990 Bill of Rights Act: “everyone has the right to freedom of expression, including the freedom to seek, receive, and impart information and opinions of any kind in any form.”

In 1993, those rights were tempered by the introduction of the Human Rights Act – section 61 restricts free speech by making it an offence to express ‘threatening, abusive, or insulting’ opinions likely to ‘excite hostility’ or ‘bring into contempt’ any group of persons on the grounds of ‘colour, race, or ethnic or national origins’.

Under Section 131, anyone breaching the law by inciting hostility, ill-will, contempt, or ridicule, on the grounds of ‘colour, race, or ethnic or national origins’, could face a criminal conviction: “Every person commits an offence and is liable on conviction to imprisonment for a term not exceeding 3 months or to a fine not exceeding $7,000”.

But section 132 of the Act provides a safeguard – before proceeding to a prosecution, the express approval of the Attorney-General must be obtained.

The Human Rights Commission makes it clear that our right to free speech protects anyone making controversial or offensive remarks, only restricting those who are inciting serious ethnic tension or unrest: “Only where there is the potential for significant detriment to society can the right to freedom of expression be limited”. As a result, there has only been only one prosecution – back in 1979.

The Commission advises that a wide range of remedies are available for anyone taking offense at someone’s remarks.

Social media platforms have now introduced a myriad of channels for lodging complaints about content.

If the offence relates to the workplace, the Commission advises, “the best action is for people to take their concern to the person’s employer… Most have codes of conduct that do not tolerate racially offensive comments.”

While protest action is lawful in New Zealand, since that too represents free expression, it is not lawful if protestors threaten violence or harm.

Threats made against people or property that cause “significant disruption of the activities of the civilian population” are an offence under section 307A of the Crimes Act, with a penalty of up to 7 years in prison.

On-line threats are also against the law, with perpetrators facing up to two years in prison or a fine of up to $50,000, under section 22 of the Harmful Digital Communications Act.

So, despite the extensive constraints on our right to free expression that already exist, Labour appears intent on introducing more.

Labour’s election manifesto states: “Labour will extend legal protections for groups that experience hate speech, including for reasons of religion, gender, disability or sexual orientation, by ensuring that we prohibit speech that is likely to incite others to feel hostility or contempt towards these groups under the Human Rights Act 1993.”

So while the restrictions on free speech that Labour proposed last year were ostensibly to protect those ‘minority ethnic and religious communities’ who felt vulnerable in the aftermath of the Christchurch tragedy, what is now being planned is a significant expansion of hate speech protection to a number of other groups in society.

In effect, what Labour is now proposing, will enshrine identity politics into law.

With its focus on gaining special rights for so-called oppressed groups – in this case based on their religion, gender, disability, and sexual orientation – identity politics endlessly divides society, by undermining equality before the law.

Introducing identity politics into hate speech laws will lead to a stronger and more powerful government, as the state endlessly invades our liberty, granting special privileges to some groups while denying the rights of others.

The reality is that the only way to maintain a free and cohesive society is to embrace our value as individuals and protect the institutions that empower us. That means the opposite of what Labour is planning – we need to defend equality and ensure that we are all treated the same regardless of our different characteristics and identities.

This week’s NZCPR Guest Commentator, freelance journalist Karl du Fresne warns that the attack on free speech and the embracing of identity politics is part of a wider and more sinister agenda:

“It’s no exaggeration to say that Western civilisation and Western democratic values are under attack as never before in modern history. The breadth, intensity and viciousness of this attack is breathtaking. Where it will lead is impossible to say. That will largely depend on whether society recognises what’s at stake and has the will to dig in and resist it…

“Having realised decades ago that that the fight between capitalism and classical Marxist economics was lost, the extreme left opened a new front. They attacked liberal democracy’s soft underbelly: its values, conventions, institutions and philosophical foundations. Suddenly a whole range of bedrock values, from the right to free speech… was under savage attack. The underlying purpose is to destabilise society and therefore render it amenable to radical change.”

Karl explains how the core values of our society are being undermined through a myriad of ridiculous claims, such as that Western civilisation is racist, that capitalism is evil, and that the traditional nuclear family represents oppression on a grand scale.

“Neo-Marxism takes classical Marxist analysis a whole lot further, examining every issue through the lenses not only of class but also of race, gender, sexual identity and any other potential point of difference that can be leveraged into a grievance. It marches arm-in-arm with identity politics, seeing society not as a cohesive whole, sharing common interests and aspirations, but as a seething mass of oppressed minorities struggling for liberation – hence the ever-increasing number of aggrieved groups clamouring for special recognition. The result is polarisation and fragmentation.”

Given the increasingly strident and divisive demands being made by radical activist groups as they try to impose their values onto society, protecting our right to speak freely has never been more important than it is right now.

Expressing our views, no matter how undiplomatic or clumsy, is the essence of a free society and the very reason why free speech is protected in law.

The freedom of expression is a bedrock New Zealand value. While that leads to a diversity of opinions, with people disagreeing and sometimes being offensive, that does not necessarily make it harmful. The last thing we need in New Zealand is the chilling effect of Big Brother watching – policing our speech and monitoring our every utterance, telling us which words we can and cannot use.

Hate speech laws that use the power of the state to silence unpopular views are not only dangerous and divisive, but how can anyone have confidence that they will not be designed to suppress ideas the government and their activist allies do not like?

Who will be the arbiter, deciding what is and what is not hate speech?

On matters of race, will it be our radicalised Race Relations Commissioners – Meng Foon or perhaps his predecessor Dame Susan Devoy?

On election night Jacinda Ardern promised she would govern for all New Zealanders, not just for Labour activists who are seeking to cement their special group privileges into law – at the expense of everyone else.

In fact, if Jacinda Ardern is really genuine about governing for all Kiwis, she will not strengthen our hate speech laws, but get rid of them entirely.

I will leave the last word to Salman Rushdie, the British author of The Satanic Verses, who lives under a fatwa calling for his death that was issued by Muslim fanatics in 1989: “There is no right in the world not to be offended. That right simply doesn’t exist. In a free society, an open society, people have strong opinions, and these opinions very often clash. In a democracy, we have to learn to deal with this.”

*Should Labour strengthen hate speech laws or remove them entirely?