Graham Adams is a journalist, columnist and reviewer who has written for many of the country’s media outlets including Metro, North & South, Noted, The Spinoff, Newsroom and the Democracy Project. 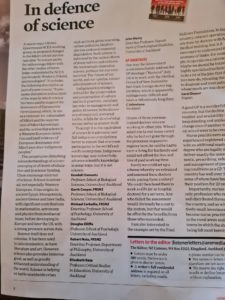 Despite their outrage, opponents have avoided stating mātauranga Māori is scientific. Graham Adams asks why they are skirting the main issue.

A distinctly curious feature of the backlash against the letter published in the Listener titled “In Defence of Science” is that none of its most prominent critics have actually defended mātauranga Māori (traditional Māori knowledge) as being scientific.

Yet the main point of the letter by the Auckland University professors — and the main point of contention for its critics — was summed up in its inflammatory conclusion: “Indigenous knowledge may indeed help advance scientific knowledge in some ways, but it is not science.”

The seven professors who signed the letter were responding to a proposal by a government NCEA working group that mātauranga Māori should have “parity” with “the other bodies of knowledge credentialed by NCEA (particularly Western / Pākeha epistemologies)” in the school science curriculum.

The “epistemologies” — that is, science — were also referred to as a “Western European invention”.

The professors objected to science being characterised in this way, on the grounds that “Science is universal, not especially Western European.”

They pointed out that the origins of science can be traced to many non-Western sources including ancient Egypt, Mesopotamia, and India — “with significant contributions in mathematics, astronomy and physics from mediaeval Islam before developing in Europe and later the US, with a strong presence across Asia”.

They also stated: “In the discovery of empirical, universal truths, [mātauranga] falls far short of what we can define as science itself.”

In response to what she seems to see as heresy, the Vice-Chancellor of Auckland University, Dawn Freshwater, announced that the letter’s question of “whether mātauranga Māori can be called science has caused considerable hurt and dismay among our staff, students and alumni”.

Proclaiming feelings of dismay and hurt does not, of course, constitute a rebuttal of the professors’ assertion that mātauranga Māori is not scientific — and nor does describing it as a “distinctive and valuable knowledge system”, as Freshwater went on to do.

Whether she was aware of it or not, the VC was offering very faint praise, indeed. A “distinctive and valuable knowledge system” could equally describe Christian knowledge such as Creationism — which is part of Pakeha New Zealanders’ cultural heritage. Yet very few would want to see it given equal weight with science in a school curriculum.

In fact, the professors’ letter didn’t say anything that could be construed as hostile to a description of mātauranga Māori as a “distinctive and valuable knowledge system”. Indeed, they stated: “Indigenous knowledge is critical for the preservation and perpetuation of culture and local practices, and plays key roles in management and policy.”

Freshwater added a further faint endorsement: “We believe that mātauranga Māori and Western empirical science are not at odds and do not need to compete. They are complementary and have much to learn from each other.”

Again, this says nothing about whether mātauranga Māori is scientific. And the question that remains to be answered by Professor Freshwater and others is — if it can’t be defended as scientific, what is it doing in the science curriculum?

A similar reluctance to respond directly to the professors’ contentious assertion about mātauranga Māori was evident in the statement by the Royal Society Te Apārangi, the nation’s premier body representing science and the humanities.

It vehemently opposed the professors’ stance, writing: “The recent suggestion by a group of University of Auckland academics that mātauranga Māori is not a valid truth is utterly rejected by Royal Society Te Apārangi. The society strongly upholds the value of mātauranga Māori and rejects the narrow and outmoded definition of science outlined in the Listener.”

The professors, of course, never said anything that implied mātauranga Māori isn’t a “valid truth” — whatever that means — but simply stated that, in their opinion, it isn’t science.

The society’s statement that the professors are using a “narrow and outmoded definition of science” also doesn’t directly claim that mātauranga Māori is scientific, although it implies it might be able to be corralled into a wider and more modish view of science than the one the professors hold.

Perhaps the most extraordinary public denunciation, however, came in the form of an open letter thundering against the professors that quickly gained more than 2000 signatures, the vast majority from academics and researchers.

It was the brainchild of Auckland University’s Professor Shaun Hendy and Associate Professor Siouxsie Wiles. As authors of the open letter, they could not bring themselves to say that mātauranga Māori represents a scientific view of the world either. They were keen, however, to insist that: “Indigenous knowledges — in this case, mātauranga — are not lesser to other knowledge systems. Indeed, indigenous ways of knowing, including mātauranga, have always included methodologies that overlap with ‘Western’ understandings of the scientific method.”

Presumably the overlap includes those parts of mātauranga Māori that are not mystical or animistic (ie that do not include taniwha, or anthropomorphise mountains or other natural features). Notably, the authors didn’t give any real clue as to what these “overlaps” are or how substantial they might be.

They described mātauranga as offering “ways of viewing the world that are unique and complementary to other knowledge systems”. This description, once again, could be applied to any distinct belief system, including the three Abrahamic faiths — Judaism, Christianity and Islam — and wasn’t denied by the professors.

The open letter is particularly remarkable for the fact that Dr Shaun Hendy and Dr Siouxsie Wiles have both been deeply involved in the government’s Covid strategies and management since the beginning of the pandemic, including regularly discussing the topic in public. But here they are castigating their academic peers who are defending scientific methodology.

The doozy in their open letter has to be this paragraph: “The professors present a series of global crises [including Covid] that we must ‘battle’ with science — again failing to acknowledge the ways in which science has contributed to the creation of these challenges. Putting science on a pedestal gets us no further in the solution of these crises.”

Say what? As New Zealanders wait anxiously to have a shot of an effective vaccine created by legions of scientists worldwide, they are being told by the microbiologist named the New Zealander of the Year for her leadership through the Covid-19 response and the scientist whose predictions of possibly 80,000 deaths from Covid helped put the nation into lockdown in March 2020 that science is not paramount in the fight against Covid.

The news that more than 2000 mainly academics and researchers have endorsed science being knocked off its pedestal will be music to the ears of those opposed to wearing a mask in public or wary of being vaccinated, who are routinely denounced for not “following the science”.

What is most disturbing about the open letter, however, is that by drumming up signatures in support it appears to be an attempt to silence an opposing viewpoint.

Dr Wiles reinforced that impression by tweeting: “Calling all academics in Aotearoa New Zealand. Add your name to the open letter if you are also appalled by that letter claiming to defend science published last week in the NZ Listener. It’s caused untold harm and hurt & points to major problems with some of our colleagues.

The troublesome defenders of science allegedly causing “untold harm and hurt” include an emeritus professor of philosophy, Dr Robert Nola, who is a member of the Royal Society and who has been studying, writing and lecturing in the philosophy of science for more than 45 years.

In late 2016, soon after Donald Trump won the US Presidency, Dr Nola wrote in the NZ Herald to warn about “post-truth”. As he put it: “This new, fancy word tells us: ‘Objective facts are less influential in shaping public opinion than appeals to emotion and personal belief.’ No need for truth, it is yesteryear’s notion…

“Insofar as studies in humanities have not resisted the views of post-truthers, too bad for humanities. But what of science? It would be quite alien for science to reject the search for truth and evidence, the core of its critical methods.

“In science we have models of what the rational approach to believing ought to be. If followed, they are an important way to keep the post-truth era from engulfing us.”

Less than five years later, it has become clear that Dr Nola’s warning has fallen on deaf ears. As the firestorm over the professors’ letter shows, New Zealand science is indeed being engulfed by the post-modern mantra that there is no such thing as objective truth.

And it is also clear that anyone who dissents must be silenced.