Dr Jock Allison is an agricultural scientist and a former Director of Research for the Ministry of Agriculture and Forestry.

Much has been written recently about the misrepresentation of the effectiveness of methane as a Greenhouse Gas (GHG).  Our paper published in September in The Journal (the official publication of the New Zealand Institute of Primary Industry Management)  – see HERE – concludes that methane is irrelevant as a GHG and so is nitrous oxide.

Further Prof David Frame from Victoria University has been active in the promotion of new research which rightly classifies methane as a “short lived” gas, and thus of minimal effect. This is because it stays in the atmosphere only about 12 years, and thus the treatment in the IPCC estimates as being 28 to 34 more effective than CO2 is not environmentally credible.

The fact that Government is taking this information seriously in their consultation of the Zero Carbon Bill is encouraging. Not only is methane having very little effect on warming, but the financial burden of allowing for a massive warming effect based on defective science can’t be justified. If this most recent estimate is accepted by Government then in effect we get rid of about 35% New Zealand’s total emissions in comparison to how they were previously assessed.

CO2 also has a short residence time in the atmosphere, but recognition of this fact hasn’t dawned on the IPCC and doesn’t seem to interest the member governments of the all the 170+ signatories to the IFCCC (International Framework  Convention on Climate Change) whose main aim seems to be a redistribution of wealth from developed to undeveloped countries.

The assumption of the IPCC and the various acolytes that CO2 has a residence time in the atmosphere of 200+ years, and perhaps more than 1,000 years can not be justified. Recent studies of the decay / disappearance rates of radioactive carbon in our atmosphere following nuclear tests in the Pacific from about 1948 to 1962 show a “half life” of 10 years only. CO2  can be removed from the atmosphere by plant photosynthesis and or dissolving in the oceans. 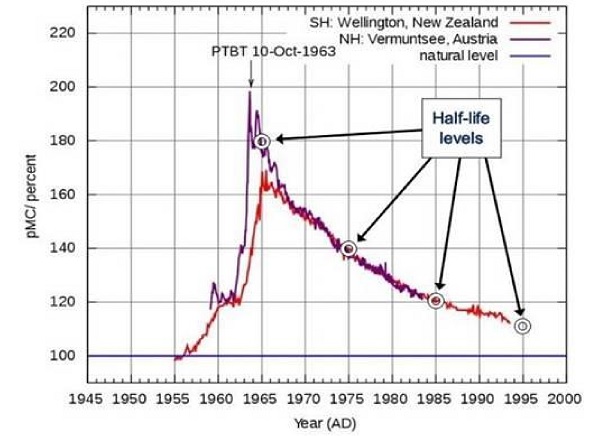 The above figure shows C14 data before and after the above-ground atomic bomb tests. The natural concentration of C14 CO2 is defined as 100%. The pMC percent scale is “percent of modern carbon” where “modern carbon” means the level in 1950. The white circles mark the half-life times.

The graph of C14 CO2 disappearing from the atmosphere shows that the concentration halves every 10 years. Under the principle of “equivalence”, C14 behaves in the same way as C12 CO2, so there is nothing to suggest that human CO2 (which is C12 CO2) will react or behave chemically or physically any differently from the C14 CO2.  The C14 CO2 gives a perfect labelled sample of CO2 allowing tracking of concentrations in the atmosphere over time.   It is not possible to differentiate between CO2 from human activities and the other naturally occurring CO2. It is clear however that of all the CO2 going into the atmosphere each year,  only about 4.5 ppm (parts per million) is from human activities and 98 ppm from natural sources.

This is a very different situation from IPCC claims (including New Zealand scientists advising our Government). The IPCC claim:

These are all wrong. The short half life of CO2 and the fact that methane and nitrous oxide – about 14% of NZ’s assessed emissions – are irrelevant makes the IPCC pronouncements not credible.

The latest science from Dr Ed Berry – see HERE – shows that as a result of applying the climate physics embodied in the C14 decay graph above, human CO2 cannot be responsible for all of the CO2increase in the atmosphere since pre-industrial times.  The result of the accepted equivalent half-life of C14 CO2, being 10 years only, and the fact that C12 CO2 will react chemically and physically in exactly the same way, results in the calculation of only 18ppm in the atmosphere being derived from anthropogenic (human derived) CO2.

On this basis, therefore, human CO2 cannot possibly be the “control knob” of global warming. Any efforts to diminish CO2 emissions or reduce atmospheric CO2 will not have any effect on the climate at all.

The calculated levels of CO2 from the decay rates defined from the study of the C14 after nuclear testing gives the results illustrated in the graph below: 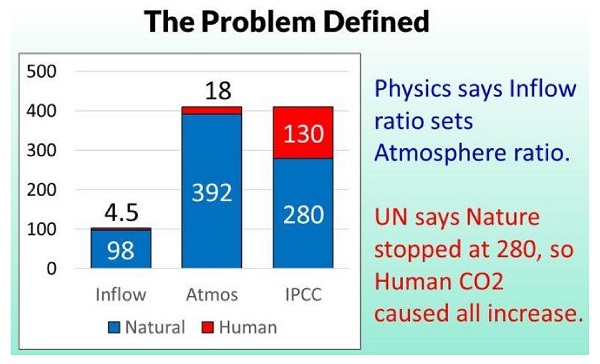 So, the “human activity-derived” CO2 in the atmosphere presently is 18ppm, not the 130ppm from human activity from 1850 as the IPCC contends. These data concerning rates of disappearance from the atmosphere are the only such data published, and show that:

Conclusion : Expensive emissions reductions programmes for the recognized GHGs will have minimal if any effect on climate in the future, and certainly those implemented at great expense in New Zealand (0.17% of the world’s emissions) while the rest of the world does little if anything about emissions from agriculture can only have one result. No effect on climate at great expense.

This comment applies to all of the proposed emissions reductions scenarios promoted from the recent October 2018, IPCC Report specifying urgency to reduce the world emissions by 50% by 2030. Clearly this is impossible as China has signalled country emissions to double by 2030 and similarly India has signalled a tripling of emissions by the same date. It can be predicted that a further 10% of world emissions will result from other very undeveloped countries in the period leading up to 2030. China therefore +29.5%, India +13.6% plus 10% = 53.1% over the present level of emissions before we start.

Further, increasing the concentration of CO2 in the atmosphere is not such a potential warming problem for the world as frequently promoted in the scientific literature, by governments and the media. Clearly water vapour is the dominant GHG. CO2 becomes less and less effective (at a logarithmic rate) as its atmospheric concentration increases. Thus, there is limited opportunity for additional CO2 to cause heating:

Increasing levels of CO2 cause less and less warming – adapted from Lindzen & Choi (2009).
This relationship is the basis of the MODTRAN atmospheric model, University of Chicago.

Also, from 1990 (the base date for Kyoto) to 2013 the world’s emissions rose by 60%, and to the end of 2017 will have risen another 3%. The IPCC Scenarios re temperature rise and the urgency to start massive emissions reduction programmes are simply not credible. The world temperatures are not rising see figure below: 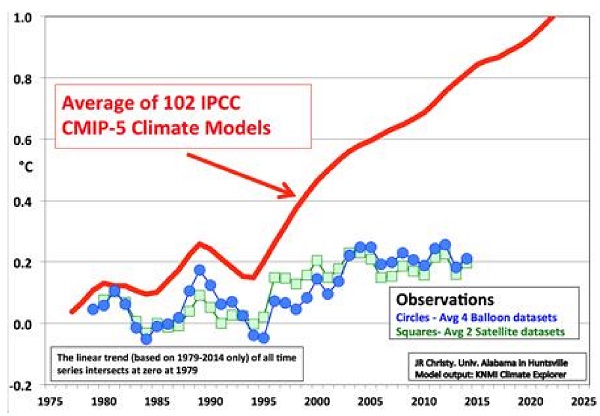 The trophospheric temperature from satellites and balloons is in the figure below. Apart from two significant EL Nino spikes in 1998 and 2016, temperatures are not rising – see HERE.

Dr Allison’s full paper on which this commentary is based can be seen HERE.