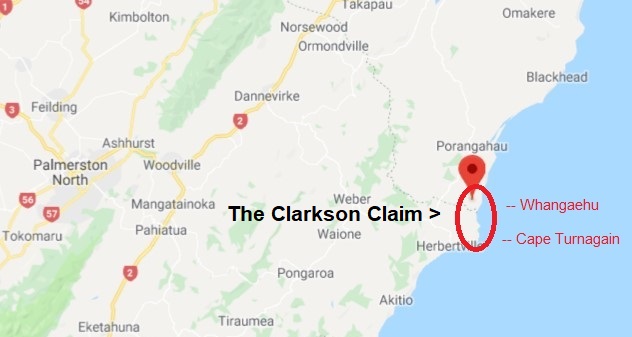 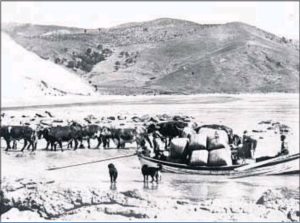 The coastline being claimed was the major transportation route right up until the inland roads were built in the 1930s (click to enlarge).

The High Court claim in the name of Catherine Clarkson, on behalf of the Poronia Hineana Te Rangi Whanau, for the southern Hawke’s Bay coastline from Whangaehu to Poroporo including Cape Turnagain, is now underway.

To succeed, the claimants have to convince a High Court Judge that they have used and occupied the area exclusively and continuously from 1840 to the present day according to tikanga.

If you have information that shows that such a claim cannot be correct, we would like to hear from you. Please email claims@nzcpr.com

In particular, we have provided a “My Evidence” template that you can use to set out your information.  It is in Word format, so if you open/download the document you should be able to type it as normal. Otherwise, please print it and write in your information then scan it and email it or post it to NZCPR, PO Box 984, Whangarei.

However, please read the instructions first as they provide a guide as to the sort of information that will be the most useful – see HERE. The “My Evidence” template for you to use is HERE.

A newspaper advertisement that has been published in the Hawke’s Bay Today newspaper, but could be used for more newspaper ads or as a household flier, can be accessed HERE.

The Clarkson claim is not the only claim lodged for the coast – there are six overlapping claims as well.

Following is some background explaining why the claims have been lodged, then we provide details on all of the overlapping claims, with maps and links to the claim applications lodged in the High Court.

If you have questions about any of this, please email us on claims@nzcpr.com. Also please note that we provide regular updates on developments regarding the claims process through our free NZCPR Weekly newsletter – you can register for the mailing list HERE.

Under common law, New Zealand’s coastline and Territorial Sea were owned by the Crown on behalf of all New Zealanders.

However, following a controversial ruling in the Court of Appeal in 2003 that some customary title might exist in the foreshore and seabed area and that any such claim should be investigated by the Maori Land Court, Catherine Clarkson and hundreds of others lodged claims for the coastline up and down the country.

Since the Maori Land Court has the power to convert customary title to private title that can be sold, the Government of the day feared that the whole coast could end up being privatised. As a result, they passed the 2004 Foreshore and Seabed Act to restore Crown ownership of the coast but allow tribal management of claimed areas.

However, the National Government, at the behest of their Maori Party coalition partner, changed the law in 2011 to repeal Crown ownership and introduce the Marine and Coastal Area Act – see HERE – to allow tribal groups to again claim the coast.

National said that under the new law, which required claimants to have used and occupied the area exclusively and continuously from 1840 to the present day according to tikanga, there would only be a few claims for remote parts of the coastline. But instead over 600 claims were lodged covering every single beach many times over – and stretching out 22km to the edge of the Territorial Sea.

Some of the claims that were originally lodged in the Maori Land Court and transferred to the Foreshore and Seabed Act, were then transferred to the Marine and Coastal Area Act. The Clarkson claim was amongst them. These claims have now been given priority status in the High Court under section 125 of the new Act .

The first of these priority claims to be progressed to a hearing is the Clarkson application – see details below.

If you believe that the claimants have NOT used and occupied the Hawke’s Bay coastal area exclusively and continuously since 1840, then we need your help. Please complete the “My Evidence” template HERE and send it to claims@nzcpr.com.

The New Zealand Centre for Political Research is a public policy think tank that opposed the repeal of Crown ownership of the coast. We have been working with groups who are opposing the claims in the public interest, but we need more detailed information that shows the claimed areas of the coast have been used by generations of New Zealand families not ‘exclusively’ by tribal groups.

We are very grateful for your help. And if you would like more background reading on this whole sorry saga, please go to our homepage HERE and enter the word coastal or foreshore into the website search function and you will be able to see dozens of articles that were have written about this over the years.

The Clarkson application CIV-2011-485-789 that was lodged in the High Court can be seen HERE.  The customary marine title area specified is described as Whangaehu to Poroporo including Cape Turnagain. It can be seen below – but, if you scroll down to the multi-coloured High Court map, you can see it as the red 122. (If the map doesn’t load, please refresh the page) 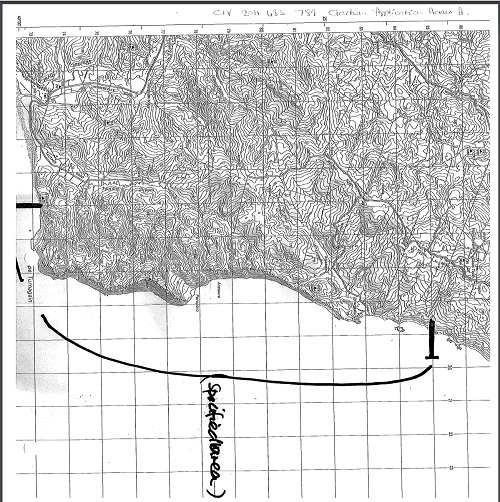 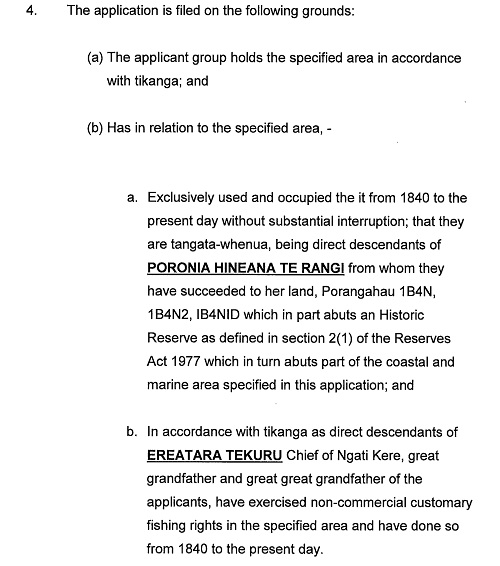 If you do not agree that the Clarksons have exclusively and continuously used and occupied the claimed area from 1840 to the present day, then please let us know by emailing your “My Evidence” document to us.

There are six claims that overlap with this application. They are:

Two of the overlapping applications, CIV-2017-404-538 by Rihari Dargaville and CIV-2017-485-512 by Cletus Maanu Paul, are known as “National applications” since they are claiming the entire coastline of New Zealand therefore they overlap with all applications.

The applications are shown on the High Court map below (the coloured reference number has been listed for each claim to make it easier to see – 121, 123, 124, 127). 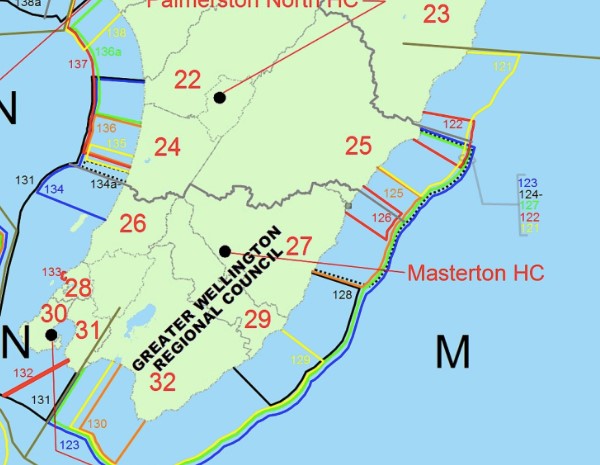 Details about each overlapping claim are as follows:

Claiming all of the coastline of New Zealand including offshore islands.

Claiming all of the coastline of New Zealand… 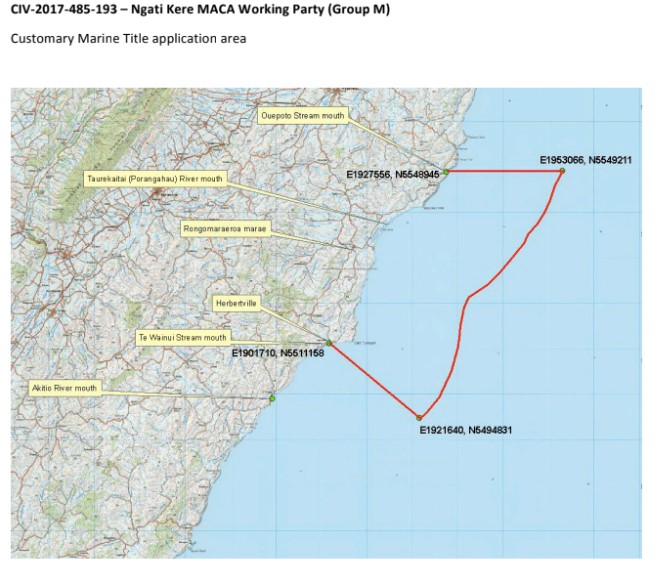 It  was stated in the application, that having a reduced title area was to avoid lodging a claim that overlaps with their Southern neighbours (Te Hika o Papauma and Rangitane), however they would consider amending their customary marine title application if no other applications overlapped (as it turns out there are a number of overlapping applications anyway).

The customary activities that would be undertaken include (but not limited to):

This group is currently pursuing a Crown engagement. 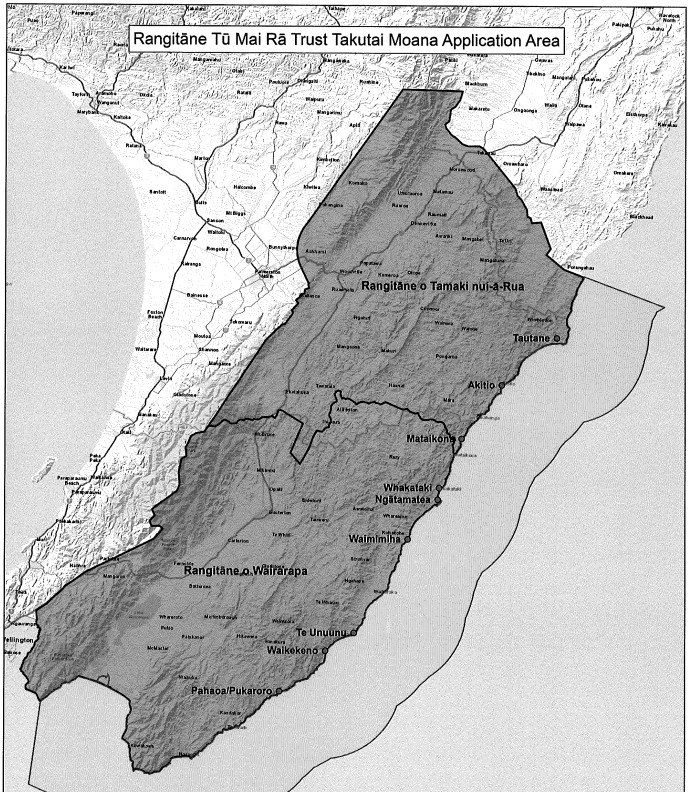 They are also applying for protected customary tights for rights including:

This area that this application relates to is from the Whareama river mouth up to Poroporo to the outer limits of the territorial sea.  This includes the common marine and coastal area of reefs, tidal rivers, streams and estuaries. 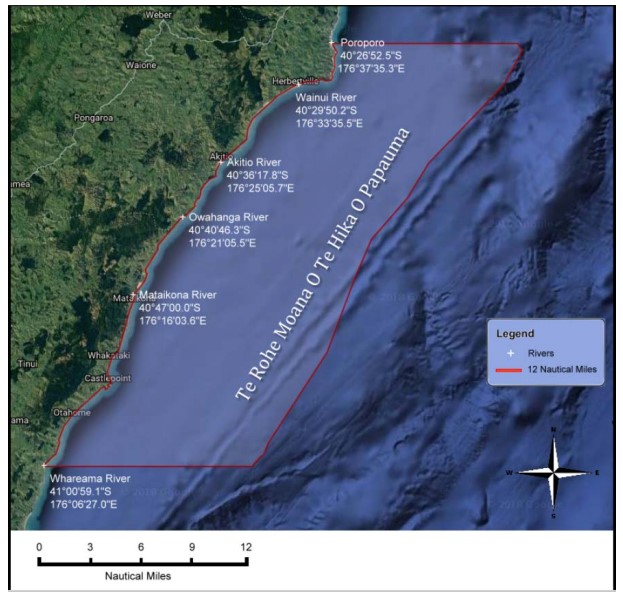 The activities that the Protected Customary Rights are based on include:

This application area starts at a point just north of Poroporo down to Turakirae Head. 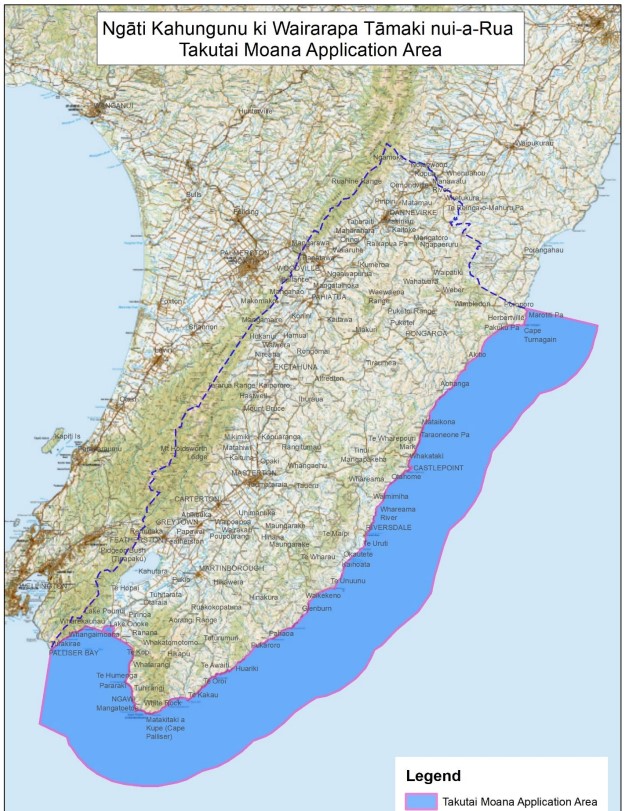 The Protected Customary Rights orders they are seeking would give them the right to:

Please don’t forget, if you believe that the claimants have NOT used and occupied the Hawke’s Bay coastal area exclusively and continuously since 1840, then please complete the “My Evidence” template HERE and send it to claims@nzcpr.com.