Professor John Gibson of the School of Accounting, Finance and Economics at Waikato University was previously Chair of Economics at Canterbury University, and taught economics at Williams College in the US.

One would not know it from the saturation advertising in New Zealand urging people to get booster doses of COVID-19 vaccines but the use of boosters for the general population has been controversial in many countries. In September 2021 an advisory panel of experts to the US Food and Drug Administration (FDA) voted 16-2 against widespread use of the boosters due to the lack of safety data and to doubts about the benefits of mass boosting.

After the Biden administration over-ruled that vote, and went ahead with a booster rollout for the general population (mandated in many cases) the top two officials in FDA’s Office of Vaccines Research and Review resigned and published a critique that current evidence did not show a need for boosting in the general population. Even the World Health Organization argued that a vaccination strategy based on repeated booster doses of the original vaccine composition is unlikely to be appropriate or sustainable.

The boosters in New Zealand are just the original Pfizer/BioNTech BNT162b2 recipe, so this repeated use may fixate people’s immune system to respond to the original Wuhan strain of SARS CoV-2 that is no longer circulating. Accumulated dosage also rises with booster use. In the initial randomized trials for mRNA vaccines, the Moderna shots that use a higher dose (100mg versus 30mg for Pfizer) had higher rates of serious adverse side-effects. So using the Pfizer boosters may cause this same dose-dependent vaccine adverse events process.

Thus, compared to the rollout of the original protocol doses, the booster rollout is likely to have fewer benefits and greater harms. It would therefore be expected that stronger evidence underpins mass use of boosters compared to the evidence used for the initial vaccine rollout. Yet perversely the evidence for using boosters is weaker, with large randomized trials either not being done or having various biases that inflate apparent vaccine efficacy.

Thus, overseas health professionals have called for booster vaccinations to be discontinued for safety reasons, and have suggested that coercive vaccine policies are doing more harm than good. None of these overseas debates appear to influence local public discussion. Even the data on which local public discussion are based are subject to doubts, as the Ministry of Health appear to be denominating their calculations of COVID-19 case and hospitalization rates with incorrect population estimates that will systematically overstate apparent vaccine efficacy. These same biases are found in health statistics overseas.

Despite these biases, and the limitations placed on local debate, at least one source of data is open to all of us, so that we can see with our own eyes and make up our own minds, rather than being told what to think. Statistics New Zealand publish weekly counts of deaths, for four age groups: 0-29 years, 30-59 years, 60-79 years, and 80 years and above. These data are available here, under the “health” tab (note that the data for recent weeks are not final).

These data are for all-cause mortality, which should be the most reliable health indicator as there can be no argument that someone is dead or not. In contrast, data on COVID-19 deaths are bedevilled by classification issues: was the death with COVID-19 or by COVID-19. The other helpful feature of all-cause mortality is to let net effects of interventions be studied, taking account of unintended consequences. For example, if vaccines reduce deaths from COVID-19 but increase cardiovascular deaths, there may be no net reduction in mortality risk but a narrow fixation of health authorities on COVID-19 deaths would miss that failure.

The weekly deaths data allow ‘excess mortality’ to be calculated; the extent (either as a rate or as a number) by which actual deaths exceed expected deaths. Expected deaths can be calculated from weekly averages for a prior period. For example, public health researchers compared week-specific average death rates from 2015-19 to death rates in the same weeks in 2020, when arguing that lockdowns had no apparent adverse effects on mortality.

Averages do not allow for factors that change over time, yet in New Zealand population fluctuates a lot with migration. So expected deaths can also be calculated using regressions (a statistical procedure to adjust for multiple factors) to deal with various changing influences. Using this approach shows that for New Zealand in 2021-22, expected deaths peak at about 750 per week in late July, and have an annual low of about 610 in mid-February.

For the year from April 2021 to March 2022, covering the main phase of COVID-19 vaccine and booster rollouts, actual deaths and expected deaths moved closely together for the first eight months. Thereafter deaths deviated from the usual seasonal pattern; fluctuating around 650 per week until late February rather than falling to 610 per week as expected. March 2022 saw a sharp rise in deaths by about 100 per week over their expected number.

The excess deaths are cumulated and shown in the figure below. For the first eight months, cumulative totals fluctuated around 0 in a fairly narrow band (rarely exceeding ±100). But from December cumulative excess deaths rose from -100 to over +300 by the end of February, and then rose more sharply, to +800 by the end of March. The sustained rise in excess mortality from December coincides with the booster rollout. 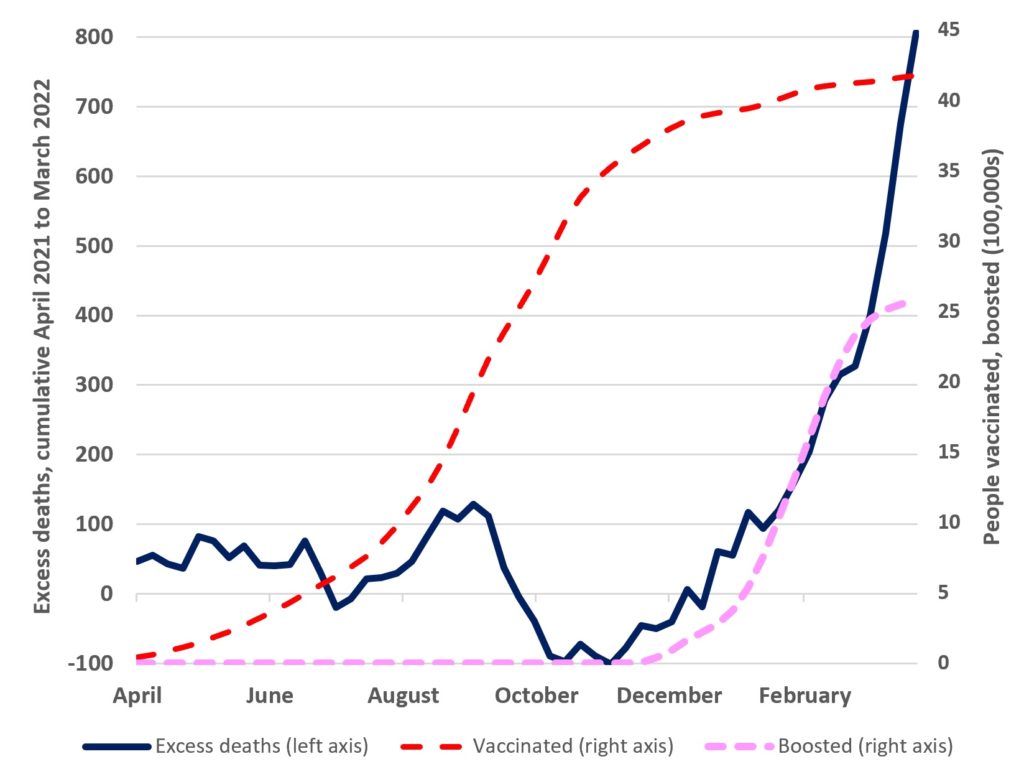 While the number of people receiving booster vaccines went from zero to just over 2 million, cumulative excess deaths went from -100 to +400. Prior to the booster rollout there had been no upward trend in excess deaths. This rise in excess deaths is unlikely to be due to Omicron, whose community spread was only detected in New Zealand at the end of January and given the lag from infection to death was unlikely to show up in increased deaths data until March.

The visual evidence in the figure is compelling but stronger evidence comes from statistically examining week-by-week changes. Series trending upwards together may seem to be related when they are not so if changes in two variables move together it is more convincing. For the booster vaccine rollout and excess deaths, using data on the changes in the series in the figure shows that there were 16 excess deaths per 100,000 booster doses. This same estimate is obtained when using a method that exploits exogenous variation (a method popularized by the winners of the Nobel prize in economics in 2021). Given that over 2.5 million booster doses have been administered, this amounts to over 400 excess deaths.

More evidence that rising excess mortality while boosters were rolled out is not a coincidence comes from the age-disaggregated data. The 0-29 years age group are mostly too young for boosters and so their excess mortality rate should not change between the booster era and the pre-booster era. In contrast, the other three age-groups were all eligible for (or mandated to have) boosters. The elderly were some of the first groups to be originally vaccinated and so have more elapsed time to be eligible for boosters. To the extent that they have a higher rate of booster usage they would therefore be predicted to see the biggest rise in excess mortality. 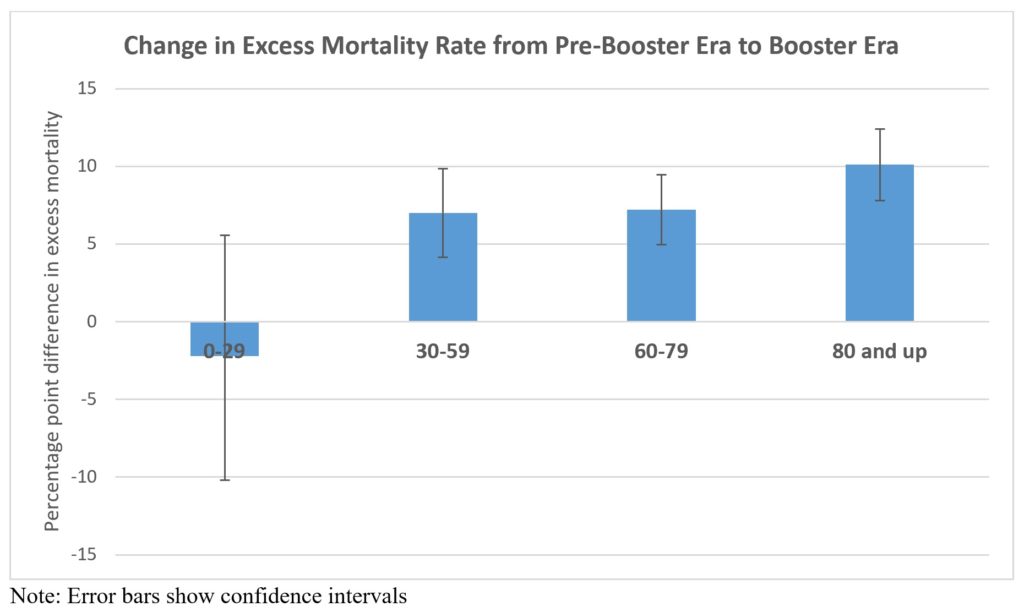 Compared to the pre-booster era (April to November) the excess mortality rate for the 80 and over group was 10 percentage points higher in the booster era (December 2021 onwards). For the 30-59 and 60-79 age groups, excess mortality rates rose seven percentage points as boosters rolled out. Yet there is no rise in excess deaths for the youngest age group. In other words, age groups most likely to use boosters show large rises in excess deaths after boosters are rolled out while the age group least likely to use boosters had no rise in excess deaths.

Alternative explanations need to account for two patterns in the empirical evidence: a sharp rise in excess mortality from the time that the booster rollout began, which is concentrated in the age groups eligible for boosters but not at all apparent in the age group mostly ineligible.

There are also other sources of evidence if our health authorities could be motivated to do a proper job of safety monitoring (and parroting the CDC and FDA does not count, given the failure of those agencies to protect consumers). The currently passive monitoring of vaccine adverse events relies upon spontaneous reporting and with the saturation advertising message of ‘safe and effective’ some people who suffered adverse events likely did not connect them to the vaccines. There are several active surveillance approaches to studying adverse events that could instead be used.

More broadly, a comprehensive cost-benefit analysis of the COVID-19 booster rollout should be conducted. Independent cost-benefit studies for the earlier interventions, like lockdowns, show that these did more harm than good. The excess mortality associated with the booster rollout that is highlighted in this analysis should be a key part of any future cost-benefit analysis of decisions about using COVID-19 booster vaccines for the general public.