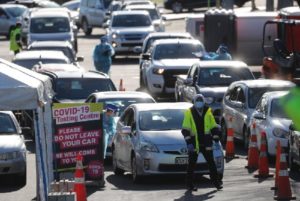 The news that Auckland was being ordered into an Alert level 3 lockdown for three days, and the rest of New Zealand into Alert Level 2, came as a blow to a country that is still struggling to recover from a lockdown assessed as “the most stringent in the world”.

Prime Minister Jacinda Ardern had justified her hard-line approach on the basis that the virus would be “eliminated”. But the new outbreak shows how unrealistic that was. The re-emergence of the virus confirms the warnings of health experts who said from the beginning that influenza viruses like Covid-19 are too infectious to eradicate.

The original four Covid-19 cases were discovered in a South Auckland family, with no known connection to overseas travel or to anyone who works in isolation facilities or at the border.

A woman in her 50s had a fever and cough for five days before being confirmed positive, and the Mt Eden finance company where she works has been shut down with 130 employees now being tested.

Her husband, who had been on sick leave for nine days with flu-like symptoms, tested positive for Covid-19 on Monday, after first being sent for a test the previous Thursday. All 26 employees at the cold storage facility for imported goods in Mount Wellington where he worked had been sent home and were being tested.

One of the couple’s daughters – a woman in her twenties – and her pre-schooler tested positive, while her partner and a second daughter of primary school age, were negative.

Meanwhile, the infected mother had visited her brother and his teenage daughter who attends Mt Albert Grammar School, while the infected elder daughter and her pre-schooler had travelled to Rotorua and Taupo for a holiday and to visit relatives.

To date, thirteen more cases were identified yesterday – mostly work colleagues and family members – and thirteen more today. All except one, which is still undergoing investigation, can be related back to the original cluster.

The outbreak has raised questions about who knew what and when.

Doubts have arisen because the Government, which had “eliminated” Covid-19 for over three months, had suddenly begun issuing warnings about the potential for community transmission and lockdowns. They also did a U-turn on facemasks, changing from vehemently opposing them to recommending that everyone get one – ‘just in case it’s needed’. There must have been a trigger event to cause such a significant shift in the Government’s PR messaging.

Newstalk ZB’s Mike Hosking asks, “Just why, when we were celebrating 100 days of no community transmission, is the government launching ‘yes to the test’, and telling us to buy masks? There was suspicion, that proved correct. Did they know something was wrong and didn’t tell us?”

As a result of his investigations, veteran political journalist Richard Harman reports:

“The Director-General of Health, Ashley Bloomfield, confirmed that he was made aware there was a potential case in South Auckland just before 3 pm on Monday. ‘That person was swabbed yesterday (Monday) when they presented to their general practitioner with symptoms,’ he said. ‘That test was processed twice and returned positive.’

“So on Monday, Bloomfield had a positive test result for one person in South Auckland. However, the Prime Minister said the first she learned of the case was late yesterday afternoon [Tuesday]… ‘roughly 4 pm’.”

So, is it feasible that the Director General of Health would deliberately withhold the information about a new case in the community from the Prime Minister on Monday, only informing her 24 hours later on the Tuesday?

Richard Harman believes there were earlier indications that something was amiss:

“There are other signs that the Government was expecting something like what has happened. On Friday, the Officials Committee for Domestic and External Security Coordination held an unscheduled meeting. No one knows what that was about but Covid would be highly likely to be on its agenda. The same day, Bloomfield, began a campaign to show how to wear masks and suggested people should wear them one day a week to get used to them. If there are further outbreaks of Covid-19, masks will be another important component for the Government’s strategy, he said.”

There have also been four unexplained cases of travellers from New Zealand arriving in their home countries and testing positive for Covid-19 – one arriving in South Korea, two in Australia, and the latest arriving in Japan this week.

With the Director General now belatedly admitting that the virus may have been circulating within the community for weeks, questions are now being raised about the truthfulness of the messages that have been coming out of the Beehive.

Certainly, concerns that front-line health workers were chronically short of protective equipment were consistently raised during the pandemic only to be brushed off and denied. Later investigations, however, not only revealed the shortages existed, but that they also contributed to some of the Covid-19 deaths.

It was the same story with the flu vaccine – with the public being urged to get vaccinated, doctors complained of shortages, which were denied by Ministers and the Director General. However, a TVNZ investigation confirms that the public were being misled.

And this week we have seen a repeat of the same story over testing swabs – GPs say they do not have enough while the Director General says there are plenty.

These are not the only examples of an inconsistency between what the Director General and Government politicians are saying, and what is actually happening. Alarmingly, it now appears the regular testing, that had been announced was being put in place for all staff coming into contact with high risk travellers, was never introduced.

Back in June, following the release of two infected and untested sisters from managed isolation, who travelled from Auckland to Wellington, the then Minister of Health David Clark announced the new procedures. Not only were quarantined passengers to be tested on day 3 and day 12 of their 14 day stay – and not allowed to leave unless they returned a negative result – but all staff involved in the airport and isolation facilities, were to also be regularly tested.

In his press release, the Minister said, “Under our enhanced strategy, priority for testing will be given to those who are most likely to have been exposed to Covid-19 which is our border and airline staff… These workers include: Border workers in customs, biosecurity, immigration and aviation security at airports, and the people who clean at international airports or maritime ports; Staff who work in managed isolation and quarantine facilities, including those who drive people entering the country from the airport to the facilities; International air and maritime crew.”

But this week frontline Air NZ workers have revealed that’s not happening. With managed isolation facilities in Auckland reaching capacity, returning Kiwis are being flown from Auckland to Wellington to undertake quarantine.

One such flight operated last week without proper safeguards, sparking concerns that it will “only be a matter of time” before a flight attendant catches Covid-19 from one of the passengers and becomes a source of community transmission.

The crew on those special flights have been refused full personal protective equipment for the duration of the journey, and nor are there any requirements for the crew to isolate after the flight. Instead they are free to operate regular scheduled flights immediately afterwards.

Reports have also emerged that bus drivers ferrying returning passengers from Auckland Airport to hotels in Hamilton and Rotorua are not being tested even though they are in close proximity to infected passengers for hours on end. Some drivers say they have never been tested – not even once.

There have even been reports about people working in isolation facilities not wearing face-masks – as Newstalk ZB’s Kate Hawkesby explains: “And speaking of masks, I was sent a photo yesterday, of someone staying in managed isolation at one of the Auckland quarantine Hotels. They were surprised with all this mask talk going on, how few people inside the actual hotel were wearing them. Inside the lobby, where the photo was taken, there was a barista standing at a coffee machine, with a security guard in front of him waiting for a coffee, alongside a guest waiting for a coffee too. None of them were wearing masks. If ever there was going to be a risk of community transmission, I would’ve thought surely that’s it?”

These types of risks were identified in a Health Ministry report, Minimising the risk of a Covid-19 outbreak from border arrivals, that was leaked to the media last week. It says that frontline workers caring for travellers – including airline crew, customs officers, caterers, hotel staff, security, cleaners and bus drivers – posed a greater risk of spreading Covid-19 into the community than returnees breaking isolation rules.

And with a new report from Newshub confirming that almost two-thirds of Auckland’s 3,000 border and quarantine workforce has never been tested, it is clear that the Government’s promise of regular testing of all workers involved in keeping our borders safe has not been fulfilled.

Is this how Covid-19 has leaked into our community?

It is certainly thought to be what happened in Victoria in Australia – that the virus was spread to the community from a quarantine facility worker.

Given the lackadaisical approach by the Government to border management that has been reported by workers, it certainly looks as if their failure to keep our borders secure may have led to this community outbreak that has closed down Auckland and put the rest of the country at risk.

The Deputy Prime Minister certainly thinks so, revealing to Australian television that the new Covid-19 cluster is linked to a breach in New Zealand’s quarantine system.

With all election campaigning on hold, and Auckland in a partial lockdown, Judith Collins is now calling on the Government to postpone the election until later this year or early next year: “We just can’t go through a full general election based on postal ballots and things like that, it’s untenable.”

While the Electoral Commission has planned for the election to go ahead under level 2 restrictions, having some regions of the country at level 3 or higher would make it virtually impossible to run. Accordingly, the Government decided to delay Wednesday’s scheduled dissolution of Parliament to give it time to properly assess whether a September 19 election day is still feasible.

“However, that writ has not yet been issued and is not planned to be until August 16. As such, there is not yet any legal requirement that September 19 be our polling day. Should the prime minister conclude the planned election date is no longer tenable, she can simply nominate another Saturday instead. She is free to pick any date until early December, by which point the law says an election must be held as parliament’s three-year term elapses.”

Professor Geddes also explains that under new amendments to the Electoral Act, the election could be delayed until next year if there are concerns that 2020 will not be safe enough to vote.

The Prime Minister has said a decision on the election will be made on Monday. Whatever the result, having a free and fair election is paramount. If Auckland is required to remain under a partial lockdown, it is difficult to see how that can occur.

*Should the election be held on September 19 as planned or should it be delayed?