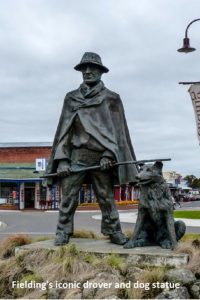 “Every record has been destroyed or falsified, every book has been rewritten, every picture has been repainted, every statue and street and building has been renamed, every date has been altered. And that process is continuing day by day and minute by minute. History has stopped. Nothing exists except an endless present in which the Party is always right.”
– Winston Smith in George Orwell’s 1984.

New Zealand is not immune from the consequences of protests over the tragic death of George Floyd at the hands of US Police being captured by political extremists pushing their own radical agendas.

“Over the years, I have repeatedly warned that the refusal of the political establishment to defend the integrity of the western nation and its culture has opened the way for noxious forces to occupy the vacuum… Now the British establishment is kow-towing to a movement which is behaving like the Taliban, pulling down statues and other artefacts in order to erase aspects of British history as the product of a rotten society that’s institutionally racist and so must be supplanted by another.”

She describes the vandalising of statues of Winston Churchill and Queen Victoria in the UK and draws similarities with the Taliban in 2001 toppling ancient monuments in Afghanistan – to the horror of the western world.

These events evoke memories of some of the darker periods of human history when rational thinking gave way to dangerous fanaticism, including book burning in Nazi Germany, and the destruction caused by Chairman Mao’s Red Guards during the Cultural Revolution.

Even well-loved classics in film and television are no longer safe these days – ‘Gone with the Wind’ and episodes of ‘Faulty Towers’ are amongst the treasures now being withdrawn from view.

Melanie Phillips believes that by failing to act, society’s leaders are complicit: “The establishment is effectively condoning a sustained and organised onslaught which is taking place against not just a number of stone images but a culture’s historic memory.”

She describes Black Lives Matter as “a racist, anti-white, anti-west violent revolutionary movement” which aims to overthrow white western society by “overturning capitalist society because it is white and therefore deemed intrinsically evil”.

Yet instead of resisting their racist and dangerous agenda, Melanie Phillips describes how the political establishment has “fled the cultural battleground in order to cower, wringing its hands, at a distance”.

That was certainly the case in New Zealand last Friday, when Hamilton’s Mayor Paula Southgate had the statue of the city’s namesake, British naval commander Captain John Hamilton, removed – as the result of a request and a threat.

The request was from Tainui, the iwi that supported the original decision to accept the bronze statue as a gift to the city from the Gallagher Group seven years ago but now appears to have changed its mind: “In an email to council chief executive Richard Briggs, sent at 4.59pm on Thursday, Waikato Tainui chief executive Donna Flavell asked the council to consider the immediate removal of the statue from Civic Square. Flavell said she was aware the council was meeting on Friday and asked him to put the request to councillors then.”

The threat received by the council was from 80-year-old Taitimu Maipi of Huntley, who had vandalised the statue in 2018. At that time, he was arrested by police and received a pre-charge warning, which was supposed to act as a deterrent and an alternative to prosecution for offences of not more than six months’ imprisonment. The deterrent didn’t work as last Thursday he threatened to vandalise the statue again.

But instead of notifying police and taking steps to protect the statue the Mayor authorised its removal. Not content with that outcome, Tainui now wants the name of the city changed as well.

Demands for the removal of ‘offensive’ statues and monuments, city and street names, is escalating – and going from the bizarre to the ridiculous. Complaints have even been made about Fielding’s iconic bronze drover and dog statue on the basis that “To speak of the early settlers as being the ‘life blood’ of the land is to completely deny the indigenous blood that flowed here first.”

The Maori Party, which is sitting at one percent in the polls and desperately needs traction before the election, has called for an inquiry.

As Newstalk ZB’s Heather Du Plessis-Allan explains: “I think we’ve had a good insight into how the Maori Party is planning to spend the days through to the election. And that is to whip up racial tensions. In the space of just 24 hours, they made political play out of the colonial statues, calling for an inquiry but then saying it should only include Pakeha statues and only consider Maori grievances, excluding any other ethnicity with gripes and any controversial Maori figures.”

The Maori Party’s co-leader Debbie Ngarewa-Packer claims, “We still honour some of the most racist and oppressive figures from our colonial history… I am calling on Prime Minister Jacinda Ardern and her government to work alongside hapu and iwi Maori… to undertake a comprehensive inquiry into colonial monuments and statues, place names, and street names… What we are asking is that… iwi and hapu with the government decide.”

Not only does the Maori Party appear to place no value whatsoever on the view of other New Zealanders, but their racist elitism ignores the record of Maori tribalism. Just as all of history is replete with events and practices that are no longer acceptable in a modern world, they are no exception.

Slavery, cannibalism, and infanticide were all practiced before colonisation, with some customs taking years to stamp out. In fact, it was two decades after the first missionaries arrived in New Zealand, that the genocide of the Moriori on the Chatham Islands took place, where hundreds of peace-loving inhabitants were slaughtered, eaten, and enslaved by Maori.

The reality is that separatists pushing for Maori sovereignty want to abolish the evidence of New Zealand history so they can re-cast it in a way that suits their racist agenda.

Rather than erasing historical monuments and memories, they should be preserved as part of an evolution that makes us what we are today – better and wiser through experience.

We urgently need our political leaders to stand up and defend the evidence of New Zealand’s past – including our right to an accurate portrayal of our nation’s history.

So where do the politicians stand on this controversy?

In his latest Straight Talk blog, political commentator Frank Newman outlines the position of National’s new leader: “Todd Muller is showing his true worth as the leader of the National Party. In a speech at the Te Puna Rugby Club on the weekend he added his thoughts to the debate about the removal of the Captain Hamilton statue: ‘It’s not for a leader of a political party to say what statue goes or stays… One of the strengths of our country is we are able to have the capacity for conversations like this’… Great to have that cleared up!”

The Green Party co-leader Marama Davidson was more direct – and radical: “I support the protests against these monuments of oppression”.

New Zealand First’s leader Winston Peters has also expressed strong views, opposing this ‘wave of idiocy’: “A self-confident country would never succumb to obliterating symbols of their history, whether it be good or bad or simply gone out of fashion. A country learns from its mistakes and triumphs and its people should have the knowledge and maturity to distinguish between the two.”

While Winston Peters’ comments will have resonated with many New Zealanders bewildered by the dearth of leadership condemning the radicals threating their communities, it’s important to remember that like the Maori Party, New Zealand First is struggling to reach the five percent threshold to get back into Parliament.

The party knows race-relations is a ‘hot button’ issue and a point of difference. In 2017, many New Zealanders supported the party as a result of their “bottom-line” promise to hold a referendum on the future of the Maori seats. Yet even though Winston Peters was the ‘kingmaker’ after the election and chose the government, he failed to deliver on his election promise.

In response to similar claims of institutional racism in the US, research by Manhattan Institute fellow Heather Mac Donald, shows there is no structural racial bias in the criminal-justice system with regard to arrests, prosecution or sentencing.

She finds it is criminal behaviour, not race that determines most police actions. “In 2018, the latest year for which data have been published, African-Americans made up 53 percent of known homicide offenders in the US and committed about 60 percent of robberies, even though they represented only 13 percent of the population.”

If protesters were rational in their demands to reduce the number of Maori in prison, instead of blaming institutional racism or the Police they would address the real cause of criminal offending, which was clearly outlined by US President Barack Obama in a Fathers’ Day speech in 2008:

“Of all the rocks upon which we build our lives, we are reminded today that family is the most important. And we are called to recognize and honour how critical every father is to that foundation. They are teachers and coaches. They are mentors and role models. They are examples of success and the men who constantly push us toward it.

“But if we are honest with ourselves, we’ll admit that what too many fathers also are is missing — missing from too many lives and too many homes. They have abandoned their responsibilities, acting like boys instead of men. And the foundations of our families are weaker because of it.

It’s the same story here in New Zealand. The rise in the breakdown of the family – especially the Maori family – has been catastrophic. It is and always has been the root cause of social deprivation, violence, and crime. Reducing sole parenthood and intergenerational welfare dependency is at the heart of the solution.

Calls for race-based laws and greater taxpayer funding are all part of an ambitious power grab by sovereignty activists who want to see the governance of New Zealand pass to the Maori tribal elite. The problem is that most people are completely unaware of how far this dangerous agenda has advanced.

*Do you support the removal of colonial era statues, monuments, street and community names deemed by some to be ‘offensive’?