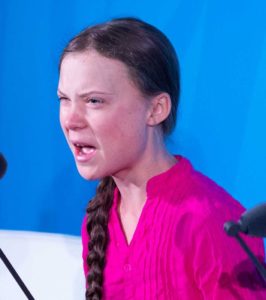 “This is all wrong. I shouldn’t be standing here. I should be back in school on the other side of the ocean. Yet you all come to me for hope? How dare you! You have stolen my dreams and my childhood with your empty words.”

She’s right, of course – she should be back in school, as should all of the other young people that she has incited to strike for climate action. In particular, they should be learning science so they can better understand how they are being manipulated by agenda-driven extremists, who are using global warming scaremongering as a ruse to undermine economic freedom and expand government control.

In her address to the UN, Greta Thunberg claimed, “For more than 30 years the science has been crystal clear. How dare you continue to look away, and come here saying that you are doing enough, when the politics and solutions needed are still nowhere in sight. You say you ‘hear’ us and that you understand the urgency. I don’t want to believe that. Because if you fully understood the situation and still kept on failing to act, then you would be evil.”

But it is the agenda she is promoting that is evil. To address the non-existent threat of man-made global warming, weak politicians, who haven’t the courage to stand against the prevailing dogma, are implementing policies that will destroy entire industries and undermine living standards. Millions of people will lose their jobs. Businesses that have been thriving for generations will be forced to shut down. Zero carbon laws will ensure electricity and fuel prices go through the roof. The agricultural sector will be decimated, causing food prices to escalate. Families will struggle to get by. The hardest hit will be the poor.

In dismissing such sacrifice as irrelevant, the climate movement’s new messiah is revealing the ruthlessness of their crusade.

It is truly a sad commentary on the state of Western civilisation when the world stands still to hear the doomsday predictions of a child not yet old enough to be trusted to vote. It demonstrates that climate change is no longer about science but social change. To be blunt, it’s about the destruction of free market economics and the rise of collective socialism.

But who is behind this dangerous campaign? It is certainly not a young girl and her parents acting alone.

So who is it, who is pulling the strings and manipulating her agenda of hatred against our generation?

Dominic Green, a journalist with Standpoint magazine says that behind the ‘climate warrior’ lies lobbyists, investors and energy companies seeking to profit from a green bonanza.

He explains that Greta Thunberg’s parents, actor Svante Thunberg and opera singer Malena Ernman, were publishing a book on how saving the planet had saved their family, when they became involved with Ingmar Rentzhog, the founder of the social media platform We Have No Time and a protégé of the former US Vice President Al Gore.

Ingmar Rentzhog, a  media entrepreneur and member of the European Climate Policy Task Force – which is part of Al Gore’s Climate Reality Project – received his training from Mr Gore in March 2017 in Denver, and again in June 2018 in Berlin.

In February 2018 the leader of the Swedish Fossil Free Dalsland group invited a group of environmentalists, academics and politicians to plan how to involve young people in climate activism in order to increase the pace of transition to a green energy future. In May, the winners of an environmental writing competition run by a local newspaper were approached with the idea of a “school strike”, modelled on the student walk-outs after the shootings at Parkland in Florida. Greta, who had won second place, was interested in protesting outside of the Swedish Parliament. Ingmar Rentzhog was informed and ensured her protest went viral. The rest is history.

Dominic Green says, “Greta’s parents are just an ordinary pair of parent-managers who want to save the planet. Query their motives, and you risk being accused of ‘climate denial’, or of bullying a vulnerable child with Asperger’s. But the Greta phenomenon has also involved green lobbyists, PR hustlers, eco-academics, and a think-tank founded by a wealthy ex-minister in Sweden’s Social Democratic government with links to the country’s energy companies. These companies are preparing for the biggest bonanza of government contracts in history: the greening of the Western economies. Greta, whether she and her parents know it or not, is the face of their political strategy.”

In other words, according to Dominic Green, a powerful industrial complex with commercial interests in green energy is behind the fresh-faced Greta Thunberg and the youth climate movement.

Using children for political ends to this degree is not something we have really seen before. Activists have mostly been principled enough to leave children out of their campaigns, and politicians generally confine their exploitation to photo opportunities.

But not anymore – those seeking to capitalise on “the biggest bonanza of government contracts in history” clearly believe sacrificing the innocence of children is justified.

Unfortunately prophets of despair, like Greta Thunberg, have the potential to cause significant social disruption.

So too does our own Prime Minister, who described climate change as her generation’s ‘nuclear free moment’. In her speech to the UN Climate Summit, she said, “Recently in New Zealand our journalists, like many around the world, took part in the Covering Climate Now campaign. During this campaign one story detailed a dramatic hypothetical account of our country in the year 2050. It played out the scenario of the world missing our 1.5˚C goal. There was civil unrest, mass drought, mass diseases, and exhausted resources.”

But repeating claims on the world stage that a 1.5˚C rise in temperature would lead to widespread anarchy is dangerous scaremongering.

If these alarmists spent a moment examining an unadulterated record of the Earth’s temperature history – such as that shown in the graph below – they would see that a temperature variation of 1.5˚C is quite normal and occurs naturally. Carbon dioxide levels vary considerably as well. In fact, it is quite ridiculous to even suggest that humans can do anything to alter such natural variations. But then again, the man-made climate change phenomenon is not based on science – if it were the likes of Greta Thunberg would not be considered global celebrities. 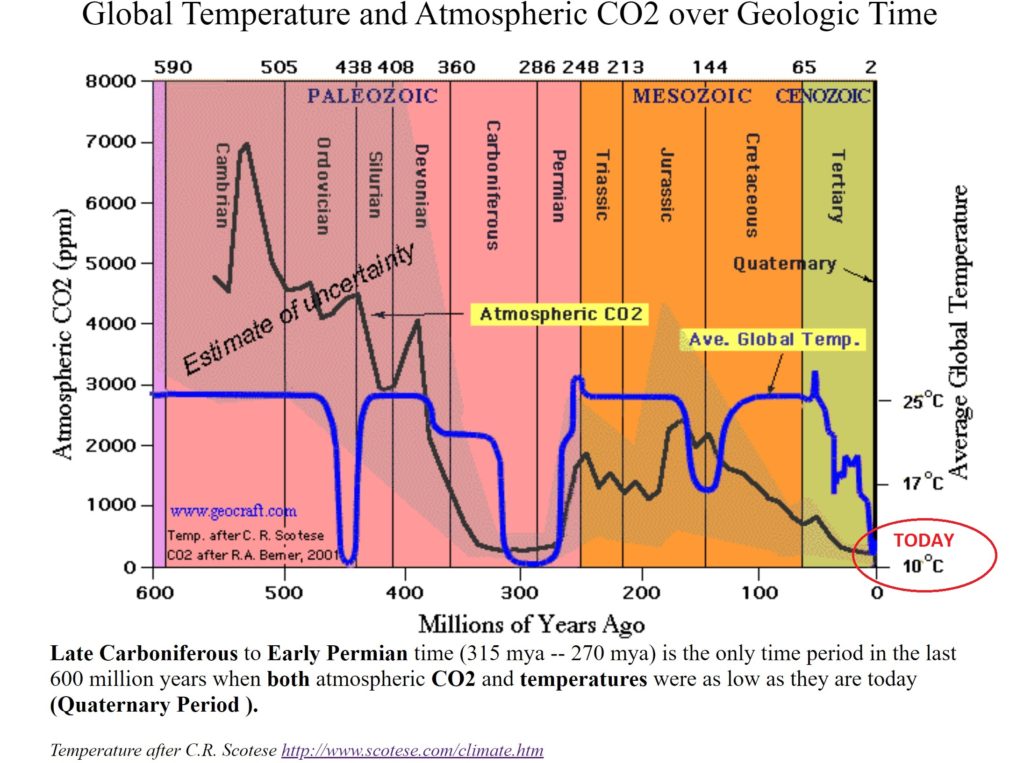 Science, of course, depends on testing the robustness of theories that are said to explain reality – to deny that right by saying the science is settled or that there is a ‘consensus’ is to deny science itself.

If climate change was based on science, critics and the media would not be closing down the debate, nor ostracising scientists who challenge the mob view – like Irish scientists Drs Ronan and Michael Connolly. They have been blacklisted because their findings, which are based on analysing 20 million weather balloon temperature records from all around the world going back to the 1950s, show that the earth’s atmosphere is in thermodynamic equilibrium, consistent with Einstein’s laws, thus invalidating the key assumption used by the UN that carbon dioxide drives climate change.

The Connolly research adds to a mountain of scientific evidence that proves the climate models used by the UN are wrong, since they essentially ignore the influence of the sun, cosmic rays, ocean currents, water vapour, clouds, volcanoes, and a multitude of other natural factors, to largely focus on man-made global warming emissions instead.

As Mark Twain once famously quipped, “There are three kinds of lies: lies, damned lies, and statistics” – the UN’s climate models, which are based on mathematical statistics not science, demonstrate the truth in that.

In fact, most of the apocalyptic predictions of media, politicians and activists, that mankind’s emissions of carbon dioxide are killing the planet, are based on those UN models. By cherry picking the data, they are able to produce catastrophic-like claims, designed to bully the public into accepting their narrative.

An example from Exposing Junk Climate Science can be seen below – the left hand graph shows that heat waves in the US since the 1960s have been increasing in line with claims of a warming planet. But if that graph is overlaid with the full data set, it can be seen that heat waves used to be much worse in the 1930s. A full exposé of this technique, that is commonly used by climate scientists and the media, can be seen HERE. 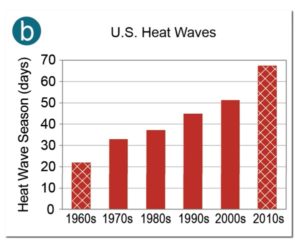 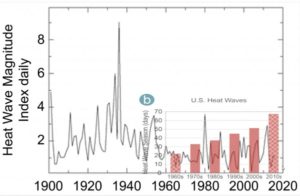 Back in 2003, when the late Dr Michael Crichton, an acclaimed film director and best-selling author, was asked what he considered to be the most important challenge facing mankind, he responded, “The greatest challenge facing mankind is the challenge of distinguishing reality from fantasy, truth from propaganda. Perceiving the truth has always been a challenge to mankind, but in the information age (or as I think of it, the disinformation age) it takes on a special urgency and importance. We must daily decide whether the threats we face are real, whether the solutions we are offered will do any good, whether the problems we’re told exist are in fact real problems, or non-problems.”

He was extremely concerned that environmentalism had been turned into a cult-like religion and fervently wanted its scientific base restored.

“On a day like today, when there are protests and demonstrations in country after country against governments’ alleged failure to tackle ‘climate change’, you feel as if you have stepped into a looking-glass world in which people have collectively taken leave of their senses.

“If, that is, you are someone like me for whom the whole climate change hypothesis is a mad, nightmarish cult in which an infantile (literally) view of the world, peddling ludicrous theories of imminent apocalypse which owe more to medieval millenarian sects than modern science, is being treated as unchallengeable wisdom by a lazy and credulous adult world that has stopped asking rational questions…

Scientific analysis shows changes in our climate are not outside the bounds of normal climate variability. Mankind is not causing accelerated warming, sea levels are not rising abnormally, the number of storms and wildfires is not unprecedented – common sense would also suggest that to be the case, since 98 percent of the planet’s carbon output occurs naturally and only 2 percent comes from human activity.

But, whether or not one believes humans are having a significant impact on the climate, surely we can all agree that science is never settled, and that everyone has a right to speak their mind. Without that, surely we risk descending into a dark age of mob rule.

Our present difficulty is that not many people will ever know about the Connolly research, nor of other great scientists, whose work is helping us to better understand our climate, because contrary opinion – even when it is based on science – is not the sort of thing the establishment publishes anymore. The followers of these works will be those that have in effect formed an underground resistance movement. These are the people that would rather listen to scientific debate than a 16 year old child admonishing the citizens of the world for ‘denying her generation a future’.

Is the Government’s zero carbon policy aimed at saving the planet, or is the goal to undermine economic freedom and expand government control?