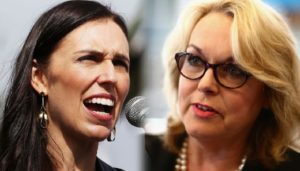 Sixty-seven  days out from the 2020 election, the National Party selected a new leader.

The resignation of Todd Muller after only 53 days in the top job was a surprise. Judith Collins is National’s new leader, with the capable Gerry Brownlee her Deputy:

“I feel privileged to have been chosen to lead the National Party at this important time in our history. My focus as leader will be helping rebuild our communities and dealing with the economic and jobs crisis by getting Kiwis back to work. Only National has the experience and skills to get us through this. We are a strong team and I look forwarding to forming the next Government.”

Born on a farm in Hamilton and one of six children, Judith Collins first supported Labour, before switching to National. Trained as a lawyer, in 2002 she was elected as the National MP for Papakura.

When National became Government in 2008, she became the Minister of Police and passed a law that enabled police to crush the vehicles of boy racers as a third strike measure. This earned her the reputation of being tough on crime, and the nickname “Crusher Collins”.

National’s new leader believes that the way out of the economic crisis created by Labour’s excessively harsh lockdown and unprecedented borrowing and spending, is to reduce government waste and encourage economic growth. Should she became Prime Minister, she has given an assurance that no form of wealth tax or asset tax would be introduced, and there would be no increase in income tax rates.

National’s leadership change is not too different from Labour’s experience in 2017, when they changed leaders just seven weeks out from the election.

Following a particularly brutal poll which put the Party on 23 percent, then leader Andrew Little resigned and his deputy, Jacinda Ardern, took over. Just 12 weeks later, thanks to ‘Kingmaker’ Winston Peters, she was sworn in as New Zealand’s 40th Prime Minister, with New Zealand First as a coalition partner, and the Green Party offering confidence and supply.

This time around, with polls indicating New Zealand First is well under the 5 percent threshold to re-enter Parliament, the country has been on track for a Labour-Green Government. That’s deeply concerning given the reckless economic policies being promoted by the Greens.

Their Poverty Action Plan, which has been called a bottom line policy, represents a serious attack on those New Zealanders who have done well for themselves. Under the Greens’ plan, they would be heavily taxed in order to make welfare benefits significantly more generous – a move that would dramatically deepen New Zealand’s dependency trap.

Since Jacinda Ardern hasn’t ruled the policy out, there’s no indication that Labour wouldn’t adopt it if the alternative was three years in opposition.

So, what exactly are the Greens proposing?

They claim their policy is all about “fairness” – but that’s a vacuous argument to justify the opposite. There’s nothing inherently fair about forcing a tiny minority of New Zealanders to fund a significant expansion of the welfare state.

Already almost a half of all income tax in New Zealand is paid by just 12 percent of taxpayers. Yet, under the banner of ‘fairness’, the Greens want to use the power of the State to grab more.

The Green Party plans to introduce a wealth tax that would include the family home, with just a few exemptions including Maori land, charitable holdings, and some household assets.

Those New Zealanders with more than a million dollars in net assets – including in family trusts – would be required to pay 1 percent of that value in tax each year, and over $2 million, 2 percent.

A wealth tax is far more punitive than a capital gains tax, since rather than being raised on profits after an asset is sold, it must be found each year by people who may be asset rich but cash poor. It would become an unaffordable burden on many New Zealanders, especially those who are retired.

The Greens expect their tax to raise 2.5 percent of GDP in its first year, making it one of the most punitive wealth taxes in the world, since European countries with similar taxes raise only about one tenth of that amount.

Furthermore, wealth taxes were considered by Sir Michael Cullen’s Tax Working Group’s comprehensive review of New Zealand’s tax system, and ruled out: “New Zealand historically had wealth taxes – in the form of a land tax, an estate duty, and gift duties. All of these taxes have since been repealed. There has also been an international trend toward the declining use of net wealth taxes. Wealth taxes are usually applied in addition to an income tax on capital income, in which case they do not reduce any existing distortions caused by the income tax, but rather generate an additional set of distortions… A wealth tax, however, is a complex form of taxation that is likely to reduce the integrity of the tax system.”

Yet in spite of it being rejected by the Cullen review – and every tax review before that – the Green Party wants to introduce a wealth tax and expects it to raise $8 billion in the first full year.

The Greens also plan to introduce two new higher income tax rates – the first at 37 percent for those earning over $100,000 and the second at 42 percent for incomes above $150,000. They expect to generate $1.3 billion a year from these tax increases.

The higher income taxes and the wealth tax would be used to fund a guaranteed minimum income (GMI) of at least $325 a week for anyone not in full-time employment. This would include the unemployed, students, and anyone working part-time.

The GMI, which would replace other income support payments and student allowances, would rise in line with the average wage.

Under the new scheme an unemployed person would receive at least $100 more a week than they currently get on the dole. Not only that, but there would be no stand-down period if someone quits their job to go onto welfare, and no sanctions for not taking a job, not turning up for an interview, refusing to take a drug test, or failing to comply with welfare department requirements.

Single parents would receive a minimum of $110 on top of their $325 basic income, and for each child under the age of three, an additional $100 a week payment in lieu of the $60 income-tested Best Start payment introduced by Labour.

Working for Families tax credits would be replaced with a Family Support Credit of $190 a week for the first child and $120 a week for subsequent children.

Relationship rules would also be relaxed so beneficiaries – and their partners – could earn more from working without losing their benefits.

The Greens would also change ACC – from an accidental injury compensation scheme to an “Agency for Comprehensive Care” that would cover all health-related income support with payments of up to 80 percent of a sick worker’s salary or 80 percent of the minimum wage – whichever is higher.

So, would the Green Party’s policy reduce poverty – as they are claiming?

Under their scheme, a solo mum with a couple of school age children would receive a minimum of $745 a week in the hand. In comparison, someone working in a minimum wage job earning $18.90 an hour would receive $642 a week (after deductions).

The problem is that the closer welfare payments are to wages, the less likely beneficiaries are to want to take a job, and the greater the dependency trap that’s created – especially if welfare sanctions have been removed.

As a result, the Green Party’s policy would substantially increase benefit dependence, and as a result, not only would entrenched poverty escalate – but so to would the danger to children.

This week’s NZCPR Guest Commentator welfare expert Lindsay Mitchell reminds us of the risk to children from benefit dependency:

“The links between welfare dependence from birth and poor, if not disastrous outcomes, have now been well-explored by institutions like AUT and Treasury. The latter identified 4 indicators:

1)    a finding of abuse or neglect;
2)    spending most of their lifetime supported by benefits;
3)    having a parent who’d received a community or custodial sentence; and
4)    a mother with no formal qualifications

“Using retrospective data they were able to predict outcomes:

“72% of the children with all four indicators were Maori. These heightened risks lie at the heart of the country’s ongoing inter-generational failure.”

As Lindsay points out, Maori disparity is caused by the family, not institutional racism.

During this present period of economic turmoil, New Zealand desperately needs the welfare system to not only support those who have lost their jobs, but to ensure they get back into the workforce.

The fact that the Green Party’s policy would do the opposite, reveals the extent of their delusion and the destructive impact their policies would have on work and the economy.

Unfortunately, the political reality is that Labour is likely to need the Greens to stay in power and it is naïve to think that Jacinda Ardern would sacrifice the Treasury benches on a matter of principle.

Right now, with New Zealand’s borders closed to immigrant workers, some of our key rural industries are facing a labour shortage crisis. That means the country needs our welfare system to step up and proactively assist the unemployed to take up jobs in those sectors where workers are so desperately needed.

Fruit and vegetable growers are warning that crops will rot on the ground unless thousands of pickers and packers can be found to harvest their produce.

Farmers are also struggling to attract the workers they need in spite of most being provided with accommodation, as well as decent wages.

We have also just learnt that the country now relies on immigrant shearers! In spite of good workers earning $90,000 a year within three years of training, and experienced hands able to make $150,000, not enough Kiwis are interested.

This clearly needs to change.

Looking forward, strengthening the welfare system to ensure the unemployed take on available jobs must be a Government priority – as must be growing the economy.

History on this is clear – the best way to grow an economy is for the Government to get out of the way so businesses can create jobs and wealth. New Zealand must harness the energy, expertise, and entrepreneurial talent of Kiwis wanting to build a good future for themselves and their families.

What the country needs right now are political leaders who understand this.

*Who do you believe will be the next New Zealand Prime Minister – Jacinda Ardern or Judith Collins?