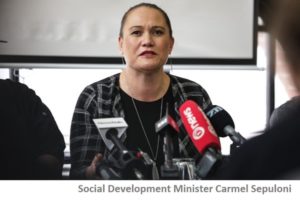 The Labour Government’s $2 million Welfare Expert Advisory Group’s report was made public last Friday – in the same week that Statistics New Zealand labour market figures showed the number of New Zealanders with jobs had fallen by 4,000 in the past three months.

It is thought that the Government’s industrial relations changes were part of the reason for the drop in jobs being created, along with increases to the minimum wage.

The Advisory Group’s report was delivered to the Government in late February, where it sat for nine weeks while Ministers considered their options. In the end, out of 42 recommendations with an estimated cost of over $5 billion a year, Social Development Minister Carmel Sepuloni announced that only three had been accepted – at a cost of $286.8 million over the next 4 years.

The first of the changes will see the introduction of 263 additional frontline staff to help more unemployed people find jobs.

The second will increase the amount that beneficiaries can earn before their benefit begins to reduce – in line with changes to the minimum wage. For job seekers, the threshold will increase from $80 to $150 a week, and for sole parents and those on supported living benefits, from $150 to $250 a week. These changes, which will come into effect on 1 April 2020, will, however, reduce the incentive for able bodied beneficiaries to leave the welfare system.

The third change involves abolishing the controversial section 192 penalty – formerly known as section 70A – that reduces the income of sole parents who refuse to name the father of their child. As a result, those women will receive an average of $34 a week extra from 1 April 2020.

This sanction was introduced by Labour in 1990 to ensure that fathers contributed to the cost of bringing up their children when mothers were receiving taxpayer funded benefits. A rort had developed whereby mothers received cash in return for not naming the father on the birth certificate, so he could avoid paying Child Support.

Under Helen Clark’s Labour Government the penalty was increased, while under Jacinda Ardern’s it will be abolished.

Comprehensive welfare reform was a major platform for Labour and the Greens ahead of the 2017 election. In calling for an overhaul – including the repeal of all benefit sanctions – the former Green Party co-leader Metiria Turei admitted benefit fraud and was forced to resign.

The Green Party continued on with her call for radical change, writing it into their Confidence and Supply Agreement with Labour: “Overhaul the welfare system, ensure access to entitlements, remove excessive sanctions and review Working For Families so that everyone has a standard of living and income that enables them to live in dignity and participate in their communities, and lifts children and their families out of poverty.”

Indeed, the 42 recommendations of the Advisory Group deliver most of what the Greens had called for. And while Labour has only adopted three of the recommendations at this stage – in a response that can only be described as ‘tinkering’ rather than the ‘transformational’ approach they promised supporters before the election – they haven’t ruled the others out.

“The Welfare Expert Advisory Group has delivered what the Green-driven government wanted – a recommendation to wildly increase wealth redistribution – an ideological affirmation. The group advises, ‘The fiscal cost of improving the adequacy and design of income support is estimated to be around $5.2 billion a year.’ That’s an increase of around 50 percent on current costs.

“Many of its recommendations are pie in the sky. It wants core benefit levels raised by up to 47 percent. On top of higher abatement rates, paid work for the unskilled would become uneconomical. People respond to economic incentives. For sole parents benefit ‘packages’ already rival income from employment despite the report’s claims about grossly inadequate levels of welfare.”

The problem is, as Lindsay notes, when the State gives out money unconditionally, far too many beneficiaries become locked into a dependency trap from which they are unable to escape. That’s why welfare dependency has been identified as a very serious risk factor for able-bodied beneficiaries and their children. It’s also why, welfare support was traditionally set at lower rates – to provide a temporary helping hand while someone found their feet and moved back into employment. Welfare was never intended to provide long-term support for people who are capable of working.

Many of the recommendations proposed by the Welfare Expert Advisory Group’s would, in effect, undo the reforms that had been introduced by National to eliminate the dependency trap and reduce the harm caused by welfare. They had taken an actuarial approach to identify the true cost of welfare dependency to the country and to ascertain the priority areas for reform. They found that the average total life-time cost for those receiving welfare in the year to June 30, 2011, was a staggering $78 billion, with two thirds coming from those who had first received a benefit under the age of 20.

They estimated the average life-time cost for someone on the Unemployment Benefit was $59,000, the Sickness Benefit $96,000, the Domestic Purposes Benefit $123,000, and the Invalid’s Benefit $136,000. Young women with children were found to stay on welfare for an average of 20 years.

With teenagers entering the benefit system potentially costing the country up to a quarter of a million dollars, more effort was clearly required to not only prevent young people from needing welfare in the first place, but to better support those already in the system to become independent of the State.

As a result, supervising adults were assigned to work with teenage parents. ‘Income management’ was introduced, whereby rent and necessities were paid directly from the benefit, grocery money was through a payment card that excluded non essentials like cigarettes and alcohol, and just $50 was available for discretionary spending.

Largely as a result of these measures almost half of all teenage beneficiaries left welfare and the rate of teen pregnancy plunged.

But in spite of its track record of success, Labour’s Expert Advisory Group has recommended scrapping the income management scheme for young people.

The Advisory Group also wants to abolish many of the other key changes that National introduced to significantly reduce dependency on the State – such as the need to re-apply for a benefit annually, which has resulted in the cancellation of thousands of benefits by recipients who are working in the cash economy or using multiple identities.

The Advisory Group has recommended that both of these sanctions should be abolished.

When it comes to raising children, the research is unequivocal – there is an increased risk of social dysfunction for children raised by sole parents on welfare. Child abuse, substance abuse, domestic violence, educational failure, crime, suicidal behaviour, are all much higher in single parent beneficiary families than two parent or working households.

This led National to introduce a range of social obligations for sole parents on welfare, to ensure their children are enrolled with a GP, that their Well Child health checks are up to date, that three and four year olds are involved in early childhood education, and that five and six year olds attend school.

With early childhood education available from age three, the work requirements for sole parents obliges them to look for part-time jobs when their youngest child turns three, and full-time when they turn 14. And if they have another child, work testing is suspended until the baby is a year old. When it resumes, the requirements are determined by the age of their next youngest child.

The Advisory Group wants to abolish both the social obligations and the early work requirements for sole parents.

If Labour decided to enact the Advisory Group’s recommendations for more generous sole parent benefits and the removal of sanctions, the steady trend of sole parents moving into employment – that has been underway since National’s reforms were introduced – would be reversed. This would increase the dependency trap and guarantee poorer outcomes for mothers and children.

The Welfare Expert Advisory Group’s chairman is Professor Cindy Kiro, a Maori Pro Vice-Chancellor at Auckland University and former Children’s Commissioner under Helen Clark’s Labour Government, who should be only too well aware of the risks to children from intergenerational benefit dependency.

By taking an elitist approach and including race-based terms in their recommendations, the expert panel will have been aware that they would be alienating the vast majority of New Zealanders from properly understanding what their proposed welfare changes entail.

Furthermore, they appear to be attempting to cement into the Social Security Act Maori supremacist ideology by recommending legal amendments that would make the Chief Executive of the Ministry of Social Development accountable to iwi.

But not all partners in the Government are supportive of a ‘soft on welfare’ approach.

In 2017, New Zealand First’s Regional Economic Development Minister Shane Jones announced a ‘Working for your Country’ scheme to get unemployed youth ‘off the couch and into employment’: “The country doesn’t want people sitting on the couch and not working when there are huge numbers of work opportunities available. There’s scores of young hoods in gangs, God knows how they still get a benefit, and they’re a menace. I’m not having it. They may not want the obligations of living in our country but they’re about to learn when you work for our country life gets a whole lot better.”

He outlined how Maori leaders in the Bay of Plenty were at their “wit’s end” about what to do with the dozens of young men they send to work in the forestry sector who then “refuse to accept the terms or aren’t willing to change lifestyle attitudes”, such as drug testing.

Shane Jones said, “If you’re in receipt of a benefit and not willing to change your lifestyle and get into work, then expect sanctions to be put on you.”

While the Minister’s proposals clearly met with opposition and were never enacted, they do illustrate the gulf that exists between New Zealand First’s approach to welfare and that of the Greens.

The Welfare Expert Advisory Group would be well aware that while their recommendation to significantly raise benefit levels would increase long term dependency on the State, it would also generate strong support from recipients for the Government. Perhaps that’s what they wanted to deliver to Labour and the Greens – and perhaps that’s what Labour will plan to enact before the next election.

But putting political considerations to one side, Government Ministers also need to weigh up the cost to children – reliance on welfare harms children and the longer the period of dependency, the greater the harm.

The reality is that welfare systems need to be continually reformed, but not in the manner proposed by the Advisory Group. Their report has, however, created an opportunity for National to propose its own welfare reforms – as a decisive point of difference.

The underlying philosophy of welfare should be to provide support in times of need and to transition people from welfare to work. In that respect the Expert Advisory Group’s report is a total failure and an indictment on its authors.

Do you support Labour’s decision to abolish the penalty for mothers who refuse to name the fathers of their children?