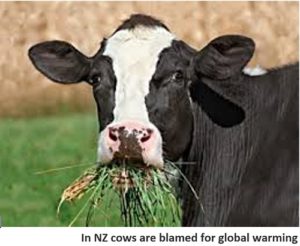 Back in May 2006, a communication strategy paper set out suggestions for how Helen Clark’s Labour Government, which had struggled to win a third term in 2005, could win the 2008 election. It said, “Labour needs a new approach and a new way of speaking to the NZ public… a fresh approach showing leadership to the rest of the world – that this little country at the end of the world can be a role model”.

The paper is thought to have been the catalyst for Helen Clark’s leap onto the environmental bandwagon with a pitch for New Zealand to become a world leader in ‘sustainability’. In her 20-minute Prime Ministerial statement to Parliament at the beginning of 2007, the terms ‘sustain’, ‘sustainable’ and ‘sustainability’ were used 42 times:

“My annual statement to Parliament this year is a call to action on sustainability. I believe New Zealand can aim to be the first nation to be truly sustainable… I believe that in the years to come, the pride we take in our quest for sustainability and carbon neutrality will define our nation…

“Two decades ago it was the threat of nuclear war destroying the world as we knew it which galvanised New Zealand to become nuclear free and to work for a more peaceful world… And so it must be with this century’s environmental sustainability challenge. We have to make a stand – for our world, and for our own sake… The future economic costs of doing nothing are dire.”

Helen Clark’s game plan was to make New Zealand carbon neutral and a global leader in sustainability by introducing the world’s first Emissions Trading Scheme to cover all gases and all sectors, by increasing renewable electricity generation to ninety percent by 2025, and by leading the world in electric car ownership to halve transport emissions by 2040.

Public concerns over an ETS focussed on the fact that including agriculture in the scheme, would not only drive up food prices and the cost of living, but would reduce the global competitiveness of the country’s primary export sector leading to lower returns, fewer jobs and declining economic growth.

The controversy spilled over into election year. Labour lost the 2008 election.

Fast-forward to the present, and Jacinda Ardern appears to have picked up where Helen Clark left off – even to the point of embracing the ‘nuclear free’ issue as her own.

Like Helen Clark, our Prime Minister is using global warming to create a political platform on the international stage – and perhaps a career path to the United Nations.

Her game plan – to lead the world through zero carbon legislation – will come at a significant economic cost to New Zealand. Since most of our man-made greenhouse gas emissions are in the form of methane from livestock and the food producing agricultural sector – along with carbon dioxide from motor vehicles, the financial burden will fall disproportionately on farmers and poorer families.

This creates a dilemma for the PM. As a climate change warrior, Jacinda Ardern will want to increase ETS carbon taxes on fuel – to make electric vehicles viable. But as a populist defender of the poor, she knows high ETS carbon taxes will flow through and increase the cost of living.

The present rise in petrol prices and living costs is providing a taste of what’s to come.

When Jacinda Ardern realised the anger over rising petrol prices was being directed at the Government, she blamed petrol companies for price gouging. When it was pointed out that Government taxes are a main contributor, she again attempted to seize the high ground by saying, “I can give this guarantee to consumers, there will be no other regional fuel taxes while I am Prime Minister.” Her commitment, of course, flies in the face of her own legislation, which specifically enables other regions to seek approval for an Auckland-style regional fuel tax from 2021.

The duplicity of the Prime Minister’s attempts to win favour with motorists by attacking petrol companies on the one hand, while leading the Government’s zero carbon agenda on the other, was not lost on Newshub reporter Ryan Bridge, who said Jacinda Ardern’s hypocrisy on climate change and petrol prices “knows no bounds”.

He described how the Prime Minister is trying to have it both ways. She says she’s “on the warpath” against the oil industry to stop price hikes, ordering an inquiry, and claiming that petrol companies that are “fleecing” motorists and “profiteering” will be compelled to open their books. But at the same time, she’s described climate change as her generation’s “nuclear-free moment”, stopped all new fossil fuel exploration, and called on other world leaders to do more.

Ryan says, “The hypocrisy here knows no bounds. Shouldn’t you be happy, Prime Minister, that people are getting out of their cars? Isn’t that what you wanted? See, it’s very easy to attack Big Oil and stop them exploring for it, an easier target than to attack motorists – aka voters – because they keep you in a job. This nuclear-free thing is virtue signaling at its very worst, from a Government whose so-called moral crusade against climate change is running on nothing but hot air.”

A number of other factors, besides Government taxes, are of course contributing to rising pump prices. These include the low New Zealand dollar and high oil prices caused by the global demand of around 99 million barrels per day outstripping supply by some 500,000 barrels per day. This is largely the result of the US renewing sanctions on oil exports from Iran, the collapse of Venezuela’s oil output, and the bottlenecks that have developed in the production of US shale oil.

In response to the shortage, the OPEC group of major oil producers led by Saudi Arabia has agreed to increase production from 33 million barrels per day. However, spare global oil production capacity is at a 30-year low, and with oil fields declining by an average of 5 to 7 percent a year, without new exploration to cover the depletion rate, oil prices are set to rise dramatically in the future. For shale oil, the ‘depletion’ rate is 30 to 35 percent a year.

For countries like New Zealand that rely on oil imports, the problem is that new investment in oil and gas projects has been collapsing around the world over recent years. With new oil reserve discoveries at a record low and growing uncertainties about future global supplies, Jacinda Ardern’s unilateral decision to close down our oil and gas industry looks increasingly irresponsible.

Whether public unrest over petrol price rises will force the coalition to take a reality check over their zero carbon agenda remains to be seen. But it certainly appears that anger at the economic sacrifice that New Zealanders will be forced to endure, will be directed at the Government.

By pushing her zero carbon agenda, Jacinda Ardern’s promise to relieve poverty and improve the lives of struggling families and children will also be put to the test.

As soon as Labour brings agriculture into the ETS, the retail cost of food will increase in earnest.

Given that it will be Labour’s policies that are to blame, the coalition will no doubt try to deflect responsibility. In light of Jacinda Ardern’s attack on petrol companies in response to the fuel price rise, we shouldn’t rule out similar attacks on supermarkets with allegations that they too are fleecing customers and profiteering from the poor and needy.

It’s bad enough when the leader of a country that produces only 0.17 percent of the world’s greenhouse gas emissions plans to do more to look good on the world stage, by introducing austerity measures that will significantly reduce economic growth and living standards. But it’s even worse when the data on which it’s all based is faulty, with the actual contribution that New Zealand makes to so-called global warming almost too small to measure.

This week’s NZCPR Guest Commentator, Dr Jock Allison, a former Director of Research for the Ministry of Agriculture and Forestry, outlines how the global warming potential of the gases that underpin the zero carbon agenda have been wrongly calculated.

When setting climate change policy, our Government relies on data from the United Nation’s Intergovernmental Panel on Climate Change, which uses complex mathematical models that have not been validated and contain significant errors and omissions.

For instance, when considering greenhouse gases in the atmosphere, water vapour dominates, making up around 95 percent, compared to carbon dioxide at 4 percent and methane at a miniscule 0.4 percent. Yet the IPCC models ignore the major influence of water vapour to focus on carbon dioxide and methane. This is in spite of around 90 percent of the planet’s greenhouse gas effect being attributed to water vapour, which absorbs the sun’s energy and, through convection, rises to form clouds high up in the atmosphere. These clouds not only trap heat, but they also limit the ability of methane and carbon dioxide to absorb radiation.

Dr Allison explains that new scientific evidence shows that the warming potential of man-made greenhouse gases has been “vastly overstated by the IPCC”:

“Much has been written recently about the misrepresentation of the effectiveness of methane as a Greenhouse Gas. Our paper published in September in The Journal (the official publication of the New Zealand Institute of Primary Industry Management), concludes that methane, as a ‘short lived’ gas, is irrelevant as a Greenhouse Gas. Not only is methane having very little effect on warming, but the financial burden of allowing for a massive warming effect based on defective science can’t be justified.

“Increasing the concentration of CO2 in the atmosphere is not such a potential warming problem for the world as frequently promoted in the scientific literature, by governments and the media. Clearly water vapour is the dominant Greenhouse Gas. CO2 becomes less and less effective – at a logarithmic rate – as its atmospheric concentration increases. Thus, there is limited opportunity for additional CO2 to cause heating.”

In other words, doubling or even trebling the amount of carbon dioxide we put into the atmosphere would not appreciably change the warming effects of the current levels of CO2, since the ability of CO2 to trap heat declines logarithmically. That’s the reason carbon dioxide levels have been so much higher during past geological eras, without causing the planet to fry.

So there we have it. Unless wisdom and common sense prevails, junk science will be used to force New Zealand into economic decline. Why? So our Prime Minister can look good on the world stage. In the process, she will attempt to ride two horses at once, decrying the pain and suffering low income families will face through her zero carbon austerity measures on the one hand, while promoting her “nuclear free” moment internationally, on the other.

Whether voters accept her propaganda remains to be seen.

Should agriculture be included in the Emissions Trading Scheme?