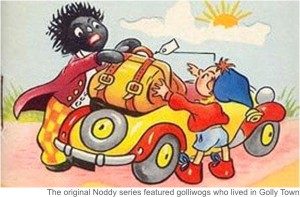 Earlier this month, a gift shop owner on Waiheke Island was called a racist, for selling golliwogs. The situation has been described as “Political correctness gone mad”.

The owner of the store, Kat, says that she explains to customers that golliwogs are an English thing: “They started off as talismans in England. They were based off chimney sweeps and chimney sweeps were actually white people.”

Kat believes there are “more important things for people to get offended about” than golliwogs, and says, “As far as I’m concerned society has just gotten far too PC”.

Golliwogs are well and truly victims of the PC brigade.

These dolls, which had become enormously popular by the mid-20th century – second only to teddy bears – were declared a symbol of racism by activists in the sixties.

The British jam manufacturer James Robertson & Sons, which had adopted the golliwog as a company mascot in 1910 along with a slogan, ‘Golly its Good’, was eventually forced to drop its use in 2001. Over time, the company issued some 20 million golliwog badges as part of its marketing strategy – badges that are now highly sought after by collectors of memorabilia.

Children’s author Enid Blyton wrote about gollywogs between 1949 and 1963 in her series of 24 Noddy books. The books were translated into 27 different languages, with more than 200 million copies sold. However, under pressure from militant campaigners, the publishers were forced to replace the golliwog characters in later editions of the books.

So while golliwogs were once regarded simply as much-loved and slightly mischievous dolls, they are now portrayed by activists as symbols of abuse that they say humiliate and intimidate black people.

That’s also the view being taken by the Human Rights Commission, which has become a key driver of political correctness in New Zealand. In response to the fracas over the golliwogs in the Waiheke store, a spokeswoman claimed that they are “racist caricatures that dehumanise black people”. She said that New Zealanders who think selling golliwogs is OK “need a wake-up call”.

In spite of what she says, the sale or public display of golliwogs in New Zealand is not against the law. While the Human Rights Act does outlaw ‘inciting racial disharmony’, the threshold is high and selling golliwogs – or golly dolls, as some are now calling them – does not breach the threshold.

The golliwog debacle serves to demonstrate just how politicised and sensitive society has become. Nowadays it appears that everyone feels they have to be extremely careful about what they say or do, lest they offend the sensitivities of others, and are victimised by activists promoting a cause.

To most people, the prospect of attracting unwanted attention from the media or sharp-tongued radicals is so intimidating that what should be a fundamental right to free speech is now severely compromised.

This was a point made by this week’s NZCPR Guest Commentator, Dr Don Brash in a speech to the Liberty Conference late last year. The former leader of the National Party said that in spite of free speech being protected in law, there is now a massive intolerance towards free expression in New Zealand:

“In New Zealand, freedom of speech is enshrined as one of our fundamental rights in the Bill of Rights Act of 1990.  Section 14 of that law, headed ‘Freedom of expression’, notes that ‘everyone has the right to freedom of expression, including the freedom to seek, receive, and impart information and opinions of any kind in any form’.

“But despite that, there are insidious pressures to discourage the expression of certain opinions…

“It is regarded as racist to suggest that all New Zealanders should have equal political rights, despite that being the clear meaning of Article III of the Treaty of Waitangi and the only basis for a peaceful society in the long-term.”

Dr Brash is right. There are now many issues that people will speak freely about with their family or close friends, but are now regarded as taboo with a wider audience.

It’s even got to the point where some people are afraid to sign their names and addresses on petition forms – if they deem them to be too controversial – just in case there are ‘repercussions’.

This is presently an issue for those living in areas where their local councils have voted unilaterally to create Maori wards. As the law now stands, such a decision can be challenged if 5 percent of residents and ratepayers sign a petition requesting that the matter be decided by the wider community through a binding public referendum.  This is to reflect the fact that in a free democracy, convention provides that major constitutional change – such as introducing Maori wards – should involve the wider community in the decision-making through a public referendum process.

It now appears that in some local government areas, where the pro-Maori ward lobby has become very aggressive, many who oppose Maori wards feel intimidated and are now too afraid to sign the petitions for a referendum for fear of reprisal.

Maori Wards, which sit alongside general wards and cover the whole district, are provided for in the Local Electoral Act 2001. They are similar to the Maori seats in Parliament in that only those on the Maori roll can vote for the representatives.

Maori wards can be established through one of three ways.

Firstly, a council may resolve to establish Maori wards unilaterally through a council vote. If they do so, a poll on the issue must be held if 5 percent of electors in the area sign a petition requesting it.

Secondly, a council may decide that whether or not there should be Maori wards is a matter for the community at large through a public referendum process.

And thirdly, a public referendum on whether or not Maori wards should be established can be held at any time, if requested by a petition signed by 5 percent of electors.

If a referendum is held, the results are binding on the council for at least two elections.

Every six years, councils are required to review their representation arrangements. This includes whether or not there should be Maori wards, what voting system should be used, whether ward boundaries need to be changed, and whether community boards should be established.

If councils wanted to introduce Maori wards in time for the 2019 Local Body elections, they had to have made their decision by the 23rd of November 2017.

Five councils – Palmerston North, Kaikoura, Manawatu, Whakatane, and the Western Bay of Plenty – decided to establish separate Maori wards through a council vote. Some had asked locals for submissions on the matter, but none had resolved to allow their community to make the decision through a public referendum.

The decision to introduce Maori wards in each of the areas is now being challenged, with petitions underway to collect signatures from 5 percent of local electors to force the councils to hold referenda on the issue.

The Auckland Council also voted in favour of Maori wards – with nine councillors plus the Mayor in favour and five opposed (six were absent) – but only if the Government changes the law so they don’t lose any existing seats. In other words, they want a Maori ward as long as none of the sitting members loses their seat!

When the super city was created in 2010, the government not only capped the number of councillors at 20, but it rejected Maori seats in favour of an Independent Maori Statutory Board to sit on committees and advise the council.

While the Auckland Council doesn’t need government approval if it makes one of its existing 20 wards a Maori ward, it does need a law change to lift the 20-seat cap, if an additional Maori seat is to be created.

If approval for more seats is given to the council, and a decision is made to establish Maori wards, it could, of course be contested. A petition signed by 5 percent of residents – around 51,000 – could demand a referendum on the issue, which is likely to cost the council around $1 million if it was held separately, or $150,000 if it was held in conjunction with the local body elections.

Unfortunately, there are some in our community who want to remove the public’s right of veto over the creation of Maori wards from the Electoral Act.

Leading this attack on local body democracy is the former Mayor of New Plymouth, Andrew Judd, who reacted badly when locals challenged his Council’s decision to establish Maori wards in 2014. When the referendum was held, an overwhelming 83 percent of New Plymouth locals rejected the Maori ward proposal.

But rather than accepting that local democracy is about letting people have their say, and respecting their views, he arrogantly called his constituents ‘racists’, stated that half of all local authority councillors should be Maori, and demanded a law change to remove the right of locals to hold a poll.

In effect, by removing the public’s right to call for a referendum, the petition was an attack on local government democracy that would result in Maori wards being introduced throughout the country.

The petition became the basis of the Local Electoral (Equitable Process for Establishing Maori Wards and Maori Constituencies) Amendment Bill – a Private Members Bill in the name of the Green Party MP Marama Davidson. The Bill was drawn from the ballot last year and a first reading debate was held in June. It was defeated by 71 votes to 48, with National, New Zealand First and ACT opposed, and Labour, the Greens, the Maori Party, and United Future in favour.

With Labour and the Greens now in Government, there remains an on-going concern that they might be planning another attempt to try to change the law, despite most New Zealanders not wanting to be defined by race – not even those of Maori descent.

The only people wanting to divide the country by race are a small but vocal minority of tribal activists and their supporters, who will stop at nothing less than Maori sovereignty at all levels of government. It is this racist agenda that we all need to stand against.

I will leave the final word to New Zealand First’s Ron Mark, the former Mayor of Carterton, who said, in the debate about Maori wards:

“There are those of us in Maoridom who subscribe to a view that we attain and achieve on merit. We either succeed or we do not on our own abilities… Carterton is a conservative rural district… yet Carterton elected Georgina Beyer, who was not only Maori but a transsexual as well…  I did not run on a banner that ‘I am Ngāti Kahungunu’ therefore, I have a right to have a reserved seat and to be the Mayor. I stood on the name of Ron Mark, and people judged me on my merits and elected me.”

Should the right of the public to challenge council decisions to establish Maori wards through a referendum process be retained or removed?