Grow a Spine or Resign 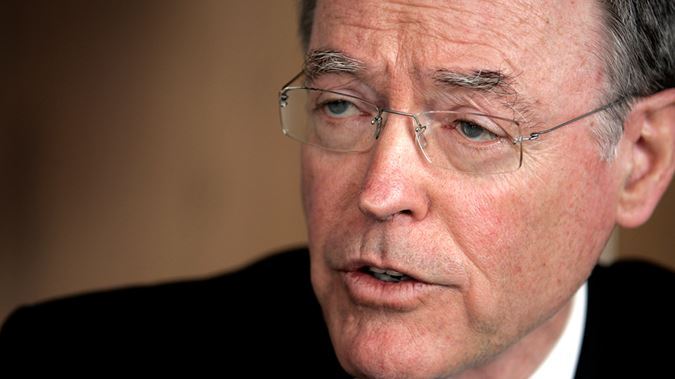 Don Brash has become something of a lightning rod for free speech in New Zealand. In 2004, as leader of the National Party, it was over the Treaty of Waitangi. Now it’s over the right to free speech itself.

From the outset we should thank Dr Brash for having the courage to stand up for his  beliefs. He appears fearless and resolute in the knowledge that he has as much right as anyone else to say what he thinks.

The recent uproar over the free speech debate was instigated by Auckland Mayor Phil Goff, who made some ill-considered remarks over the right of two visiting internet stars, Canadians Lauren Southern and Stefan Molyneux, to speak at Council-owned venues.

His actions led their opponents to threaten such disruption at a replacement venue that the owner cancelled the event at the last minute. In effect, the visitors were run out of town – denied the right to express their views. As a consequence, New Zealand is now heralded around the world as a country that suppresses free speech.

The whole issue was then escalated last week when the Vice Chancellor of  Massey University, Australian Jan Thomas – citing concerns over security – cancelled a scheduled talk to a politics class by Dr Don Brash who was there to discuss his career as the former leader of the National and ACT parties and as Governor of the Reserve Bank. But more on that shortly.

Two days later, free speech was again in the spotlight when Dr Brash participated in the Auckland University’s inaugural Think Big Debate, on the conveniently-timed topic of whether the PC culture is limiting the freedom of speech.

The Debating Society’s event attracted a huge audience and a predictable rabble of protesters who tried their utmost to disrupt the meeting and prevent Don from speaking. Refreshingly, the vast majority of the audience supported free speech and made their views known, forcing the demonstrators to retreat back to their seats.

Don Brash, who is this week’s NZCPR Guest Commentator, with the speech he gave at Auckland University, explains what happened:

“A number of protesters were absolutely determined that I would not be allowed to speak at all because they had convinced themselves that I was in some way anti-Maori and/or anti-Treaty.  How on earth did we get to the stage where a perfectly orthodox view, accepted across all English-speaking countries, that everyone should have equal civic rights and responsibilities, can be described as ‘hate speech’ and inconsistent with the Treaty?

“The protesters were able to prevent me from speaking for a few minutes, but in the end they simply proved that free speech is opposed by a noisy minority of the population. The overwhelming majority of New Zealanders strongly support free speech – and that must surely be a cause for optimism.”

The contrast between the approaches taken by the two universities – Massey and Auckland – could not have been greater.

Auckland University sought to debate contentious issues and theyresponded to threats of disruption by providing extra security. There was of course no violence, just noise. All of the speakers were eventually able to argue their case, and the audience had the opportunity to hear all views and could make up their own mind on whether political correctness is limiting free speech.

In holding the debate, Auckland University was fulfilling its ‘academic freedom’ obligations – under Section 161 of the Education Act, universities have a responsibility to ensure “the freedom of academic staff and students, within the law, to question and test received wisdom, to put forward new ideas and to state controversial or unpopular opinions”. In addition, they were also upholding their Section 162 requirement of being the “critic and conscience of society”.

In comparison, Massey’s Jan Thomas, turned her University into a laughing stock by denying a respectable New Zealander his right to free speech. What’s worse is that had the Vice Chancellor really believed that the so-called ‘threat to public safety’ – the reason she claimed Dr Brash had to be banned – was genuine, she would have discussed the matter with university security staff and the Police before issuing the sanction.

Karl Pearce, the man whose letter Jan Thomas claimed triggered her alarm and led her to ‘de-platform’ Dr Brash, believes he was misinterpreted. In his letter, he raised concerns about the potential for bad publicity for the University if the event was used to challenge race-based rights, given that Massey is a Treaty-led institution, and he wanted to know what steps were being taken “to ensure the safety of those attending”.

And while Palmerston North’s Te Kai Po Ahuriri posted a link to the event on Facebook saying, “This guy lol….if you’re up to nothing Wednesday head up to Massey uni PN”, it was Vorn​ Rossiter from the Bay of Plenty, who added a comment “take a gun”, which he claimed was in jest.

But instead of dealing with these evolving concerns, Jan Thomas cancelled the event. She did this in spite of asserting in an opinion piece in the Herald, just three weeks earlier, that “The right to speak freely is a bedrock principle of democratic society”, and that those who “stymie this freedom of expression” are “tyrants”.

In her article she also alleged that free speech is being used as a tool of colonisation and must be restricted, going on to call free speech that is used to challenge racial privilege, “hate speech”. She then explained that “the battle against hate speech is fought most effectively through education and courageous leadership, rather than through suppression or legal censure. And this is where universities can take positive action by providing a venue for reasoned discussion and cogent argument.”

So while the Vice Chancellor condemned the silencing of free speech in her article, saying that the most effective way of dealing with controversial views is through robust debate at universities, in real life, she did exactly the opposite – she suppressed free speech and cancelled events, becoming the tyrant she said she so despised.

Since free speech is guaranteed in our Bill of Rights, with Section 14 saying that “everyone has the right to freedom of expression, including the freedom to seek, receive and impart information and opinions of any kind and in any form”, the Vice Chancellor and those other gutless leaders who are caving in to threats from protesters and banning speakers, are, in effect, breaking the law. They should grow a spine, or resign!

In her press release cancelling the event, Jan Thomas indicated that Dr Brash’s support for a colour-blind political system was not only a concern to Maori staff, but was inconsistent with “the values of a Tiriti o Waitangi-led organisation.”

In fact, the University’s decision to embrace the Treaty of Waitangi and biculturalism – as expressed in their 2018-2022 strategy – appears to be at the heart of the Vice Chancellor’s decision to prevent a high profile critic of race-based privilege from speaking there.

It now appears that in spite of New Zealand’s long history of passionate and courageous outspokenness – from fighting for the right of women to vote ahead of the rest of the world, to opposing racial division in South Africa during the Springbok Tour – our proud record is now under threat, as the PC brigade systematically attempt to silence anyone with opposing views.

Their threats of protest at Lauren Southern and Stefan Molyneux’s speaking event, was enough to deny the Canadians the right to speak at council-owned venues.

The leader of New Zealand’s largest city and the country’s main tourist gateway, Mayor Phil Goff, as a former Member of Parliament, should understand better than anyone, not only the importance of free speech, but also the need to treat international visitors with respect. Yet he subjected the Canadians to unprecedented rudeness, when he said, “Auckland Council venues shouldn’t be used to stir up ethnic or religious tensions. Views that divide rather than unite are repugnant and I have made my views on this very clear. Lauren Southern and Stefan Molyneux will not be speaking at any Council venues.”

The Prime Minster Jacinda Ardern, whose duty should surely be to defend free speech in New Zealand, showed astounding immaturity when she said: “I think you’ll see from the reaction they’ve had from New Zealanders that their views are not those that are shared by this country, and I’m quite proud of that. I think [New Zealand] is hostile to their views… Look, they are here because there were no grounds to block them being here. That does not mean we welcome their views.”

In comparison, the Acting Prime Minister at the time, Winston Peters, acknowledged the importance of free speech and said he would have allowed the event to go ahead: “Had we been asked… we’d have allowed them to come on the basis of free speech. It’s one of the most fundamental freedoms that we have and we should be very careful who we expel on that cause, because the downstream historic record on that has been just disastrous. We live in an age when all sorts of trolls are out there challenging people’s right to have a different view from theirs. It’s not enhancing our society.”

So what were the contentious issues that the Canadians intended to raise, that were so “offensive” to a radical minority that they had to be closed down?

Lauren Southern discussed one such issue in a TVNZ interview when she reminded us that in the clash of cultures, the utopian idea that cultures can peacefully co-exist, is simply not true. That’s why, she says, biculturalism can never work, because one culture will invariably fight to dominate the other, in order to gain an ever-greater share of power and resources.

Lauren explained that anyone who tries to question biculturalism, will be called a racist in order to shut them down. But she urged New Zealanders not to back off, saying we should be asking, “Do we like what New Zealand culture has become?”, and – more importantly – “Do we want to go further down the track of biculturalism?”

She’s right – these are very important questions. But what is also becoming increasingly clear, is that those driving the bicultural agenda are extremely well organised and will go to almost any lengths to prevent their ambitions from being exposed.

That’s essentially one of the main reasons why the protesters at Auckland University’s Think Big Debate tried to stop equal rights advocate Don Brash from speaking; its why Jan Thomas banned him from the Massey University campus; and it’s also why the Canadians were silenced. Biculturalists do not want their agenda challenged at high profile events, in case the concerns take hold and spread. It really is as simple as that.

In other words, the separation of State and Culture in New Zealand would prevent the government from forcing Maori culture onto us all – including schools. This is surely a concept worthy of serious consideration.

Without a doubt, free speech is the cornerstone of democracy. Yet in this country, the right of individuals to freely participate in open debate and express their views frankly, without fear of recrimination, is increasingly under threat.

So thank you to all those New Zealanders who understand the value of free speech – and are fearless in its defence.

And shame on the loud-mouthed protesters who would rather bully others into silence than engage in reasoned debate. And shame on Auckland’s Mayor, Massey University’s Vice Chancellor, and the Prime Minister for failing to stand up for the right to free speech in New Zealand.

Would you support a call for the separation of the State and Culture in New Zealand?