Mike Hosking is one of the country's leading political broadcasters. He hosts the number one rated Breakfast Show on Newstalk ZB. 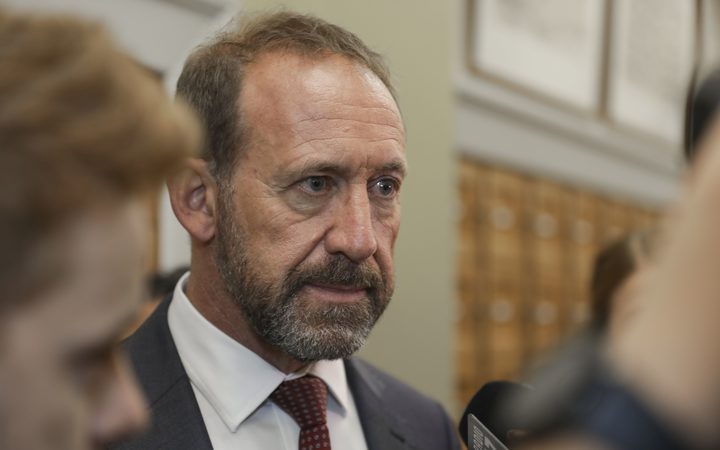 Looks like Andrew Little has already dug himself into a hole over his hare-brained scheme to monitor, and somehow regulate, our views and opinions next year when it comes to votes on weed, euthanasia and the government itself.

The first and obvious red flag was his desire to have his own ministry do the job. What’s the first rule of good oversight when it comes to government operations? Independence.

And just to drive that danger home, Little has now publicly expressed his doubts over the Advertising Standards Authority’s ability to do their job in this area.

Why does he have doubts? Because he took a case to them and lost. So is the authority not up to it? Or is he a sore loser?

In this small scrap is your classic problem with what Little is trying to do. You simply cannot escape the doubt that if you’re dealing with government-led votes on highly contentious things like drugs and death, to have that very government, whether it be through a ministry or not, oversee what is said and how it’s said and whether it is ruled acceptable or not is the work of the communists.

It’s the sort of system you’d expect in North Korea and China.

You can understand what’s driving it all. On Facebook you can say what you like: accurate or not, legal or not. But then that’s another problem for Little, what platforms are applicable in his overarching zealousness? Can he control Facebook or Twitter?

Another major problem is to be found in his criticism of the ASA. What he objected to is their guidance. The guidance, he says, is that if you believe something is true then it is.

Now I believe, based on a lot of reading and various examples, that if you de-regulate dope you’ll increase demand, you’ll also see the price drop and mental health issues increase.

But I fully accept that if you’re a ‘yes’ voter you’ll be able to find material that says something different. So who’s right? Who rules on that? And what criteria do they use to rule? Fact is one thing, opinion mixed with fact is another.

And every time a controversial decision is made in a debate like this (and let’s be honest every decision will be controversial) you’ll be accused of yet more controversy that a state department is gerrymandering a state-run vote and manipulating what is said, and by whom.

The biggest problem Little faces though right here right now, is that he doesn’t appear to be able to see this.

He is so obviously and glaringly compromised, you have to wonder if he should be in charge of any of this to start with.

And here’s Mike on legalising cannabis:

Three reasons why legalising cannabis is a dopey idea

More insight today into why the cannabis referendum and law reform, or to use a more accurate term “legalisation,” will be voted down.

Last time we talked about this, a poll came out with a very solid majority favouring rejection.

New detail for you today. One, another poll with two-thirds of the construction industry here worried about the effects. Why? Because it’s already hard enough to find workers, and stoned workers aren’t the sort you want up scaffolding.

Two, they are currently 60,000 truck drivers short in America. That’s just truck drivers. Miles aren’t being covered, business isn’t being done, and yards are closing. This in a booming economy. Why? Drugs, they can’t get candidates that pass a test.

Three, Colorado. A bloke called Sam Wong, a doctor who works at the children’s hospital has seen for himself the effects of making dope legal. He’s seen it locally, and had it confirmed in a nationwide study he conducted.

Remember when we talked to Chloe Swarbrick and she told us to look at Colorado, and we did. We interviewed a police force member who dealt with drugs. He said as clearly and as loudly as possible, don’t do it.

Sam Wong says the same. There has been a spike in kids and teenagers being treated for addiction. Babies finding caregivers’ edible cannabis products are ending up in hospital. There’s a 27 per cent increase in kids with troubles – 70 per cent of those cases come from states that have legalised dope.

THC (the active ingredient in cannabis) levels have gone from 3.7 per cent to 20 per cent. Once it’s legalised it’s easy to get the highest grade in the strongest form. The states have raised $3 billion in taxes so far.

So what have they achieved? Kids in hospital, increased addiction, higher use with stronger product – and the state governments have got rich.

So the law officers in Colorado are saying it’s madness, the medical fraternity are saying it’s madness. One assumes if you ask, and we will before the end of the year, the teachers and school administrators, and the employers, whether there is any good news to be found, I assume they will tell us the same thing.

Forewarned is forearmed. All the evidence is there, the red flags are up.

This is the country that in the latest Budget put aside $2 billion for mental health. We are seemingly riddled with social and mental trauma, and this Government seems keen to add to that. It is the definition of madness.