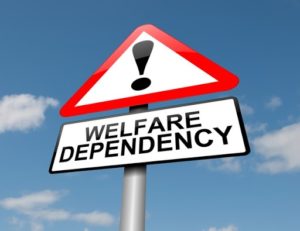 Dr Ron Haskins,a senior fellow at the Brookings Institute and former White House Presidential Advisor on welfare reform, has a long association with welfare policy research and development, including the most effective ways of reducing child poverty.

Through modelling and analysis, he has concluded, “Increasing work rates had by far the biggest impact in reducing poverty. In many similar analyses using different approaches and data from different years, all our modelling work showed that the most effective way to reduce poverty is to increase work rates.”

The rationale is not purely economic: “Work is more than just a means of income generation. Work also provides adults and their families with a time structure, a source of status and identity, a means of participating in a collective purpose, and opportunity for social engagement outside family life. A host of studies have connected joblessness to increased risk of family destabilization, suicide, alcohol abuse, and disease incidence, as well as reduced lifespan. Several large reviews of research conclude that unemployment not only reduces physical but also psychological well-being.”

Findings like this underpin successful welfare programmes around the world. The only effective way to reduce child poverty is to ensure parents are in work, not on welfare. Policies that make welfare attractive risk deepening the dependency trap.

Dependency traps are created when governments raise the value of welfare payments to levels that are so close to the returns from wages that there is little incentive for beneficiaries to find work – unless they are compelled to do so.

New Zealand used to have a relatively strong work testing requirement for able-bodied beneficiaries. It was part of the reason for the decline in welfare numbers after National overhauled the system in 2012.

The Ardern Government, however, removed the Ministry of Social Development’s emphasis on work, requiring them instead to focus on ensuring beneficiaries receive their full entitlements – as explained in their Annual Report: “The increase in demand for financial assistance this year has impacted on the time our case managers can spend with clients on proactive employment-focused case management: only 20 percent of engagements with clients in June 2019 had an employment focus, the lowest proportion since 2014.”

As a result, by the end of December 2019 benefit number had increased to 314,408 – 25,000 more than when Labour took office. With the country facing a serious shortage of workers over the last two years, there had never been a better time to place people into work. Logically, benefit numbers should have been decreasing not increasing, raising concerns that Labour’s soft-on-welfare policies are ensnaring a new generation in the dependency trap.

With long term benefit dependency identified as a key risk factor for children, the situation is increasingly dangerous: 206,395 children aged 18 years and under now live in benefit dependent homes –  an increase of 12,000 since Labour became the Government.

Children who spend 80 percent or more of their first two years on a benefit are 38 times more likely than those with no benefit history to be abused. Nearly three-quarters of all beneficiaries aged under 25 had a parent on a benefit while they were a child.

With babies born to mothers on welfare especially at risk, there are concerns that increasing the value of benefits creates an incentive for such women to have more children.

National’s Welfare Working Group, established in 2010 to identify ways to reduce long-term welfare dependency, had addressed this issue in their reform proposals. They outlined policies that were being used in other countries to prevent beneficiaries from having children to gain more money and avoid having to work – namely capping the benefit at the number of children a woman has when she enters the system: “Government should consider whether further financial disincentives are necessary, including that parents not qualify for any additional financial assistance through the welfare system for any additional children born whilst in receipt of welfare, other than access to emergency assistance.”

Unfortunately National did not adopt the recommendation.

Labour, on the other hand, has created an incentive for women on welfare to have more children through their Best Start ‘baby bonus’ payment of $60 a week for newborns, which continues until the child is three. The effect is obvious: while the number of babies born to beneficiary parents remained relatively stable at around 4,800 between 2006 and 2010, under Labour, the numbers have escalated to almost 6,200 in 2019.

Welfare researcher Lindsay Mitchell says this represents one in ten babies born last year – and one in five Maori babies. She explains, “Having more babies when unable to independently provide for existing children entrenches long-term dependency. Children on a benefit from birth are more likely to experience abuse and neglect, material hardship, poorer health and educational outcomes, and contact with the justice system.”

The fact that one in five Maori babies are being born into dependency is shameful. It is a social time bomb – a critical policy failure that must be addressed to ensure more babies are not harmed.

Almost every change Labour has made to welfare is deepening the dependency trap.

Their 2018 Budget introduced the $60 a week ‘Best Start’ baby payment, along with increases to a range of auxiliary grants including Family Tax Credits and the Accommodation Supplement.

Labour’s 2019 ‘Wellbeing Budget’ scrapped the sanction on sole parents who refuse to name the father of their child – a penalty that had been increased by Helen Clark’s Labour Government to encourage compliance with child support obligations.

MSD estimates that removing the weekly penalty of $28 a child will cost taxpayers more than $100 million over four years, warning the cost could be “considerably” higher if the change triggers an overall reduction in child support compliance.

The Government also announced that from 1 April 2020, main benefits will be indexed to average wage increases, instead of the Consumers Price Index. In this case, a 3.09 percent increase will lift sole parent benefits by $10.48 a week, rather than $5.64 under the CPI rate of 1.66 percent. By 2024, the additional cost is estimated to be in excess of $320 million – and rising.

While Jacinda Ardern boasts that hers is the first Government in New Zealand’s history to index benefits to wages, the former Labour Minister of Finance, Sir Michael Cullen, warned against such a move in 2008: “It is desirable to create a margin between being dependent on a benefit and being in employment… The Labour Party isn’t the party that says living on a benefit is a preferred lifestyle. Its position has always been that the benefit system is a safety net for those who are unavoidably unable to participate in employment. From its history, the Labour Party has always been about people in employment…”

By removing a significant differential between welfare and work, the Prime Minister is indeed turning Labour into the party that says living on a benefit is a preferred lifestyle. By her actions, she will condemn a new generation of vulnerable children into State dependency. This reality is the opposite of the caring image she likes to promote.

Labour’s changes mean that many sole parents with a couple of children on welfare could receive around $1,000 a week after tax. This includes their Sole Parent Support benefit of $339.69 after tax, family tax credits of $113.04 for a first child and $91.25 for subsequent children, the $60 a week baby bonus, the accommodation supplement of up to $305 a week, $10 a week from the new benefit indexation – along with a range of additional payments including around $50 in Temporary Additional Support and $100 in Emergency Housing Special Needs grants.

For a sole mother with little work experience and few qualifications, an income of $1,000 a week cements her into the dependency trap – in spite of it being a risk factor for her children.

But it’s not just benefit levels that are contributing to the dependency trap.

Radio NZ recently reported on a case involving the health system: “A year ago the 31-year-old father of four was working at the Otahuhu meatworks… About eight months ago he got an abscess and is now on a lengthy waitlist for surgery – he can’t work while he waits and has been stressed and struggling while on the Job Seekers Benefit. They are boarding and have been on the waitlist for a statehouse for around seven months.”

Diagnosed with what may be a relatively minor complaint, an eight month wait for surgery has led to the loss of work and reliance on welfare. It’s an indictment of the health system that people have to wait so long for operations. How many others have been pushed into dependency because reducing hospital waiting lists is no longer a priority for the Labour Government?

And what about housing? This family, with four young children, have been on the housing waiting list for seven months. In fact, since Labour became the government, the state house waiting list has exploded from 6,000 to almost 15,000.

The Government’s track record in housing is abysmal. KiwBuild had to be abandoned and their refusal to reform the Resource Management Act means that under their watch building houses in New Zealand remains amongst the most difficult and expensive in the world.

Their attack on landlords through expensive new regulations, have forced up rents by an estimated $50 a week. More draconian changes, that will push rents up further, are presently going through Parliament. Submissions on the Residential Tenancies Amendment Bill close on March 25 – details can be found HERE.

It’s not just welfare, health and housing that deepens the dependency trap – but education too.

A good education can, of course, provide a ladder out of dependency. Yet new data shows that regular attendance at the country’s primary schools is falling. Last year, only 58 percent of children attended school more than 90 percent of the time – a drop from 64 percent in 2018.

In Northland, a region with an entrenched dependency trap, the problem is even worse – only 48 percent of students regularly attend school, down from 51 percent in 2018.

How can children get a good education if their parents don’t bother sending them to school? How can such poor attendance be acceptable to any government?

As a new Prime Minister, Jacinda Ardern vowed to reduce child poverty. But with statistics showing any improvement is marginal, she is no doubt hoping that her launch of a free school lunch programme will divert attention away from the real issues and demonstrate her commitment.

A pilot programme is being rolled out to year 1-8 pupils in 30 schools, extending to 21,000 children in 120 schools by the beginning of 2021. Over $44 million in funding has been allocated to the project. The Ministry of Education estimates the meals will cost around $5 each.

This week’s NZCPR Guest Commentator, community worker and columnist Clive Bibby, is appalled at the new programme, describing it as “socialism by stealth”:

“What we have here is a slick manoeuvre by the current government to gain public approval for a community programme that will make them look good in election year and allow the unquestioned spending of huge amounts of dollars solving a problem that is at best exaggerated and for the most part unnecessary.

The answer to child poverty and the elimination of the dependency trap lies in assisting beneficiary parents to move from welfare into work. It lies in clearing hospital waiting lists so thousands of sick parents can get well and go back to work. It lies in requiring parents to ensure their children attend school. And it lies in sorting out the laws to enable affordable housing to be built in this country.