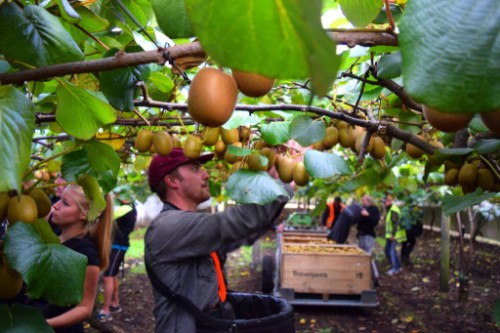 A critical shortage of workers in the kiwi fruit industry – while 118,755 New Zealanders are registered as unemployed – is symptomatic of a welfare system that is failing in its core purpose of ensuring able-bodied beneficiaries transition into work.

It’s also indicative of the dangerously addictive nature of welfare – which has been described as the social policy equivalent of hard drugs – by encouraging dependency and creating social dysfunction.

Our benefit system was not always as destructive as it is today. For the first thirty years New Zealand’s welfare system worked well.

Introduced by Michael Joseph Savage in 1938, state welfare supplemented the community-based charitable efforts that had traditionally assisted the needy. Right up until the sixties fewer than 15,000 people received state welfare, with under a thousand of those unemployed.

The support they received was not overly generous, but it was sufficient to tide someone over until they found a new job. And there was a strong incentive to seek employment, as they were appreciably better off in work than they were on a benefit.

As far as single mothers were concerned, time-limited social assistance was available from when she was around 8 months pregnant to the time her baby was either three months old if it was bottle-fed, or six months if it was breastfed.

Emergency assistance was also available to women whose relationships had broken down, so they had support while they regained their independence.

A well-established social contract existed between taxpayers and the government – only people ‘of good moral character and sober habits’ were entitled to welfare. That meant that anyone exhibiting indolent or destructive behaviours, such as alcoholism, drug addiction, and criminality were not eligible for taxpayer-funded benefits.

Those who were ‘undeserving’ were helped by charitable organisations, who gave them food and shelter – usually in return for work. No-one starved and there was no welfare underclass.

In the late sixties, however, amid growing concerns that the benefit system was losing relativity with rising living standards, the Holyoake Government established a Royal Commission of Inquiry to review New Zealand’s social security system. In March 1972, the Commission, under the chairmanship of Sir Thaddeus McCarthy, published its report, Social Security in New Zealand.

New Zealand’s welfare problems started when Norman Kirk’s 1972 Labour Government, decided to adopt many of the Commission’s recommendations – instead of sticking with the system that worked.

Three changes, in particular, proved disastrous for New Zealand, by giving rise to a permanent dependency culture and an emerging underclass.

Secondly, by raising benefit levels to be similar to a working wage, Labour effectively undermined the value of work. This set the scene for welfare to become a lifestyle choice.

Labour’s third change, driven by the radical feminist ambition to destroy the nuclear family, was the introduction of a stand-alone Domestic Purposes Benefit for single mothers. By subsidising family breakdown and sole parenthood, the DPB not only marginalised fathers, leaving mothers struggling to raise their children on their own, but it entrenched a dependency culture that put children at serious risk of abuse and neglect.

The long term consequences of Labour’s changes were devastating. Generations of children who were raised in deprivation in families with a culture of violence, no history of work, and no interest in education, began repeating the cycle of dependency themselves.

When National was elected to Government in the early nineties, they focussed on breaking the dependency cycle, but those reforms were reversed when Labour returned to office in 1999.

After 9-years, the legacy of Helen Clark’s Labour Government was a welfare system that had become far easier to access, but far harder to leave. With only a third of all working age beneficiaries work tested, intergenerational dependency had grown to a point where, in a 2007 Colmar Brunton poll, 8 out of 10 New Zealanders said the country had a serious ‘underclass’ problem – an underclass that could only exist because Labour had failed to make the receipt of a benefit contingent on the need to look for work and take available jobs.

Estimated at around five percent of households, the underclass comprised fragmented families, who no longer held traditional values of work, study and self-improvement, but expected the government to provide for them. The destructive and antisocial behaviours of parents put their children at risk of abuse, alcohol and drug addictions, teenage pregnancy, youth suicide, educational failure, violence and crime. There was habitual financial mismanagement, whereby benefit money was used for alcohol, drugs, cigarettes, and gambling, instead of for the necessities of life such as feeding the kids or paying the rent.

In response to the growing crisis, then Leader of the Opposition, John Key, stepped up with his 2007 speech A Fair Go For All: “Addressing the problems of the growing underclass involves tackling serious and interconnected issues of long-term welfare dependency, crime, illiteracy, poor parenting skills, social exclusion, malnutrition, drugs, and lost hope. I know we can do better. We have to do better. Because, left unchecked, the problems of a growing underclass affect us all.

“These are tough problems – very tough problems. But I have no intention of being a Prime Minister who tackles only the easy and convenient issues. I don’t pretend I’ve got all the solutions. But I can tell you that dealing with the problems of our growing underclass is a priority for National, both in opposition and in government.”

Once in Government, John Key made good his commitment and initiated the most significant re-alignment of welfare since the seventies. At the heart of National’s approach was the common-sense view that able-bodied people are better off in jobs than on a benefit – and that children living in working families do better than those reliant on welfare.

National believed that by investing in the long-term unemployed – to overcome their barriers to work – the dependency cycle could be broken. Whether through help with transportation, child care, job interview skills, budgeting advice, even relocation – they considered that with the right support, almost anyone is capable of work.

The present welfare system is based on the expectation that someone receiving an unemployment benefit will take an available job – or face sanctions. If they refuse to apply for a job, or fail a pre-employment drug test, sanctions will also apply.

Teenage parents are expected to be in education or training, and their benefits are subjected to ‘Income Management’, whereby their rent, power and other essentials are paid, with only a small allowance available for personal use.

Sole parents with children aged between five and 14 are expected to actively seek part-time work of at least 20 hours a week and accept any suitable job. Those with younger children are expected to prepare for work. In light of the poor outlook for the thousands of babies born to mothers already on a benefit, Sole Parent Support was aligned to employment law, so that once her new baby is one year old, a mother is expected to resume the work requirement she had before the baby was born.

National’s objective was to encourage single parents to take jobs as the pathway to higher incomes and a better life. Accordingly, if a mother on Sole Parent Support, who receives an annual after-tax benefit of $17,368 plus a dependent child Family Tax Credit of $4,822, was to take a job for 20 hours a week, she would be appreciably better off. She would receive the guaranteed Minimum Family Tax Credit income of $26,156, the $4,822 child Family Tax Credit, and an additional $3,744 In-work Tax Credit for her child. Altogether, her annual after tax working income of $34,722, would make her 56 percent better off in employment than on a benefit.

Over the years the OECD, has been highly critical of New Zealand’s welfare system. In particular, they have identified the sole parent benefit as the primary cause of child poverty in New Zealand. They believe that successive governments have not done enough to encourage sole parents into work.

The OECD has pointed out that the assistance provided to mothers with children in most other countries is temporary and work-related. In comparison, New Zealand’s stand-alone Sole Parent Support has weaker work requirements and more generous payments, which they say encourages women with children to stay on welfare for far too long. This has resulted in New Zealand having one of the highest rates of child deprivation and sole parent dependency in the OECD.

Like previous Labour governments, the Ardern led coalition is promising welfare reform. While one would hope that they have learnt from the dreadful mistakes that their Party has made in the past, this week’s NZCPR Guest Commentator, welfare analyst Lindsay Mitchell, is not very hopeful:

“The agreement between Labour and the Greens…commits the Government to overhaul the welfare system with the aim of lifting families out of poverty and ensuring that ‘everyone has a standard of living . . . that enables them to live in dignity and participate in their communities’.

“No kudos for originality here. This is exactly the sentiment expressed by the 1972 Royal Commission on Social Security. That commission gave us the DPB, which was followed by an explosion in unmarried births.”

Lindsay outlines some of the disastrous policy changes that Labour and Greens have signalled they intend to introduce, such as abolishing the current drug testing regime, and eliminating the penalties for not naming the father of a child. She also identifies policy changes that we are unlikely to see, such as abolishing the sole parent support benefit: “There is no reason to differentiate between job seekers and sole parents. Both need jobs. A stand-alone sole parent benefit merely legitimises and encourages single parenting, the strongest correlate for child poverty.”

In light of Labour’s disastrous welfare reform record, we would urge the Prime Minister to think carefully about the changes she plans to introduce. In particular, if she was serious when she claimed that combating child poverty was the main reason she entered politics, then her litmus test should be how successful her Government is in getting single mothers off benefits and into work.

Accordingly, she should abolish the stand-alone benefit for sole parents and provide assistance through the work-related Job Seeker Support – as the OECD has recommended.

She should also ensure that the relativity between welfare and work is carefully monitored to ensure that no-one who is capable of working is better off on a benefit than they would be in employment.

Further, people exhibiting destructive behaviours, such as alcohol and drug addictions, should be required to engage in treatment programmes. In addition, and most importantly, they should also be subjected to “Income Management”, so their essentials such as rent, power, and food are paid, with the balance – apart from a small weekly allowance – deposited into a personal KiwiSaver account, to prevent their benefit money being used for drugs and booze, otherwise they are unlikely to ever leave the welfare system.

With all of this in mind, it’s important to remember that most New Zealanders agree that it is the role of the state to help people in genuine need.

The debate about welfare centres on how best to assist those who have temporarily fallen on hard times. Without proper incentives in place to lead to work, too many beneficiaries get stuck within the welfare system, damaging themselves, their families, and their country.

Unfortunately, the history of welfare reform is riddled with naïve and destructive policies from Labour, and somewhat timid attempts by National to redress the damage. We can only hope that this time around the changes Labour implements will improve the situation, not make it worse – because ultimately, the real victims of a dysfunctional welfare system are children.

Do you believe that under Labour, the trend in the number of children growing up in families dependent on welfare will continue to decline, or start to increase?