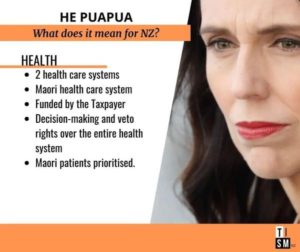 Jacinda Ardern’s Labour Government is now stumbling from one failure to the next. While the abandoned $800 million cycle bridge across Auckland Harbour cost more than $50 million on consultants, when it comes to the changes being planned for health, their ineptitude will cost lives.

Before we look into the detail of their misguided health proposals, let’s examine some background.

New Zealand’s District Health Board model was introduced in 2001 by Helen Clark’s Labour Government to bring a community focus to health care and minimise geographical disparities.

The New Zealand Public Health and Disability Act 2000 decentralised the health system and led to the establishment of 20 DHBs governed by boards of eleven members – seven elected from the community, with four Ministerial appointees.

The overall responsibility for the health system lies with the Ministry of Health, which sets the strategic direction and provides the funding.

In fact, the Labour Party in opposition was relentless in using the targets to challenge National’s performance in health, but once they became the government in 2017 and David Clark was appointed Health Minister, it quickly became apparent that they were struggling to run the portfolio.

A solution was found in early 2018: the health targets were abandoned – and a review of the health system was announced!

Heather Simpson, the former Chief of Staff to Prime Minister Helen Clark, was appointed to lead the review and a report-back date was set for early 2020.

Without targets and adequate oversight, Labour’s performance in health began to decline and waiting lists started to surge.

By 2019, the Ministry of Health revealed that DHBs were no longer on track to meet their planned annual elective surgery target of more than 200,000 procedures, with estimates showing doctors were performing 10,000 fewer surgeries than the year before.

When Covid began spreading throughout in the country in 2020 and a lockdown was imposed, hospitals were asked to clear the decks ready for an expected flood of Covid cases. They did not materialise, but the waiting list backlog that had been caused – estimated at 180,000 – left many Health Boards struggling to catch up.

As a result, by August this year, “the number of patients waiting longer than the four-month maximum for treatment in hospitals had ballooned from about 2,000 in 2017 to nearly 30,000”.

When Delta struck, hospitals again closed down, and by September 9, “The Ministry of Health confirmed health boards had cancelled about 37,000 surgeries, planned procedures or initial assessments across the country since the beginning of alert level 4.”

By September 26, the Ministry of Health revealed “an estimated 81,500 in the public system stand in line for surgeries, procedures and appointments delayed due to the Delta outbreak.”

But Labour has not only failed to ensure the system can keep up with demand, they haven’t even been able to provide the basics. In spite of the country being under threat from a world-wide pandemic, the number of intensive care beds available has been declining.

According to the Herald the number of ICU beds fell from 358 in March 2020 to 284 in August 2021. On a per capita basis, New Zealand has less than one-third of the average number of critical care beds amongst 22 OECD countries – putting us in 21st place, followed only by Mexico.

Since every ICU bed needs around five to six nurses to keep it operational 24/7, there’s an estimated shortfall of around 100 ICU nurses. In addition, the country is critically short of doctors, yet according to Immigration New Zealand, 901 registered nurses and 235 doctors are already in New Zealand waiting on the Government for residency.

With the health system already under serious pressure, it is clearly sheer madness for Labour to consider pressing ahead with the upheaval that would be caused by major reform at this time.

Let’s look at what is being planned.

Heather Simpson’s health system review, delivered to the Government in early 2020, recommended reducing the number of District Health Boards by around half, replacing elected health board members with government appointees, introducing a new crown agency Health NZ with responsibility for health service delivery, and establishing an advisory Maori Health Authority.

These recommendations became the basis of Labour’s health policy in their 2020 election manifesto: “A central focus of a returned Labour Government will be the roll out of our plan to improve the public health system to deliver high quality services, fewer DHBs, an increased focus on equity, a Māori Health Authority that will focus on Māori health, an aged care commissioner and a Public Health Agency that will more closely link the country’s 12 public health units.”

That’s why the announcement by the Minister of Health Andrew Little in April, that DHBs were no longer going to be consolidated as promised, but abolished, came as such a shock.

This abandonment of the community focus for health care in New Zealand, and its replacement by a centralised health bureaucracy based in Wellington – without any consultation or prior warning – is regarded as a betrayal by many in the sector.

This week’s NZCPR Guest Commentator, Ian Powell, the editor of the health systems blog Otaihanga Second Opinion, and a former Executive Director of the Association of Salaried Medical Specialists, explains the situation:

“There was nothing to suggest DHB abolition in Labour’s election manifestos of 2017 or 2020. When in opposition under Little’s leadership, Labour had defended DHBs from criticism including that of the Health Ministry. There was no public discourse from government or anyone else prior to the April announcement.

“Little’s announcement was a left-field decision developed very late in the process without engagement. It caught everyone outside the inner circle by surprise. There was no mandate for it or even an earlier narrative justifying it.

“The decision to abolish DHBs and replace them with a new centralised national bureaucracy in which decision-making will be further removed from health professionals and communities was both abrupt and drastic.

“But there have been few voices expressing public concern or opposition. Some of this is due to the clever nature of the Health Minister’s April restructuring announcement.”

Calculated changes have indeed been made to minimise opposition to the health reforms.

In the run up to the 2020 election, a new Public Service Act was passed into law that reclassified DHB employees as public servants, stopping them from speaking out freely.

And in March this year the Public Service Commissioner issued a new code of conduct for board members of Crown agencies including DHBs. Described as a ‘gagging order’ by some, it came into force just two days before the Minister announced the abolition of DHBs, preventing health board members “from making political comment”.

Not only is the Government attempting to silence the health sector, they also want health care in New Zealand to be determined by race, not need.

Since the health reforms are being run out of the Department of Prime Minister and Cabinet – through a transition unit that has 25 staff and a $5 million budget – Jacinda Ardern is directly responsible.

Contrary to her election promises to the health sector and voters, she now wants to restructure health into two separate systems – a Maori Health Authority, with the right of veto over the entire health system, providing healthcare for those claiming Maori ancestry, and Health NZ covering everyone else.

This plan for Maori co-governance is, of course, a key objective of He Puapua – Labour’s blueprint for replacing democracy with tribal rule by 2040. With a Parliamentary majority and no coalition partner constraints, He Puapua is being progressed at pace – even though the Prime Minister has no mandate from voters to do so.

When asked by the Herald, whether the separate Maori Health Authority was based on He Puapua –  the Health Minister “denied the allegation, saying he had not read He Puapua”.

But Andrew Little’s response does not stack up.

Back in March 2019, when the Minister of Maori Development Nanaia Mahuta was given Cabinet authorisation to develop a roadmap for the implementation of the United Nations Declaration of the Rights of Indigenous Peoples, she set up a ministerial advisory group, which included Andrew Little as the Minister of Justice, to over-see the process.

In paragraph 6 of her Cabinet paper outlining her strategy, Minister Mahuta stated, “I propose to establish a working group of technical experts from government and Māoridom in April 2019 to help develop proposals for the plan. In making my decisions about this group, I will consult with the Minister for Māori Crown Relations, the Minister of Justice, the Attorney-General, the Minister of Commerce, and the Minister of Conservation.”

She then explained, “As I receive advice from the working group, I will consult with Ministers with portfolio interests in a Declaration plan. I expect this will include the Ministers in paragraph 6…”

It seems implausible that Andrew Little would not have read the resulting document, He Puapua, when he was on the Cabinet Committee that was overseeing the project.

To deliver the He Puapua goal of Maori co-governance of health, the health system needs to be centralised, not decentralised. That’s why Labour is breaking its campaign pledge to retain DHBs.

A fundamental pillar of our health system – ensuring New Zealanders retain their right to community-based healthcare that safeguards access to those living in isolated areas – is being sacrificed for He Puapua and the ideology of racial segregation.

The Maori Health Authority – co-chaired by Minister Nanaia Mahuta’s sister – is being justified on the basis of claims that Maori are Treaty partners with the Crown. But, since it is constitutionally impossible for subjects to be partners with their Sovereign, that is a fabrication.

Yet on the basis of this lie, our Prime Minister is planning to give the new Maori elite – those running multi-million-dollar private tribal corporations – control over public health resources and services.

But that’s not all.

Underpinning these tribal demands is the assertion that the health disparities experienced by Maori are getting worse. Yet, as social researcher Lindsay Mitchell reported in “Māori Social and Economic Indicators under Colonization: A Picture of Progress”, ‘Maori’ health is rapidly improving.

In any event, factors that contribute to health disparity are things like smoking, poor diet, a lack of exercise, and so on, not race.

It is unconscionable that our Prime Minister Jacinda Ardern is putting ideology ahead of lives by attempting to overhaul – and racially segregate – the entire health system during a pandemic.

These reforms must be stopped, so that everyone in the health sector can have a laser focus on helping to minimise the inevitable chaos that lies ahead as the Government abandons its Covid-19 elimination strategy. To do otherwise will put lives at risk.

*Do you believe the underlying reason for the Government’s abolition of District Health Boards is better health or tribal control of the health system?