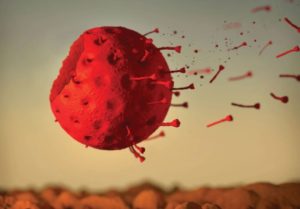 Election campaigning is now in full swing with new policies being announced daily. Since Covid-19 is such a key concern for voters, we can expect political parties to firm up their positions on how to manage the pandemic over the coming weeks.

The range of different strategies being used around the world to fight the virus – along with the benefit of time – are enabling predictions to be made about the best way forward.

The Vice-Provost of the University College of London, Dr David Lomas – a clinical academic with 35 years of experience as a respiratory physician – has outlined four different scenarios that could end the pandemic.

Firstly, a vaccine could be developed. While over 170 companies are now working on vaccine development, with three large scale clinical trials presently underway, because this process typically takes four years he believes a vaccine is unlikely to lead us out of the current crisis.

Secondly, Covid-19 could lose its infectivity. While the virus responsible for the deadly Spanish flu outbreak in 1918 appears to have lost its virulence leading to that pandemic petering out, since coronaviruses do not mutate as quickly as influenza viruses he believes this outcome is unlikely.

Thirdly, we could develop herd immunity. For this to happen, not only would a majority of the population – an estimated 62 percent – need to have contracted and recovered from the virus, but the immunity they gained would need to be long-lasting.

Fourthly, the virus could become endemic. In this case, the virus would circulate within the community with intermittent flare ups that are managed through local responses.

Dr Lomas believes this latter option of learning to live with Covid-19 is the most likely scenario.

The World Health Organisation has also outlined some thoughts about the future.

They are now strongly recommending against government lockdowns as they believe the toll on livelihoods, economies and mental health is too high. Accordingly, their recommendations ensure economies and societies remain open, with children at school and people at work.

But they make the point that since the pandemic is now being driven by mostly younger people in their 20s, 30s and 40s who don’t develop symptoms and don’t know they have the virus, there is an increasing risk of infection of society’s most vulnerable: “the elderly, the sick, people in long-term care, people who live in densely populated urban areas, and those who live in rural areas with limited health care”.

They also stress that since Covid-19 spreads so easily and can be fatal, countries opening up must be serious about supressing transmission: “Opening up without having control is a recipe for disaster”.

The WHO outlines four essential steps that all countries, communities and individuals must focus on in order to control the spread of Covid-19.

The first is preventing what they call “amplifying events”. Because the virus spreads so readily amongst clusters gathered at stadiums, nightclubs, places of worship, weddings, funerals, on buses, trains, and in other crowded places, if there is the possibility of an outbreak, creative ways of reducing the risk must be found if such events are to go ahead safely – such as wearing masks on public transport and screening movies at drive-ins instead of theatres.

Second, the government must prioritise protecting vulnerable groups, including older people and those with underlying health conditions.

Third, individuals need to play their part by staying at least a metre away from others, washing hands regularly, practicing respiratory etiquette (coughing into your elbow), and wearing a mask. Their advice is to avoid the three Cs – closed spaces, crowded places, and close-contact settings.

And, fourthly, governments must find, isolate, test and care for cases, and trace and quarantine contacts.

The WHO believes that following these four steps will eliminate the need for lockdowns. In other words, they believe we have to learn to live with Covid-19, keeping our societies as open as possible while breaking chains of transmission and controlling the infection in order to do “the least damage to our society but the most damage to the virus”.

Our lockdown remains one of the most heavy handed approaches taken by any government in the world. That’s why the consequences have been so severe – not just in terms of business failures and rising unemployment, but in people becoming sick or dying because they were denied the health care they needed.

This week’s Guest Commentator journalist Steve Waterson, an editor at The Australian who worked in Auckland for over a decade as the New Zealand Editor for Time Magazine, is scathing about the heavy-handed approach taken by politicians:

“New Zealand is lauded as the perfect example of how to crush the virus, but would anyone be surprised if it too has to pay the price somewhere down the line? Four new cases locked down the 1.6 million inhabitants of Auckland in a monstrously excessive overreaction that would be comical were it not so destructive.

“Meanwhile, the rest of New Zealand has shut down so completely it has effectively removed itself as a nation from the international community. It’s as though the country had never existed. Soon it will be reduced to a fading Cheshire Cat image of its Prime Minister’s saintly sad face.

“Let’s hope for the Kiwis’, and everyone else’s, sake a vaccine is found soon, although the World Health Organisation now warns we may never have one.

“It’s a tired line to repeat, but even after 40-odd years of searching, we don’t have one for HIV-AIDS… Which, if anyone needs reminding, still kills 2,600 people a day.”

Like many others around the world, while in lockdown Steve had to watch on from afar as his elderly father had a fall, was taken into hospital, then a rest home, and without the support of family and friends, sadly, passed away. His story epitomises the inhumanity of lockdowns.

While each country has to find its own way of living with the virus, we can learn from each other.

Sweden took a different approach by using voluntary constraints rather than the totalitarian controls favoured by our government. While the number of fatalities is relatively high, most of their deaths can be linked to the unfortunate spread of the virus into some of their large rest homes during the early stages of the pandemic. They have, however, avoided most of the other disastrous repercussions of lockdowns.

Norway imposed intrusive lockdown restrictions on the basis of academic modelling. Their health agency had recommended against such harsh measures, especially as the number of infections was already coming under control before the shutdown was imposed. Their director of public health now believes the information they relied on was inaccurate, and if there is another outbreak, they would “find instruments that are more gentle and more flexible”.

It was a similar situation in New Zealand. Our Government ignored advice from the Ministry of Health and imposed their harsh Level 4 lockdown based on flawed academic modelling.

But what is even more disappointing is that they appear to have learnt nothing from their lockdown mistakes, so when Alert Level 3 was imposed on Auckland last month, instead of more sensible restrictions, there was little change. As a result, the damage to Auckland has been more severe than it needed to be.

A new analysis from the Wall Street Journal finds it is the draconian restrictions imposed by governments around the world that have created the deepest peacetime slump since the Great Depression..

The article provides some interesting statistics.

In the US, nursing homes account for 0.6 percent of the population, but 45 percent of Covid fatalities. Fewer children have died this year from the virus than from flu.

Studies from Sweden, where most schools stayed open, and the Netherlands, where they reopened in May, found teachers at no greater risk from the virus than the overall population. This suggests that operating schools with protective measures in place will not worsen the epidemic but will alleviate the toll on working parents and children.

The article finds “Masks may be the most cost-effective intervention of all… The German city of Jena in early April ordered residents to wear masks in public places, public transit and at work. Soon afterward, infections came to a halt. Comparing it to similar cities, a study… estimated masks reduced the growth of infections by 40 to 60 percent.”

They predict innovative testing methods could enable economies to re-open safely without a vaccine. One such development is a paper-strip test that can detect the virus in saliva within minutes. It is thought that if 50 to 60 percent of the population in hot spots regularly took such a test, the disease could be suppressed without the need for draconian lock-down measures.

A plan for shutting down infections, without shutting down economies has been outlined by a team from Harvard University. Through social distancing, the wearing of masks, limiting the size of group activities – especially indoors – but allowing schools to remain open, increasing testing and quarantining, and enhancing protections for the elderly, they believe economies could remain open with limited deaths.

When California’s cases surged after their lockdown was lifted, mask wearing was encouraged, indoor activities at restaurants, bars, museums, zoos and movie theatres were closed, but outdoor activities and elective surgery remained unrestricted. The result was a drop in cases and a 35 percent decline in hospitalisations.

It’s a similar story in Arizona – after stay-at-home orders were lifted in early May, cases soared, but once masks were worn, indoor businesses like bars, gyms, and movie theatres closed, restaurants operated at no more than 50 percent capacity, and gatherings were restricted to 50 or fewer, cases and hospitalisations fell sharply.

According to the Washington Post, Arizona is also leading the way in using wastewater testing to keep their economy more open economy, with the University of Arizona finding and stopping a Covid-19 outbreak before it even happened!

The University, which is trialling a mix of online and in-person courses — elected to test sewage from all 20 halls of residence once students returned to the campus. When a wastewater sample from one dorm came back positive, all 311 people who live and work there were tested. It turned out that two asymptomatic students were positive. They were quickly quarantined, and contact tracing and testing began, halting the spread of the virus before a major outbreak threatened all 5,000 students.

New Zealand has also been trialling wastewater testing for Covid-19. This raised speculation that it was the finding of positive samples that had led to the government suddenly promoting mask wearing as we approached 100 Covid-free days – just ahead of the Auckland community outbreak being announced. While this has been denied, the technology, nevertheless, should be able to provide another layer of defence through early detection protocols.

In fact, with rest homes housing some of New Zealand’s most vulnerable residents, surely regular wastewater testing of these facilities should be prioritised in order to identify cases as soon as they appear and head off life-threatening outbreaks.

Meanwhile, although a vaccine remains elusive, progress is being made on the treatment of critically ill Covid-19 patients, with the WHO now recommending the use of corticosteroids to reduce the inflammatory response associated with cytokine storm syndrome. Many other promising treatments are in the trial phase and are expected to be recommended soon.

To date our politicians have not explained how they think New Zealand can “live” with Covid-19. Most seem to think a vaccine will ‘save’ us, but with few experts suggesting that is realistic, we await their policy releases with interest!

*Do you believe a vaccine will end the pandemic or will we have to learn to live with Covid-19?