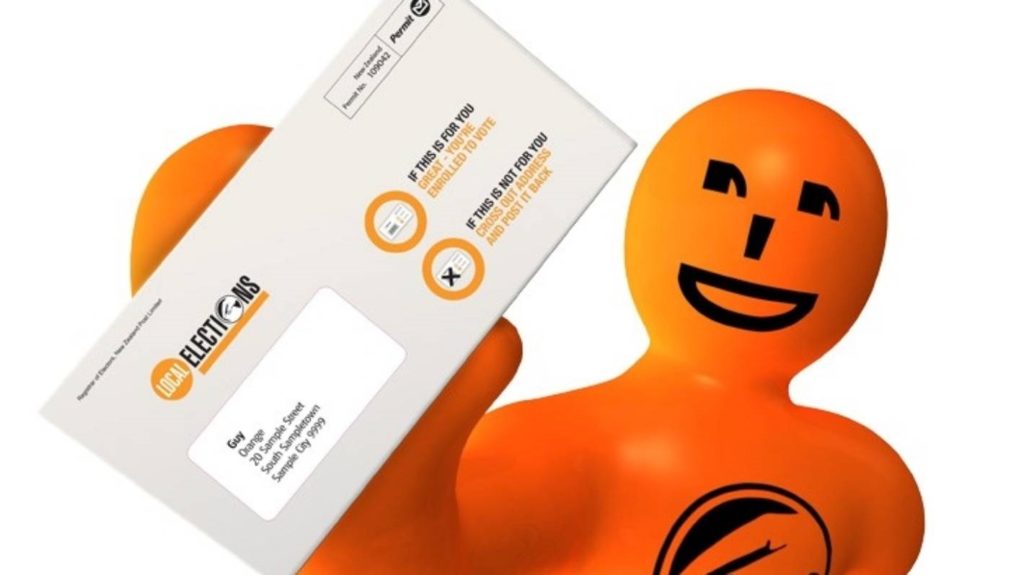 Local body elections have been and gone. Over 2,000 candidates stood for councils and community board positions on 67 local authorities up and down the country.

“I’ll do my best. But I can’t promise anything” was a billboard message that gave Tauranga locals a chuckle, as a sleepy-looking Mark Sheaff – who wasn’t a candidate – made his point! 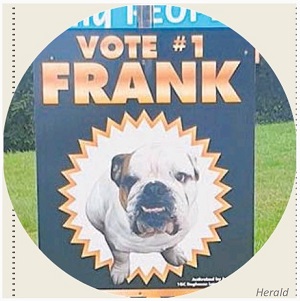 Frank, the bulldog, who featured on billboards in Lower Hutt was clearly hoping to impress with his smile! He is said to have persuaded at least one voter to add him to her voting paper!

There were candidates who filled in the wrong form and entered the wrong race. Others filled in nomination forms then wanted to withdraw, but missed the deadline. Some used biodegradable billboards that fell apart in the rain. And there were the all-important voting booklets, that had candidates’ 150 carefully chosen words – next to the wrong photos!

Some candidates felt compelled to use the opportunity to highlight their serious concerns by standing on a principle with little expectation of success.

One of those was Michael Coote, who stood for the Auckland Mayoralty. He wanted to give Aucklanders, concerned about the rise in race-based privilege, the option of lodging a protest vote for racial equality. His campaign statement in the voting booklet  said:

“Multi-ethnic, multi-cultural Auckland City must be a society of strict racial equality for all. Auckland Council must respect this fundamental principle of modern liberal democratic civilisation. There is no justice in Auckland Council granting, enabling or facilitating special rights and privileges, or providing separatist treatment, for any part of Auckland’s diverse community on the basis of racial or ethnic affiliation. For example, Auckland Council’s plans, policies, procedures and structures should not discriminate in favour of Maori members of the community over any others, but should apply equal status, validity and opportunity to all Aucklanders as residents and ratepayers. Any aspect of Auckland Council which does not conform with racial egalitarianism should be abolished, as too should be entities such as the Independent Maori Statutory Board, which places voting members on Auckland Council committees who are unelected by the general public. If you agree, please vote for Michael Coote.”

And 5,530 people did agree, voting Michael 7th out of the 21 candidates in the Mayoralty race. While he is not able to personally promote this cause from within Council, one hopes that his stand will encourage those who have been elected to speak up for racial equality.

And it’s not just in Auckland where councillors need to take a stand, but all around the country.

“Just prior to the Local Government election, the  Otago Regional Council voted to appoint two representatives of Ngai Tahu with full voting rights onto the Policy Committee, which deals with the allocation of fresh water. This decision – in the final days of the ORC’s train wreck tenure – was as wrong as it was predictable. It is an affront to representative democracy as we expect it to function.

“The question as to why we the people were never consulted over this appointment is obvious. Reserving seats for Ngai Tahu to the full council would  have opened up the council up to a petition to hold a referendum of the people of Otago – which could easily have been included in the Local Government election process.”

The question for the new council is whether they will revoke the anti-democratic decision made by their predecessors that unelected and unaccountable iwi would sit at the council table with the same voting rights as elected councillors. While elected representatives swear an oath requiring them to act “in the best interests of this region”, the allegiance of appointed Ngai Tahu representatives is solely to their Iwi.

With the committee they joined being responsible for the allocation of freshwater in the region, and with Ngai Tahu Corporation operating many businesses that rely on freshwater, their conflict of interest is plain to see.

When the matter was debated by the former council, Councillor Michael Laws opposed the appointments saying they were “racist” and “undemocratic”. He was concerned the appointees would focus solely on benefits for Ngai Tahu, rather than the best interest of the Otago region.

Now that Cr Laws has been re-elected, he should be encourage to table a motion to revoke the previous council’s decision on the basis that it was undemocratic and that the people of the region were not consulted.

In his article, Gerry expresses concern that council Codes of Conduct are being used to silence councillors who want to speak out.

This point is also made by former councillor Frank Newman, who believes it is one of the reasons local politicians don’t engage with voters in a more meaningful way: “The problem here is councillors become intimidated into silence, not only by a hateful minority, but also by their own council’s Code of Conduct. All councils are required to adopt a Code of Conduct setting out how elected members should behave. In practice it becomes a weapon used by councillors to muzzle other dissenting councillors. Dissention in politics is nothing to be feared; it is a sign of a healthy democracy.”

All in all, the 2019 election results delivered a mixed bag of expected and unexpected results – including 26 new mayors, the largest number in 30 years.

In our biggest city, while incumbent Phil Goff romped home as Mayor of Auckland with double the number of votes of his nearest rival, “an embittered and tearful John Tamihere put his significant loss down to his ethnicity”, saying, “the commentariat hates a brown boy’s guts”, and, “the fact of the matter is that a West Auckland, working class, mixed ethnicity Maori was never going to make it” – comments which are, of course, ridiculous.

Lianne Dalzeill easily won in Christchurch, but in a major upset in Wellington, the Labour-leaning Mayor, who was trying to turn the city into the te reo capital of New Zealand, was defeated by long-time councillor Andy Foster, who had the backing of Sir Peter Jackson.

Invercargill Mayor Tim Shadbolt was re-elected for his 9th term to become New Zealand’s longest-serving mayor. Aaron Hawkins, a 35 years old vegetarian who cannot drive and often hitch-hikes to work was elected Mayor of Dunedin on a Green Party ticket, and 28-year-old Campbell Barry won the Hutt City mayoralty from Ray Wallace to become the country’s youngest ever mayor.

As far as councillors are concerned, Sophie Handford, the 18-year-old national co-ordinator for the School Strike for Climate movement, was elected onto the Kapiti District Council, making her among the youngest ever voted into local government in New Zealand.

Three 19 year-olds were also elected – Fisher Wang to the Rotorua Lakes Council, Rohan O’Neill-Stevens to the Nelson Council, and at 9 am on the day that nominations closed, Tauranga barber Stacey Rose threw his hat into the ring of the Bay of Plenty Regional Council, and by 2 pm was elected unopposed!

In the run up to the election, there were grave concerns about poor voter turnout. Kiwis were berated about our cavalier attitude to local democracy.

A great deal was also written about gender balance on councils.

According to the provisional figures, it looks like the number of women elected will be close to 40 percent, up from 38 percent in 2016, and 30 percent in 2010.

In 2016, three councils in the country had a majority of women councillors, and another four councils were evenly split. This year it looks like 5 councils will have a majority of women and 10 will have equal numbers of male and female councillors. The results show that change is indeed taking place, and that intervention by the Green Party’s Minister for Women, Julie Anne Genter, who is pushing for gender equality, is not needed – especially when the ‘best person for the job’ should drive voting decisions, not politically correct quotas.

But the Minister is not just pushing for more women – she wants ‘true diversity’: “It’s not just women, we need all types of diversity… I would like to see more diversity of age, diversity of ethnicity and background… people who are differently able.”

Indeed, lobbyists continue to claim that local democracy is failing to deliver fair representation for minority groups, but the reality is that the local government oath of office demands those elected to work in the best interests of their whole community – not vested interest groups.

In the run up to the election, the need for young people’s concerns to be represented at the council table led to a renewed call to lower the voting age to 16.

The “Make it 16” campaign was launched in Parliament last month. One of their main gripes was expressed by 17 year-old Pierson Palmer, who said they were “getting tired of listening to adults being very condescending, knowing that we actually, in the long run, have no say, and in the end, our points of view are being trivialised by politicians and by people older than us just because of our age”.

This Green Party backed group intends using a High Court challenge to try to get the voting age lowered: “Politicians … are allowing discriminatory laws to stay in place and we are going to challenge that through the court system. The campaign will argue the current voting age of 18 was ‘unjustified age discrimination’ and that the High Court should declare it inconsistent with the Bill of Rights Act.”

Astonishingly, the campaign has the support of the Children’s Commissioner. Quite why this so-called non-partisan Government appointee believes it’s a good idea to back a Green Party political campaign is not clear.

It’s also not clear who will pick up the tab for their proposed High Court action. In the interests of transparency, Make it 16 should reveal their backers.

The main concern about the voting age relates to whether or not 16 and 17 year-old have the maturity to discern truth from propaganda, and to understand the complexities of the issues that are at stake. This is not a trivial matter – it is difficult enough for adults to make those judgements these days, let alone children.

Having recently witnessed the manic groupthink of young people – led by Swedish 16-year-old Greta Thunberg – as they protest over climate change, there is little to suggest they have the wisdom to vote on matters of national significance. We don’t even trust them to drink alcohol responsibly!

The reality is that 16 year olds are highly susceptible to political indoctrination, which is no doubt exactly why the Greens would like them to be able to vote.

There is no doubt that New Zealand voters should be more engaged in local body politics, since the services they deliver are vital to our wellbeing, and the amount we pay in council levies and fees is considerable. Not only that, but low voter turnouts leave councils vulnerable to takeover by well-organised special interest groups – and that’s not in a community’s best interest.

So, as we look ahead to the next three years, good luck to all of the newly elected councillors – we hope you will be able to reach out to your community to make local politics more interesting and relevant. And to all those who stood for election and didn’t make it, well done for giving it a go – and don’t forget, if you plan to try again at the next election, your campaign should be starting now!

Do you believe the voting age should be reduced to 16?