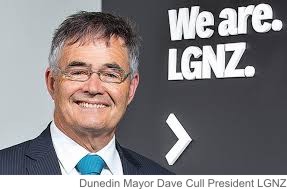 Last month Dunedin Mayor Dave Cull, the President of Local Government New Zealand – the union that represents the country’s 78 local authorities – wrote an open letter to the coalition Government calling for the removal of the petition rights that allow local residents and ratepayers to demand a poll if their Council unilaterally decides to establish Maori wards.

Under section 19ZD of the Local Electoral Act 2001 a councils can elect to hold a public referendum in order to decide whether or not to establish Maori wards. This reflects the fact that such a change fundamentally alters the democratic makeup of a council and by convention, changes of a constitutional nature in New Zealand can only be undertaken with the express approval of voters.

If a council however, chooses to introduce a Maori ward unilaterally, their decision can be challenged through section 19ZB of the Act, which gives residents and ratepayers the right to force a referendum – if 5 percent of voters sign their petition.

Referenda decisions are binding on councils for the following two elections.

The Maori wards provisions in the Act mirror those for changing the voting system, which is the other major constitutional change provided for in the legislation. Under Sections 27 to 34, councils can change between First Past the Post and Single Transferable Voting through a public referendum process. But if the decision is made by the Council alone, it can be challenged if 5 percent of local electors support a petition for a referendum.

In his letter to the government Dave Cull ignores this glaring inconsistency, and instead tries to argue that establishing Maori wards is no different from altering ward boundaries, to take account of population changes. He says, “either the poll provisions should apply to all wards or they should apply to none.”

Fine – if that’s the game they want to play, let’s support polling provisions for all boundary changes!

Dave Cull tries to justify LGNZ’s attempt to remove the public’s democratic right to have the final say on Maori wards by claiming it’s all about increasing Maori representation. What he fails to acknowledge is that the “principle of equal treatment enshrined in the Treaty of Waitangi” runs two ways – all New Zealanders should be treated the same and have the same rights to representation.

But Maori do not need reserved seats on local councils to increase representation, as it is already growing steadily – from 4 percent in 2004 to 10 percent in 2016. If it follows the trend in Parliamentary representation, where 18 percent of elected MPs are now Maori (24 percent if the seven reserved Maori seats are included) – up from 12.5 percent in 2005 – by the next local body elections, the number of Maori represented in local government is likely to be close to proportionate.

The reality is that New Zealanders do not want to be defined by race – not even those of Maori descent. As LGNZ notes, “a number of councils have sought the views of hapu and Iwi about whether or not Maori wards should be established in their district only to be strongly advised that any such wards would not have the support of mana whenua.”

It appears that the only people, who want to divide the country by race, through Maori wards, are a small but vocal minority of tribal elitists and their supporters like LGNZ – and the former New Plymouth Mayor Andrew Judd.

Andrew Judd started his battle over Maori representation on the New Plymouth District Council in 2014. He had been approached by local iwi demanding a greater say in council decision-making, but since the Council rejected his plan to appoint iwi representatives onto council committees with full voting rights, he proposed Maori wards instead.

This was challenged by local resident Hugh Johnson, a retired engineer and former Lower Hutt councillor, who collected signatures from more than 5 percent of voters to force a referendum. The Maori ward was rejected by 83 percent of local electors.

Mr Johnson explained that he called for a referendum because he believed voters should have a say in a change as fundamental as the establishment of Maori wards: “I believe we are one country, one lot of people, not divided. The Maori seats in Parliament separates the Parliament and we don’t need to spread it out into local government. It’s as simple as that. If you want to get voted on council, you go through one voting system.”

In response to the defeat, Mayor Judd called the citizens of New Plymouth racists, and vowed to fight to remove the right of local electors to call for a poll on Maori wards. He also called for 50 percent of all councillors to be Maori.

The public response to Andrew Judd’s divisive proposals was outrage. As broadcaster Mike Hosking said at the time, “Is it a pre-requisite to be an idiot to run for local body politics? New Plymouth’s Mayor Andrew Judd has dreamed up the idea that the law should be changed so that half of all councillors are Maori. He’s already wanting to create a Maori ward. He bases all of this on the Treaty – yes, the same Treaty the Tribunal suggested hadn’t ceded authority to the British. Top tip for the Andrews of this world: firstly, councils are in the business of mowing lawns, collecting rubbish, not for social and historic engineering; secondly, no country’s future is based on segregation – or giving one race a false hope, or false start, or false advantage based on nothing more than skin colour. This is a recipe for disaster and acrimony, and New Plymouth – not to mention the rest of the country – deserves a hell of a lot better.”

Andrew Judd did not stand for re-election in 2016, but was instead heralded as a leader for the Maori sovereignty cause. Supported by the Maori Party, he presented a petition to Parliament asking that “the House of Representatives consider a law change to make the establishment of Maori wards on district councils follow the same legal framework as establishing other wards on district councils”.

Using the erroneous and dishonest argument that establishing Maori wards is essentially no different to changing ward boundaries, he claimed that the right to call for a public poll on the creation of Maori wards is discriminatory and racist and should be abolished.

The petition – signed by him alone – was sent to the Local Government Select Committee. Unbeknown to most New Zealanders, the Select Committee called for submissions on the petition last year. But they didn’t do it openly – so Andrew Judd’s attempt to undermine local government democracy could be widely challenged – instead, they combined it with their review of the 2016 Local Body Elections. As a result, there were only a handful of submissions.

The submission from LGNZ supported the petition, recommending, “That the petition of Andrew Judd, to remove the poll provisions applying to Maori wards is supported by the Select Committee.”

In spite of almost all council attempts to create Maori wards being defeated over the years – clearly showing that New Zealanders do not want their local authorities divided by race – LGNZ’s National Council promoted the removal of polling rights as a policy recommendation for the 2017 General Election: “The ability to demand a poll to overturn a council decision to create a Maori ward or constituency is anomalous and discriminatory and should be removed.”

It’s not clear whether these fifteen National Council members voted unanimously to remove the Maori ward poll provisions, or indeed whether they sought the views of the 78 local authorities that they claim to represent.

But what we do know, is that the President’s letter to the leaders of Labour, New Zealand First, and the Greens, calls for the governing coalition “to remove those sections 19ZA to 19ZG of the Local Electoral Act 2001 that allow for polls of electors on whether or not a city, district or region can establish Maori wards.”

Taking away the rights of residents and ratepayers to oppose the formation of Maori wards is, of course, the first step towards Andrew Judd’s goal of 50 percent Maori representation on local authorities. Once councils are free to unilaterally introduce Maori wards without any consultation with locals, there is nothing to stop them increasing the number to 50:50 Maori to non-Maori representation.

If the new Government agrees with LGNZ and removes the polling provisions, then the country will indeed be on a slippery slope to 50:50 race based governance.

What are the chances of Government support? Since Labour and the Greens supported a Private Members Bill by Green MP Marama Davidson to abolish local body Maori ward petition rights last year, they will likely be in favour. But the passage through Parliament of such a law change would require the support of NZ First. They could therefore block such a move – if they so wished – although there’s always a danger that they may horse-trade their support for other policy concessions.

This week’s NZCPR Guest Commentator is Western Bay of Plenty Councillor Mike Lally, who voted against his council’s decision to establish Maori wards:

“In November 2017, Councillors voted to establish race-based wards, which would guarantee seats for Maori. Fortunately, the law currently allows such decisions to be put to a referendum if 5 percent of eligible voters sign a petition.

“Concerned ratepayers quickly joined forces gathering signatures. We were inundated with people wanting to sign and we collected significantly more than required to force the Council to listen to the people. It is noteworthy that supporters included Maori residents who also had no desire for such racist policies.

“It was heartening for me to see democracy at work. Most New Zealanders undoubtedly want a level playing field with one set of rules for everyone, regardless of who our ancestors were.”

While all five councils may find their attempts to ‘patronise’ Maori by creating special race-based seats will be rejected by their local communities, unless the wider public steps up and takes action, we may find that LGNZ succeeds in convincing the Government to abolish these crucial petition rights. If you want to help prevent this, here are five things you can do.

Secondly, contact your local councillors and ask whether they support LGNZ’s attempt to undermine local government democracy by abolishing the Maori ward petition rights. And if they don’t, ask what they and their council intend doing about it.

Thirdly, contact MPs and ask where they stand – do they believe in undermining local government democracy by abolishing Maori ward petition rights, or will they join the fight to retain them.

Fourthly, contact your local newspapers to raise public awareness of what’s going on.

And finally, share this information as widely as you can to help send a message that if New Zealanders care about democracy they must join this fight against those seeking to undermine our local democratic rights.

Do you agree with LGNZ that the public’s right to call for a binding referendum on Council proposals to establish Maori wards should be abolished?