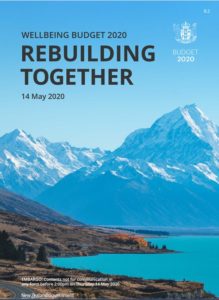 In his weekly newspaper column, Dr Steve Elers, a senior lecturer in journalism at Massey University explains the importance of recognising the underlying philosophy that drives those who are running our country. He says:

“We would be fools to believe political decisions are primarily evidence based. Given we are facing what is likely to be many years of economic turmoil and hardship, the political ideology of our Government needs to be laid bare so we can gain insights into what a post-Covid-19 New Zealand economy might look like.”

Since Prime Minister Jacinda Ardern plays such a pivotal role in this Government, Dr Elers believes understanding what motivates her will help us to better appreciate the direction in which she is taking New Zealand:

“It’s a fair assumption to suggest that at the time of entering Parliament, an MP’s political views and beliefs are set and are the motivation to enter politics in the first place. Accordingly, to understand Ardern’s political ideology it is important to revisit 2008, when she entered Parliament as a Labour list-MP.”

He explains that it was in 2008 that Jacinda Ardern was elected president of the International Union of Socialist Youth, a movement whose purpose is to “defend and spread core socialist principles”.

In early 2009, just two months after becoming an MP, she presided over the union’s World Council annual meeting in her capacity as president. At that meeting attendees discussed “progressive answers to the financial crisis”.

Dr Elers wonders whether those answers might be guiding us through this post-Covid-19 period:

“So, what ‘progressive answers to the financial crisis’ did Ardern and her comrades come up with? (I have used ‘comrade’ because it is how union members referred to themselves throughout the 2009 meeting.) Did they propose ideas that would stimulate the economy so businesses could thrive thereby creating job opportunities?

Dr Elers concludes, “Ardern and her comrades think it’s best that everyone is equal and this is achieved through securing a ‘redistribution of resources’.”

It is this redistribution agenda to achieve equality that is likely to underpin the Government’s recovery plan. There is no doubt the mass unemployment and social disruption caused by the Prime Minister’s “go early, go hard” response to COVID-19 has created an environment conducive to radical economic and social reform. It is an opportunity no politician who has sworn an allegiance to a “social democratic system” would ignore.

That much is revealed in the 2020 Budget commentaries.

In the  Forward to the Budget the Prime Minister indicates that her Government is planning a major ‘reset’ for the future:

“We began again knowing that we had the chance to reset some things and embrace any opportunity, albeit uninvited and unwelcome, offered to us by the disruption to business-as-usual that COVID-19 caused. And that is what Budget 2020 delivers.”

In her Parliamentary address, the PM said, “Prior to the virus we faced serious long term challenges – persistent inequality and poverty, the threat of climate change, the need to diversify the economy, low productivity, limited domestic manufacturing and an abundance of low paid jobs. Do we return to those settings or is now the time to find a better way?”

She stated that her Government has a plan to “rebuild in a way that makes things better than they were before”.

The Minister of Finance confirms that a reset is being planned in his Budget speech, and he outlines what it will entail:

“The glimmer of silver lining on this darkest of clouds comes from the knowledge that we have the opportunity to build back better.  There are few times in your life when you get to hit the reset button. It is an opportunity we will not squander.”

He says, “The answers lie in the great traditions of the First Labour Government who rebuilt New Zealand after the Great Depression.  It was a time when they understood a genuine partnership between government and the people. We are taking those principles into the modern era.”

He’s ruling out free enterprise. “We can also draw the lessons of the past as to what not to do in response to a major economic shock. As the economic carnage of the 1980s and 1990s wreaked havoc in our communities, I saw that up close.  It was based on a tired set of ideas that the market would save us, that if government sat on the sidelines all would be well.  Well, it didn’t work out that way and lives and livelihoods were lost. That will not happen again, not on the watch of this government.

According to the Minister of Finance, “This Budget takes… us down a path where we will face choices as to how we begin to repay some of our debt… We will grow our economy sustainably to pay back our debt, we will fairly share that burden, and above all we will do it together… It is just the end of the beginning, the next chapters are ours to write.”

So, there we have it. We are now standing at the beginning of a new era and will soon be subjected to a radical plan for social change based on the philosophy of old Labour socialism. Clearly the Prime Minister and others within her caucus – like the Chairman of Parliament’s Finance Select Committee Deborah Russell who wants “real, radical equality” and New Zealand to be “the most equal country in the world” – will use this historic moment to impose the ghost of Karl Marx onto New Zealand.

Behind the socialist narrative are figures that reveal the scale of the economic damage Jacinda Ardern’s lockdown has caused. The economy is projected to shrink by 4.6 percent in the year to June – the worst contraction since the Great Depression – and Government debt will rise more than at any other time in our history.

What the Government has not revealed is how this massive debt will be repaid. That’s hardly surprising given the September 19 General Election is only 17 weeks away.

According to Treasury forecasts, unemployment, which is growing at present by 1,000 a week, could rise from 4.9 percent in January to almost 10 percent by September. Many commentators, however, think this is far too optimistic and that things will get much worse.

Indeed their concerns are valid since the budget’s predictions are based on a vaccine becoming available: “The main forecasts incorporate further recovery beyond next year. This is predicated on the assumption that COVID-19 no longer poses a significant threat globally (eg, an effective vaccine is available), thereby supporting renewed global growth, which combined with the removal of border restrictions supports renewed international tourism flows.”

In other words, if a vaccine is not found, as a result of Labour’s reckless borrowing, New Zealand’s future is dire.

With families and businesses now struggling to cope with the fallout from the lockdown, it is difficult to understand why the Government is refusing to postpone the 4 cent a litre increase in petrol tax that is scheduled for July.

Almost all goods and services have a fuel cost component so an increase in fuel tax is an increase in production costs for just about everything. Another cost is the very last thing the economy needs when so many are fighting to survive.

When times are tough most people do what they can to minimise outgoings. Yet there was no indication in last week’s budget that the Government intends trimming wasteful spending – no signal to departments or ministries to make savings, and no suggestion that public expenditure will undergo stringent line by line reviews.

Instead Budget 2020 was all about borrowing – and spending. That means more tax – a lot more tax. The increase in fuel tax is just the start.

Business columnist Damien Grant has described the budget as an ‘economic catastrophe’:

“The scale of the economic vandalism being unleashed on this country rivals that of Sir Robert Muldoon. This prime minister and her finance minister, in cahoots with a weak central bank governor, are destroying 36 years of prudent fiscal and monetary economic management.

“This is an inexperienced government who have panicked at the economic fallout of their recent decisions. In order to avoid the inevitable and painful reallocation of resources required after a major economic shock they are not only destroying the Crown’s balance sheet – they are undermining the integrity of critical institutions and traditions.”

To achieve the ‘equality’ Jacinda Ardern’s Labour Party desires, it’s an inescapable reality that they are planning to take from the ‘rich’ to give to the ‘poor’. Through a radical ‘redistribution of resources’, they will take large sums from a relatively small number of households, to give smaller amounts to a large number of households that constitute their voter base. That’s how redistribution works – it is based on the principle that any government that takes from a few and gives to many is likely to win a majority of votes.

That’s modern socialism. That’s what lies ahead for New Zealand.

What form those taxes to repay the debt will take is unlikely to be revealed in detail before the election. Labour will instead talk about jobs. Only after the election will they admit the amount that is required to repay the debt is too large to be collected from income tax alone. Inevitably a capital gains tax will be back on the table, as will wealth taxes.

Budget 2020 signals that this is to be a government-led recovery – the Government that failed so miserably with KiwiBuild, now intends running the economy from the Beehive.

This week’s NZCPR Guest Commentary is a presentation to Parliament’s Epidemic Response Committee by economist Dr Bryce Wilkinson. A Senior Fellow with the New Zealand Initiative, Dr Wilkinson explains that history is unequivocal – government-led recoveries don’t work. The only effective way to rebuild an economy is through a recovery driven by private enterprise:

“The great clamour in the community currently is for more money to spend. They are turning to government by default. But the only way for the community to generate greater income is through job creation and productivity growth. This has to come overwhelmingly from the private sector.

“People with energy and enterprise do not need government to lead them. They need to be freed up to find what other people need and do their best to satisfy that need productively. Government regulations that make it harder to employ people, hard to put housing developments in place and hard to raise overseas capital hold them and the community back.”

By imposing lockdown restrictions that were far tighter than they needed to be, Jacinda Ardern has brought the country to its knees. Now, through generous subsidies, even the private sector is becoming a State beneficiary.

There is no doubt about it – our Prime Minister is again leading the world with bold measures. This time it’s not global warming, our nuclear free moment, nor closing down the oil and gas exploration industry. It is much more fundamental and potentially far more destructive.

Jacinda Ardern is transforming New Zealand into a socialist state. And the tragedy is that most people are completely unaware that it is happening.

*Are you confident about the economic future of New Zealand?