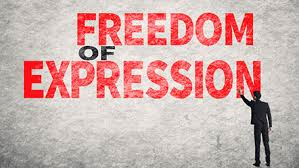 A hallmark of a free society is the liberty of its citizens to express their views without fear of recrimination. New Zealand was once that society, but not so today.

The enemies of free expression are everywhere. These are the extremists who, having failed to convince others through the strength of their argument, are willing to use force to impose their ideologies. This can occur at many levels – in the case of Islamic fundamentalists, their violent threats over-ride national sovereignty.

In 1987, Rudi Carrell, a popular comedian on German television, did a sketch poking fun at Iran’s leader. The Ayatollah Khomeini had introduced strict sharia law forbidding women from showing their bodies, so the comedian depicted them throwing underwear at his feet.

The Ayatollah claimed that by offending him, the skit offended Muslims around the world. There were violent protests, consulates were closed, diplomats were expelled, and death threats were issued against the comedian. Fearing for his life, Rudi Carrell apologised and was given police protection.

Germany’s Foreign Minister also apologised, but he reiterated his government’s commitment to the freedom of the press and artistic expression.

A year later, British writer Salman Rushdie published his fourth novel, The Satanic Verses. He was also accused of insulting Islam. The Ayatollah Khomeini issued a fatwa calling, not only for his death, but of everyone involved in the publication.

A US$3 million bounty was offered for Salman Rushdie’s assassination. He was put under police protection and went into hiding. Two years later, the book’s Japanese translator was stabbed to death, and his Italian and Norwegian translators were seriously injured. Over the years there have been book burnings, mass protests, bombings, and more killings. The fatwa and bounty on Salman Rushdie’s head remain in place.

In 2005, concerned that the fear of retribution was silencing criticism of Islam, the Danish newspaper Jyllands-Posten published a series of cartoons of Muhammad. Since visual depictions of Muhammad are considered blasphemous, the cartoons were regarded as highly offensive. But in a show of media solidarity, they were reprinted in newspapers around the world. The violent protests that followed left more than 200 dead.

In France the satirical newspaper Charlie Hebdo was accused of inciting hatred by publishing the cartoons and was taken to court. They were acquitted in 2007. In 2011, the newspaper was firebombed just ahead of publishing a satirical issue featuring Muhammad as guest-editor. And in 2015, in retaliation for continuing to caricature Muhammad, masked gunmen attacked the newspaper killing the editor and 11 other staff.

In response to the killings, the print run of a commemoration issue of the newspaper featuring a caricature of Mohammed was increased from 60,000 copies to over 5 million. The headline “Je Suis Charlie” –  “I am Charlie” – became a rallying cry for the freedom of self-expression.

While supporters of Islam allege that satire and criticism are offensive and should be outlawed, defenders of free expression argue that Islam should be exposed to the same scrutiny as any other religion. They claim the freedom of expression includes the freedom to poke fun and to have a good laugh, and that religious leaders of all faiths should respect that.

As Sir Salman Rushdie wisely observed, “There is no right in the world not to be offended. That right simply doesn’t exist. In a free society, an open society, people have strong opinions, and these opinions very often clash. In a democracy, we have to learn to deal with this.”

That is not always easy, as Israel Folau has found out.

The rugby star’s so-called crime was to post an image of a Bible passage cautioning that “drunks, homosexuals, adulterers, liars, fornicators, thieves, atheists, idolaters would go to hell unless they repented” on his social media account.

As a result of the ensuing furore, Israel Folau intended removing the post but his father, a Christian minister, warned that doing so would disown the words of God, and that “You’ll go to hell, son”.

His subsequent refusal to take the post down, prompted Rugby Australia to terminate his $4 million contract, saying the post did not align with the organisation’s values and that he had breached their “inclusiveness” policy.

Israel Folau grew up as a Mormon but later became active in the Assemblies of God Christian fellowship, where his father is a pastor.

Believing that his relationship with God is the reason for his athletic success, he reads the Bible every day and considers “it is a loving gesture to share passages from the Bible with others… whether that’s in-person or on my social media accounts”.

In 2015, in response to allegations of homophobic sledging by a team member, Israel Folau said there is no room for homophobia in rugby.

In 2017, when the Australian government was considering same-sex marriage, Australian Rugby declared the Wallabies’ support. But Israel Folau objected to them speaking on his behalf, stating on Twitter: “I love and respect all people for who they are and their opinions, but personally, I will not support gay marriage”.

In 2018, a controversial exchange on social media led him to state: “Since my social media posts were publicised, it has been suggested that I am homophobic and bigoted and that I have a problem with gay people. This could not be further from the truth. I fronted the cover of the Star Observer magazine to show my support for the Bingham Cup, which is an international gay rugby competition for both men and women. I believe in inclusion. In my heart, I know I do not have any phobia towards anyone.”

The uproar over his latest social media post is bizarre in that the Bible scripture equally condemns drunks, adulterers, liars, fornicators, thieves, atheists, idolaters, as well as homosexuals – unless they repent – but only homosexuals took offence. Everyone else just ignored the post.

At the height of the conflict, Israel Folau broke down while delivering a sermon in his Church, quoting from the Bible, “For what shall it profit a man if he gains the whole world, and loses his own soul?”

Israel Folau has now lodged legal proceedings with the Fair Work Commission against his employers under section 772 of the Fair Work Act, which makes it unlawful to terminate employment on the basis of religion.

He also launched a GoFundMe crowdfunding campaign to raise A$3 million to cover legal costs. But pressure on the organisers caused them to cancel the campaign and return the donations.

In response, the Australian Christian Lobby contributed A$100,000 towards his legal costs and set up an alternative donation site for him. More than 20,000 people donated over A$2.2 million in just two days, causing the organisers to hit the pause button: “if the case drags on and Israel needs more support, we will reopen this campaign”.

Rugby Australia is claiming that if they had not sacked Israel Folau, the financial support they receive from sponsors and the government would have been withdrawn. They also said they risked litigation from gay employees who might claim the work place is not safe or respectful.

They said that with regard to Israel Folau’s social media comments, “we do allow religious freedom but what we don’t allow is disparagement and that’s clear under [his] contract.”

In other words, they are claiming he was not sacked for his religion, but for breaching his contract. Many people however, see the issue as a battle for the freedom of religion and the freedom of expression. They say that Israel Folau should not only be free to believe what the Bible says, but that he should also be free to share his private views.

In this case – as in those involving Islamic fundamentalists – the real villains are the extremists who want to muzzle a person’s right to say what they believe.

Extremism in whatever ugly guise it presents itself, is increasingly undermining democratic rights within society. Extremists lack tolerance and respect for other people’s views. They start a campaign and use social media and their friends in the mainstream media to put pressure on the politicians.

Extremists are the ones who should be exposed for the danger they pose to society. But instead of calling them out, the normal and spineless response is to appease them – as in the case of Australian Rugby. Doing so, however, emboldens them.

Surely, when responding to extremist attacks on free expression, a principle that should apply is that organisations like Rugby Australia are there to promote sport – not political or religious views. If they had followed that principle, they would not have become involved in the gay marriage debate at all.

Whether it’s religion, gay rights, feminism, environmentalism, or race, here in New Zealand, extremists are now firmly embedded within the heart of government.

That’s why the public policy recommendations that are emerging from this administration are increasingly radical. The global warming policies that environmental fanatics are attempting to impose on the country, for instance, are now so extreme that they will destroy the economy.

Maori supremacism is also on the rise, as Labour seeks to embed separatism into all areas of government. This has emboldened Maori extremists who are now attempting a cultural takeover of society – including forcing the Maori language onto non-Maori speakers and rewriting New Zealand’s established history.

This week’s NZCPR Guest Commentator Dave Witherow, a long-time newspaper columnist, outlines how the press – the so-called champions of free expression – are increasingly restricting the right of their readers to freely express their concerns about these controversial developments:

“Twenty or thirty years ago I used to write letters to the Otago Daily Times. The editor in those days had liberal leanings, a sense of humour, and liked a bit of argy-bargy. Controversy was his meat and drink, and many a roiling argument would enliven the Letters columns, drawing in more and more participants and extending, sometimes, for months. It was democracy in action, and a lot of fun, exposing the wider readership to pages of dissension, good sense, and occasional outright lunacy. All sorts were afforded a platform, extremists were balanced by moderates, and readers could, in their own sweet time, take it all on board and make up their minds for themselves.

“That fine era came to an end. New editors came along, less liberally inclined, and there was even a quasi-Pravda period when it was a waste of time writing anything that was at all contrary to the paper’s favoured position. You could say what you like about the price of tripe, but anything contentious, if published at all, was ‘abridged’ to the point of irrelevance.

“A genuinely free press is hard to sustain. It is a perennial pain to the right-thinking majority and the upholders of the established order. It is disruptive, rather than emollient, and as that old newspaperman Ambrose Bierce once said: ‘If we’re not offending twenty percent of the readers every day, we’re doing a lousy job’.”

And that’s the point. Free expression can be uncomfortable and it may offend, but that does not give others the right to silence those views – unless they break the law by inciting violence.

The freedom of expression is a cornerstone of our democracy. It results in a stronger and more resilient society. Once opinions are silenced and society becomes stifled, it’s only a short step to totalitarian control.

We are witnessing such a transformation in New Zealand right now – as a result of the Government’s excessive response to Christchurch shooting. While a foreign madman acting alone was responsible for killing innocent people, the Police are now visiting Kiwi homes, ‘questioning’ outspoken gun owners and social media commentators, intimidating them, and in some cases hauling them off to jail.

Under Jacinda Ardern’s Labour-led Government, free expression is in danger of becoming ‘free’ in name only.