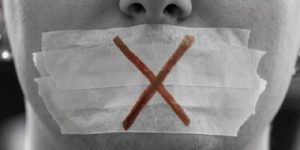 Last Friday the Minister of Justice Kris Faafoi announced that the next step in the Government’s plan to introduce hate speech laws would be two public consultation processes – the first seeking feedback on their legislative proposals, and the second asking how to build a more cohesive society.

When Prime Minister Jacinda Ardern was interviewed by Duncan Garner on The AM Show on Monday about her plan to criminalise free speech, it was all too evident that she didn’t understand the law changes she is intending to impose.

Whether arrogance or ignorance, she was wrong with virtually all of her answers.

The PM claimed the hate speech law changes were being introduced because of recommendations made by the Royal Commission of Inquiry into the Christchurch shootings: “The reason we are having this debate is that the Royal Commission said to the New Zealand Government you need to include religion”.

During the interview, the Prime Minister categorically denied that under their law change proposals political opinion could become a ‘protected’ category alongside race and religion.

The wording in the discussion document ensures all 13 protected grounds – including ‘political opinion’ – are included: “Under this proposal, more groups would be protected by the law if hatred was incited against them due to a characteristic that they have. This may include some or all of the other grounds in the Human Rights Act.”

In other words, contrary to the Prime Minister’s claim, ‘political opinion’ has not been ruled out.

The Prime Minister argued that the threshold for prosecution in her proposed hate speech law is set very high, to prevent the ‘inciting of violence’ against groups of people.

But the threshold for criminal prosecution is not high at all. If the PM had looked into the detail of what is actually being proposed, she would have realised the new law could criminalise and potentially jail someone for insulting a ‘protected’ group.

Does Jacinda Ardern really want to create a society that would have criminalised the humour of Billy T James or the writings of Barry Crump because someone somewhere felt insulted and took offence?

When the PM was asked to clarify some examples, such as whether millennials expressing hatred towards baby boomers could potentially be found liable for hate speech, instead of answering the questions, she accused journalists of trivialising the need for the law change.

And that appears to be the PM’s PR strategy: anyone asking awkward questions about the detail of her proposed hate speech law changes will be accused of wanting to deny protection to the victims of March 15th. That’s how questions that really need to be answered are being avoided.

Fortunately, some in the media are attempting to hold the PM – and her Minister of Justice – to account.

Newshub’s political editor Tova O’Brien wrote: “Jacinda Ardern is wrong about her own hate speech law. Completely and utterly wrong. Not only is the Prime Minister wrong about the basic facts of the proposal, she was wrong to shut down debate on hate speech on The AM Show with her glib, inaccurate dismissals. The Prime Minister and Ministers develop policy and set policy directions for law. If they don’t understand the policy direction and intent of the law, how can they expect the judiciary to interpret and apply the law?”

The Herald’s Audrey Young was equally critical: “Ardern does not understand the extent of what is proposed, as was evident by her comments on the AM show. In the five days since the Government outlined changes to ‘hate speech’ law, it has become obvious from comments by the Prime Minister, Jacinda Ardern, that she does not understand them. She and the minister in charge of the process, Kris Faafoi, need to up their game considerably if they want a fair debate.”

Under the current laws, New Zealanders’ right to free speech is enshrined in section 14 of the 1990 Bill of Rights Act: “Everyone has the right to freedom of expression, including the freedom to seek, receive, and impart information and opinions of any kind in any form.”

That freedom is limited by the 1993 Human Rights Act. Section 61 makes it a civil offence to express “threatening, abusive, or insulting” opinions that are likely “to excite hostility against or bring into contempt any group of persons… on the ground of colour, race, or ethnic or national origins.”

Under Section 131 using words which are ‘threatening, abusive, or insulting’ to intentionally incite hostility against a protected group is a criminal offence that can result in imprisonment of up to three months or a fine of up to $7,000.

However, as a public safeguard, criminal prosecutions need the approval of the Attorney-General. Setting the threshold for criminal prosecution so high means that the right to free expression can only be limited when there is the potential for significant detriment to society. That’s why there has only ever been one prosecution under the law. This fact, more than any other, shows why the proposed hate speech laws are so totally unnecessary in New Zealand.

Many other constraints on free speech also exist.

The Harmful Digital Communications Act covers complaints about texts, emails, social media, and website content, with offenders facing up to two years in prison or fines of up to $50,000.

Threats of physical violence or harm are covered by the Crimes Act. Section 307A stipulates that threats made against people or property that cause “significant disruption of the activities of the civilian population” are an offence with a penalty of up to seven years in prison.

While the Royal Commission recommended hate speech laws should be introduced to criminalise anyone deliberately inciting or stirring up ‘hatred’ against a group of people based on ‘protected’ characteristics such as race and religion, they also explained that such laws would not have prevented the terrorist attack. This directly contradicts the PM’s assertion that a law change is required because of the attack.

As political commentator Chris Trotter observed, the laws on our statute books are powerless against the meticulous planning and murderous intent of someone like Brenton Tarrant: “The state can punish Lone Wolves, but it cannot stop them. In attempting to minimise the terrorist threat, however, the state can eliminate our freedoms.”

And that’s precisely what Jacinda Ardern’s proposed hate speech laws will do.

The freedom of expression is the lifeblood of democracy and the cornerstone of a free and liberal society. It is also the bulwark against tyranny.

The Government’s plan to criminalise free speech will not make New Zealand a safer and more tolerant society. Instead, it will rob New Zealanders of the ability to engage in robust debate and say what they think.

According to the consultation document, it is proposed to transfer section 131 of the Human Rights Act into the Crimes Act. This will make it a criminal offence to use words which are ‘threatening, abusive, or insulting’ to intentionally ‘stir up’ ‘hatred’ towards a ‘protected’ group based on those 13 characteristics listed in the Human Rights Act – including ‘political opinion’.

The penalties for this new crime will be increased from the present $7,000 fine to $50,000, and from a maximum of three months in prison to three years – a harsher sentence than for assault, including against a child.

The wording of the section 61 civil offence in the Human Rights Act will be updated to match that of the new hate crime law, and a new civil offense will be created: in addition to the ‘incitement of hatred’, there will be a whole new offense – ‘incitement to discriminate’. This would make it unlawful to incite others to discriminate against members of protected groups.

In other words, by insinuating that the new hate speech laws would prevent tragedies such as the Christchurch shooting, a whole range of new and vindictive restrictions on our freedom of speech are being proposed for a country that has only ever had one criminal conviction for hate speech in almost 30 years.

“The people who risk being silenced under tougher ‘hate speech’ laws are not those who advocate violence and mayhem (which is a crime already), but those whose opinions and ideas are merely unfashionable or unpopular with the arbiters of ideological correctness. In other words, this proposed law change is not so much about preventing another atrocity as it is about controlling public debate and confining it within parameters that government ideologues regard as acceptable.

“So where do we go from here? It was always on the cards that ‘hate speech’ would be the defining issue of the Ardern government’s second term, and that could well turn out to be the case…

“It may be wishful thinking, but I suspect that faint tapping I keep hearing is the sound of nails being hammered into Labour’s coffin – and it seems to be getting louder.”

Instead of embracing liberty and tolerance, Labour plans to achieve a more socially cohesive society by stifling dissent through heavy-handed regulation that is reminiscent of regimes like North Korea.

What the Prime Minister doesn’t seem to understand is that threatening people so they are afraid to speak up will not create the socialist utopia she is planning for New Zealand. Instead, by imposing State control over free speech she is practicing totalitarianism.

In his prophetic novel Nineteen Eighty-Four, George Orwell warned, ‘If you control the language, you control the mind’. The very last thing New Zealand needs is the chilling effect of hate speech police stifling our thoughts and monitoring our every utterance.

Yet, if the law changes go ahead, the result will be that fewer Kiwis will openly speak their mind for fear the Police will come knocking on their door. It will indeed be an ominous day for New Zealand if the Police become the enforcement unit of ruling politicians and their activist allies against free citizens expressing contrary opinions.

If speech doesn’t encompass the right to say something that may be offensive, then it is not free. With so many constraints already existing to restrict speech which is deemed to be objectionable, there is no reasonable justification at all for introducing more punitive law changes. This unavoidably leads one to conclude that perhaps the real reason for doing so is to muzzle political dissent.

Please help spread the message about Labour’s plan to criminalise free speech and encourage everyone concerned to send in submissions. Governments regard silence from the public as support. If those who oppose these hate speech measures do not speak out, then the Government will be emboldened to press ahead with all they have planned.

But if the public speak out strongly enough against their draconian restrictions, Labour is likely to think twice before rushing into law changes that could risk alienating New Zealanders from all sides of the political spectrum.

Full details of the hate speech law changes can be found in the discussion document HERE – submissions can be emailed to: humanrights@justice.govt.nz

And details of the Ministry of Social Development’s discussion document on building a more cohesive society can be found HERE – submissions can be emailed to: social_cohesion@msd.govt.nz

*Do you believe the proposed hate speech laws are needed?