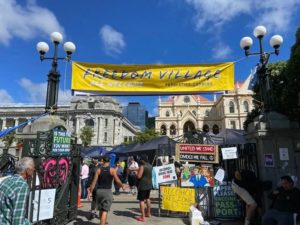 In her post Cabinet press conference of 11 October 2021, Prime Minister Jacinda Ardern explained, “Today, I will update you on… decisions made by Cabinet to strengthen our Covid response through the use of mandatory vaccination for large parts of the education and health workforce, in order to protect vulnerable New Zealanders…”

This announcement made a lie of the Prime Minister’s pre-election promise, that under her watch vaccination would not become compulsory.

Mandates were introduced through the Covid-19 Response (Vaccinations) Legislation Bill, passed under urgency on 23 November 2021. Not only was no Regulatory Impact Analysis carried out on the Bill, but the Ministry of Health’s disclosure statement reveals that no assessment was made on “the potential for any group of persons to suffer a substantial unavoidable loss of income or wealth” as a result of the law change.

The Attorney General’s review on whether the Bill is consistent with the New Zealand Bill of Rights Act, found that while there were breaches, they were in the “public interest” and were therefore considered “reasonably justified in terms of section 5 of that Act”.

While the Prime Minister gave the impression that mandates were needed to prevent the spread of Covid-19, that was not the case. Section 11AA clarified the mandates were being introduced to maintain ‘trust in the public service’ and ‘ensure the continuity of public services’.

Mandates forced people into taking a vaccine they did not want. They led to employees losing their jobs and homes. They divided society into the vaccinated and unvaccinated. It was ugly politics.

It should therefore have come as no surprise, that with tensions rising and the Canadian truckers’ protest all over the news, when a call went out in early February to support a ‘freedom convoy’ to Parliament, there was an enthusiastic response.

At 6.30 in the morning on Sunday 6 February 2022 two groups gathered for the journey to the capital – one at Cape Reinga in the north and the other at Bluff in the south.  By the time they arrived in Wellington on Tuesday February 8, numbers had swelled into the thousands. But as they gathered at Parliament to deliver their message to the Prime Minister to end the mandates, no-one would meet them. So they stayed – and the ‘Freedom Village’ was born.

At its height, some 12,000 people are said to have supported the protest. Many high-profile New Zealanders attended, including Sir Russell Coutts, Dame Tariana Turia, and former Deputy Prime Minister Winston Peters.

On February 25, Justice Cooke released his High Court ruling that the mandates imposed on the Police and the Armed Forces were unlawful. He found they not only breached the Bill of Rights, including section 11 – that “everyone has the right to refuse to undergo any medical treatment” – but their purpose was “to ensure the continuity of the public services, and to promote public confidence in those services, rather than to stop the spread of Covid-19.”

Justice Cooke revealed the Ministry of Health had opposed the mandates: “Indeed health advice provided to the government was that further mandates were not required to restrict the spread of Covid-19… Covid-19 clearly involves a threat to the continuity of police and NZDF services. But that threat exists for both vaccinated and unvaccinated staff. I am not satisfied that the order makes a material difference.”

The Judge’s exposé, which affirmed that Jacinda Ardern’s mandates were not only illegal but were effectively being used to coerce New Zealanders into complying with her vaccine strategy, should have marked a turning point in the occupation. The PM should have authorised a team to meet with the protest leaders to work out an acceptable resolution.

Instead, Jacinda Ardern took to her high horse, maligning and discrediting the protesters at every opportunity. Her actions again revealing the caring image, she is so keen to project, is just a façade.

Furthermore, by refusing to condemn her Transport Minister for calling the protesters a “river of filth”, or the Speaker for describing them as “the biggest collection of ferals that I’ve seen”, Jacinda Ardern had clearly learned nothing from the 2016 US Presidential Primary, when Hilary Clinton alienated voters with her conceited description of grassroot Americans as “deplorables”.

Fuelled by the arrogant and abusive comments from politicians, support for Parliament’s freedom protest continued to grow. A Horizon poll published on February 18 showed it rising to 30 percent – and over 44 percent amongst the 35 to 44 age group.

With over a million New Zealanders supporting the protest, claims by the political elite that only radical were involved, was shown to be a lie.

In fact, a survey released by The Platform on February 21 revealed that 55 percent of the protesters were women, 45 percent had voted for a Labour-Green Government in the 2020 election, and 27 percent were Maori.

When the Police finally descended on the protest in riot gear on March 2, they had, in their arsenal, shields, batons, tear gas, water hoses, fire extinguishers, and sponge bullets – along with a newly authorised and more powerful pepper spray, and two highly controversial and dangerous sound canons, which have been banned in other jurisdictions.

Former journalist Mike Butler described what actually happened on that day: “There was no violent disturbance by the crowd of protesters before the police descended in riot gear. The Police brought the riot. I’ve seen footage of protesters with their backs to police as they were being pushed out of the area. It was only later, after hours of harassment, that a bonfire was lit and pavers were thrown.”

It turned out that masked radicals, who had arrived that morning, created much of the mayhem. No-one knew where they came from. The Prime Minister, however, seized on their actions to vilify all of the protesters and dismiss their concerns.

And so it has gone on – Jacinda Ardern has doubled down, publicly denigrating anyone associated with the protest and labelling any critical assessment of her vaccine strategy as conspiracy theory.

The smearing is now being escalated to new heights – as this week’s NZCPR Guest Commentator, freelance journalist Graham Adams, explains:

“If you’ve ever wondered what a documentary made by a conspiracy theorist about conspiracy theorists would look like, Paula Penfold’s hour-long Fire and Fury [HERE] pretty much fits the bill. In a textbook example of a conspiracy theorist at work, senior Stuff journalist Paula Penfold promotes the idea that the anti-mandate protests at Parliament and suspicion toward Covid vaccines generally were being driven and harnessed by a small group of conspirators… They are also depicted collectively as a serious threat to democracy.

“To make her case, Penfold avoided examining the screamingly obvious reasons why so many people have subscribed to what she sees as fringe beliefs about vaccines as well as the deep dishonesty of the government. Perhaps if Penfold had shown the clip of Jacinda Ardern telling voters in September 2020 — shortly before the election — that there would be no penalty for refusing a vaccine, alongside her infamous interview in which she grinned as she agreed that she intended to create two classes of citizens, the vaxxed and the unvaxxed, the whole protest might have been put into better perspective.

“And, of course, Ardern also promised: ‘People who are vaccinated will still get Covid-19 — it just means that they won’t get sick and they won’t die.’ It’s not a statement that has aged well, given the numbers of the vaccinated who have ended up in hospital and the morgue.”

To add to the general outrage, Graham also points out that Stuff’s propaganda was funded by the $55 million Public Interest Journalism Fund, costing upwards of $200,000 in taxpayers’ money.

Meanwhile, the other side of the story, depicting what really happened at the protest, has been released by independent filmmakers – without taxpayer funding! Called River of Freedom, the documentary [HERE] tells the story of the convoy to Parliament and the protest, through the eyes of those involved.

Let’s be unequivocal about Stuff’s Fire and Fury. It’s a one-sided, biased depiction, designed, it appears, to poison the public against anyone associated with the protest.

It coincides with a more sinister campaign that also appears to be headed by Stuff – to track down and destroy the reputation of anyone even remotely associated with the protest, who might be standing for public office.

With local body elections underway, journalists are now hounding candidates and interrogating them about their connections with groups associated with the protest. Their aim is to discredit them. Their campaign has all the hallmarks of a Middle Ages witch-hunt.

While Stuff may think it’s acceptable for their journalists to harass and bully members of the public, it certainly is not acceptable behaviour in the UK, where newspaper editors are expected to adhere to an ‘Editor’s Code of Practice’, which protects the public against aggressive and intimidating journalists.

The Editor’s Code, which dates back to the early nineties, has been strengthened over the years – especially the provisions relating to media harassment following the tragic death of Diana, Princess of Wales. A more recent case, where a young television presenter committed suicide after being  relentlessly hounded by the media, again raised public awareness of the enormous power imbalance and danger associated with media bullying.

In the UK, any member of the public who feels they are being harassed and bullied by journalists, can lodge a complaint with the Independent Press Standards Organisation. The IPSO is the industry body, which regulates over 1,500 newspapers and magazines in the UK, not only holding them to account for high standards of journalism, but also ensuring members of the public are adequately protected from persecution by journalists.

Their Editor’s Code includes the requirement that “Journalists must not engage in intimidation, harassment or persistent pursuit”. If a complaint is received, the IPSO has the power to investigate and impose fines on publishers of up to £1 million. They not only operate a 24-hour anti-harassment helpline for anyone being victimised by journalists, but also a whistleblowing hotline for journalists “who feel they are being pressured to act in a way that is not in line with the Editors’ Code.”

The IPSO also advises that if a newspaper or magazine makes contact saying they intend publishing a story, which the ‘victim’ believes may breach the Editors’ Code, they should contact the IPSO for help and advice.

The closest organisation to the IPSO in New Zealand is the New Zealand Media Council. While this too is a self-regulating industry body set up to ensure high standards of journalism in New Zealand, their code of practice and principles do not specifically address bullying or harassment of the public by journalists.

Unlike most professional bodies, which operate some form of disciplinary procedure, shouldn’t there also be a process by which errant journalists can be held to account for their writing?

Given the disgraceful way some New Zealanders are being treated right now, surely it’s time the Media Council and its members acknowledged the problem. After all, it is in everyone’s interests that all players in the media act in a professional manner – especially if the industry is to rebuild and restore public trust.

*Should an ‘Editor’s Code of Practice’ be introduced in New Zealand to protect the public against media harassment and bullying?