Dr Kerry McDonald is an economist and businessman, who has held a number of high profile public and private sector roles including as Chairman of the Government’s 2011 Savings Working Group – for more information see kerrymcdonald.co.nz

Our Economic Disaster and the Tragedy of NZ’s Political Leadership

Based on a speech to Kapiti Coast Probus,  August 2020

Before Covid, the common mythology was that New Zealand had a strong, vibrant “Rock Star” economy, a high standard of living, strong capable political leaders, we were better than Australia and the envy of the World. However, the reality is quite different. New Zealand was in the top 3 OECD countries in 1960 but has been falling ever since. It now ranks in the thirties and has many serious/ intractable economic, social and environmental problems (1).

In 2003 a comprehensive study of the NZ economy concluded that “Compared to other OECD countries….NZ’s growth in Real GDP/Capita was slow”.

“NZ went from being one of the richest OECD countries…. to one of the poorest” (NZIER/Briggs, Looking at the Numbers).

So this paper is not a prediction of future problems but a documentation of what has already gone seriously wrong, over some decades and a why things will now only get worse. It is also a highly critical judgement on the incompetence and ineffectiveness of New Zealand’s political leadership over some decades. A web search will show many previous papers/speeches by me expressing increasing alarm about New Zealand’s deteriorating situation; the difference now is that I doubt the capacity of its political leaders to achieve any tangible improvement.

The fundamental cause of the problem is the lack of capable political leadership to implement the necessary policies, and politicians’ strong preference for the personal rewards of being in power ahead of improving National living standards.

The erosion of capability in the Public Service – the professional arm of government is also an important factor but this was also a political objective – the obligation to give “free and frank” advice was replaced by “no surprises” (Clark). And it has progressively lost its independence, capability, leadership and expertise. The SSC has been ineffective.

Critically governments increasingly avoid the difficult, complex “top of the cliff” policies – productivity, living standards, exports, population/immigration, work force etc and instead focus on “bottom of the cliff” wrecks. So improving household incomes is too tough but Working for Families (and Minimum/Living incomes) is a good political solution, papering over the cracks of policy failure. The difficulty is that the root cause problem is not dealt with, the consequences get worse and the cost of the band aids increase unproductive government spending. This is a downward spiral!

Immigration is a particular problem because population growth through large numbers of low economic value immigrants exacerbates many of the country’s most serious problems.

New Zealand’s values are also a serious challenge. Work by Webster and Perry (Massey University), in the context of the World Values Study concluded that:

The following graphs/data show the nature and extent of NZ’s problem:

Real GDP/capita is the critical indicator of capacity to improve incomes and living standards sustainably. Between 1960 and 2000 NZ’ performance was much worse than the OECD average and Australia’s. This is the core of NZ”s problem and fudge/political spin (Well Being!) is not a solution. 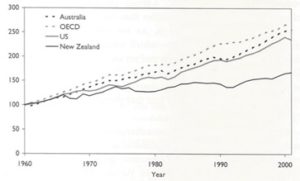 NZ’s labour productivity growth has been low, below Australia’s and the average of the top half of the OECD, so NZ’s lacks the capacity to match their  sustainable income increases. 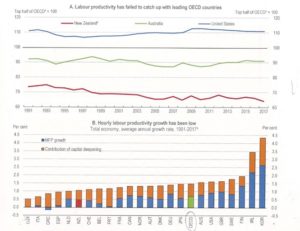 59% of NZ’s GDP growth was due to more people, 17% to people working longer hours and only 24% to higher productivity. This is a disaster – but demonstrates clearly why politicians focus on GDP, not GDP/capita and why they want higher immigration, regardless. More people means more spending on housing, infrastructure and consumption and more votes and party funds from grateful immigrants. But more people, done badly (low economic value) means lower living standards and exacerbates many of NZ’s serious problems. Immigration is just one of the BIG policy lies! 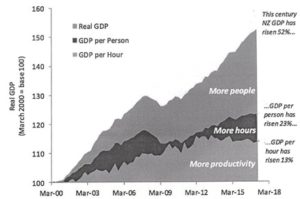 A strong export performance and growth in tradable goods (goods traded internationally) typically correlates with higher GDP/capita and living standards but NZ’s export performance has been weak for some decades, lagging behind Australia and the OECD average. 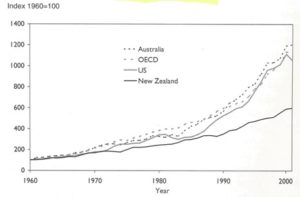 *Relative performance of the tradable and non-tradable sectors, including tourism 1999-2010 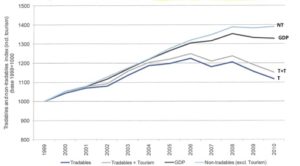 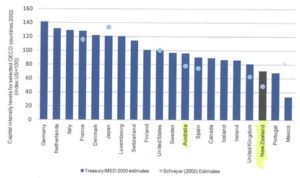 Over recent decades there has been a dramatic increase in the Government expenditure to GDP ratio, primarily due to a big increase (good politics!) in welfare payments. In the 1950s the ratio averaged about 20%. However it subsequently increased sharply to about 40% in 1980 and has been at or above that level since – currently at 40%. This big structural change in the economy is likely to have had a serious negative impact of productivity and living standards, given the big increase in welfare spending and the fall in the “Other” category , which includes some useful economic spending/investments. 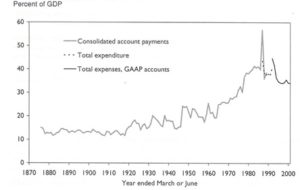 Finally, virtually all of the increase in Household Wealth since 1991 has not been due to savings and investment but to the revaluation of assets, a large part of which is due to rising house prices.

*Contributions to changes in net wealth 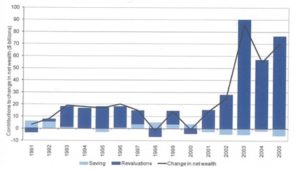 This is grim picture, one that has been sustained for decades for reasons outlined above, but politicians and governments have not acted effectively to improve the position, apart from Douglas and Bolger/Richardson. They continue to be highly paid and rewarded but their performance is clearly inadequate.

So what is to be done?

Well, the outlook is not good:

This looks to me like a continuing deadly downward spiral which will put the Social Contract at risk and turn dealing with Climate Change into a total train wreck.

I wrote to PM Key a decade ago proposing an enquiry on economic policy (polite rejection) and to PM Ardern some 2 years ago suggesting that the situation warranted a Royal Commission on Policy but the letter was not even acknowledged. Maybe now?