According to the Dominion Post, April 25, ” … the Government is setting up a welfare overhaul ‘expert advisory group’ supported by a secretariat of officials from different departments.” 1

Labour has promised the Greens an overhaul. The ghost of Metiria Turei hovers. Lest we forget, the ex Green co-leader  pleaded poverty as a sole parent student to vindicate fraudulent claims to WINZ. Her eventual replacement, Marama Davidson played rear-guard soon after Turei’s resignation (at a South Auckland rally attended by both) saying, “… the party would raise benefits by 20 percent – including student allowances and all core living payments – if elected.”2

“The agreement between Labour and the Greens … commits the Government to overhaul the welfare system with the aim of lifting families out of poverty and ensuring that ‘everyone has a standard of living … that enables them to live in dignity and participate in their communities’.”3

No kudos for originality here. This is exactly the sentiment expressed by the 1972 Royal Commission on Social Security. That commission gave us the DPB, which was followed by an explosion in unmarried births (but wasn’t enough for Turei to live on.)

Now in government, albeit with a muddled mandate, Labour has a long list of Pipers to pay beyond just the Greens: they are beneficiary advocates, unionists, academics, and even government agencies like the Office of the Children’s Commissioner, all of whom have sought benefit reforms along the following lines:

1. Expansion of the In Work Tax Credit (IWTC)

Since its inception, the IWTC (despite being a Clark/Cullen invention) has been loathed by the far Left. The IWTC is money paid to those who work and have children. It is not paid to those on benefits with children. The Left say this punishes the children of beneficiaries, that children are undeserving of such discrimination. The Left has no compunction in using children as hostages to demands for greater wealth redistribution regardless of the proven negative long term effects of growing up in unemployed families.

The Labour government may act quickly to make a similar tax credit available to beneficiary parents or pragmatically leave it to the Tax Working Group. The second option wouldn’t surprise given how unpopular this move will be among employed low-income Labour voters resentful of beneficiaries getting what they themselves have to work for.

2. Removal of penalty for not naming fathers

Governments have long sought to encourage beneficiary mothers to name the father of their child in order to recoup child support from him.  This includes financially penalizing mothers who refuse. The Pipers have deemed the penalty draconian and a breach of privacy rights; the need to identify fathers is unnecessary. The taxpayers can stump up his share of the mother’s benefit and the child’s paternal identity be damned. The abolition of this penalty is a certainty already signaled by the Minister for Social Development, Carmel Sepuloni.

(That the Clark/Cullen administration actually increased the penalty in their term shows just how far left Ardern’s government has swung.)

The move might appear quite unhinged to some (self included) but an interesting twist could occur.

There have been increasing calls for child support payments to be passed directly on to the custodial parent – usually the mother.  Currently these payments (for those children relying on a sole parent benefit) are kept by the state to offset the sole parent welfare bill.

This sets up an intriguing possibility. If 2 happens, and the custodial mother is no longer fined for not naming the father, what would then impel her to? The answer could be 3 – the direct receipt of his child support payment.

Regardless, if the child support pass-on goes ahead, the taxpayer will be up for another $2-300 million while the sole parent benefit gets even more financially attractive (in addition to the $60 weekly baby bonus to be introduced on July 1, 2018).

Contrary to popular belief, National did not introduce random drug-testing of beneficiaries. But WINZ can now require a beneficiary to apply for a job that requires drug-testing. If he or she fails, the test cost is deducted from their benefit. Benefits can be cut if further failure occurs. The Pipers think this is harsh. In the past a beneficiary could refuse to apply for a job that required drug-testing. And that’s how it should be, they say. Recreational drug use should not effectively be cause for cutting a benefit.

It is astonishing how far morality  has traveled since the days when the law clearly stated that benefit eligibility was voided if the beneficiary had caused his own incapacity to work (a rule undoubtedly instigated at the outset of social security under the Micky Savage Labour government).

Sanctions (cuts to benefits) are imposed for various unmet obligations, for instance, missing a WINZ appointment. The Pipers think this is especially mean. How can people be expected to attend interviews when they can’t afford public transport, or WINZ offices are too hard to access from rural areas? But that is tantamount to saying beneficiaries shouldn’t be held to the same standards as any other person. If they can’t get to a WINZ appointment how are they going turn up at work on a daily basis? Obligations are a fact of life. Exempting beneficiaries does them no favours. Again it was the old Clark Labour government that introduced sanctions. The new one wants to all but scrap them.

Maybe the Expert Advisory Group will reconsider stand downs – the length of time an individual must forego a benefit after a period of employment or other interruption – which act as disincentives to taking on employment. In the benefit system, one of the most perverse yet overarching barriers to work is the seductive security of a reliable weekly deposit to the bank account. People hesitate to give up even meagre benefit security for riskier work income. WINZ was recently forced to officially declare a labour shortage in the Nelson Tasman area. No, they hadn’t run out of beneficiaries to pick fruit. To the contrary. The declaration allowed an exemption for tourists to fill temporary roles that locals wouldn’t.

For a long time the Pipers have complained that pensioners enjoy the privilege of having their Super increased every April 1 by the rate of inflation and however much wages have risen by. Meanwhile beneficiaries ‘go backward’. Personally I don’t see a problem with a properly functioning benefit system – one used only as a last resort – being indexed across the board. But as it stands, an annual increase in the dole makes it too much like wages from work.

So those are some of the developments we might see.

Here’s what we won’t see:

A. Abolition of the sole parent support benefit. There is no reason to differentiate between job seekers and sole parents. Both need jobs. A stand-alone sole parent benefit merely legitimizes and encourages single parenting, the strongest correlate for child poverty.

B. Time-limits on unemployment benefits akin to many other overseas jurisdictions. Extensions are the exception rather than the rule.

C. A rethink of those chronic disincentives that keep people in a benefit trap, for example, income-related rents. A single older male living in a state house paying an income-related rent of $75 per week (yes, he exists) can’t afford to work because his elevated rent will soak up the increase in his income. He is trapped. We can scoff and say he has a moral imperative to work, but his response is economically rational.

D. A conversation about how accommodation supplements subsidize landlords and tax credits subsidize employers. These forms of assistance supposed to ‘help’ recipients actually distort markets to the detriment of the ‘client’.

On a more practical level, echoing calls for reform of the welfare system, Michael Barnett, Auckland Chamber of Commerce Chief Executive recently wrote, “Gaining access and a satisfactory response from Work and Income can be a daunting prospect. The agency’s systems are geared toward online applications and monitoring. This is of no benefit to Joe and others like him, who have no computer skills. Visit a Work and Income office and one passes through several layers of security and must make an appointment, which can be several weeks away, although in an emergency a space can usually be found within a few days. When one gets into the system there is no dedicated case manager, leaving no time to develop rapport with the individual seeking help.”4

I’ve witnessed the same with individuals seeking only ‘tide-over’ assistance. Refugees whose first language is not English struggle with the on-line system. That wouldn’t be a problem if the on-line system was merely an option. But in the cases I am aware of, it was a compulsory first stop. If that proves prohibitive, line up for an appointment in 2 or 3 weeks time. Similarly, for a newly released semi-literate prisoner with no income, on-line application is not an option.  We can scowl about having to support an ex-con but the cost of paying for his return to prison, denied a chance to find his feet, will be far higher.

Further, will the expert advisory group consider the very availability of welfare to refugees? Enthusiastic homage is paid to Aoteoroa’s ‘cultural values’  but the cultural values of refugees are neglected. Refugees frequently hail from countries where the family model is male-supported and male-headed. Unconditional, gender-neutral benefits can severely disrupt these families.   Giving money to the females in their own right is a recipe for conflict. Right or wrong, this presents a conundrum for the moral relativist Left.

For decades CYF has been under the gun for not putting children at the centre of all they do.

About WINZ, Prime Minister Jacinda Ardern is now making the same complaint:  “What we need to do is make sure that we have a service that really puts people at its centre.”

It doesn’t try to now?

How does MSD feel about the PM’s call of no-confidence?

Ardern continues, “We are coming in after nine years of there being an expectation that there be a singular focus on reducing benefit numbers and of course we want people in work, we want people who are seeking work to be able to find work, but I think it has tipped over into a space where it actually denying people who need help the help they need.” 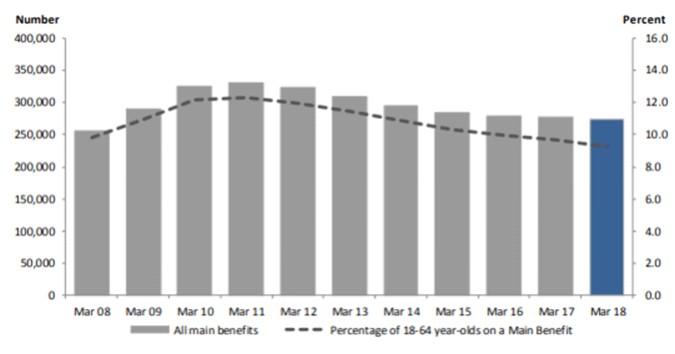 Blurring that focus and returning to policy settings which financially reward the very behaviours that aggravate long-term dependence doesn’t look smart. Helen Clark and Michael Cullen publicly advanced the view that the best way out of poverty was through work.

What are their successors telling us? That undoing old Labour policies like the In Work Tax Credit and a sanctions regime will advance the downward trend in the number of people dependent on welfare?

WINZ are dealing every day with a myriad of motivations; some good, some not. Sometimes they make mistakes. Yes, there are some operational problems outlined above but sorting those doesn’t require yet another comprehensive, extensive, legal overhaul. The likely changes I have outlined will almost certainly lead to the downward trend in beneficiary numbers reversing.

(Omission of reference to NZ First is not an oversight).