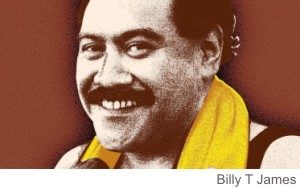 It is said, that free speech is a sign of a healthy democracy, but are people really free to speak their mind in New Zealand today?

At one time it was OK for someone to be offended by what others said. They were told to toughen up and get on with life.

In the eighties, our great Kiwi entertainer Billy T James, epitomised free speech: Rangi gets a job felling trees up North. At the end of his first day, the foreman comes to check on his work. Rangi has felled only one tree. ‘What the hell’s going on here, Rangi?’ Rangi says, ‘This bloody saw’s no good, boss.’ The boss says, ‘Here, give us a try.’ He starts up the chainsaw. Rangi looks startled. ‘What’s that noise, boss?’

It was of course, all intended to be good fun, but even Billy T was called a racist towards the end.

Parliament passed a law to protect free speech in 1990. Section 14 of the New Zealand Bill of Rights Act states, “Everyone has the right to freedom of expression, including the freedom to seek, receive and impart information and opinions of any kind and in any form”.

But in 1993, those rights were tempered by the introduction of the Human Rights Act. Section 61 restricts free speech by making it an offence to express ‘threatening, abusive, or insulting’ opinions likely to ‘excite hostility’ or ‘bring into contempt’ any group of persons on the grounds of ‘colour, race, or ethnic or national origins’

Under Section 131, anyone breaching the law by inciting hostility, ill-will, contempt, or ridicule, could face a criminal conviction: “Every person commits an offence and is liable on conviction to imprisonment for a term not exceeding 3 months or to a fine not exceeding $7,000”.

However, the Human Rights Commission makes it clear, that our right to free speech protects people making controversial or offensive remarks – unless they are inciting serious ethnic tension or unrest: “Only where there is the potential for significant detriment to society can the right to freedom of expression be limited”.

A further safeguard to free speech exists in the form of Section 132 of the Act, which requires the express approval of the Attorney-General before any prosecutions can proceed.

The Commission advises anyone taking offense at someone’s remarks to address their concerns to the publisher or broadcaster, as well as the Broadcasting Standards Authority, the Advertising Standards Authority, or the New Zealand Press Council. They also suggest “the best action is for people to take their concern to the person’s employer… Most have codes of conduct that do not tolerate racially offensive comments.”

So while our right to free speech is protected in law, these days speaking freely can have a significant social cost. That’s especially the case when the debate touches on such issues as gender and race, which have become a focus for politically correct activists promoting their cause and imposing their values onto others.

Anyone critical of their agenda is likely to be hounded and persecuted by the PC brigade – their objective is to intimidate and silence opposition, by making people afraid to speak their mind in case they get attacked. And these new age vigilantes can be found everywhere, but especially on social media, in the media, and in the Human Rights Commission.

Yet, expressing personal views, no matter how messy or clumsy, is the essence of free speech in a democratic society – and the very reason why it is protected in law. In robust debates, people can be undiplomatic or thoughtless about what they say and how they say it, but that’s OK. What’s not OK is to socially criminalise someone to deter others from speaking out.

We saw this all too clearly a couple of years ago when Kevin Roberts, the executive chairman of Saatchi & Saatchi, attracted a storm of protest from feminist groups for saying he didn’t believe there was a lack of gender diversity in the advertising industry.

Massey University Chancellor Chris Kelly suffered the same fate for explaining that a shortage of vets in rural areas was partly caused by women vets taking time off from their careers to raise a family.

In both cases, feminists twisted their comments, claiming they were sexist and insulting to women. That’s not what was intended in either case, yet both men were forced to resign.

This week’s NZCPR Guest Commentator, broadcaster and champion of free speech, Lindsay Perigo, believes that the battle for free speech in New Zealand has already been lost:

“The Fascists of the Left have won. Free speech in New Zealand is dead.

“Free speech’s strangulated status became obvious, if it were not already, when the National Business Review cravenly capitulated and removed Sir Bob Jones’ most recent column from its website. That was the column in which he proposed replacing Waitangi Day with Maori Gratitude Day: I have in mind a public holiday where Maoris bring us breakfast in bed or weed our gardens, wash and polish our cars and so on, out of gratitude for existing…

“A seemingly disparate development coincided with the Jones brouhaha. The High Court rejected an appeal by Louisa Wall, Labour MP for Manurewa, against an earlier finding by the Human Rights Tribunal that two cartoons by Al Nisbet, published by Fairfax, about a new taxpayer-funded Free Food for Schools programme were not in breach of Section 61 of the Human Rights Act.

“One of the cartoons depicted a group of dark-skinned adults, dressed as children, eating breakfast at school and saying, Psst . . . If we can get away with this, the more cash left for booze, smokes and pokies. The other showed a dark-skinned family sitting around a table littered with Lotto tickets, alcohol and cigarettes and saying, Free school food is great! Eases our poverty and puts something in you kids’ bellies.

“The High Court ruled that while the cartoons were undeniably insulting, they were not in breach of the law.”

But the High Court ruling had a sinister side in that it directed newspaper editors to ‘reflect’ on the publication of ‘objectively offensive’ material.

Lindsay Perigo believes this will result in the eventual ban of the publication of all such material.

We’ve seen this before.

After the Human Rights Commission announced in 2015, that they had begun monitoring newspapers for articles they perceived to be negative to Maori and therefore ‘racist’, there was an immediate drop off in any such stories.

It’s probably the reason why most New Zealanders are completely unaware that our entire coastline has been claimed by opportunistic Maori tribal groups – newspapers haven’t been reporting it.

That’s why we published all tribal applications to the High Court on our NZCPR.com website HERE – to enable the media and the public to see for themselves, what claimants are after. Some of the claims include the right to “take” dolphins, whales, seals and penguins, along with all species of fish, shellfish, and birdlife. Some are after sand, gravel and all other minerals. Many want their whole claimed areas declared wahi tapu in keep the public out.

All of this would undoubtedly be of great interest to newspaper readers, yet the fact that most editors have not reported it would suggest they are afraid of being called racists by the Human Rights Commission. They no doubt want to avoid the hassle and risks of responding to such accusations.

But in capitulating to the Human Rights Commission’s politically correct agenda, these editors are failing to uphold their crucial Fourth Estate public watchdog role, and as a result, are letting down the public and the principles of their profession.

Political correctness is now having a hugely detrimental impact on free speech in New Zealand. But it’s not just stories about race that are being suppressed.

When did you last see balance in articles on climate change in the media, explaining that while the Armageddon computer model predictions of climate scaremongerers are dire, real-life evidence shows that the climate is continuing to change within the bounds of natural variability?

And when did you last see a positive story about gender balance highlighting the fact that the pendulum has now swung too far against men? Look at teaching – the lack of male teachers in the profession is a national disgrace. Everyone knows that children need male role models – especially those growing up in homes without fathers. Yet just 12 percent of primary school teachers are male and only two percent in the early childhood education sector.

The response to this crisis by the Ministry of Education, where over 77 percent of employees are women, is pathetic. They claim they have been told by the Human Rights Commission that they cannot discriminate in favour of male teachers in their recruitment programmes – because men are not a disadvantaged group!

Surely the politicians pushing for gender equality in the State sector should now be weighing in and calling for more males in the education profession!

The anti-male bias, driven by feminists, is changing how people speak.

An on-line writing tool produced by Purdue University, demonstrates how students are being instructed against using language that could be ‘offensive’ to women. They suggest replacing words with “man” in them, such as ‘mailman’, with alternatives such as ‘mail carrier’, and they recommend using gender neutral pronouns such as ‘they’ and ‘their’, instead of the generic male pronouns ‘he’ and ‘his’.

In fact, pronouns have been the focus of a great deal of controversy in Canada. In 2016, “gender identity or expression” was incorporated into the Canadian Human Rights Act and Criminal Code, as prohibited grounds of discrimination. This required the pronouns ‘he’ and ‘she’ to be replaced by the gender neutral ‘they’ or any of the raft of new politically correct made up words, such as the ‘co’, ‘xie’ ‘ze’, and ‘ey’, that might be preferred by transgender people.

This federal law change was strongly opposed across Canada, including by Dr Jordan Peterson, a Professor of Psychology, formerly of Harvard University and now of Toronto University, who refused to use “preferred” pronouns: “I don’t recognize another person’s right to decide what words I’m going to use, especially when the words are non-standard elements of the English language and constructs of a small coterie of ideologically motivated people. I’m not willing to mouth words that I think have been created for ideological purposes.”

In standing up to this politically correct onslaught, Professor Peterson rose from relative obscurity to become a national and international hero, speaking out against the excessive regulation in the PC universe, saying “Enough is enough – I can’t stand it anymore!”

In his view, conceiving gender to be a social construct is akin to claiming the world is flat, and he adamantly opposes politically motivated legislation that attacks free speech and forces people to become ideological puppets.

While these sorts of politically correct excesses haven’t reached New Zealand as yet, vigilance is clearly needed as it may only be a matter of time before they do.

As a staunch defender of free speech, I will leave the last words to Professor Peterson: “People often defend freedom of speech on the grounds that citizens must retain the right to criticize their leaders. That’s true, but it’s not the fundamental truth. Freedom of speech protects our societies from nihilism and despair. Freedom of speech allows us to identify the problems that beset us, to formulate solutions, and to reach consensus on the solutions. There is nothing in the absence of freedom of speech but tyranny and slavery.”

Do you believe political correctness is undermining free speech in New Zealand?