Questions Over Our Future 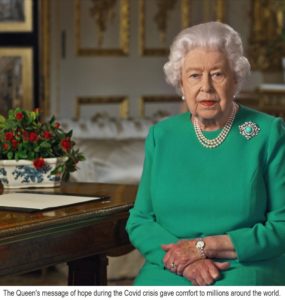 The outpouring of emotion over the death of Queen Elizabeth II came as a surprise to many. Hundreds of thousands of people lined the streets in Scotland and England in tribute, as they witnessed the magnificent pageantry of the meticulously planned transfer of Queen Elizabeth from her Balmoral sanctuary to her final resting place in Windsor Castle’s St George’s Chapel, next to her beloved husband, Prince Philip.

Over a quarter of a million people queued for up to 30 hours to pay their respects to the Queen as she lay in State in Westminster Hall. More than four billion watched her funeral, televised live around the world.

Her grace, humility, and dedication to public service, gave Queen Elizabeth an unprecedented aura of dignity and respect far greater than the Office itself.

Who can forget when the Queen made an unscheduled recording – for only the fifth time in her reign – to comfort and reassure people across the globe, who were trapped in the Covid nightmare, conveying hope for a better future:

“While we have faced challenges before, this one is different. This time we join with all nations across the globe in a common endeavour… We will succeed – and that success will belong to every one of us.

“But for now, I send my thanks and warmest good wishes to you all.”

That mantle of the Monarch has now passed seamlessly to King Charles III.

The Monarchy, with its roots in thousands of years of history and culture, has provided this country with a beachhead of steadfastness, anchoring our society with values that generations of New Zealanders held dear. But now, with the blessing of Prime Minister Jacinda Ardern, those foundations are being eroded by a new age of extremism.

Almost from the moment the Queen’s death was announced, opportunists proclaimed New Zealand needs to cut ties with Britain, reject the Monarchy, and become a Republic.

Even Members of Parliament condemned the Monarchy at the first opportunity – in spite of swearing an oath of allegiance to our Sovereign: “I, …, swear that I will be faithful and bear true allegiance to Her Majesty Queen Elizabeth the Second, Her heirs and successors, according to law. So help me God.”

During the special debate in Parliament honouring the Queen, Green Party co-leader Marama Davidson condemned the Monarchy’s “colonial and imperial agenda”, claiming, “We cannot ignore the oppression of Maori as very real and continuing”.

She also used the opportunity to reveal, “The work to decolonise and re-indigenise this land continues”, with a new constitution and a Maori justice system, identified as key parts of that strategy.

The Maori Party co-leader Rawiri Waititi claimed, “The British Empire and the power of its monarchy was built of stolen whenua, stolen resources, and stolen taonga.”

And Nanaia Mahuta used the opportunity to push her ‘partnership’ fabrication: “The Queen represented the embodiment of the Crown as partner reflected in the Treaty of Waitangi.”

This week’s NZCPR Guest Commentator is Treaty and Constitutional expert David Round, a former Law Lecturer at Canterbury University, who reminds us of the importance of the Monarchy and the danger of replacing it:

“There is one other enormous and overwhelming reason, why we must cling to King Charles. The reason is simply this ~ that if the monarchy were to be abolished, that abolition would undoubtedly be the pretext for introducing the ‘principles’ of the Treaty of Waitangi into our fundamental law. The principles, of course, are a blank cheque. The latest announcement from the Waitangi Tribunal is that they require ‘co-governance’ ~ in other words, an end to democracy and racial equality. That’s not what they meant even a few years ago ~ and for all we know, we may discover a few years down the track that the ‘principles’ require complete Maori control of our country. That is, after all, what some radicals are saying right now…

“And once we had the Treaty in our constitution, we would be sunk. No matter how mild the references to the Treaty might be, we can be certain that they would be used, not just by politicians but by politically activist judges in the courts, to impose apartheid on us for ever. Even without such a provision, our previous chief justice, the unlamented Sian Elias, raised the possibility that judges were entitled to ignore Acts of Parliament which did not comply with her own radical interpretation of Treaty principles, and there is no doubt that several decisions of the courts have already done just that.  But whatever we have in a constitution will be interpreted and applied by courts, and against the judgment of the highest of those courts there is no appeal. And even if a parliament far braver than today’s pack of racists, incompetents  and cowards were to say ‘No, that is not what we meant’, the judges would simply reply that parliament was breaching the constitution ~ was behaving unconstitutionally, and illegally ~ in saying that.  Even now, the law is not what parliament says, it is what judges say parliament says. Once we get a written constitution, a higher law which binds parliament itself, there will be no stopping judges as they interpret it as they please.”

Under our present constitutional arrangements, the ultimate law-making power rests in Parliament – and, through our elected representatives, voters. That has been our democratic strength as it continues to remind our law makers that they are answerable to the people.

Those calling for a new “written” constitution want to transfer that ultimate law-making power from voters, to unelected judges – who cannot be sacked.

If we want to preserve what little democracy we have left, any attempt to replace our present “unwritten” constitution, must be firmly rejected.

Right now, iwi leaders are scheming over how best to introduce a Treaty-based constitution without alarming the public. If we are to counter this grave threat to New Zealand, we must ensure other Kiwis become aware of the dangers a new constitution represents.

As David mentioned, the evidence of the Judge-made disaster that would await us, can already be seen – especially in the foreshore and seabed debacle.

Under British common law the ownership of New Zealand’s foreshore and seabed – which consists of 10 million hectares of the country’s richest natural resources, from the average spring high tide waterline to the 12 nautical mile Territorial Sea limit – was vested in the Crown. This was affirmed by a 1963 Court of Appeal ruling.

However, as the result of a marine farming dispute between tribal groups and a council, questions over customary rights escalated to the Court of Appeal. In 2003, activist Chief Justice Sian Elias ruled that pockets of customary interest in the foreshore and seabed might still exist, and that such claims should be heard in the Maori Land Court.

That ruling opened such a floodgate of claims to the coast that Prime Minister Helen Clark was forced to step in and legislate, cancelling hundreds of claims, and restoring Crown ownership through the 2004 Foreshore and Seabed Act. While the new law enabled tribal groups to claim customary interests in the High Court, there were on-going complaints that the bar was set too high for claims to succeed.

The Maori Party campaigned for a law change, and once in coalition with John Key’s National Government, the Marine and Coastal Area Act was introduced in 2011 to repeal Crown ownership and open the area for tribal claims.

The tests were stringent. To gain a Customary Marine Title applicants had to satisfy section 58 of the Act: they not only had to “hold the specified area in accordance with tikanga” – where ‘tikanga’ was defined as “Maori customary values and practices” – but they also had to have “exclusively used and occupied the area without substantial interruption from 1840 to the present day.”

This common law requirement was included to ensure claimants met stringent property rights tests, that would restrict customary title to minor pockets of the coast.

Overlapping claims, which are inconsistent with the concept of ‘exclusive’ use and occupation, were expected to be ruled out, as were claims for areas where third-party use resulted in substantial interruptions. Since tribal groups had limited ability to navigate far from shore in 1840, it was also expected that few Territorial Sea claims would succeed.

The new law, which specified two pathways for claimants – a hearing in the High Court or direct negotiation with the Minister of Treaty Settlements – provided funding for applicants of up to $458,000, but nothing for opponents.

On the eve of the seven-year deadline for lodging claims, almost 600 overlapping applications flooded in – some 200 for the High Court, and 387 for Crown Engagement.

As a result, the NZCPR raised funding for a voluntary community group, the Landowners Coalition, to oppose the claims in the public interest. Their focus on the first High Court case – the Edwards claim for a 44 km stretch of the Bay of Plenty coastline around Opotiki – was based on the hope that a sensible decision would have a precedent effect on all other claims.

However, in his bombshell ruling, Justice Churchman found in favour of the claimants. By elevating the status of ‘tikanga’ above the common law section 58 requirements in the Act, ‘tikanga’ became the “critical focus”, overriding “western property concepts.”

That decision means that almost nothing can prevent customary title being awarded to Maori claimants – as long as they can show they have held their own area according to their own ‘tikanga’.

Furthermore, that critical ‘tikanga’ assessment was not even determined by the High Court Judge, but by Maori advisors appointed by the Court in agreement with claimants!

Ignoring concerns that ‘overlapping’ claims breached the ‘exclusive use and occupation’ test in the law, Justice Churchman created a new concept of “shared exclusivity” to ensure that few claimant groups would go away empty-handed.

Despite being contrary to what Parliament intended, the Churchman decision now stands as a precedent and if not overturned on appeal, Maori tribal interests are likely to gain title and control of New Zealand’s entire coastline and Territorial Sea.

With claimant groups having access to taxpayer funding for appeals, while other groups do not, the NZCPR again raised the funding to appeal the Churchman decision to the Court of Appeal. A number of claimant groups are also appealing the decision, but most are arguing over the spoils – who got what.

This case shows exactly how activist judges can create new laws that are contrary to Parliament’s intentions.

Since transferring the entire coast to Maori interests was not National’s stated intention, they have an obligation to New Zealanders to put it right.

National should pledge to repeal the Marine and Coastal Area Act, cancel the claims, and return the coast to Crown ownership.

The point is that this disastrous outcome, caused by Judges taking the law into their own hands and re-writing what Parliament intended, has occurred under our current constitutional arrangements. At least now, MPs are able to repeal Judge-made law and replace it with laws that voters want.

Imagine just how much worse it would be if Judges held the ultimate law-making power through a new constitution.

Worse, with Maori supremacists determined to enshrine the Treaty of Waitangi in any new constitution, New Zealand would be turned into an apartheid society, where race would determine whether we are part of a privileged ruling class or are relegated to second-class status.

Anyone pressing for constitutional change in this political climate, no matter what their intentions, would be opening up the country to capture by separatists. There are no two ways about it – a new constitution would lead to Judge-led tribal rule.

*Do you support the introduction of a new written constitution for New Zealand?