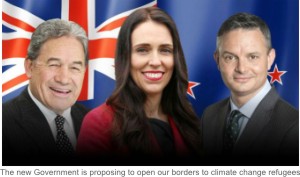 Over recent weeks the plight of Manus Island refugees and the Prime Minister’s offer to take 150 of them has been dominating the news. The media’s obsession with the refugee issue is reminiscent of their incessant promotion of Jacinda Ardern’s Labour Party in the run up to the election.

It has only been since the Australian media released details from the Papua New Guinea authorities outlining how the Manus Island detainees regularly travel into town to allegedly have sex with underage girls – some as young as 10 – and buy and sell drugs, that some balance has finally entered the news coverage.

Given the interest of the New Zealand media in this issue, quite why they didn’t find and publish this information – which was reported to the Australian Government in mid-October – is not clear. The 161 offences the detainees are alleged to have committed include sexual assault, assault and aggressive behaviour.

If our media had been doing their job, they would have provided New Zealanders with balanced reporting from the outset. That would have indicated there are serious problems in taking these men.

What was also not reported by our media was the fact that under normal circumstances, every asylum seeker has access to accommodation, utilities, food, and a fortnightly allowance. They are free to visit nearby villages to shop, to go to the beach and to mix with locals. In addition, they are able to apply for permanent resettlement in PNG at any time.

Australia’s position on this matter in understandable. The Australian Government has always refused New Zealand’s offers to take boat refugees for the very good reason that we could be used as a backdoor route into that country – unless visas are re-introduced for Trans-Tasman travel. The concern is that if any of the refugees did end up in Australia, it could trigger a resumption of the disastrous people smuggling trade that led to the deaths of over 1,200 asylum seekers before the hard-line approach was adopted.

Australia now has a strict policy of turning back asylum seekers’ boats in order to discourage them from even trying to reach Australia. Not only that, but any asylum seekers, who do manage to arrive by boat, are banned from ever being settled in Australia. Instead they are held in detention camps on Nauru and Papua New Guinea, from where any genuine refugees are given the option of being resettled, but not in Australia. Alternatively, they can opt to be returned to their home country.

Our Prime Minister should stop meddling in Australian affairs. An offer has been made and that’s where it should lie. And the media should provide balanced reporting, not try to exert influence through PR campaigns masquerading as news.

Biased media reporting is also a concern of this week’s NZCPR Guest Commentator, Barry Brill, a former Cabinet Minister and the Chairman of the New Zealand Climate Science Coalition, who has raised concerns about the recent escalation of global warming propaganda by the media:

“In November every year, most of our mainstream media subject us all to saturation coverage of the evils of ‘climate change’ (by which they mean dangerous anthropogenic global warming).

“This is no coincidence. At this time of year, the United Nations Framework Convention on Climate Change holds its annual ‘Conference of the Parties’, which is attended by large delegations from every government in the world, along with tens of thousands of acolytes. This year, COP 23 was hosted and chaired by Fiji, but was held in Bonn, Germany.

“But the annual media splurge is not about the COP itself. It comes before-hand, and is a softening-up-the-public process meant to assure the delegates that we are all cheering them on. It’s quite like sending an army battalion off to a popular war.”

Barry speculates at the origins of this global PR campaign: “It is obviously choreographed. All media know when and how to begin campaigning, and all sing from the same hymn sheets.  Somebody – Fenton Communications in New York (?) – wields the conductor’s baton and the world’s media devotees reliably deliver the goods. Rampant ‘noble cause corruption’ is in the driver’s seat, and tribal solidarity rules. Media boards/owners know better that to get in the way.”

The climate series on TV One’s news bulletins earlier this month was so unbalanced in the opinion of the New Zealand Climate Science Coalition that they have lodged a formal complaint to the Broadcasting Standards Authority.

At the time, the village elders had become concerned at the continual erosion of the foreshore, the widening of the river’s mouth, and the salinisation of the soil as surges swept seawater through their fields during king tides. The problems became so acute that they began discussing the relocation of the village to another site, but back then no money was available for such a project.

A detailed scientific analysis of sea level rise in Fiji has recently been published by Professor Nils-Axel Mörner of Stockholm University – the Leader of the Fiji New Sea Level Project. He found that the sea level has remained virtually the same over the last 200 years, and perfectly stable over the last 50-70 years.

He explains that the critical depth for coral growth is 40 cm below the low-tide-level. If sea levels are not rising, corals are forced to grow laterally. Radiocarbon dating studies at several different sites in Fiji show that the corals have stopped growing vertically, and have been forced to grow laterally in the micro-atolls, indicating that the sea levels have not been rising.

It’s a similar story in Tuvalu, where claims about rising tides caused by global warming inundating the islands have been discredited. In 2008, Professor Chris de Freitas of Auckland University explained that historical records show no acceleration in sea level rise in the 20th and 21st centuries.

He outlined how instrumentation was installed in 1993 on Tuvalu’s main island Funafuti, and that the sea level had shown no discernible trend. While some inundation was evident on the islands, the cause was found to be erosion, sand mining and construction projects that had caused an inflow of sea water – not global warming.

Other factors that were contributing to the problem included the excessive use of freshwater for irrigation, which was causing the destruction of underground freshwater reservoirs leading to seawater encroachment into vegetable growing pits. The excessive paving of roads and the airport runway had exacerbated the problem. With around a quarter of the island now paved, rainwater is increasingly unable to soak into the ground to replenish groundwater supplies, and instead runs off in such a way that when combined with high tides, the flooding along the coast looks like sea levels are rising.

Over the years, overstayers from Tuvalu and other Pacific Islands have used climate change to plead to New Zealand authorities for refugee status in order to avoid deportation.

The problem is that to qualify for refugee status, an asylum-seeker must be able to point to persecution on one of five grounds – race, religion, nationality, membership of a particular social group, or political opinion – and the Courts have generally determined that climate change is unlikely to cause harm.

However, all that might be about to change as our new Government considers promoting New Zealand as the world’s first safe haven for “climate refugees”.

The Minister of Climate Change, Green Party leader James Shaw, says that because refugee conventions don’t recognise climate change ‘victims’, he’s looking at a possible new visa category for people displaced by climate change: “There might be a new, an experimental humanitarian visa category for people from the Pacific who are displaced by rising seas stemming from climate change, and it is a piece of work that we intend to do in partnership with the Pacific Islands.”

Prime Minister Jacinda Ardern confirmed the new direction, saying that New Zealand should be prepared to take in “climate change refugees” from surrounding island nations: “We’re looking to ways to build in the responsibility we have on climate change and the way that we approach, potentially, climate change refuges in the future amongst our neighbours”.

New Zealand already has long-established migration arrangements with many Pacific Islands. Cook Islanders and Niueans have enjoyed freedom of entry since 1901, and Tokelauans from 1916. Since 2002, the Samoan quota for residence has been set at 1,100 a year, and each year a further 650 Pacific Islanders will be accepted for residence – 75 from Kiribati, 75 from Tuvalu, 250 from Tonga, and 250 from Fiji.

New Zealand is also one of 26 countries that take part in the United Nations High Commissioner for Refugees (UNHCR) resettlement programme, taking 750 refugees a year. Over the years more than 33,000 refugees have been resettled in New Zealand. In 2015 the Government announced 750 refugees from Syria would also be accepted, with 600 as a special intake above the quota, and 150 within the quota.

Refugees who arrive in New Zealand have been carefully screened, including for credibility, security, immigration risk, and health status. Their first six weeks are spent at the Mangere Refugee Resettlement Centre, where they undertake an orientation programme. They are then settled in six regions throughout the country – Auckland, Waikato, Manawatu, Wellington, Nelson and Dunedin – where furnished housing is provided along with intensive community support.

As well as outlining his plan for climate refugees at the COP23 conference in Germany, the Minister of Climate Change delivered New Zealand’s national statement. Explaining that we had led the world in giving women the vote and becoming nuclear-free, he then told the conference that we are now becoming a world leader on climate change.

Certainly, with cows and sheep responsible for almost half of all of the country’s greenhouse gas emissions, once agriculture is brought into the Emissions Trading Scheme, New Zealand will indeed lead the world as the only country with a Government that is foolish enough to penalise the food production sector.

The Greens’ coalition agreement with Labour includes a Zero Carbon Act to enshrine their ludicrous goal of zero net carbon emissions by 2050 into law, a requirement for a climate impact analysis to accompany all new legislation, and the establishment of a Climate Commission to determine how New Zealand will meet its Paris climate change commitments.

In part, the zero emissions target will be met through the “carbon sink” created by the Government’s plan to plant 100 million trees a year for ten years.

This was a policy that New Zealand First campaigned on, albeit from a regional development perspective. It is part of their coalition agreement with Labour: “Planting 100 million trees per year in a Billion Trees Planting Programme”.

However, just weeks into the new term of the Government, Labour is now back-tracking on that commitment.

Prime Minister Jacinda Ardern now claims it was always going to be in partnership with the private sector!

She says, “The 1 billion goal is not something that is going to be pursued in isolation from the industry. If we work together, if they continue with their 50 million a year over 10 years and we continue with 50 million a year over 10 years, you get to a billion… We’ve always been really clear. Overall our goal is a billion trees being planted. It would be splitting hairs trying to decipher whether or not that tree was solely Government or solely private sector…  this is a collaborative approach.”

What is very clear is that the Government is reneging on its promise to plant 100 million trees a year. How many other campaign promises are going to be broken? And why is the media turning a blind eye?

Should New Zealand open its doors to “climate change” refugees?