Return the Coast to Public Ownership 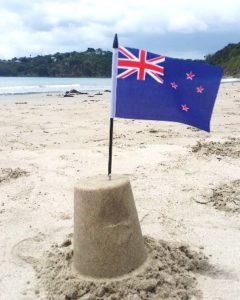 “Cletus Maanu Paul, on behalf of all Maori, has applied for recognition of customary marine title and protected customary rights over the entire area of Aotearoa New Zealand, including all islands to the outer limits of the territorial sea; and, the Marine and Coastal Area surrounding all islands and reefs lying off shore from the coastline to a distance of 12 nautical miles; and, the entire foreshore and territorial waters of New Zealand under the Marine and Coastal Area Act 2011”.

That was one of the 200 newspaper advertisements notifying that claims for the coast had been lodged in the High Court under the National Government’s Marine and Coastal Area Act. Most were filed just days ahead of last year’s six-year April 3rd deadline. A further 380 applications were lodged with the Minister of Treaty Negotiations for secret deals through the separate Crown engagement process.

Since, to succeed under the law, claimants have to show that they have used the claimed area ‘exclusively’ since 1840, the ‘whole of New Zealand’ application was clearly grandstanding by Maori sovereignty supporters. The fact that it wasn’t thrown out, and that instead, the claimants are now receiving hundreds of thousands of dollars of taxpayer funding to prepare their case, demonstrates not only how badly misled New Zealanders were about the claims process, but that the law itself is fundamentally flawed and should be thrown out!

Let’s look at how we got to this situation.

However, in 2003, the Court of Appeal’s activist Chief Justice overturned that ruling, to find that customary title in the foreshore and seabed might exist, and that such rights should be tested in the Maori Land Court. This highly controversial decision set the scene for the privatisation of the coast to Maori, forcing the Labour Government to legislate to re-affirm Crown ownership through their 2004 Foreshore and Seabed Act.

When National was elected to Government in 2008, the Maori Party agreed to join their coalition on condition that Labour’s Foreshore and Seabed Act was repealed. Since National had not campaigned on such a law change, then Prime Minister John Key went to some lengths to reassure the public. He launched a review, saying a law change would only go ahead if there was widespread public support. But in spite of 91 percent of submissions opposing their change, National pressed ahead anyway.

Attorney General, Christopher Finlayson, justified their actions by claiming Labour had extinguished 164 years of Maori customary title when they passed their 2004 Foreshore and Seabed Act.

But Canterbury University Treaty expert and law lecturer David Round disagreed: “It is completely untrue that the law of New Zealand recognised these rights for 164 years. The Ninety Mile Beach Case in 1963 held that these rights no longer existed, and that case came to that decision on the basis of the Harbours Act 1878 and the common sense idea – repeated by one of the 2003 judges, J. Gault – that once the Maori Land Court had decided on title to dry land, that was an end of its jurisdiction, and there could be no other Maori owners to the foreshore.”

New Zealanders were led to believe that the “customary title” introduced in the new law was an ancient right that had always existed, when instead, it was a new property right created for the Maori Party – to enable their supporters to control the coast.

As David Round explained, “Only since 2003 has the ‘common law right’ Finlayson speaks of existed in our law. It was remade then by the judges. But even that Court of Appeal made it clear that it would only be in rare and remote cases that a Maori claimant would be successful.”

An iwi spokesman outlined the situation to Radio NZ: “Until now there’s never ever been such things as customary title and from our point of view it’s a new one for New Zealand legislation and in so many ways it’s been untried and untested. We know lots about customary interest about how they’ve been expressed in the past but never before has the state gone outside the Westminster paradigm to create a new form of title. So for us it’s a new territory and I’m sure it is for the government as well and we have to really feel our way into it.”

Chris Finlayson went even further down the appeasement path by including ‘tikanga’ – defined as “Maori customary values and practices” – in the law’s main statutory test: Section 58 states, “Customary marine title exists in a specified area of the common marine and coastal area if the applicant group holds the specified area in accordance with tikanga; and has exclusively used and occupied it from 1840 to the present day without substantial interruption.”

David Round explained that because of its varied meaning ‘tikanga’ should never have been included in the law, and warned, “that ‘tikanga’ will actually say that Maori still own a part of the foreshore and seabed even if other people visit it!”

Indeed, that’s exactly what has happened. In the only Crown Engagement case to have been finalised under the new law, Ngati Pahauwera successfully claimed that they had held an area of Hawke’s Bay coastline between Napier and Gisborne – that had been used as a public road for over 100 years – exclusively and continuously since 1840 in accordance with tikanga.

Minister Chris Finlayson, in granting the Customary Marine Title, was clearly swayed by the reference to ‘tikanga’ – as he explained in a letter to the iwi: “The submissions received do not demonstrate intensive third party use of the application area, and Ngati Pahauwera evidence asserts that third parties are not excluded provided they abide by Ngati Pahauwera tikanga. Contemporary third party activities that take place in the CMCA (common marine and coastal area) in the Ngati Pahauwera application area include surfcasting, surfing and offshore fishing and recreational boating using boats launched outside of the application area. Historically, the CMCA has been used for commercial navigation including the landing of goods and people, travel along the foreshore between Napier and Wairoa and small scale gravel and shingle extraction.”

He continued, “I am satisfied that the combined historical and contemporary third party activities are not of sufficient intensity and scale to amount to a substantial interruption of any exclusive use and occupation that Ngati Pahauwera are able to establish. These activities often take place in small, confined parts of the CMCA and do not, of themselves, interrupt use and occupation by the applicant group.”

What’s clear from the Minister’s decision is that by referring to tikanga the claimants were able to satisfy the statutory test of ‘exclusive’ use and occupation – even though the area had been continually used by many other people – because the claimants’ own use of the area had not been interrupted.

If the Judges hearing the High Court claims take a similar view then it is likely that virtually the whole coast will pass into tribal hands.

Looking back, New Zealanders were essentially duped by the National Government into believing that the statutory tests in the new law were so onerous that few claims would succeed.

It now appears they were badly misled.

But there is more bad news.

While he then went on to explain that he will act as an interested party in each claim to ensure that the statutory tests are met, it seems there is no guarantee that the claims will be opposed.

With tens of millions of dollars of taxpayers’ funding filling the legal war chests of claimants, and without a guarantee that our elected Government will defend the public interest in the coast, there is an increasing chance that even spurious claims will succeed.

Furthermore, while the public may have been reassured by the fact that since all of the claims overlap, they would fail the ‘exclusive’ use and occupation test, this too may have been premature. Claimants are being asked to resolve the boundary issues ‘according to tikanga’, so that by the time their claims progress to a hearing, they will no longer overlap.

As a result, claimants are now busy carving up the coast between themselves ahead of advancing their exclusive use arguments. Many tribal groups believe it is only a matter of time before the coast is theirs.

This week’s NZCPR Guest Commentator, Professor Barend Vlaardingerbroek of the American University of Beirut, and formerly, Otago University, provides a broader picture of the danger to nation-states of separatism – or ‘micronationalism’ as he calls it. He warns that New Zealand needs “to stop the slide to political immaturity through the encouragement of micronationalism. The ‘great leap backwards’ that this represents needs to be checked or we will be wiping out the democratic gains of the past two centuries.”

Barend is right – if National had stood up for equal rights and rejected the Maori Party’s separatist law, New Zealanders’ democratic rights to the coast would not be under threat from tribalism.

To be charitable, one can speculate that National too was duped over the law change. They seemed to genuinely believe that no more than 10 percent of the coast would be claimed and it is said they were as shocked as the rest of New Zealand when 600 claims were lodged on the eve of the deadline.

So there we have it. In spite of assurances given by the National Government that under their new law, there would only be claims for remote areas of the coast, that would not impact on most Kiwis, it now appears increasingly likely that New Zealand’s entire coastline could end up under tribal control.

Bizarrely, this is not unlike the situation the Labour Government faced in 2003, when tribal groups were claiming the whole coastline, and the ownership of this strategically crucial part of New Zealand was in the hands of a Judge. Their response was to legislate in favour of Crown ownership. We need them to do the same again.

The situation, as it stands, is not what Parliament intended when the law was changed. Nor is it what was sold to the New Zealand public.

Parliament needs to fix this problem before the troubles begin and belligerent tribal groups – exercising their ‘rights’ to the coast – drive the public away, demand extortionate payments from commercial operators, and begin exploiting the minerals and natural resource wealth in their claimed areas.

With the first High Court claim set down for a hearing next June, and Crown Engagement claims still some months away, there is a window of opportunity for a law change.

We need every New Zealander who cares about the future to join the call for the coast to be returned to public ownership. Tell everyone you know and ask them to help too.

As a first step, three letters need to be sent to Parliament.

The first to the Prime Minister saying that since the failure of National’s law could lead to much of our coast ending up in tribal hands, the Government needs to rescue the situation by restoring Crown ownership.

The second to the leader of the Opposition saying that since claimants have abused the law and the public is in danger of losing the coast to tribal control, National needs to step up and put it right by calling for the repeal of their Marine and Coastal Area Act.

And a third to Winston Peters, who has always opposed racial privilege, calling for him to take a lead in repealing the law, extinguishing the claims, and restoring public ownership of the coastal marine area for every New Zealander.

Further details on the claims process can be found on the NZCPR website at NZCPR.com/claims

Should New Zealand’s coast be returned to public ownership?