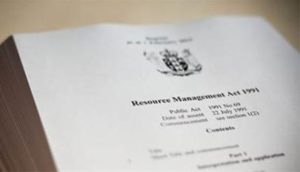 The Resource Management Act is one of New Zealand’s worst performing pieces of legislation. It has become a major barrier to progress by adding costs and delays to the local authority consenting process. It has also been identified as a significant contributor to the country’s housing crisis.

Drafted by former Labour Prime Minister Geoffrey Palmer in the late 1980s as enabling legislation to replace the prescriptive Town and Country Planning Act, it was passed into law by Jim Bolger’s National Government in 1991.

During the intervening years, the RMA has undergone upwards of 20 major amendments and has been expanded to almost 1,000 pages.

Almost everyone, except radical environmentalists, accept the RMA needs to be reined in – and every Government in recent history has campaigned on promises to ‘fix’ the RMA.

The last National Government planned sweeping reforms but couldn’t persuade their United Future and ACT coalition partners to support their proposals. In the end, they did a deal with the Maori Party and as a result, along with sensible changes, new race-based provisions giving  iwi greater influence in council decision-making were also introduced that have made the problems with the RMA even worse.

In 2017, the Labour Party also campaigned on fixing the RMA, and last week passed their Resource Management Act Amendment Bill into law. Environment Minister David Parker claimed it was a significant step forward in improving resource management and consenting in New Zealand.

The new law is indeed a significant step – but backwards not forwards!

The Minister failed to mention that the passing of his Bill represents a serious abuse of democracy and the Parliamentary process.

Last July during Parliament’s Question Time, Green MP Gareth Hughes asked Minister Parker whether he supported removing the ban that prevents local authorities from taking climate change into account when considering resource consent applications from the RMA during this term of Parliament.

The Minister replied with a categorical “No”.

These provisions prevented local authorities from declining a consent to, say, build a petrol station or expand a coal mine on the basis that they would be promoting the use of fossil fuels.

When David Parker tabled his RMA Amendment Bill in Parliament just two months after that Question Time exchange with Gareth Hughes, it contained no reference to climate change. When it went out for submissions, there was therefore no reason for members of the public to mention sections 70A or 104E as there were no proposals to change them.

Despite this the Environment Select Committee received hundreds of submissions ‘from the public’ calling for the repeal of sections 70A and 104E. It is implausible to suggest these submissions were anything but orchestrated by the Green Party mobilising their support base.

The advice to the Select Committee from the Ministry for the Environment indicated that these engineered submissions had a big influence on their recommendation to repeal sections 70A and 104E: “In response to submissions… repeal sections 70A, 104E of the RMA… to remove statutory barriers to climate change consideration in RMA.”

The submissions also influenced Select Committee members since their report stated: “A significant number of submissions raised the matter of climate change, and how the RMA interacts with climate change policy… we recommend repealing sections 70A and 104E of the RMA.”

In other words, the Ministry and the Select Committee accepted these submissions at face value and claimed to have been so influenced by them that they made a major change to the legislation. In doing so they have denied Kiwis their democratic right to have a say on this crucial matter. It represents a gross abuse of the Parliamentary process and shameful behaviour by the Ministry and the Committee – a majority of whom are Government MPs: three Labour, one Green, one New Zealand First and four National.

New Zealand First could have stopped this legislation – or at least had it referred back for a further round of consultation. But it didn’t.

A matter as important as this should have had full public scrutiny so that the voices of those opposing the repeal of sections 70A and 104E could have been heard by the decision-makers as well.

The National Party spokesman on the RMA Judith Collins expressed it in this way: “A recently-released report by the Environment Select Committee recommends several changes to the Resource Management Amendment Bill, including provisions for climate change considerations in RMA decisions. These late changes are an abuse of the select committee process because they were made after public feedback was called for, meaning submitters have not had the opportunity to properly consider the new bill. The climate change considerations were not in the original bill, and it appears only some of the people who submitted were aware of them.”

She also made the point that while the Environment Minister David Parker claimed he was working on ways to improve the speed and certainty of consenting, with councils able to consider climate change in their consenting decisions “This bill will have the opposite effect.”

Once the Bill was passed by Parliament, the Green Party co-leader James Shaw claimed the repeal of the sections 70A and 104E ban was a major policy victory: “The green movement has been trying to get this fixed for 15 years… In my view, this is one of the most significant policy changes to address climate change that we have done this term”.

But his claims that the policy will ‘address’ climate change are inaccurate.

Firstly, while the new law does indeed remove sections 70A and 104E from the RMA, there is a caveat. The changes will not come into force until 31 December 2021, in order to align the RMA with the Zero Carbon Act and to ensure that the change coincides with the gazetting of the first emissions reduction plans under the ZCA.

And secondly, since the Government amended the Emissions Trading Scheme to introduce a cap on New Zealand emissions last month, any decisions made by councils to reject proposals that they believe could increase New Zealand emissions – such as building a service station – will, in fact, have no impact on the country’s total emissions. All it would do, is deny local communities the convenience and employment opportunities that such a business would bring.

This week’s NZCPR Guest Commentator Dr Eric Crampton, Chief Economist at the New Zealand Initiative,  explains that since the ETS now has a binding emissions cap for the whole county, while the RMA law change will do nothing to reduce carbon emissions, it will impact on costs:

“Last week, Parliament repealed Section 104E of the Resource Management Act. The section prohibited councils from considering the climate change effects of their consenting decisions. But because the measure follows the Zero Carbon Act placing a binding cap on emissions in the Emissions Trading Scheme… every tonne of carbon not emitted is a tonne of carbon available for someone else to emit…

“Now that the ETS comes with a binding cap, council consideration of carbon emissions in consenting cannot really affect New Zealand’s net emissions. If a new subdivision means more driving and more electricity use, every tonne of associated carbon must be bid away from some other use. If the council tells developers every house must meet costly standards for energy efficiency, the home’s buyers will have a higher upfront cost and lower ongoing electricity costs. But net emissions will not change. The household’s lower demand for carbon credits just frees up credits to be used elsewhere.”

In other words, while the new law will not reduce overall emissions within New Zealand, it will profoundly delay projects and increase development costs.

As a result, Minister Parker’s claim that the changes he introduced represent a “significant milestone in reforming the RMA that would reduce complexity, increase certainty … and makes significant improvements to environmental outcomes” is a gross misrepresentation – an absurdity that is patently untrue.

In fact, the new Act repealed many of the changes that National had introduced to try to streamline the RMA – including allowing a Minister to intervene to ensure councils were releasing sufficient land for housing, precluding many resource consent applications for residential activities and subdivisions from having to be publicly notified, and removing development contributions to reduce costs.

In addition, Labour’s new law introduced a highly complex freshwater management process, it has given submitters the right to cross-examine each other during RMA hearings, and it has targeted farmers with draconian restrictions that require some operators to develop freshwater farm plans that must be certified and audited, nitrogen monitoring logs that must be inspected, additional waterway fencing, and stronger penalties for non-compliance.

This RMA amendment is one of four separate initiatives involving the RMA that are being undertaken by the Labour-Green-New Zealand First Government.

Hypocritically, while Minister Parker had criticised National’s restrictions on consultation that aimed to prevent activist groups holding up resource consent applications, two of his own Government’s initiatives will bypass the RMA and public consultation entirely.

The Urban Development Bill contains new powers that would enable a new Urban Development Authority to bypass the RMA by establishing its own streamlined planning and consenting process. A hearing panel headed by an Environment Court Judge, would limit consultation – except with Maori interests.

And the new COVID-19 Recovery (Fast-track Consenting) Act also bypasses the RMA through a separate fast-track consenting and designation process for ‘shovel-ready’ infrastructure and development projects. The Government wants to get work underway without the need for resource consents. As a result, they plan to avoid public consultation altogether – except with Maori interests.

The final RMA-reform measure undertaken by Labour was the establishment of another taskforce. According to the chair of the Resource Management Review Panel, retired Appeal Court Judge Tony Randerson, “Serious challenges have emerged in our ability to respond quickly to urban development pressures and to house our people in liveable communities. And we are facing a significant new threat in dealing with climate change. The natural environment has also suffered with deteriorating freshwater quality in our streams and rivers and diminishing biodiversity amongst many concerns.”

Judge Randerson explained that a priority of their proposed reforms was to ensure “that the principle of partnership inherent in the Treaty moves towards an everyday reality.”

As a result, we should expect that the recommendations, which were due at the end of June, will more than likely bring the ambition of the Maori elite to control natural resources within New Zealand another step closer.

The Labour Government has acknowledged that the RMA has become so complex and time consuming that it is a barrier to getting things done. However, instead of fixing the problem for everyone, their solution has been to pass new laws that sidestep the Act altogether – for their own government projects. Other Kiwis have been left to struggle through a cripplingly bureaucratic process that is literally killing initiative and entrepreneurial activity in New Zealand.

This country urgently needs a government with the courage to repeal the RMA and replace it with common-sense environmental and planning laws that avoid capture by activist groups – including iwi leaders who are driven by tribal self-interest instead of the good of the country.

*Do you agree with Environment Minister David Parker that his changes to include climate change effects into the RMA will reduce complexity and increase certainty?