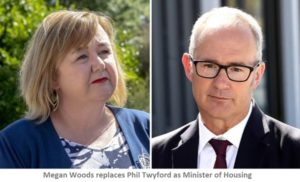 KiwiBuild has been a disaster for the government. Today’s Cabinet reshuffle confirms that. Essentially it was a ‘face saving’ exercise for the Government.

In her press conference, Prime Minister Jacinda Ardern claimed the job was too big for one Minister: “It has become clear to me that the range of challenges in fixing the housing crisis are too great for one Minister. Therefore I am putting in place a team of senior ministers to deliver the full breadth of our housing plan, from KiwiBuild right through to tackling homelessness.”

Five Ministers are now involved in housing – Megan Woods has become the new Minister of Housing, Phil Twyford has been shifted sideways to focus on urban development, and Kris Faafoi will handle public housing. In addition, Nanaia Mahuta is the Minister of Maori Housing, and Jenny Salesa the Minister for Building and Construction,.

While the Prime Minister has acknowledged the difficult challenges in the housing sector, the real question is whether she intends to tackle the underlying problems that created the housing affordability crisis, because to date, there has been no indication that she plans to do so.

In fact the Government’s solution to KiwiBuild’s failure to deliver the homes it promised, is to give it a new Minister and then bury it inside a new housing agency that has the power to sidestep the problems – but more on that later.

Before KiwiBuild disappears into the restructuring blender, here’s a review of its chequered history.

The Labour Party promoted KiwiBuild as a cure-all to fix New Zealand’s housing crisis by providing a flood of affordable houses for first home buyers.

But the policy was unrealistic from the start – lacking in detail and being overly ambitious.

KiwiBuild had emerged in 2012, when then Labour Leader David Shearer was searching for a popular policy he could announce at his Party’s annual conference.

His original concept was for the government to build 50,000 homes over a 10 year period at an average cost across the country of $300,000. But just before the policy was launched, the target was increased to 100,000 homes – presumably to create a bigger impact.

But then the problems emerged. The Minister was warned that there was not enough Crown-owned land available in Auckland to build 100,000 homes – the equivalent of two cities the size of Hamilton.  This was due to a sizeable proportion of the land being subject to a right-of-first-refusal agreement with local iwi under their Treaty of Waitangi land settlements.

There were concerns about labour – with an estimated 17,000 construction workers required to build just 5,000 houses in Auckland, the potential shortage of manpower for such an ambitious project was also seen as a major constraint.

Then there was the escalating cost of KiwiBuild homes. From an original price estimate of $300,000 when the policy was first launched, the price cap for larger homes in Auckland and Queenstown is now $650,000 – and $500,000 for the rest of the country. This is in spite of a survey carried out in 2015 that indicated only 25,000 renters in Auckland could afford even a $500,000 home.

When it came to eligibility for the scheme, only first home-buyers and an asset-tested group of ‘second-chancers’ were able to sign up. Because applicants needed to find $50,000 to $65,000 for a deposit, income thresholds had to be extended to couples earning up to $180,000 a year, and individuals earning up to $120,000 – a far cry from the struggling first home buyers the policy had been designed for.

The original requirement that KiwiBuild buyers should live in their new homes as their main residence for five years or return any capital gain to the Government if they sold – was changed. Now buyers who sell within three years are required to pay 30 percent of their capital gain to the government – the other 70 percent is their windfall gain.

Because KiwiBuild purchasers effectively buy their homes at cost, Labour’s scheme gives ‘lucky’ middle income earners the opportunity to make a lucrative capital gain. That was certainly the case with the first 18 homes balloted – each was secured at around $100,000 below the market price of similar houses in the development.

At the start of 2019 the first-year KiwiBuild target of 1,000 homes was downgraded to 300. Subsequently, all targets have been removed as the scheme undergoes a “recalibration”. At this stage it looks like only 122 homes will be completed by the end of the first year, instead of 1,000.

If the Government was to become serious about addressing problems that are constraining house building in New Zealand, they would primarily need to rein in local authorities and replace or significantly reform the Resource Management Act.

The problem is that planning rules, mandated by the RMA, have been hijacked by council planners and environmental activists, creating significant delays and costs to projects that common sense would otherwise permit.

This has restricted the availability of land for development and created excessive holding costs while development proposals work their way through a consenting process encumbered with compensation payments and needless expert reports.

The RMA has now become an industry built around a complex web of rules and regulations that are being perpetuated by those who profit from it: councils, planners, commissioners, lawyers, judges, iwi, environmentalists – each is in there advancing their cause at the expense of those brave or foolhardy enough to propose a development.

Consent delays in particular add significantly to the upfront costs of a development – as in the case of the Long Bay residential project in Auckland, which began in 1998 but was not able to commence until 2011.

Such delays are often caused by environmentalists trying to block developments, but multiple iwi are also responsible as each wants to extract payments for producing cultural assessment reports – even if sites are of no real significance to Maori.

Then there are building sector regulations, which increased dramatically as a result of the leaky homes disaster, adding significantly to the cost of building. Labour costs have also increased substantially, especially since the Licensed Building Practitioners regulations effectively created a restricted trade. New Health and Safety requirements, which introduced the need for more stringent work place safety regimes, also add to the cost of construction.

These and many other such factors have now made housing increasingly unaffordable for those on low incomes.

Surely it is incumbent on central government to address such difficulties and find solutions – rather than exempting themselves from the problems – as they are planning to do through their new housing bill.

HLC was established by the Labour Government as the Hobsonville Land Company in 2006, to develop housing on the former Air Force Base. Now called Housing Land Community, the agency is working with Housing NZ on urban regeneration projects on 1,000 hectares of state-owned land across Auckland.

The super agency that will be formed by the merger will have draconian new powers that will enable it to not only override council plans and consenting laws, but to also compulsorily acquire private land for its developments and impose new taxes on landowners.

This week’s NZCPR Guest Commentator is Auckland-based communications consultant Fiona Mackenzie, who has examined the Bill and is extremely concerned about the disproportionately powerful role that iwi will play in the new Urban Development Authority:

“In the way of apartheid governments, ‘Maori’ seem to be centre and foremost in everything Kainga Ora will do, from the make-up of the Board to its projects. Yet the Bill doesn’t actually define who constitutes ‘Maori’ so we must assume it will be the tribal elite who’ll have the say-so and enjoy the advantageous business opportunities to come.

“Successive governments have created such a bureaucratic and legislative quagmire that a Housing and Urban Development Authority does look to be the solution.  Much of this Bill could be good if it can eliminate the obstacles and bottlenecks to deliver cost-effective, well-built, liveable housing near jobs, services and amenities.

“But the thought of a super-powerful and unfettered, ‘race-based’ Authority rearranging our towns and cities, answerable only to the tribal elite, with yet unspecified and possibly extensive powers, while providing risk-free investments for tribal businesses first and foremost, is most disturbing. Especially as the rest of us appear to have no rights under this legislation, yet when undertaking our own developments, we will still be subjected to the nightmares imposed by the RMA, iwi ‘consultation’ and local body bureaucracies.”

The new Urban Development Authority is expected to be established in October. But the Bill has been so rushed – no doubt to prevent KiwiBuild from further embarrassing the Government – that the Authority’s special powers will not be conferred until a second Bill is passed, later in the year.

Many of the serious concerns about the Bill are outlined in a regulatory impact statement prepared by the Ministry of Housing and Urban Development.

With a lack of policy detail contributing to KiwiBuild’s failure, it’s extremely disturbing to find there is such a lack of detail in this new Bill that it’s impossible to reliably estimate the cost, impact, and risks associated with the new law: “…we are unable to make a reliable estimate of the impact that the proposals would have on enabling development projects generally”.

Serious concerns are raised about the potential for political interference, since the Bill gives the Minister ‘unfettered’ influence over decision-making – with no rights of appeal. This creates serious risks “around the use of this legislation for different political pressures and ideological values”.

There’s also a real cause for alarm over the extraordinary powers being proposed for the new agency that would allow it to compulsorily acquire private land for its developments. While safeguards are available for the owners of sensitive Maori land – to ensure it can only be acquired by agreement, or by partnering with Maori land owners – there are no such protections for other landowners, who would be forced to sell.

It’s also proposed that the new agency should have the ability to levy taxes on property owners living near to new developments, who, they claim, would also benefit from the improved infrastructure and services that the project would bring to the neighbourhood.

Other revenue-raising mechanisms have also been suggested including stamp duties, sales taxes, land taxes, and other forms of capital gains taxes.

The reality is that the Government’s housing policies are presently in a state of flux. If you have concerns about the direction that they are taking, there’s still time to share your views – public submissions on the Housing and Communities Bill close on 11 July 2019. Full details can be found here.

Do you believe that the new Urban Development Authority should have the power to compulsorily acquire private land for its developments?