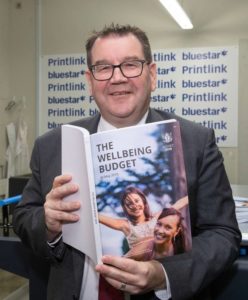 The The Government’s 2019 Budget was delivered last Thursday, but its arrival was problematic.

Earlier in the week, the National Party had publicly released a slew of budget information obtained simply by going onto Treasury’s website and using their search engine.

The chief executive of the Treasury, Gabriel Makhlouf, claimed its systems had been deliberately and systematically hacked and the matter was referred to the Police.

Finance Minister Grant Robertson lashed out, implying criminal intent: “We have contacted the National Party tonight to request that they do not release any further material, given that the Treasury said they have sufficient evidence that indicates the material is a result of a systematic hack and is now subject to a Police investigation.”

The next day, however, the Police advised Treasury that if someone obtained sensitive material by using a website’s search engine, it was not a hack and was therefore not unlawful.

National’s leader Simon Bridges accused the Government and Treasury of smearing the party: “It shows deep dishonesty. Treasury has known since Tuesday exactly what happened and they covered it up to hide their incompetence. They have sat on a lie, calling the National Party criminal hackers and calling in the police.”

In fact, the whole affair highlighted not only Treasury’s inability to keep confidential information secure, but the Government’s propensity to blame National for their own incompetence.

But the bad news did not stop there.

On Budget morning, copies of the confidential documents were handed out to journalists hours ahead of schedule – only to be collected back once the error was discovered.

It then turned out that the jubilant faces on the cover of Labour’s Wellbeing Budget – a lady called Vicky Freeman and her daughter Ruby-Jean – had moved to Australia in December because it was too costly to live in Auckland.

She told reporters that she had struggled with rent of $700 a week, and that some weeks, paying a 15-year old to mind her daughter while she worked cost more than she earned in her part-time job.

In fact, in spite of all their talk of wellbeing, it’s Jacinda Ardern’s Government that is largely responsible for the rent hikes in many parts of the country.

Once elected, Labour wasted no time in attacking landlords, even though most are Mum and Dad investors saving for their retirement with a single rental property.

First they extended the bright line test, which is a capital gains tax for the owners of rental properties, from two to five years.

Next, by blaming landlords for the health problems of their tenants, Labour justified a raft of expensive new regulations for rental property owners, that are pushing up rents. The ring fencing of tax losses will exacerbate the problem.

But back to the Budget.

“Leaving aside the sugar coating, the Well-being Budget delivered what we would expect from a socialist government – more spending on social services, while largely ignoring the role of the private sector in wealth creation.

He makes the point that all governments spend with the intention of having a positive effect on well-being and says, “A more appropriate debate is the fundamental question about the approach a government should take to improve community well-being. And there is a major difference in approach between a left leaning government who believe bigger government is best and those said to be on the right who believe in free markets.

“Our current socialist coalition appears to have the view that free markets do not deliver a ‘fair’ distribution of rewards – according to their perception of fairness; and at a practical level they have etched out a political constituency that would rather take from others than earn for themselves. I have no doubt history will, eventually, show the government’s well-being approach to be a spectacular failure – but then I am of a view that socialism as a political system is a spectacular failure.”

Concerns about falling business confidence have beset this Government since they were first elected. Businesses have been concerned about their anti-business agenda, including industrial relations changes to empower the unions and an escalation in the minimum wage from $15.75 an hour to $20 in just four years.

Furthermore, the looming threat to economic wellbeing posed by their radical Zero Carbon Bill is edging ever closer, leaving many businesses far from optimistic about the future.

The Budget shows that $84 billion in core Crown tax revenue will be collected in this financial year, up from $80 billion last year. The main contributors are $33 billion in income tax, $30 billion in GST, and $15 billion in company tax. Excise tax of $2 billion consists of $700 million in alcohol tax, $500 million in tobacco tax, and $1 billion in petrol tax. Other indirect taxes contributed $5 billion, including road user charges of $2 billion.

While the announcement of the world’s first wellbeing budget brought Jacinda Ardern the international accolades she clearly seeks, the reality is that this budget does little to address the underlying causes of disparity.

The main big-ticket items, include over $2 billion for replacements for the defence force’s aging Orion aircraft, $1.9 billion for mental health, and $1 billion for rail.

New Zealand First was clearly a big winner from the budget securing significant funding for trains and planes.

The Green Party were winners too but in a more in a more insidious way. There is no doubt at all that their $13 million cannabis referendum will have a far greater chance of success if sufficient mental health services are in place to cope with the expected increase in dope-related psychosis and addiction. By significantly boosting mental health and addiction services, the Government will be able to counter objections along those lines.

Another major winner from the Budget are iwi leaders.

No doubt mindful of the problems that beset Helen Clark’s Labour Government, when they introduced race-based funding in Budget 2000 through “Closing the Gaps” – a strategy New Zealand First Leader Winston Peters described as “social apartheid” – a well-orchestrated campaign was run ahead of Budget Day claiming that services ‘for Maori by Maori’ is the only effective way to reduce social and economic disparity.

Back then, the National Party, which stood for equality before the law and one standard of citizenship, strongly opposed race-based funding, and as a result of their opposition, Closing the Gaps was largely abandoned.

Things have now changed and unfortunately, National no longer appears to oppose race-based funding, even though most New Zealanders believe government assistance should be based on need not race.

New Zealand First, which campaigned against race-based policies, has also been silent on the issue.

As a result, race-based funding is on the increase, with the Budget showing well over $500 million worth across many portfolios – much to the delight of the iwi elite who will end up controlling the contracts and the money.

In Vote Health, for example, funding for Maori and Pacific health service providers has more than doubled from $20 million to $43 million, $7 million has been allocated for services that are either “for Maori” or “by Maori”, $3 million for Maori workforce development, and $1 million to improve Maori health outcomes.

Vote Justice sets aside $8 million for ‘building the Maori Crown Relationship across the public sector’, with a further $1 million available for “funding for events that strengthen and display a Maori Crown relationship”. Whether this will become a $1 million hui slush fund remains to be seen.

Vote Corrections shows a $22 million appropriation for a “kaupapa based pathway for Maori, co-designed and implemented by Maori in partnership with Corrections.”

Vote Treaty Negotiations shows $37 million has been set aside to support Crown negotiations and administration in the Treaty settlement and Marine and Coastal Area Act claims process. A further $11 million has been allocated to fund iwi preparing their claims for our coast, and an additional $4 million is available for Crown engagement.

Vote Courts shows that even though historic Treaty settlements are coming to an end, funding to the Waitangi Tribunal has been increased from $10.5 million to $10.9 million.

Vote Local Government earmarks $10 million for “enhancing Relationships Between Local Government and Iwi/Maori to Improve Partnerships”. Whether this funding is designed to assist iwi in persuading council to appoint their representatives onto councils with full voting rights – without needing to be elected – is not clear.

What’s missing from the Budget is tax relief for families, even though the recent capital gains tax debate highlighted the benefits of lowering income tax thresholds.

While the Finance Minister used his Budget speech to explain the importance of measuring the success of well-being initiatives – including the objective of improving “the prosperity of our nation” – most have no measures attached.

However, there is an appraisal of sorts for Shane Jones’ $3 billion Provincial Growth Fund. Budget documents explain that $1.7 billion of the fund has now been allocated to help ‘unlock the economic potential of New Zealand’s regions’: “We have supported more than 250 projects and created more than 560 jobs”.

Just imagine the number of new jobs and ‘prosperity’ that could have been created had the $3 billion been returned to Kiwis in the form of tax cuts.

Without a doubt, the Government’s Wellbeing Budget has been a massive PR exercise. But not only does it authorise loose and wasteful spending, it also demonstrates only too clearly that Jacinda Ardern’s Government still doesn’t understand that economic growth is the key to raising living standards and improving wellbeing.

Do you believe Labour’s Wellbeing Budget will improve “the prosperity of our nation”?