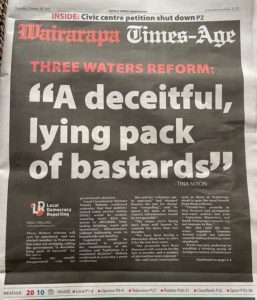 Two headlines from the past week sum up the current mood of the nation: “Sir Russell Coutts accuses  Government of dictatorship” and “A deceitful lying pack of bastards”.

These harsh words fairly reflect the betrayal New Zealanders feel when a Prime Minister, who promised to govern for all New Zealanders, acts like a dictator, passing authoritarian laws and turning our democracy into a totalitarian State.

Three Waters is a case in point. The Government’s announcement of the compulsory acquisition of the country’s three-water infrastructure – freshwater, wastewater, and stormwater services – breaks the promise made to councils that joining the scheme would be voluntary.

An aggressive $3.5 million taxpayer-funded propaganda campaign that blamed councils for providing poor quality water services, was clearly designed to set the scene for the effective nationalisation of water into four separate entities controlled by the Maori tribal elite.

But this unmandated transfer of the democratic control of an essential public resource to unaccountable private sector Maori corporations, may well prove to be a step too far – the point at which New Zealanders turn against their Government.

The Three Waters reforms will be rolled out under cover of the pandemic. Legislation is expected just before Christmas, no doubt hoping that the opposition will be distracted over the summer. While the Select Committee process will likely be a farce – just as it was when Maori ward petition rights were abolished – it will, nevertheless, be crucially important that opponents express their outrage, otherwise the Government will claim their silence as approval.

Meanwhile the Ardern administration is attempting to distance itself from its legacy of failed pandemic management – leaky borders, never-ending lockdowns, the slowest vaccine rollout in the OECD, critical health sector staff shortages, and one of the lowest ratios of intensive care beds per head of population in the Western world.

The PM’s masterstroke “traffic light” strategy will see blame for the slow vaccine rollout transferred from ‘the Government’ to District Health Boards. This will enable the responsibility for the failure to reach vaccination targets to be pinned on the DHBs – conveniently maligning them ahead of their planned replacement with a racially segregated health system controlled by the Maori tribal elite.

The ‘traffic lights’ will enable Covid to remain in the limelight right through to the next election, ensuring the on-going control of New Zealanders.

The new system signals the end of the ‘elimination’ strategy that was introduced by the PM in March 2020 to replace the Ministry of Health’s Pandemic Plan – a plan designed to keep infection at manageable levels until natural immunity to the virus was built.

Once Jacinda Ardern took control, she imposed the world’s harshest lockdown and set a zero-Covid target – seemingly to lay claim to becoming “a world leader” in controlling the virus.

The inconvenient truth she conveniently overlooks is the detrimental impact on health and wellbeing caused by her draconian lockdowns – the hundreds of thousands of planned medical procedures cancelled resulting in complications and deaths, the escalation of domestic violence, and the creation of a mental health and financial security crisis as livelihoods are crushed.

Now, almost two years later, we are returning full circle to the virus being controlled within the community. The difference is that under Jacinda Ardern’s management, New Zealanders now rely on State control and a vaccine with never-ending booster shots, instead of freedom and the superior protection provided by natural immunity.

The new traffic light system will become operational once the country hits a 90 percent double-vaccination rate. This is a higher vaccination target than almost any other country, seemingly so the PM can re-claim her ‘Covid Queen’ title.

But I have a simple message for Jacinda: Kiwis don’t care about your status on the world stage! What we do care about is that you stop ruining our country.

The traffic light system will take the ‘blame game’ to new heights by dividing New Zealand into two classes of citizens – the vaccinated with superior rights and freedoms, and unvaccinated, relegated to second-class status in their own country.

The fact that those who are infected, whether vaccinated or unvaccinated, have similar viral loads and transmission capacity, and can therefore equally spread the virus, doesn’t seem to matter to our Prime Minister. In Jacinda Ardern’s propaganda war, the blame for spreading the virus is being shifted from Government mismanagement to the unvaccinated.

The PM seems unconcerned that many of the unvaccinated are simply seeking an alternative to the Government’s preferred Pfizer vaccine. Nor does she seem to comprehend that to many people Clause 11 of our New Zealand Bill of Rights: “Everyone has the right to refuse to undergo any medical treatment” is an inalienable right that was specifically introduced to protect the public from any government that was attempting to coerce the population in this manner.

And as the editor of the British Medical Journal Peter Doshi pointed out in August, there are many reasons to be concerned about the Pfizer vaccine: “On 28 July 2021, Pfizer posted updated results for their ongoing phase 3 covid-19 vaccine trial. But here we are, 13 months into the still ongoing, two year pivotal trial, with no reported data past 13 March 2021, unclear efficacy after six months, evidence of waning protection, and limited reporting of safety data.”

Villainising the unvaccinated and turning their friends, family, and colleagues against them, is grotesque. Through her actions, Jacinda Ardern is following in the sinister footsteps of Hitler, who persuaded fellow citizens to persecute marked groups in society – and we all know where that led.

The one thing we should have learnt from the atrocities of despots is that rule by division is dangerous. It should never be accepted, and people have a duty to ensure it never prevails.

The fact is that great leadership inspires, binding people together by what they have in common. In this context an inspirational government would seek to address the concerns of the vaccine hesitant. In doing so, they would find that many are worried about mRNA vaccines and would gladly take a shot if a traditional vaccine alternative was available.

But with no such option being offered by the Ardern regime, they are being bullied and threatened: ‘take the vaccine or you will lose your livelihood, your liberty, your friends, and you won’t even be able to freely associate with your loved ones’.

Who would have ever thought a Kiwi Prime Minister would act in this way!

So how will the new Covid traffic light system work? While it’s promoted as only becoming operational once all DHBs hit 90 percent double vaccination rates, that’s not the case. Auckland and the South Island may be able to start ahead of the rest of the country once they reach the 90 percent target.

Everywhere else will have to wait until all DHBs reach 90 percent – with those lagging behind no doubt blamed for holding the country back even though the vaccinated are just as likely to spread the virus as the unvaccinated.

Apart from confusion, what will be the impact of the traffic light system? Once operational, many health experts are predicting hospitals will be inundated with a tsunami of Covid cases.

A green light signals minimal virus spread, and while the vaccinated would have a normal life, continued restrictions would remain in place for the unvaccinated.

The system relies heavily on surveillance, especially the on-going checking of vaccination certificates, with penalties for those failing to comply.

No end date has been set for these restrictions – but it doesn’t have to be like this.

This week’s NZCPR Guest Commentator, Emeritus Professor Robert Clancy of the University of Newcastle’s School of Biomedical Sciences and Pharmacy, is a leading Australian clinical immunologist with an impressive record in the field of mucosal immunology, who strongly believes that early treatment protocols are necessary in the fight against Covid-19.

Professor Clancy explains that in addition to a vaccine strategy, in countries like New Zealand and Australia, which have pursued elimination and have little natural immunity to Covid, the evidence supporting early treatment with re-purposed medications to help prevent people from getting sick and needing to go to hospital is compelling:

“The first is a WHO study in Uttar Pradesh, India’s most populous state (230 million people). Medical teams visited 98,000 villages, providing ‘kits’ containing ivermectin for the treatment of those with Covid-19. Within 5 weeks, new cases had dropped by 97%. Meanwhile, Kerala, another Indian state with 8% the population of Uttar Pradesh and not using ivermectin, recorded over 31,000 cases per day. Similar results are reported in areas of Peru, Mexico and many other regions.”

Professor Clancy points to Israel as providing guidance for countries like New Zealand that are reliant on the Pfizer vaccine: “Israel was used as a ‘laboratory’ for the Pfizer vaccine. Six months after vaccination, there was essentially no protection against infection or mild disease, although protection against severe disease remained at 85-90%. Thereafter a rapid and progressive loss of protection against more severe disease. Infected vaccinated and unvaccinated subjects have similar viral loads, and transmission capacity. Immunity following natural infection is better and more durable than that induced by vaccination. There is no sense in immunising those who have had Covid infection in the last 6 months.

“In an Australian context, by New Year 2022, about 2 million vaccinated Australians will have lost protection against infection and mild disease. Infections will increase as borders are opened and we re-enter the international community. Our lock-down policy has limited the acquisition of natural immunity. Although we can expect high levels of infection with less severe disease, pressure on hospitals will increase. The experience of Israel and Iceland with high vaccination rates of 85% or more, provides a possible scenario for Australia. In Israel, with a population of less than 10 million, the “third wave” continues, with 1500 new cases and 30 deaths a day. More concerning are reports of high Covid mortality in some jurisdictions, in older vaccinated subjects. Variants such as the further-mutated Delta variant in the UK will continue to appear, with unknown infectivity, response to current vaccines and pathogenicity.”

Professor Clancy concludes, “we cannot vaccinate ourselves out of the pandemic. Most deaths in England over the last 7 months from Covid-19 are in vaccinated subjects, and studies across 68 countries confirm increases in Covid-19 infections are unrelated to levels of vaccination. Booster shots with current vaccines come with little support, and possible enhanced toxicity as reported to the FDA. Antigen-based vaccines such as NovaVax with its strong metrics on efficacy and safety, need to be considered. It is understood this vaccine will be available by year-end.”

In January, following reports of ivermectin’s success in treating and preventing Covid-19, the US National Institute of Health upgraded their recommendation on the use of the drug, enabling doctors to prescribe it as another therapeutic option for treatment of the virus.

With a tsunamic of cases anticipated in this country once the traffic light system is introduced, instead of facing on-going restrictions, shouldn’t New Zealand doctors also be given the freedom to prescribe for their patients any of the readily available treatments and preventative remedies that are being used successfully overseas?

Surely the ultimate goal is to prevent from Kiwis getting sick once Covid is endemic in our community, so traffic lights and on-going surveillance can be phased out. It’s only then that the Covid blame game will stop, and the dangerous fracturing of society being caused by Jacinda Ardern can begin to heal.

*Should New Zealand doctors be free to prescribe whatever treatment and preventative remedies they choose for the treatment of Covid-19?