The Danger of Co-Governance 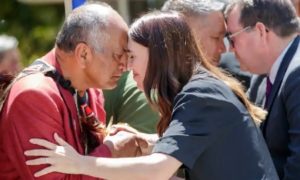 In 2006, the former US President Barack Obama, then a Senator, used a speech at the University of Nairobi to rail against tribalism:

“Ethnic-based tribal politics has to stop. It is rooted in the bankrupt idea that the goal of politics or business is to funnel as much of the pie as possible to one’s family, tribe, or circle with little regard for the public good. It stifles innovation and fractures the fabric of the society. Instead of opening businesses and engaging in commerce, people come to rely on patronage and payback as a means of advancing. Instead of unifying the country to move forward on solving problems, it divides neighbour from neighbour.”

With on-going stories of corrupt tribal leaders living in palaces with taps of gold while ‘their people’ suffer in slums epitomising the excesses of tribalism, New Zealanders from all sides of the political spectrum have been horrified to find Jacinda Ardern – under the guise of implementing the United Nations Declaration on the Rights of Indigenous Peoples – is forcing tribal rule onto our country.

The Prime Minister is so manipulative, that she not only kept this radical agenda secret from her Deputy Prime Minister, New Zealand First Leader Winston Peters, throughout the whole of the last year of their coalition government, but also from the public during the 2020 election campaign. Her intentions were not revealed until after she gained the power to govern alone, but even then, there has been virtually no openness nor transparency.

The path to tribal rule started with the public being blanketed with Maori language and culture, State employees being forced to undergo Treaty “re-training”, and media tapping into the Government’s Public Interest Journalism Fund being required to promote Treaty propaganda.

However, things have taken a more sinister turn over recent months, with our Prime Minister now privatising – under the banner of ‘co-governance’ – essential services, including health care and water services, to the tribal elite who run multi-million-dollar business development corporations.

As Victoria University’s Dr Bryce Edwards explains: “The co-governance model is a form of privatisation. The new companies will be half controlled by private organisations – iwi, which are increasingly highly corporate in their business operations.”

It is a scandalous situation – as Auckland University’s Professor Elizabeth Rata explains in an article in The Australian: “New Zealand’s constitution is currently undergoing a major heart and lung transplant via co-governance arrangements between Maori corporate tribes and the government. It beggars belief that one of the modern world’s first democracies — founded in the fledgling 1852 Constitution Act — is descending into ethno-nationalism but the Labour Government is determined to embed racialised policies across a swathe of the nation’s laws and institutions.”

Those ‘social justice warriors’ in our universities, government agencies, and the media are spreading the disinformation that underpins Jacinda Ardern’s tribal rule agenda – namely that the authority for 50:50 co-governance comes from a Treaty ‘partnership’ between Maori and the Crown. They allege this was affirmed by the President of the Court of Appeal, Justice Robin Cooke in the 1987 State-owned Enterprises case between the Maori Council and the Attorney General.

This week’s NZCPR Guest Commentator, the former Judge and Law Lecturer Anthony Willy has examined the case, and, by exposing the ‘partnership’ claim as a gross fabrication, he reveals the deception being used to persuade New Zealanders to accept tribal control:

“On the Wednesday the 13 April 2022 the political commentator Audrey Young wrote an article for the New Zealand Herald about co-governance and a ‘partnership’ between those with some Maori genes and the remainder of New Zealanders. The writer concludes that such a unique constitutional arrangement results from the decision of the New Zealand Court of Appeal in New Zealand Maori Council [1987] 1 NZLR 641.

“It is clear from the growing body of writing and commentary that very few of the authors have read the judgment or understand the jurisprudence at the heart of judgment writing – what it is that comprises a judgment of a court. Given the widespread ignorance which surrounds what has become holy writ to Maori radicals it is timely to examine what the case does and does not decide.”

The former Judge explains the difference between the “obiter dicta” discussion of a case, which helps establish the arguments but forms no part of the decision, and the “ratio decidendi”, which is the outcome of the case that becomes part of the common law until it is overturned by a later Court or by Parliament. He then goes through the findings of each of the Court’s five Judges, explaining their over-riding objective was solely to ascertain “what, if any, are the principles underlying the Treaty” – not to create a “constitutional revolution” by suggesting that Maori should be sharing in governing the country:

“A great deal of social angst and raised expectations would have been avoided if those relying on the State-Owned Enterprises case had taken the trouble to read the document and made an effort to understand what was said. It is beyond question that nothing in the case suggests that the Treaty in any way creates a partnership between Maori and The Crown or brings into question the legitimacy of our democracy. To argue the contrary on the basis of this court case is either ignorant or wilfully dishonest.”

By using the Treaty ‘partnership’ deception to justify giving control of essential services to the Maori elite, Jacinda Ardern is deliberately robbing New Zealanders of crucial democratic safeguards, placing them instead at the mercy of unelected and unaccountable iwi business leaders working in their own best interests, not in the public good.

The reality is that once co-governance is put in place, the opportunities for tribal enrichment will be endless, with contracts, fees, and other mechanisms able to be used to secure taxpayer funding – exposing the country to the problems that plague all tribal societies including corruption and nepotism.

In fact, investigations have now found that a number of the family members of Cabinet Minister Nanaia Mahuta – the member of Labour’s powerful Maori Caucus who has been leading the drive for co-governance – have been given government positions of significant influence.

The Herald reports that a company run by Nanaia Mahuta’s husband was awarded contracts by the Ministry for the Environment during a period when she was the Associate Minister: “Documents released under the provisions of the OIA show that Ka Awatea Services, a consultancy owned by (William) Gannin Ormsby, Mahuta’s husband, was paid $25,000 for work that began in late October, 2020, and ran for 12 months. The work was described by the Ministry as ‘Maori expert ropu’.

“A second consultancy, Kawai Catalyst, owned by Tamoko Ormsby, a relative of Gannin Ormsby, and his wife, Waimirirangi Ormsby, was paid $65,000, for work described as ‘support for Maori expert ropu’ over the same period.

“Both Tamoko Ormsby and Waimirirangi Ormsby are also directors of Gannin Ormsby’s consultancy, Ka Awatea. The three family members made up the majority of a five member Maori group of advisers, or ‘ropu’, formed by the Ministry in 2020, to contribute to a waste strategy review. The group was described by the department at the time as ‘Maori waste minimisation technical experts and thought leaders with wide experience in the sector’.”

Sean Plunket’s The Platform has also been investigating, what, from the outside, appears to be a very bad case of nepotism. They reveal that Nanaia Mahuta’s husband, who served in the British Army from 1988 until 2001, began picking up work in local government and on trusts and boards after the 2017 election, culminating in the 2020 waste minimisation contract, where he involved his young relative and wife. They also report that Nanaia Mahuta’s sister, Tipa Mahuta, has been awarded key positions, including as chair of the Maori Advisory Group for the Three Waters reforms, and co-chair of the new Maori Health Authority.

Since Nanaia Mahuta, as Minister of Local Government is responsible for the Three Waters reforms, the appointment of her sister to the Maori Advisory Group was delegated to Kelvin Davis, the Minister of Maori Crown Relations – as required by the Cabinet Manual whenever a serious conflict of interest arises.

Mahuta family members were also involved in the development of He Puapua, the UN Declaration plan for tribal rule.

The He Puapua report, also acknowledged the significant contribution made by others, including Tamoko-o-te-Rangi Ormsby.

Tamoko Ormsby is, of course, a relative of Minister Mahuta’s husband – and the husband of the Declaration Working Group member Waimirirangi Ormsby, who had been appointed by the Minister. Presumably Nanaia Mahuta saw no conflict or perceived conflict in doing so.

The Cabinet Manual sets out stringent rules to ensure Cabinet Ministers do not deliberately nor inadvertently abuse their position – explaining in Section 2.66: “It may not be appropriate for Ministers to participate in decision-making on matters affecting family members, whanau, or close associates, for example, by proposing family members for appointments…”

It goes on in 2.67 to outline the importance of public perception – ‘the sniff test’: “Public perception is a very important factor. If a conflict arises in relation to the interests of family, whanau, or close associates, Ministers should take appropriate action”.

The Manual specifies the ‘appropriate action’ is, in the first instance, discussing the matter with the Cabinet Secretary, and, if necessary, the Prime Minister, followed by standing aside from decision-making, or, in extreme cases, being relieved of the portfolio.

If conflicts of interest lead to personal gain, there are serious implications.

In particular Section 2.64 of the Cabinet Manual states, “A pecuniary conflict of interest may arise if a Minister could reasonably be perceived as standing to gain or lose financially from decisions or acts for which he or she is responsible.” And Section 2.65 explains, “A conflict may arise if people close to a Minister, such as a Minister’s family, whanau, or close associates, might derive, or be perceived as deriving, some personal, financial, or other benefit from a decision or action by the Minister or the government.”

Doesn’t this raise questions about the legitimacy of the whole tribal rule agenda, since ‘co-governance’ could deliver significant ‘benefits’ to tribal groups associated with the Minister?

For instance, if the Minister succeeds in bulldozing Three Waters into law, since iwi will be given effective control of water services in New Zealand, what’s to stop them introducing a water royalty – in perpetuity – forcing Kiwis to pay them a fee every time a tap is turned on?

Wouldn’t that amount to a long-term gain for the Minister, her family, and associates?

Or what about her overhaul of Local Government – isn’t it her plan to introduce co-governance so iwi control the country’s local authorities and the rating system? Couldn’t that lead to preferential zero rating on iwi land, with rate increases for other landowners?

Jacinda Ardern’s path to co-governance and tribal rule, has barely got off the ground, but is already proving to be a recipe for Maori privilege by an inherited elite that will divide and weaken our society. Their end goal, of course – as outlined in He Puapua – is to ‘take the country back’ to tribal rule by 2040.

Are we really prepared to stand by and let this become the future for New Zealand?

*Do you believe the Treaty “partnership” claim – that underpins Jacinda Ardern’s co-governance agenda for tribal rule – is based on disinformation, or fact?