Justin Haskins is an executive editor and research fellow at the Chicago-based think tank, the Heartland Institute.

The ‘Green New Deal’ is more dangerous than you think 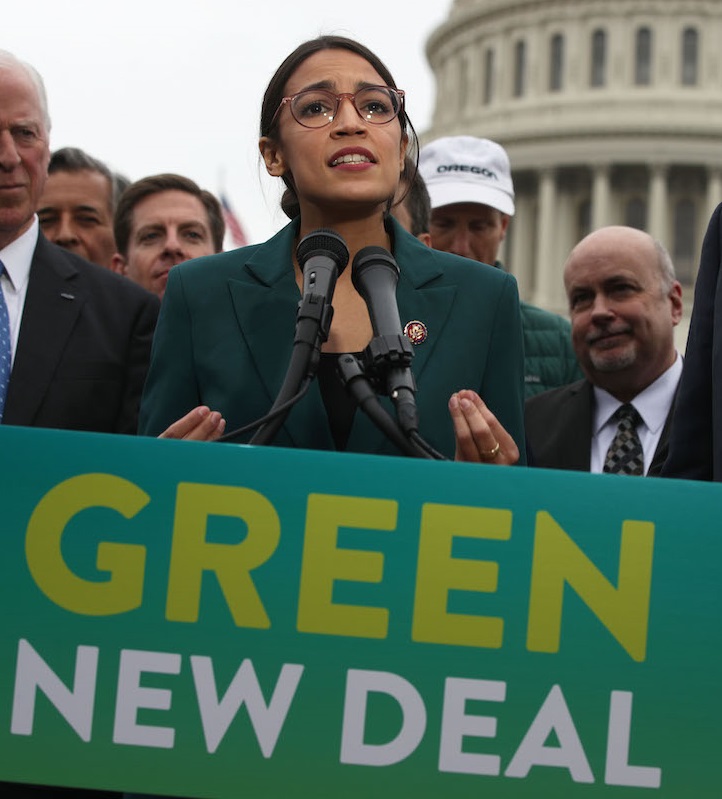 Rep.-elect Alexandria Ocasio-Cortez, D-N.Y., hasn’t officially started her first term in office, but she’s already pushing a massive, far-left proposal that would fundamentally transform much of the economy and push the country closer than ever to socialism.

For several weeks, you might have heard Ocasio-Cortez reference the creation of a “Green New Deal,” but until recently, few people knew what would be included in the plan. In a draft resolution to form a select committee in the House that would help develop legislation to put her plan in action, Ocasio-Cortez finally outlined numerous proposals that she says should be part of future Green New Deal legislation. Taken together, the many ideas included in Ocasio-Cortez’s Green New Deal would be the most radical policy shift in modern U.S. history, dramatically increasing the size and power of government and running up the national debt by trillions of dollars.

According to Ocasio-Cortez, the Green New Deal, which has been endorsed by Sens. Bernie Sanders, I-Vt., Cory Booker, D-N.J., Elizabeth Warren, D-Mass., and at least 40 House Democrats, would eliminate nearly all fossil fuels from the electric grid and force everyone in the country to buy from power companies selling only renewable energy.

This policy alone would create widespread economic chaos. Without government subsidies, renewable energy costs significantly more than many forms of traditional energy generation. My colleagues at the Heartland Institute found that electricity prices are, on average, increasing by 50 percent faster in those states that have created renewable power mandates compared to those that have rejected these economically destructive policies. This is especially troubling news for working-class and lower-income Americans, who spend much larger shares of their income on energy than wealthier families.

Not only is Ocasio-Cortez proposing to eliminate the hundreds of thousands of jobs in the fossil fuel industry in the United States, even though America recently became a net-energy exporter, she’s demanding this transition occur in just 10 years, from 2020 to 2030. This mandate would be virtually impossible to achieve because wind and solar energy sources still rely on back-up generation from fossil-fuel-powered energy when the wind isn’t blowing and the sun isn’t shining.

Ocasio-Cortez’s proposal doesn’t merely advocate for a gigantic shift in the U.S. energy industry. Her draft resolution says one of the proposed House committee’s priorities would be “upgrading every residential and industrial building for state-of-the-art energy efficiency, comfort and safety.” Taken literally, this mandate would cost trillions of dollars. There were about 136 million housing units in the United States in 2017, not including any businesses. Even if it would cost just $10,000 to “upgrade” every home and apartment, an extremely low estimate, this one relatively small part of her plan would cost more than $1.3 trillion.

Ocasio-Cortez’s draft resolution also proposes “eliminating greenhouse gas emissions from the manufacturing, agricultural and other industries, including by investing in local-scale agriculture in communities across the country,” as well as “eliminating greenhouse gas emissions from, repairing and improving transportation and other infrastructure, and upgrading water infrastructure to ensure universal access to clean water.” It’s not clear whether this would eventually mean the elimination of all gasoline-powered cars, but even if we assume private ownership of these vehicles would be permitted, the removal of affordable fossil fuels, including natural gas, from all industry would increase the cost of developing, manufacturing, and delivering all goods and services in the country. It would force companies to spend, at the very least, hundreds of billions of additional dollars more than they do now — expenses that would inevitably be passed along to consumers.

The proposal includes numerous other radical policies as well. For example, Ocasio-Cortez’s Green New Deal would also create a single-payer healthcare system. If it’s anything like the Medicare for All plan promoted by Sanders, the cost of this single part of her plan would be $32 trillion over the first 10 years, according to estimates from the Mercatus Center. Ocasio-Cortez also says her plan would include a federal jobs guarantee “to assure a living wage to every person who wants one.”

You might be wondering where Ocasio-Cortez plans to get the tens of trillions of dollars it would cost to carry out these and the other socialist policies offered as part of her Green New Deal. According to the “Frequently Asked Questions” section of her draft resolution, Ocasio-Cortez says her proposal could be paid for using “the same ways that we paid for the 2008 bank bailout and extended quantitative easing programs, the same ways we paid for World War II and many other wars”: raising taxes, printing money, and creating new publicly owned banks.

Who would lead the charge in this radical new effort? Bureaucrats — the same people who can’t run the Postal Service or Amtrak without incurring huge amounts of debt and who haven’t managed to balance the budget in nearly two decades.

Although reports indicate House Democratic leadership plans to kill Ocasio-Cortez’s proposal for a new select committee, Green New Deal supporters say they are going to push forward and attempt to create legislation that would make these policy pipedreams a reality.

Make no mistake about it: This is one of the most dangerous and extreme proposals offered in modern U.S. history. It’s the sort of thing you’d see in the Soviet Union, not the United States. If we don’t stop the Green New Deal, our economy may not survive. This isn’t a battle we can afford to lose.

This article was first published in the Washington Examiner HERE.