Clive Bibby is a commentator, consultant, farmer and community leader, who lives in Tolaga Bay. 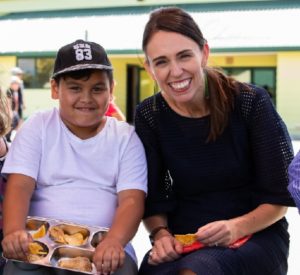 Although the PM’s stamp of approval of a scheme that provides free lunches to any school kid who wants it will finally open the flood gates to what will surely be a rush from other schools to follow suit, it won’t stop those of us who are convinced this is the wrong way to tackle “apparent” child poverty from looking for other more efficient ways of doing so.

I am an old timer living in a low decile community where you might think this sort of state intervention has some justification. As such, l regard myself as qualified to know a thing or two about the root causes of child poverty in this country and consequently, perhaps unsurprisingly, find the acceptance of these measures as being the best way of feeding “starving” children “abhorrent”.

I use those emotive terms when describing this issue simply because they are amongst the only ones that have any chance of awakening the nation to what is actually happening here.

We should be shocked and offended that it has come to this yet seem either oblivious or indifferent to the implications of these moves that have “socialism by stealth” written all over them.

In reality it is another example of us sleep walking to state control of just about every aspect of daily living and yet it is happening without a shot being fired – either by those like myself who are opposed to this type of state oversight or those who might have been agitating for the introduction of these taxpayer funded measures for a long time.

In order to appreciate the seriousness of this situation, we need to examine the parameters that are being used by the government and those advocating the introduction of “free school lunches” to justify their claims that there is no alternative to solving their perceived problem of child poverty amongst school children.

Unfortunately, like most of the modern day PC answers to society’s problems, it is based on a lie and we should be unafraid to call it as such.

Here’s what you need to know.

We can start with the premise being used that virtually all of our communities include already large and growing numbers of families that can’t afford to adequately feed themselves because the legitimate household income is insufficient to cover the costs of daily living. Sure there are struggling families in every community but those who have legitimate claims that justify asking for state assistance are nowhere near the number being promoted by those who would have us believe the figures are at such crisis levels. You only have to look at the faces of the bulk of those kids who were sharing a photo opportunity with the Prime Minister. I can’t recall noting too many who might qualify as impoverished.

But anyway, arguing about the actual numbers of those in need is pointless and will do nothing to help improve the situation of those in real need.

We need to find a way to address the problem using whatever amounts of taxpayers’ money without misusing funds that could be better spent elsewhere – which appears to be what is happening here.

Surely the public has a right to question the government’s motive in this nakedly self-serving decision and point out that they need to be a lot more upfront as to why they have suddenly chosen this problem as the vehicle for improving their chances at the next general election in September.

Are we being asked to accept that the government’s much heralded allocation of billions of dollars to emergency funding for those identified as in real need is in itself inadequate?  I can’t imagine any self-respecting politician admitting to that type of failure.

No – what we have here is a slick manoeuvre by the current government to gain public approval for a community programme that will make them look good in election year and allow the unquestioned spending of huge amounts of dollars solving a problem that is at best exaggerated and for the most part unnecessary.

I realise that by pointing out the Machiavellian nature of government actions here, l will draw the ire of those who will want to accuse me of having no compassion.

“Where is your sense of humanity?” they will cry!

I don’t give a rat’s arse what those guys think about me but am more concerned that the average decent kiwi understands the real issues at play under the guise of a call to arms.

Yes, we have an enduring problem of child poverty that has to be addressed but l am less worried about the amounts of money spent to fix it or where that money comes from than l am if, in the process, we as a community continue down this path of absconding from our responsibilities to our own families and the wider community.

If we allow these “band aid” measures to become permanent fixtures of our societal landscape without at first critically examining the real need, we might as well hand over the keys to what is left of our individual self-respect to those who regard themselves as the self-appointed guardian of the nation’s moral fibre.

I, for one, am not about to do that while there is still a chance that there are others out there who also want to remain in charge of our own destiny while the law gives us freedom to do so.

“We are our brother’s keeper” and that extends to grandma and granddad who are rightfully already (like me) enjoying the benefits that come from taxpayer funded contributions to our personal survival but has it really come to the stage where we need to include the kids in that form of subsidised living as well.

I sincerely hope not but if it does, we need to think of other less invasive and permanent methods of doing so.