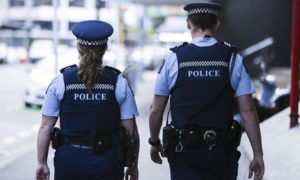 As we end the third week of the Government’s State of Emergency 28-day lockdown, it becomes easier to imagine what it would be like living under socialist rule in a Police State.

In a BBC interview, the former British Supreme Court Judge Lord Sumption warns that lockdowns represent an ‘hysterical slide into a police state’: “The real problem is that when human societies lose their freedom, it’s not usually because tyrants have taken it away. It’s usually because people willingly surrender their freedom in return for protection against some external threat. And the threat is usually real but exaggerated.”

There’s no question that the threat from COVID-19 in New Zealand has been exaggerated by Prime Minister Ardern and her Government to justify the imposition of State rule. Her doomsday predictions of “tens of thousands of deaths”, based on ‘worst-case’ computer modelling, helped shock the nation into compliance.

Lord Sumption asks the question that’s now on everyone’s mind – is the cure worse than the disease: “Is this serious enough to warrant putting most of our population into house imprisonment, wrecking our economy for an indefinite period, destroying businesses that honest and hardworking people have taken years to build up, saddling future generations with debt, depression, stress, heart attacks, suicides and unbelievable distress inflicted on millions of people who are not especially vulnerable and will suffer only mild symptoms or none at all?”

The former Judge reminds us that at times like this, when our democratic safeguards have been suspended, it’s our duty to question authorities and hold them to account.

As new information becomes available about the virus, it’s therefore crucial that we challenge the Government’s actions.

Back in January, they told us the New Zealand Influenza Pandemic Plan had been enacted to protect the country from the new coronavirus. That plan sets out three main goals. Firstly, a human goal to “minimise the impact of the disease and mitigate its effects”. Secondly a social goal to keep society functioning “as normally as possible during and after a pandemic”. And thirdly an economic goal to “minimise and mitigate the economic consequences of a pandemic”.

By making the radical decision to ignore the social and economic goals, in order to eliminate the virus through a nation-wide lockdown, the Ardern Government is disrupting society and damaging the economy to such an extent, that New Zealand will face not just a recession, but a prolonged and deep depression.

As April’s editorial in the New Zealand Medical Journal explains, “This elimination strategy is a major departure from pandemic influenza mitigation. With the mitigation strategy, the response is increased as the pandemic progresses and more demanding interventions such as school closures are introduced later to ‘flatten the curve.’ Elimination partly reverses the order by introducing strong measures at the start in an effort to prevent introduction and local transmission of an exotic pathogen…”

The editorial claims “New Zealand society has made a large ‘upfront’ sacrifice in pursuing an elimination strategy” – since the risks “may be substantial” and success “is far from certain”.

With influenza-type viruses usually regarded as far too contagious to be contained, the article would have been more accurate if it had pointed out that the decision to sacrifice New Zealand society by pursuing this high-risk elimination strategy rests with the Prime Minister.

Not everyone thinks elimination can work.

Professor Knut Wittkowski, formerly of New York’s Rockefeller University, is an epidemiologist with 35 years of experience. In a fascinating interview, he explains that the only way to stop influenza-type viruses is through building herd immunity within a population:

“With all respiratory diseases, the only thing that stops the disease is herd immunity. About 80% of the people need to have had contact with the virus, and the majority of them won’t even have recognized that they were infected, or they had very, very mild symptoms, especially if they are children. So, it’s very important to keep the schools open and kids mingling to spread the virus to get herd immunity as fast as possible, and then the elderly people, who should be separated, and the nursing homes should be closed during that time, can come back and meet their children and grandchildren after about 4 weeks when the virus has been exterminated….”

He warns that by trying to eliminate the virus, restrictions will need to be re-introduced whenever a new outbreak occurs, prolonging social disruption and economic hardship. Worse, those who are the most vulnerable – the elderly and anyone with chronic health conditions – will remain at serious risk of infection until a vaccine becomes available.

In pursing elimination, the Professor says that governments like ours have got it wrong. Instead of locking down the nation and trying to stamp out a virus that he believes cannot effectively be contained, we should be quarantining and supporting those who are vulnerable to keep them safe, while enabling the rest of society to get back to normal. In that way, within a month or so, once herd immunity has developed, not only will it be safe for those vulnerable groups to re-enter society, but our borders can also re-open.

Professor Wittkowski describes COVID-19 as ‘another bad flu’ – albeit one that can have grave consequences for the vulnerable.

But in reality, that’s also the case with the seasonal flu, since every year it kills upwards of 500 vulnerable New Zealanders – predominantly the elderly and those with underlying health conditions.

Professor Wittkowski also believes the public are being far too docile: “People should talk with their politicians, question them, and ask them to explain, because if people don’t stand up to their rights, their rights will be forgotten.”

Challenging the Government’s actions is exactly what a group of New Zealand academics and public health experts are now doing: “The way we stop the spread of an epidemic virus strain must be proportionate to the threat posed by the infection… Prolonged lockdown is likely to cause greater harm than the virus to the nation’s long-term health and well-being, social fabric, economy, and education.”

They too believe much of the modelling was overestimated, with new data now showing the virus is not the disaster we feared and no deaths of New Zealanders under the age of 70.

They warn “Elimination of this virus is likely not achievable and will be almost impossible to sustain as the virus is likely to become endemic across the rest of the world.”

As a result, they propose moving to a risk-based management plan aimed at preventing stress on the health system. Anyone who is low risk would be able to return to normal activities, while state-funded support would be provided to those at high risk of complications – namely the elderly and those with chronic medical conditions – to enable them to remain in isolation until it’s safe to re-enter society.

The ease with which New Zealand’s lockdown was imposed is a major concern to this week’s NZCPR Guest Commentator, former Judge and law lecturer Anthony Willy. He explains that for the first time in our history we have lost the rights and freedoms set out in our Bill of Rights – including the freedom of association, the freedom of movement, the right not to be arbitrarily detained, and the right to live in a Parliamentary democracy:

“In a sinister twist loss of these rights is backed by an apparently highly popular government-encouraged scheme of dobbing in one’s neighbour for possible infractions. At the time of the fall of the Berlin wall it was estimated that the membership of the Stasi was about 80,000 but that many times this number were unpaid informants assisting the Stasi to protect the state from infection with the very ideas and principles the government has suspended. It is impossible to know just what is the overriding public interest which supports this unprecedented government action. It might be the preservation of life; it might be to allow the health system to continue to function smoothly. It might be to save people from themselves, and from the negligence of others. None of this was thought to be necessary during the other Chinese virus scares – SAARS or Avian Flu or swine fever – so why now? Perhaps the Government has abrogated its duty to govern to the panicked computer modelling of some ‘experts’, forecasting terrifying death rates, much of which is already demonstrated to be hopelessly inaccurate.”

He warns that through their actions, this Government may have set a dangerous precedent: “There is nothing a lawyer or legislator likes more than a precedent. Once established it never goes away. The whole development of the common law and the liberties it supports rests on precedent. The law is what Courts say it is on up the hierarchy until it reaches Parliament which is the highest Court in the land. So, we now have it established that a fear of widespread infection in the community of a virulent disease is sufficient to lock people up in their homes and suspend Parliament. Really! This not the first such plague to affect New Zealand and it will not be the last. Yet this is the first time our civil liberties and our democracy have been suspended in order to minimise its effect on public health.”

Of course, environmental fanatics have long been pressuring the Government to declare a state of emergency over clime change. Now that we understand how easy it is to impose one, can we be confident that in the future our Prime Minister won’t decree climate change – which she has already described as her generation’s ‘nuclear free moment’ – to be as catastrophic as COVID-19 and require similar state of emergency controls?

Finally, while the country has been focussed on health, the lockdown, and the plight of the economy, there have been new developments regarding tribal claims for our coastline.

You may recall, that just before the April 3, 2017 deadline for claims under the Marine and Coastal Area Act, almost 600 applications were lodged covering the entire coastline. Some 200 were High Court claims, and 387 were for direct negotiation with the Minister of Treaty Settlements under the Crown Engagement pathway.

The strategy recommends that 175 of the Crown Engagement claims, which were also lodged in the High Court, should be deferred until after the Court hearings.

It suggests the rest of the claims should be grouped geographically with those in the Gisborne and New Plymouth regions to be decided first, between 2020 and 2023.

Under the Minister’s proposed timetable it will take 20 to 30 years for the claims to be resolved!

A separate discussion document, also seeking claimant feedback by April 24, asks whether the taxpayer funded assistance for the claims process is sufficient: up to $412,000 is available for Crown Engagement cases and up to $312,000 for the High Court.

While the Minister promised a process would be put in place to allow the public to also make submissions on Crown Engagement claims, no details have been published as yet.

With hundreds of overlapping claims, hundreds of millions of dollars in claimant funding, and timeframes stretching out for decades, it’s increasingly clear that this foreshore and seabed gravy train will never end.

These are troubling times. Our democratic nation, built on independence, liberty, and equality, is now governed by those who encourage State informants, who give legal and financial privilege based on race, and who have used their power to suspend our basic rights and freedoms – even Parliamentary democracy itself.

As we look to the future, it’s hard to shake a sense of foreboding.

*Do you believe the Government’s attempt to ‘eliminate’ COVID-19 from New Zealand is the right approach?