The New Face of Authoritarianism 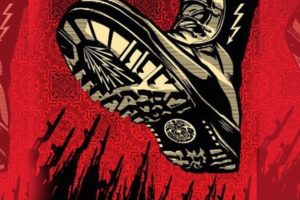 The editor of the UK Spiked On-line, Brendon O’Neil wrote, “Tyranny has had a makeover. It’s no longer a boot stamping on a human face forever. Authoritarianism is well-dressed now. It’s polite. It has a broad smile and speaks in a soft voice. It is delivered not via a soldier’s boot to the cranium but with a caring liberal head-tilt. And its name is Jacinda Ardern.”

US journalist Glenn Greenwald described our PM as the new ‘face of authoritarianism’: “This is someone so inebriated by her sense of righteousness and superiority that she views dissent as an evil too dangerous to allow.”

Jacinda Ardern is the embodiment of new-age socialism. The “team of five million” have been her guinea-pigs. But what’s actually been thrust onto the country is simply a public relations make-over of the ugly failed socialism of old, that represses freedom of expression and perpetuates failure. As a result of her ‘unfortunate experiment’, New Zealand is now more oppressed and divided than ever before.

But even someone as delusional as our Prime Minister must be sensing – and fearing – failure.

That’s certainly what the opinion polls are signalling.

The question now is how will she respond?

Indications are it will be the way of all tyrants – she’ll use the authority of her Office to repress dissent.

That’s certainly the approach she signalled in her UN speech, when she said, “The face of war has changed… The weapons of war have changed, they are upon us and require the same level of action and activity that we put into the weapons of old.”

And what is the menacing new weapon our PM believes is more “dangerous” than bullets and bombs? It’s on-line speech!

Jacinda Ardern reminded UN leaders that while the Christchurch Call was established to stop violent extremism from being shared through social media, it is now focussed on preventing radicalisation: “This week we launched an initiative alongside companies and non-profits to help improve research and understanding of how a person’s online experiences are curated by automated processes. This will also be important in understanding more about mis and disinformation online. A challenge that we must as leaders address… After all, how do you… tackle climate change if people do not believe it exists? How do you ensure the human rights of others are upheld, when they are subjected to hateful and dangerous rhetoric and ideology?”

Bizarrely, the Prime Minister appeared to be claiming that if you disagree with her policies – for instance her 2020 declaration of a New Zealand climate emergency – then you are effectively engaging in a sinister form of warfare: “The weapons may be different but the goals of those who perpetuate them are often the same. To cause chaos and reduce the ability of others to defend themselves. To disband communities. To collapse the collective strength of countries who work together.”

In her address, Jacinda Ardern indicated that she’s leading a global campaign for mass-censorship. Under the guise of preventing radicalisation through the Christchurch Call, she appears intent on undermining free speech around the globe by helping to convince Big Tech companies – including Facebook, Google, Twitter, and YouTube – to change their algorithms to suit her authoritarian agenda.

Her objectives align with what global powerbrokers like the World Economic Forum (WEF) and the UN have been advocating.

At a WEF ‘Tackling Disinformation’ forum that was held in New York last week, Melissa Fleming, the UN’s Under-Secretary for Global Communications explained what’s been going on: “We partnered with Google – for example, if you Google ‘climate change,’ at the top of your search, you will get all kinds of UN resources. We started this partnership when we were shocked to see that when we Googled ‘climate change,’ we were getting incredibly distorted information right at the top. So we’re becoming much more proactive. We own the science, and we think that the world should know it, and the platforms themselves also do.”

What this means is that algorithms are being changed to ensure that internet searches no longer give you what you want, but what “they” want you to see.

The Prime Minister and her elite cabal want to control exactly what people can see on the internet. This means it will take a great deal of determination to find alternative views, since they will be buried deeply underneath an over-abundance of orchestrated ‘news’ produced and promoted by the UN and its networks as the “only truth”.

New Zealand has already experienced this first hand with Covid. Early in the pandemic, Jacinda Ardern claimed that she was the ‘only source of truth’, and through the manipulation of social media and internet algorithms, alternative viewpoints on matters like proven treatment options used successfully overseas, were dismissed as fake news.

Through her UN speech, our Prime Minister has signalled that she now intends going much further in curating what New Zealanders can see and read – not only by paying off the mainstream media through the Public Interest Journalism Fund, but also, it appears, through controlling the internet.

Certainly, her comments about climate change – ‘how do you tackle it if people don’t believe it exists’ – indicate that the viewpoint that ‘nature controls the climate, not mankind’, will be much harder to find in the future when Kiwis begin challenging her disastrous zero carbon policies and start searching for the truth.

But is denying the availability of information on line really any different from book burnings in bygone eras – including the early 1930s in Nazi Germany?

The Prime Minister’s authoritarian censorship will not stop at climate change. Reading between the lines, is she also planning to condemn those criticising her fake Treaty partnership claim and her radical He Puapua plan for tribal rule, when she says: “How do you ensure the human rights of others are upheld, when they are subjected to hateful and dangerous rhetoric and ideology”?

While those words may be vague, we know her intentions are not.

So, here’s a question for all New Zealanders – particularly those who supported Labour at the last election: Is all of this what we signed up for when we voted Jacinda Ardern into power? Does she really have a mandate from New Zealanders to take our country down this track? We can go even further and ask, is she fit to be our Prime Minister?

The divisions that Jacinda Ardern has introduce under the guise of unity are now well entrenched, particularly on race.

An article in the Herald last month by senior political journalist Audrey Young provides an insight into how this has happened.

The Office for Maori Crown Relations was established in collaboration with Iwi Leaders in 2018 as an agency to oversee the Government’s work with Maori in a post-Treaty settlement era. Since the agency was asked by the Minister, Kelvin Davis, to operate “under the radar”, most people are completely unaware of the corrupting influence it is having on New Zealand culture.

With a primary goal of helping the Government to become a better Treaty partner, the agency has developed a “Maori Crown Relations Capability Framework”, which enables public service chief executives to establish Treaty partnership protocols and comprehensive cultural change targets for staff: “All public servants have to be attuned to the needs of Maori as Treaty partners.”

Even more sinister is the veto right the agency has over Government policy: “In 2019 the Cabinet Office issued a new circular for all ministers and chief executives to apply whenever new policy is being developed, to ensure it is compliant with the Treaty.”

Through this Office, New Zealand is rapidly being turned into a nation where a Maori world view is the only one that matters.

At local government level, the strong arm of central government is evident in a new standing orders template that requires councils to establish what are in effect co-governance arrangements with local Maori: “Iwi and hapu have a mandate based on their role as the indigenous governors of the land… An agreement could include… Mechanisms for ensuring that papers and advice going to meetings incorporates the views and aspirations of mana whenua. Such mechanisms might include the co-design and co-production of policy…”

Even private organisations like Playcentre are now controlled by Maori, with the Otago Daily Times reporting that a recent vote to change the constitution, that was supported by 366 out of 400 branches was overturned, because only 4 out of six Maori branches agreed to the change, and five out of six were needed for a consensus. Effectively, this means that under their co-governance arrangement, those two Maori votes in opposition, were able to veto 366 votes in favour.

Meanwhile in Parliament last week, Kelvin Davis, the Minister for Children, revealed that Maori MPs who disagree with Labour’s separatist agenda are considered by the Government to be ‘not Maori enough’.

Questioned by ACT MP Karen Chhour over Oranga Tamariki’s funding agreements with John Tamihere’s Waipareira Trust, following revelations the Charities regulator was investigating a potential misuse of funds, Kelvin Davis chose to insult her instead of answering: “What the member needs to do is cross the bridge that is Te Tiriti o Waitangi from her Pakeha world into the Maori world” and stop looking at the world with “a vanilla lens.”

He apologised the next day.

But rather than face disciplinary action for his racist comments, the Prime Minister thought an apology was sufficient.

This is in contrast to a similar situation in the UK where an MP who made a racist comment was asked by the Labour Party Leader to apologise and stand down, pending an investigation.

Racist insults by Ministers of the Crown – Kelvin Davis last week and Willie Jackson in May, when he called ACT Leader David Seymour a “useless Maori” – provide an insight into the arrogant superiority of the Maori elite as they pursue their agenda of political privilege and tribal rule.

It also provides an insight into our Prime Minister’s willingness to bend over backwards to appease her Maori Caucus.

“A stoush between collectivist and individualist Maori… has simmered for a long time but this week boiled over when Kelvin Davis exposed his thinking for all and sundry to examine. He confirmed that a Maori world with its own set of values exists, and that anyone with even a smidgen of Maori heritage should get themselves into it. It wasn’t a kindly suggestion. It was a command. The cost of not complying? Derision and ostracism.

“The tribe is a communistic unit. The tribe takes precedence. It owns you. Its culture is all-encompassing. It provides strength in numbers, security and identity. But it is also stultifying and limiting, depending on which lens it is viewed through. Ultimately, inevitably, whether at the micro or macro level, the question must be answered. Is your allegiance to the tribe, or is it to yourself and your chosen group of family and friends.”

Lindsay then asks, “What kind of society wants to remove that freedom? One in which the collective trumps the individual.”

Indeed, it is that collectivist future that Jacinda Ardern and her Labour Party are imposing onto New Zealand. It is the face of modern socialism.

Next year’s election will come down to a matter of trust – what do you trust more, individual freedom, or central government authoritarianism?

*Do you think Jacinda Ardern should have treated the racist remarks by her Minister Kelvin Davis more seriously?