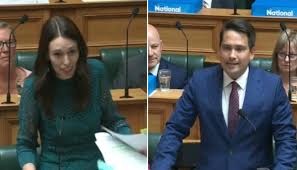 There was a fiery exchange in Parliament last week over whether Maori corporations would be excluded from any future capital gains tax.

It started when the Leader of the Opposition Simon Bridges asked the Prime Minister: “Does she agree with Grant Robertson, who is reported as saying ‘There was no recommendation in the Tax Working Group report excluding Maori from the capital gains tax’?”

The Prime Minister agreed with her Minister.

National’s leader then asked, “What does she say about Tax Working Group volume 1, page 15, headed ‘Summary of Recommendations’, which makes quite clear recommendations about exemption of Maori and report volume 2, which says Maori freehold land merits ‘specific treatment under an extension of the taxation of capital gains. This could take the form of an exclusion’?”

The Prime Minister brushed off the references saying, “What the group clearly recommended was that we engage ‘further with Maori to determine the most appropriate treatment of transactions relating to collectively owned Maori assets.’ They recommended that we think about it.”

But the Tax Working Group’s report clearly advocates in favour of race-based privilege, with exemptions from the proposed capital gains tax for Maori land and assets.

To deflect the Parliamentary debate away from a line of questioning the PM obviously found uncomfortable, she began using the ‘race card’, insinuating Simon Bridges must be a racist for raising concerns about special capital gains tax privileges for Maori: “I’d really like to question the member: where exactly is he trying to go with this issue – where exactly?”

The Prime Minister repeated her insinuation of racism: “Again, I question the motivation behind this line of questioning.”

At that stage, the Speaker stepped in: “Order! Order! The member will resume her seat. It has been a long practice in this House not to question indirectly the motivations of members in that way, and I’m going to ask the Prime Minister not to do that again. If people have specific things to say, they should say it, but indirect, implicit criticism of that nature is not acceptable.”

Through such an exchange with Simon Bridges in the House, Jacinda Ardern is now revealing her true colours. It shows that like sovereignty activists, her Government is quite prepared to use the race card to close down the questioning of racial privilege and to vilify those who challenge them.

For their part, as a result of Maori demands for special tax treatment, the Tax Working Group has also recommended extending the discounted tax rate that already applies to Maori to include “subsidiaries of Maori Authorities”, where a tax rate of 17.5 percent is being proposed instead of the business tax rate of 28 percent and a trust tax rate of 33 percent.

The Group has further suggested introducing “Te Ao Maori perspectives on the tax system”, which would include “the concepts of waiora (wellbeing), manaakitanga (care and respect), kaitiakitanga (stewardship/ guardianship), whanaungatanga (relationships and connectedness) and ohanga (prosperity)”. They would like to see Treasury incorporating these principles into the Living Standards Framework that underpins the Budget as well!

This week’s NZCPR Guest Commentator, Anthony Willy, a former Judge and Canterbury University law lecturer, has examined the Tax Working Group’s report and found that the demands by Maori for exemptions from a capital gains tax are based on a false premise. He explains:

“Conditional support for a capital gains tax has been expressed by two large Iwi Groups: Ngapuhi in Northland, and CNI Holdings Limited which is part of a Central North Island Iwi collective. The ‘condition’ is that such a tax cannot apply to any Maori person because to do so would be a breach of the ‘principles’ of the Treaty of Waitangi. If correctly reported this raises questions of fundamental constitutional and social importance…

“It was said by Dr Cullen, the Tax Working Group Chairman, in a radio interview on News Talk ZB on the 28 February that a race-based concession is necessary to avoid claims by affected Maori interests to the Waitangi Tribunal and possibly the Courts of breaches of article two of the treaty. To suggest that the design of an important, indeed historic extension to a nation’s tax system should have any regard to the possibility of future litigation is breathtakingly stupid. Tax legislation is mired in litigation. Such a proposal should find no place in a serious tax policy discussion.”

In his article Ethnic Taxation Anthony Willy explains that to navigate the potential minefield of iwi threats, it is necessary to have actually read the Treaty of Waitangi and to have understood the jurisprudence surrounding its legal interpretation. He says this would reveal that the demands by the tribal elite for special treatment based on their claims of a partnership with the Crown, are a fallacy. He believes this is especially important for the Prime Minister, who was caught out on Waitangi Day as being unable to state what the Treaty actually says.

For the record, the three articles of the Treaty, as outlined by Sir Apirana Ngata in The Treaty of Waitangi – the book he wrote for the Maori Purposes Fund Board in 1922 as a public resource to explain the Maori version of the Treaty – are as follows:

The First Article – “The Chiefs assembled including Chiefs not present at the assembly hereby cede absolutely to the Queen of England for ever the government of all of their lands.”

The Second Article – “The Queen of England confirms and guarantees to the Chiefs and Tribes and to all the people of New Zealand the full possession of their lands, their homes and all their possessions, but the chiefs assembled and all other chiefs yield to the Queen the right to alienate such lands which the owners desire to dispose of at a price agreed upon between the owners and person or persons appointed by the Queen to purchase on her behalf.”

The Third Article – “In consideration thereof, Her Majesty the Queen of England extends to the Natives of New Zealand Her Royal Protection, and imparts to them all the rights and privileges of British subjects.”

In his introductory comments, Sir Apirana Ngata explains, “The Maori did not have any government when the European first came to these islands. There was no unified chiefly authority over man or land, or any one person to decide life or death, one who could be designated a King, a leader, or some other designation. No, there was none, the people were still divided, Waikato, Ngai Naua, Te Arawa, Ngapuhi and tribe after tribe. Within one tribe there were many divisions into sub-tribes each under their own chief. How could such an organisation, as a Government, be established under Maori custom? There was without doubt Maori chieftainship, but it was limited in its scope to its subtribe, and even to only a family group. The Maori did not have authority or a government which could make laws to govern the whole of the Maori Race.”

He then explains that this was the reason “for the direct approach by Governor Hobson to the Maori Chiefs and for arranging for copies of the Treaty to be taken from end to end of each island, seeking to obtain the concurrence of chief after chief…  512 Maori Chiefs subscribed their marks or their names to the Treaty of Waitangi.”

The fragmentation and conflict that characterised New Zealand’s early occupation, is of course, why the former Attorney General and Chief Justice Sir James Prendergast in the 1877 judgement of Wi Parata v Bishop of Wellington outlined the situation in the following way: “The title of the Crown to the territory of New Zealand was acquired by discovery and priority of occupation, the territory being inhabited only by savages. The Treaty of Waitangi, so far as it purported to cede the sovereignty of these islands, was a nullity.”

In other words, as Anthony Willy explains in his article, in the context of judicial interpretation, the Treaty of Waitangi is a “nullity” at international law, since a “treaty” in the legal sense, can only be made between states exercising sovereign powers over their lands. Since that was clearly not the case in New Zealand, the Treaty of Waitangi was in fact a simple contract between the Crown and the separate Maori tribes.

He reiterates the fact that claims of the existence of a Treaty partnership between Maori and the Crown are based on a “false premise”, since it is constitutionally impossible for a partnership to exist between the sovereign and the governed.

In particular, he specifically refers to a recent judgment of the Supreme Court in 2014, which confirmed that no such partnership between Maori and the Crown exists: “Emphatically there is no partnership as known to law and no private direct fiduciary relationship between the Crown and a subject, merely one which arises by analogy. And crucially these duties arise only in relation to interpretation of the contract signed in 1840 – they have no wider significance as is now well understood. All people claiming some Maori inheritance are entitled to the sum of the rights enjoyed by any other New Zealand citizen no more and no less and each and every one of them is subject to the laws of the realm including the decisions of the Courts. Attempts by the Waitangi Tribunal to subvert what is plainly the law does that body no credit. It is on the ignorance of the legal standing of the Treaty that the Tax Working Group makes is novel and legally unsustainable proposals.”

This is a very serious matter for New Zealand. The whole spectrum of special Maori rights – including powerful co-governance rights – is a massive deception built on the false premise of ‘partnership’ touted as law.

The reality is that the Treaty of Waitangi was a contract between Queen Victoria and Maori tribal leaders, which established the Queen as our sovereign, protected private property rights, and gave Maori people the same rights and privileges of British citizenship as every other New Zealander.

The Treaty did not elevate Maori rights above those of other New Zealanders, nor did it form the basis for a ruling class of tribal elite – in spite of this being the common objective of shrewd sovereignty activists colluding with sympathisers within government.

But if the Prime Minister has not read the Treaty nor the accompanying judicial interpretations, on the issue of race-based rights, how can we trust her judgment?

The reality is, that based on her track record in Office, her judgement cannot be trusted. Just look at her disastrous unilateral decision to close down our crucial oil and gas industry – without Cabinet approval and without informing the sector – in order to look good on the world stage.

Is our PM about to force another disaster onto the country – this time in the form of an unpopular capital gains tax that will have a negative impact on the majority of New Zealanders? And if she does decide to impose such a tax, will her Government – including Winston Peters – reinforce the ‘partnership’ deception through tax exemptions based on race?

The answers to these important questions should become clear next month when the Government delivers a formal response to the Tax Working Group’s proposals.

Please spread the message that anyone concerned about a capital gains tax should share their views with the PM and Government MPs now, before they have made up their minds on whether the tax should go ahead – their email addresses can be found HERE.

Do you support capital gains tax exemptions based on race?