Bruce Smith is the Mayor of the Westland District Council and Chairman of the West Coast Civil Defence.

Here is the Westland District Mayor’s Three Waters journey – as at 3 July 2021.

I have been asked by number of journalists to comment on the proposed 3 water changes. I haven’t done so at this stage because to explain my view needs time.

This is my journey with three waters so far.

Government starts by legislating a water regulator and makes it mandatory to enforce the standard that Govt has decided upon for the supply of drinking water.

It is basing its’ decisions on the Scottish water model.

This is where I saw the first crack appear.

The regulator must ensure that all users of water get the same treatment across New Zealand.

It’s again a one-size-fits-all for everybody that uses water, no matter if you are rain fed or aquifer fed. A big difference Coasters.

The question of what it will cost ratepayers has not been considered as a priority.

Would a bronze or Silver Plate model have been a better first step.

The regulator has already indicated he has the power of enforcement, and he will use it. I wonder what that means?

Some months back, government announced a one-off payment with no strings attached, costing $740 million across New Zealand, to stimulate the economy during the covid recovery period.

All the councils had to do was supply government with a full analysis of its’ current three Waters assets and programmes.

Councils also had to spend the money on three Waters assets.

In Westland we received more than Grey or Buller because of the percentage of stewardship land in Westland, an acknowledgement of the inequity to our rating base caused by non-rated DOC controlled land. That’s 87% of the land non-rated.

A further carrot was dangled described as tranche 2 that would go to those councils that decided to join the Masterplan for centralised control of water.

At that time one concept being promoted was several companies supplying all of the water in New Zealand who get ownership of all of the councils’ three water assets.

As at the 3rd of July the tranche 2 payment seems to have gone to ground.

So, all councils had to do was supply the information to the Department of Internal Affairs. There were very tight timeframes for the supply of information over Christmas 2020.

Then came a series of rushed meetings around the country.

The key message from governments PR team was “we have proven the case for change”.

PR spin at its very best.

At every meeting I’ve attended the only thing raised as a key PR message is we have proven the case for change.

Several Mayors sought to raise questions or concerns and the standard answer from DIA was that we can’t answer that as it’s before cabinet at present.

From day one the government’s position has been participation is optional, and every Council took them at their word.

How many entities would there be?

How would they be governed?

Where were Iwi in the discussions and how did they fit into any structure?

What would the balance sheet implications be and how would the moves impact on local government in the future?

Government advised councils the three water assets owned by each council would be transferred into one of the operating entities.

Councils would receive cash to retire any debt and its remaining assets would be transferred with no compensation.

Government maintains councils would still own the assets via some form of joint ownership of the three water entities, however there would be no shareholding and there would be balance sheet separation, and the new entities would then borrow up to $160 billion to fund their activities using the three water assets from Councils as security.

Government maintains the transfer of assets and the borrowing of $160 billion will increase GDP and of course they are correct. A huge stimulus all built on borrowed money and all paid for by the water users.

That is more than the total Government net debt at present.

Let’s talk about Westland District Council, as it’s the one I know the most about.

$120 million of Three Waters assets built up over the last 100 years.

The balance sheet impact with the removal of its Three Water assets for the Westland District Council when these assets are taken, and $7 million of debt paid to WDC with the rest written off – that’s a balance sheet write off of $113 million for Westland ratepayers.

Mayors then attended a zoom meeting last week and were given embargoed releases from government, setting out their preferences.

There will be four entities that cover the Ngai Tahu Takiwai in the South Island, with Nelson and Marlborough excluded.

There will be three entities in the North Island.

Government’s proposed governance structure takes all decisions in relation to Three Waters away from Councils and its ratepayers.

The ratepayers will be billed direct from the water company.

The key message from the government PR team remains, “we have proven the case for change”.

Then on Thursday the Mayors were given access to each Districts figures by DIA.

What is clear is that every New Zealander will pay heavily for a gold-plated water standard, decided by government. And affordability has not even been discussed.

The governance structure has been proposed as 50% councils who have put in 100% of the assets and 50% Iwi, an unusual situation to say the least.

Government has proposed that the four water companies will be up and running by July the 1st 2024.

As I said at the beginning, the proposed reshaping of our Three Waters is based on the Scottish model.

No consideration at all of other options, or the risks of the proposal to a system that has worked, all be it not perfectly, for decades.

There has been no consideration about how our New Zealand districts will feel about their hard-earned assets being taken by government without compensation.

I want to move now to the unwise attempts by the government to influence the outcome of this discussion by spending $3.5 million on that ridiculous add which would have been better aimed at our kindergartens.

The Mayors collectively wrote to Minister Mahuta asking her to withdraw the ad which was considered inaccurate and insulting. The answer, a firm no.

Let’s have a look at the advertisement (click to view). 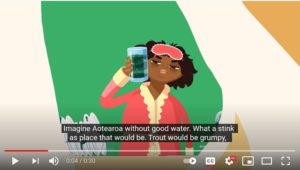 This discussion is about drinking water in the first instance, however in the add the assumption is we don’t have good water and that’s simply not correct in most parts of New Zealand.

“The imported trout will be grumpy, a sad sight to see”. Catch him and cook him I say.

Up until now this entire proposal has focused on clean drinking water, where did dirty ducks and imported trout come from

“Manus won’t be clean…” what on earth does that mean in the context of this discussion.

“Unable to have a shower…” really, what part of New Zealand are you talking about here?

Clearly it’s not the West Coast. This type of nonsense is not even OK to feed to our kindergartens.

The $3.5 million would have been better deployed to pay redundancy to the ever-growing public relations team that works for government.

Now let’s look at the information for each district just released by DIA on its website. Government says that in Buller the current cost of three Waters is $1,620 per user per annum.

Government says that with reform the cost to each Buller user will be $1,640.

Government says that if there was no reform this goes to $8,698 per user per year.

We move on to the Grey District where the government says of the current cost of Three Waters is $1,160 per user PA.

With reform the three waters cost will rise to $1,640 identical to Buller.

With no reform Government says the cost will be the same as Buller at $8,690 per user PA.

And then we move to Westland where governments say the current cost of three Waters is $2,140 per year per user.

With reform the bill from the water regulator will be the same as Buller and Grey $1,640.

With no reform after going through all of the numbers, guess what, it’s $8,690 PA per user, the same as Buller and Grey districts.

I’m not surprised. My take at present is the bar has been set far too high by government for the regulator and New Zealand won’t be able to afford it. In reality it will add $160 billion to the country’s debt which is more than the current net government debt.

There has been a concentrated effort to sell the positives of this scheme with no effort to establish and discuss the risks and the increase in water charges that will arise.

The ratepayers of each district on the coast will struggle with the concept of having their assets taken and being billed with large increases from the water regulator. Bills they will have no control over, where at present elections bring about accountability.

Here’s where I see it at present, nothing has been put to our council seeking any form of decision.

I doubt if I will be able to put my hand on my heart and try to sell this proposal to my councillors, but more important to our community, as you are the owners of the assets and will pay the increased cost of water via bills from the water regulator.